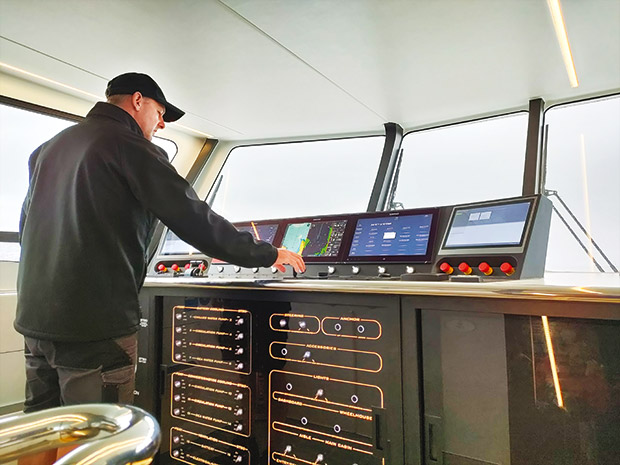 Ika Rere, Wellington’s new ferry, undoubtedly makes a statement with its turquoise livery, but it’s also the first fully electric ferry in the entire southern hemisphere, according to Jeremy Ward, the managing director of East By West Ferries.

From late March, Ika Rere will join its two diesel-powered stablemates shuttling commuters from the Queens Wharf in the centre of Wellington to Days Bay across the Harbour. Why was a Wellington-based ferry company the first to go fully electric?

“A bit of madness, really,” says Jeremy. “We’d been thinking and talking about it for years. In the next five to 10 years, you will see a massive change in the electrification of transport. We decided to be an early adopter.”

The 19-metre carbon-fibre commuter ferry was built by the Wellington Electric Boat Building Company (WEBBCo), a subsidiary of Easy By West. It was locally designed, with much of the technology onboard also locally sourced. Able to carry up to 132 passengers, Ika Rere is a third larger than its sister vessels and a remarkably smooth and quiet ride in comparison.

As the ferry travels at low speed out from Queens Wharf, the motor is barely audible, just the sound of the hull slicing through the water. Then a surge of power brings the ferry up to its cruising speed of 19 knots with none of the vibration or diesel smell of conventional ferries. 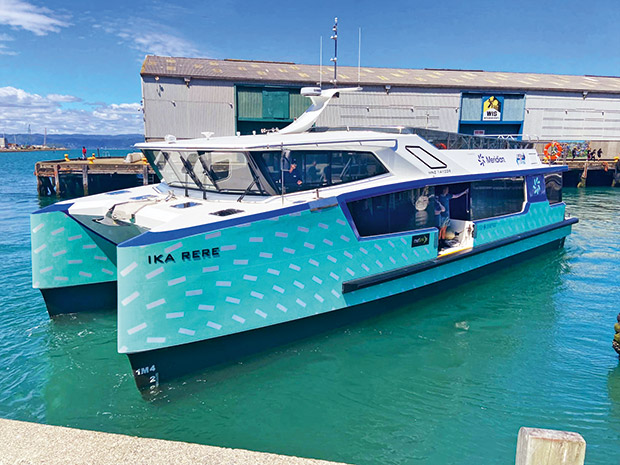 Ika Rere’s futuristic bridge features a bank of screens where the skipper can monitor battery levels and the power output of the motors. The technology has required a new skill set to be learned, but the payoff for East by West will be significant.

“With diesel engines, you are changing the oil and doing maintenance on them full time and they need to be rebuilt every 15,000 to 20,000 hours of use,” says Jeremy. “With the electric motors, you don’t even touch them until 50,000 hours.”

Then there are the emissions savings. East By West’s two existing ferries consume about 250,000 litres of diesel between them each year. Ika Rere is charged up using electricity produced from renewable energy supplied by Meridian Energy.

A charging station on Queens Wharf that looks like an oversized diesel bowser supplies 325 kilowatt hours of charging capacity, which can fully recharge the battery in 1.5 hours. Within a year, East By West plans to boost capacity to 1.25 megawatts, which would allow recharge of the battery in 15 minutes, enough to power back up between sailings. 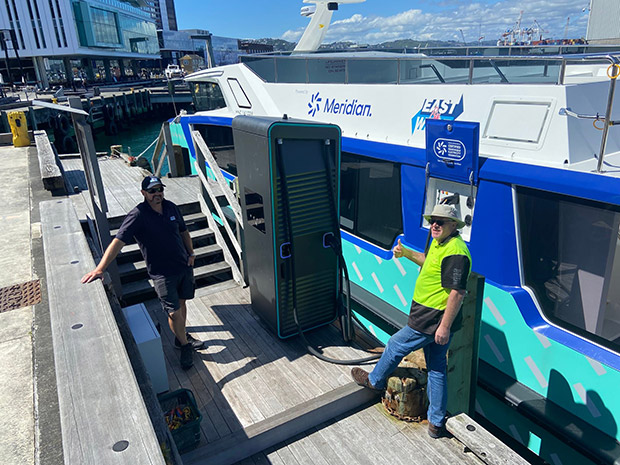 “At 19 knots with a full load of passengers, we would probably use 45 per cent of the battery capacity in one sailing. If you run it at 10 knots, you only use 10 per cent,” says Jeremy.

Designing and building Ika Rere wasn’t cheap — about $8.5 million. That compares with $3 million for a new diesel-powered aluminium ferry. But Jeremy expects the investment to pay for itself after seven to eight years of operation and has ambitions for expansion that could see WEBBCo eventually building four or five ferries a year.

“Just about everyone in the ferry business has been to see us,” says Jeremy. “All eyes are on us to see how it goes.”

“From our experience, setting up the electric-charging infrastructure is almost as complicated as building the boat. You have to adapt it for the service you are operating.”

“[Transdev] Sydney Ferries has been in touch, as has the New South Wales government, which is considering setting up a ferry from Botany Bay. There’s huge potential for these ferries across New Zealand, Australia and the Pacific islands.”

“We are planning an electric ferry service to the Miramar Peninsula and airport from the CBD, a trip of less than 20 minutes. It could make a huge difference to congestion in the town.”

$8.5 million — the cost to develop the new fully electric ferry

250,000 litres — diesel that will be saved when East By West Ferries converts its entire fleet to electric

1.25 megawatts — electric-charging-station capacity that will allow Ika Rere to be recharged in about 15 minutes