What is your chicken trying to tell you? A guide to poultry signals and hen clucks and cackles 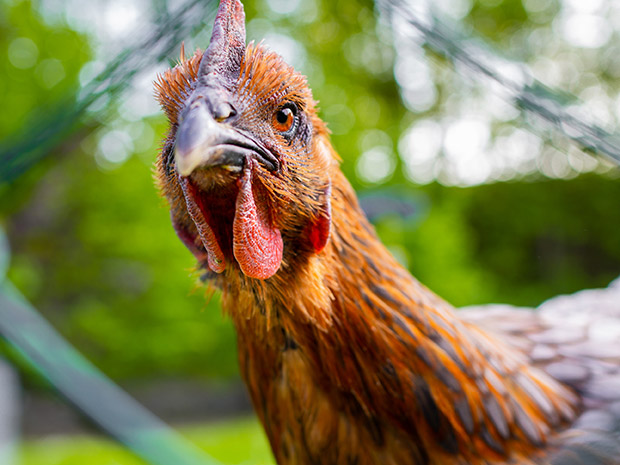 You might hear ‘book book book’ but your flock has a lot to say, and they can be pretty sophisticated gossips.

Poultry make a variety of sounds to communicate with each other, somewhere from 24-30 depending on the scientist. Once you can identify the noises and their meanings, you’ll be better able to identify what is normal and what might mean trouble in your flock.

Birds aren’t limited to sound though. They also communicate using posture – head up, head down, tail up, tail down, feathers spread, wings flapping – but what they’re ‘saying’ can mean different things depending on context.

These are pretty similar noises to those humans make and can all mean a bird is unwell. 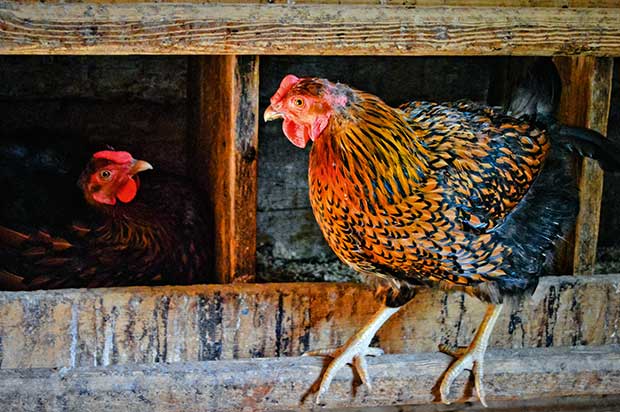 There may be a variety of causes, from something minor like a bit of dust in their nasal cavities, to a parasitic infection with gape worm in the throat, to a full-blown viral infection of the lungs and air sacs.

This is the usual talkative sound you’ll hear when a relaxed bird is wanting food, or looking for a nest to lay an egg.

This is the soft alarm sound when a danger is perceived. It can become more strident when the danger recedes, as if they’re saying “phew, we escaped that one, stand down.” You’ll also often hear it when a hen has finished laying and is leaving the nest. In the wild this would be an alert to call the resident rooster so he could escort the hen safely back to the flock.

4. A CRY OR SCREECH OF FEAR

You’ll often hear this when you pick up a bird which is unaccustomed to being caught, and it may continue until you put her down again. A cry of pain is similar to the alarm call but is usually only a single squawk. It is most commonly heard when a bird is picked up or when a feather is pulled out.

5. HOW THE BOYS IMPRESS THE GIRLS

Dr Carolynn ‘K-lynn’ Smith is an ethologist (someone who studies animal behaviour) with Macquarie University in Australia. She has studied the communications of chickens and says they are quite sophisticated in how they ‘speak’ to each other.

“Let’s take the example of what happens when a male finds a high-quality food item in the presence of a female.

He starts by giving a series of staccato calls and bobbing his head up and down, using his beak to point towards the food. He’ll often pick it up and drop it repeatedly, suppressing the urge to eat the tasty morsel.

“The female usually responds by approaching and taking the food from him. Why should a male give up food for the female? The reason is that females prefer to mate with the male that provides the most food. 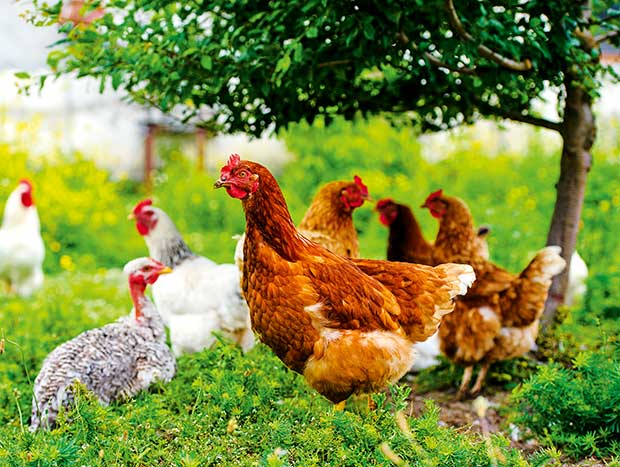 “As an aside, females eavesdrop on the male’s interactions with other females and remember which ones are the best providers overall for the whole group,
not just for her.

“Subordinate roosters often just do the visual display without making a sound. The hen sees the display, recognises that the subordinate has food, and takes the food from him. This sneaky behaviour allows the subordinate to feed a hen while avoiding punishment from the dominant male.

“Some males will call and display when they haven’t found food, ‘hoping’ that the female will still approach him. He can then court her (using a display called waltzing) or even attempt to force copulate with her (not everything in the chicken world is nice). So females also remember which males call without food and stop responding to them. This shows that females track the male’s reputation for honesty.”

These can differ according to the perceived threat, and research into alarm calls has revealed that chickens are actually pretty smart.

A call to warn of an overhead threat like a hawk will be different in intensity to one that warns of a dog trotting past outside the run or a person approaching.

Researchers testing a flock’s response used rigorous procedures to make sure the birds were reacting as naturally as possible. They recorded different warning calls and made videos or high resolution animations of predators, then played the audio and visuals to test what the birds would do.

What they discovered was that calls are specific to the danger.

The call to warn of a ground-based predator like a fox (or a human) is a clucking sound and very different to the high-pitched “eeeee” used to warn of a hawk flying overhead. 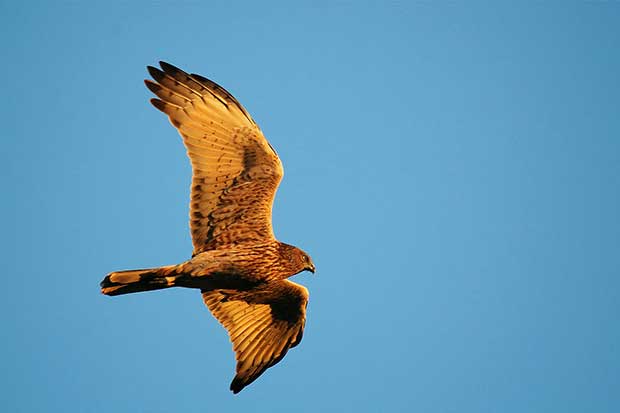 Birds which didn’t see a predator but heard the warning call responded in the same way as the bird that did see the predator by hiding or taking cover.

The scientists also found birds would choose whether to sound an alarm or not depending on the situation.

For example, a dominant rooster or a hen with chicks was more likely to risk calling out to warn of an aerial predator, versus a bird which had little to lose. Males were more likely to call out if they assessed that it would bring a rival male to a predator’s attention.

More stories you might like:
8 things to know about possums (and how to catch one with a soft leg-hold trap)

These may take the form of a low growl, often from a broody that doesn’t want to be disturbed; when a bird objects to being shuffled along the roosting perch; or if another bird intrudes on their dust bathing routine. 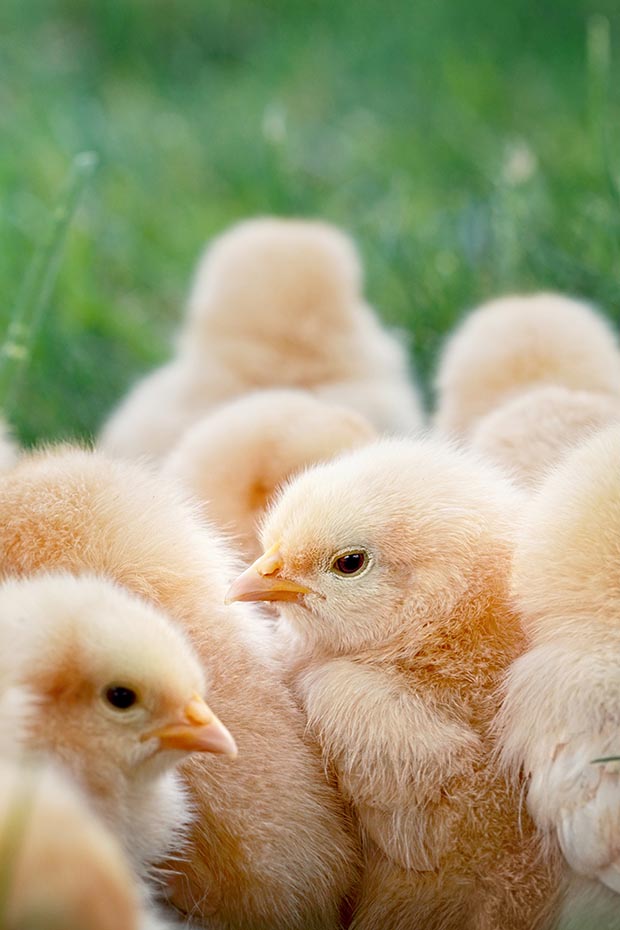 These noises can be heard when the birds are roosting and going to sleep and then hear or see something which disturbs them.

Chicks make unmistakeable loud, plaintive cheeps to let their mother know they are lost or lonely. It can also mean they are cold, and is commonly heard when chicks are being reared artificially in less-than-ideal conditions.

A roosters’ crow is unmistakeable, but it can mean several things: “I’m gorgeous and you need to know it” or “I’m going to kill you” or “Wake up, it’s 3am.” Roosters defeated in battle may even crow as a parting shot, as if to say, “I’m still here!”

Sometimes a hen will start crowing.

This can happen when a hen appears to change sex, developing the feathering and ‘voice’ of a rooster. It’s a phenomenon probably caused by the over-production of testosterone, which influences the development of secondary sexual characteristics of male feathering and behaviour. 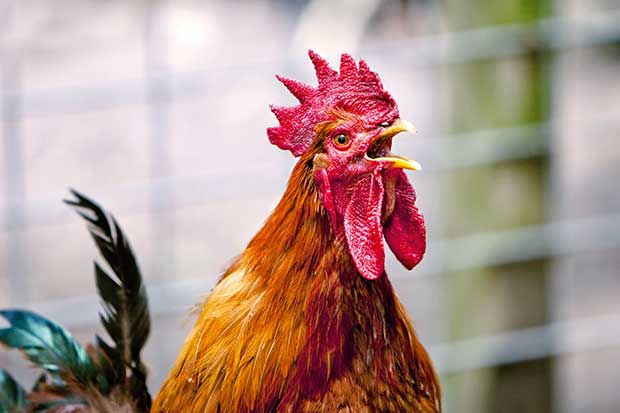 Hens have two ovaries but only one works. If she suffers regression of her good ovary, either due to a tumour or just a cessation of laying and reduction of the female hormone oestrogen, it can cause her to be more rooster-like.

This may reverse in time, and she may even resume laying. However, if the cause is permanent failure of her ovary, she will often stay in her ‘rooster’ state.

References:
Poultry signals
The Chicken Challenge: What contemporary studies of fowl mean for science and ethics