It’s worth as much as gold per gram, but fortunately it’s easy to grow.

Saffron (Crocus sativus) has always fascinated me, being both beautiful and expensive, two irresistible qualities. The flowers are bold and beautiful.  They pop out of the ground in autumn like magic, lilac or mauve with darker colour veins. But the real show stopper is the three fiery-red stigmas which carry the ‘scent of ambrosia’.

Saffron stigma and flowers were the symbol and statement of wealth and the world’s costliest spice. They were praised by poets, the petals stuffed into the cushions of the high and lofty, and saffron water was used to scent banquet halls. The yellow dye was considered the ‘perfection of beauty’ and saffron-yellow shoes were only worn by Persian kings, gods and goddesses, nymphs and vestals.

Saffron tea was a warming drink used as a digestive, but traditionally saffron is also used in cakes and buns, paella and rice dishes, in fish soups and stews such as the French bouillabaisse, a rich fish dish from Marseilles.

Today it tends to feature most often in exotic dishes in up-market restaurants. Why the hype? Perhaps, like me, you have had saffron in a dish and not been impressed. To be honest I couldn’t taste anything much at all and put it in a similar category to whitebait – over-rated for the cost (sorry to all you whitebaiters!).

Now, thanks to a little home experimentation, I have changed my mind and I hope you do too.

To the cook’s chagrin, until now we have never produced any in our garden. But now, thanks to a generous reader (thank you Ian!) and an accommodating, well-drained soil, we planted our very first saffron corms last year.

There was great excitement when Ken brought in the first few flowers from our own plot and arranged them carefully on paper towels to dry. A few petals were a little insect-chewed but who’s complaining? However, when I asked him to experiment with them he said he didn’t have enough yet and they were far too precious to waste on me!

Fortunately the cook didn’t get the last say on that matter. The first dish that Ken came up with was a delicious saffron rice salad and it was even better after a night in the fridge. After eating a bowl I felt extremely hungry and ate seconds – apparently saffron is an appetite stimulant and assists digestion as well.

Like the Moroccan fare we explored in the last two issues, the flavour is hard to put a finger on, described by some as resembling honey, but other descriptions include hay-like and metallic overtones with slightly bitter notes.

Because it is water soluble, a very small quantity in cooking will give a lovely bright yellow, which brings us to Ken’s second experiment, a gorgeous yellow saffron orange cake.

This second experiment uses ground almonds instead of flour and is by far the best gluten-free baking I have ever tasted, with the added benefit of it being good for you. 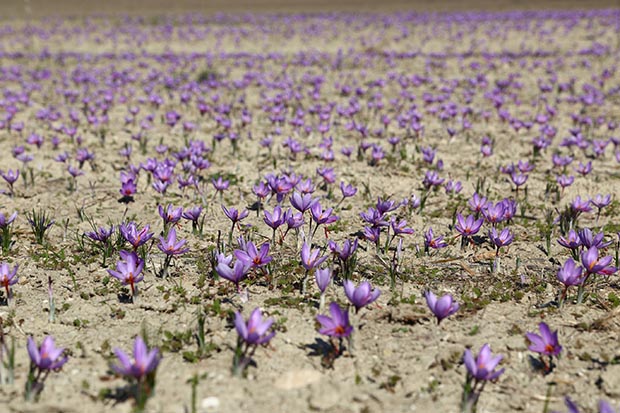 1. Luckily for us here in Canterbury, we have what saffron likes: winter chill and warm, dry summers. Sorry to those of you in Auckland and Northland, but you might be out of luck. Research by Crop and Food in the 1990s found this Mediterranean native grew well in areas south of the Waikato in the North Island and on the east of the South Island (where we are). Good frosts down to -10°C and occasional snow were no problem for it.

2. Saffron prefers light, friable soils with a sandy or loamy texture and a high nutrient content, but the most important criteria is that the soil is well-drained. Corms are often grown in raised beds to improve drainage.

3. Saffron is sterile and does not set viable seed so crops must be grown by corm multiplication.

4. Plants corms in late January or early February for harvest in April and May. Place 10cm apart and 10-15cm deep, preferably in raised beds for increased drainage.

5. Planting depths and distances vary commercially but more daughter corms are produced in shallower plantings. Provide a free draining soil with plenty of organic matter. You can side dress them with compost too but don’t overdo it.

6. Depending on the size of the mother corm, each corm will be replaced by 1-10 new cormlets. Each original corm above 30g will produce an average of six new corms in its second year. These increase in weight each year and grow above the old ones, creeping towards the soil surface by 1-2 cm each year. Eventually corms become overcrowded resulting in decreased yields so growers usually lift them periodically, about every four years in commercial plots in Spain.

7. Beds should be kept weed-free – if you are a lazy weeder like us, a layer of sawdust helps with weed control.

8. Saffron flowers in its first season, about 40 days after planting, and continues for 30-40 days depending on weather. The mauve flowers often appear before the leaves, but may come at the same time or after. Each plant may flower for up to 15 days but once flowering starts you need to keep a close eye on them, picking  flowers in the morning before they wilt.

9. Rain (or irrigation) 10-15 days before flowering results in high production; drought will cause small flowers and stigmas.

10. Harvest flowers by pinching off at the base with the fingernail, or with a slight twisting movement. They are best harvested in the morning after dew has evaporated. In Italy flowers are harvested very early in the morning while still closed and the stigmas are easier to detach. It is possible – but tricky – to harvest the stigma without picking the flower.

HOW TO HARVEST AND DRY SAFFRON

Flowers should be dried as soon as possible after picking. If you can’t dry them straight away keep them in closed containers in the fridge. The aim is to achieve about 10% moisture. Drying time will vary with the humidity, quantity of threads, dehydrator model (if you’re using one). With a small domestic dehydrator, about three hours at 48°C should be about right. 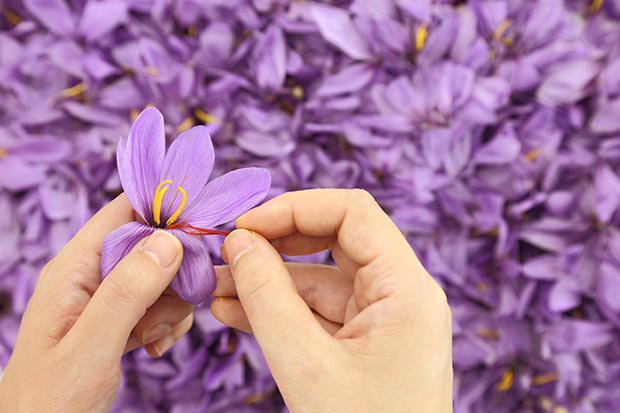 Brightness of colour is aided by quick, high temperature drying. With care you can use an oven, as we did. Experiments show that stigma can be dried at up to 110°C as long as the timing is right (at 110°C, just two minutes is needed).

Well-dried saffron should be a glossy, dark red colour. If you bite on the thread it should have a waxy feel. Over-drying makes threads brittle with a bitter aftertaste. Not dry enough and they will be prone to rot.

Dried stigmas should be stored immediately in an airtight container in the dark to avoid bleaching.

IS YOUR SAFFRON GOOD OR BAD?

Picrocrocin, a bitter tasting principle, hydrolyses on drying to glucose and safranal. The best quality saffron has a high safranal content.

Good saffron is a fresh, bright orange colour and smells strongly sweet and pungent. It can be substituted with similar coloured herbs such as safflower, turmeric and marigold but it completely changes the flavour. When old it becomes dry and musty so don’t save it up for too long!

WHY IS SAFFRON SO EXPENSIVE?

● Weight for weight, saffron is more valuable than gold, making it easily the world’s most expensive spice. In Minoan culture (1900-1600BC) the same weights to measure gold were used to measure saffron.

● Once you start picking and experimenting with saffron you quickly see why it costs so much. Our first year’s harvest from two plots yielded less than a dessertspoon of stigmas.

● Each dried stigma weighs between 0.3-1g. To make up a kilogram of dried saffron requires the sacrifice of between 70,000 and 200,000 flowers, depending on their quality. Put it another way, a kilogram of flowers might yield just 12g of stigmas.

● Yields vary greatly in different growing conditions ranging from 2-2.5kg per hectare (Morocco) to 29kg per ha in Spain under irrigation. Research in NZ (in Clyde) showed yields of 24kg/ha.

HOW TO USE IT

Less is more – too much and the bitter taste overpowers the subtle flavour. Just a pinch of saffron will colour and flavour 500g of rice.

Generally, the dried threads are infused first by adding to warm water, milk or cooking liquor. They can also be crumbled dry into food.