A feijoa glut doesn’t have to mean a predictable chutney. Add some warm spices, keep it classic, or try a skins-on variety. 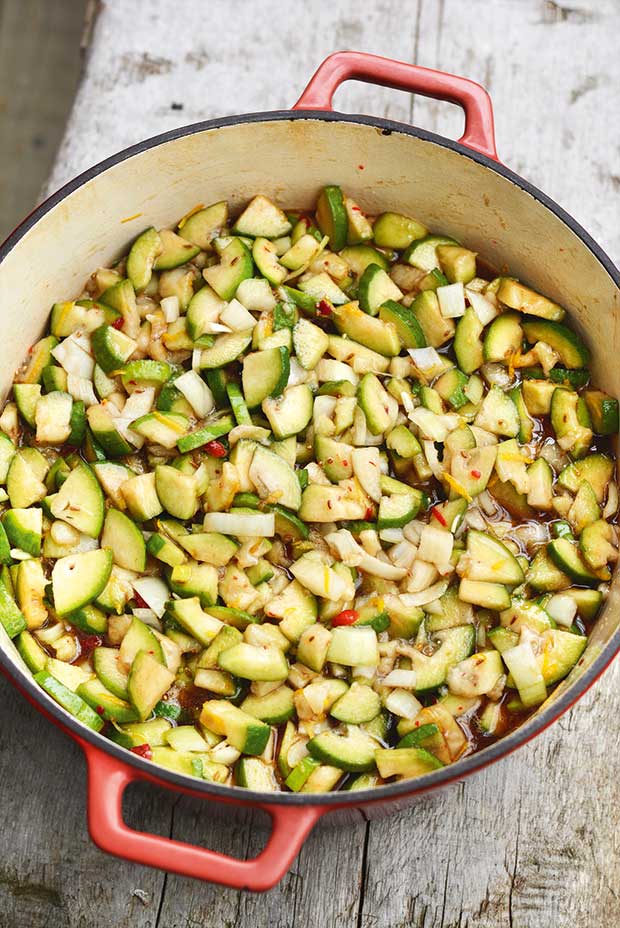 Most of the hard work is done during the soaking phase. The flavours seep in overnight to create the beautiful flavour, wickedly satisfying texture and aroma. Recipe by Kristina Jensen

The night before you make the chutney, top and tail the feijoas, cut them in half, then into quarters, then into 7-8 slices.

Place in a large casserole that has a lid (or use a roasting dish, covered with tinfoil) to keep the moisture in. Add the onion, lemon zest and juice. Chop the chillies finely (de-seed them if you wish) and add them, followed by the rest of the ingredients. Stir, cover, then let it sit overnight.

The next morning, place the casserole or dish in a pre-heated oven (180°C) and cook for 2-3 hours. Stir every half an hour. It will thicken and turn a dark-brown caramel colour.

Pour into sterilised jars and seal with sterilised lids. Keep it hidden in a cool, dark place for a couple of weeks to let the flavours really meld into each other. This feijoa chutney recipe is incredibly good with pork. Recipe by Kristina Jensen.

Combine all ingredients in a large heavy-bottomed saucepan and stir over a medium heat until sugar dissolves. Simmer for 1½ hours, stirring occasionally until the chutney gets really thick. Ladle into hot sterilised jars, then seal with sterilised lids. Store in a cool dark place for a month before opening. Keeps for up to 12 months. Refrigerate after opening. 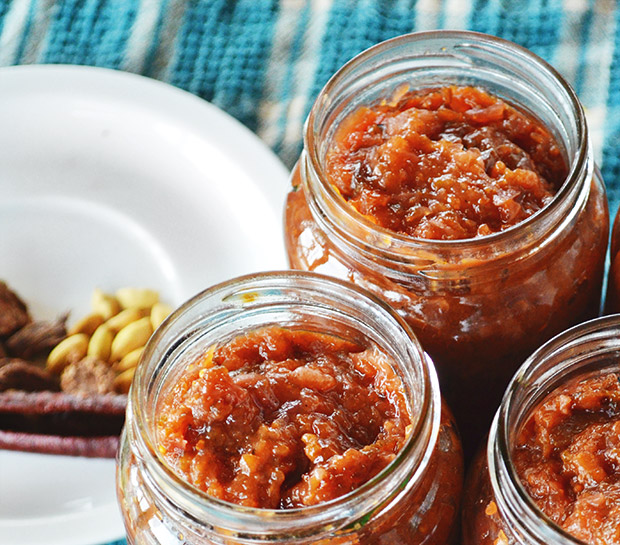 The roasting process and the mix of spices makes this an unusual chutney, with a nice smoky flavour thanks to the cardamom. The spices are well worth hunting out, at specialist food stores or online. Recipe by Jenny Garing.

The night before you make the chutney, put your feijoas (skins and all) in a food processor and whizz them up until you have a lumpy mix, not a puree. You’ll need to do it in batches for this amount of feijoas.

Do the same with the red onions and the lemons – cut the lemons in half and flick out the pips before you whizz them.

Remove the stems and seeds from the green chillies and slice finely. Mix the sludge of feijoas, lemons, onions, and the chillies in a large bowl. Add the salt and vinegar and mix slightly, then add the sugar. Cover the bowl and leave it on the bench overnight.

The next day, preheat the oven to 180°C. Give the mixture in the bowl a good stir, then add the cassia, cardamom, and chilli flakes. Pour this into a large roasting dish and cook for 2-3 hours. Stir it every half hour or so. It is cooked when the mixture is reddish-brown and most of the moisture has evaporated.

Take out the cassia quill and cardamom pods. Pour the chutney into clean jars, seal, and leave for at least a week for the flavours to settle and meld. It should keep for at least a year in a cool place.