Over the years, John Bristed has owned many cars, but his siren call was the fearless little lady on a Rolls-Royce bonnet.

The French have that innate style, an effortless élan. So, when a Frenchman peered from his small Citroën 2CV at John Bristed in his 1930 Rolls-Royce 20/25, raised a Gaelic eyebrow and slow smile and said, “Monsieur, I zink your car is very sharp,” John was at once startled and chuffed.

John, who now lives in Mount Victoria, didn’t think the car he’d bought on his Big OE in London was beautiful when he first spied it in Cambridge on the then-A10. He felt its only un peu de beauté was the lovely little hood ornament; that graceful little goddess, Rolls-Royce’s iconic Spirit of Ecstasy.

But John needed a vehicle, and it cost only 150 pounds — just the thing to drive a bunch of mates down to The Prospect of Whitby, their East End local. John always flipped the local kids a couple of shillings to keep an eye on the car while they were at the pub and make sure no one helped themselves to the Flying Lady. It was a lot of fun as a London runabout but generated a bit of teasing as he parked her outside his work at the BBC in Bush House. The Spirit of Ecstasy is not the only lady to ride with John. His dachshund TipTop loves to ride in the Rolls — or any car for that matter — but this is her favourite.

The Rolls-Royce 20/25, an upright two-door so-called “doctors’ coupe”, was the carmaker’s entry-level model, and its popularity is said to have helped the company survive after the 1929 sharemarket crash.

And talking of crashes, John’s new purchase had a “crash” gearbox, that is, a gearbox with no synchromesh; if the driver didn’t get the gear speeds right, they graunched when changed. With experience, John could switch gears “by ear” without using the clutch even.

“But when I left England, I didn’t want to take it with me. I tried to get a prettier one — bodies are everything in these cars — but had only 250 pounds to spend, and the very pukka English gentleman whose pretty car I fancied wanted 275 pounds, no bargaining. Once home, I thought wistfully, ‘How nice it would have been…’”

There were other cars in the interim, but a Rolls-Royce was always in the back of his mind. And then one day, John spied another 20/25; a beautiful one, right there in Wellington. He came across it again, years later, on the other side of Wellington Harbour in the seaside suburb of Eastbourne. It belonged to an elderly gentleman, but when John asked if he were prepared to sell it, he got an emphatic “Never!” That sounded pretty final. But the very next day, John got a phone call and an expensive proposition, which he accepted “before anyone else got it”. The car, built in 1934 and complete with synchromesh on third and top gear, was now his. Although when he realized its state — a cracked cylinder head and the motor’s lubrication being a fine mix of oil, water, and grit— he realized he’d paid an outrageous sum.

Enter Stuart MacDonald, an ex-RNZAF engineer who was happiest deep in elbow grease and loved everything Rolls-Royce, even if it wasn’t affixed to an aircraft, who begged to work on the car. He got the job. Nearly 50 years after RR built the car, it was hard to get reliable information about it; there was no instruction book and little on the internet.

However, there was a rising interest in restoring old vehicles in England, and John found someone was making new cylinder heads and managed to import one. He also installed a proper full-flow oil filter as RR provided only a strainer, which was insufficient. He found another clever fellow in Auckland who could rebuild an RR radiator, and eventually, the engine was purring.

Oh, but her body was in disarray too. Although Rolls-Royce made the chassis, motor and famous radiator, the frame was wood, and the handmade aluminium body was built on that frame by bespoke bodybuilders, in this case, the prestigious firm of Thrupp & Maberley. 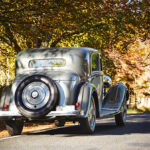 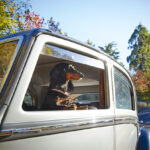 Stuart removed the body to find the chassis beneath was sound, but that lovely bodywork’s wooden frame needed serious work. With a bit of searching, John found Ray Larsen, a bodybuilder craftsman in Invercargill.

John and Stuart loaded the body onto a trailer, then took turns driving the bare Rolls-Royce chassis, with two seats sitting on it, from Wellington to Invercargill. While one drove the chassis, the other drove John’s everyday car, which hauled a trailer with the Thrupp & Maberley body perched on top.
These days, they wouldn’t have made it out of the driveway like that. They got a few laughs; they had a few laughs. Possibly, people still talk about the time two chaps driving nothing but a chassis passed through town.

It took the best part of a year for Ray to repair the body’s underlying woodwork using Southland Beech. To John’s admiration, he finished it with a “superb” paint job and then replaced the upholstery. But it remains a work in progress. “There is always something to do with a vehicle as old as this,” says John, whose varied career in journalism, manufacturing, and publishing (he is currently “general factotum” at Wellington’s Capital magazine) sometimes had to come before tinkering with the car. 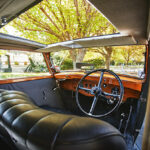 Southland beech is perfect for the trim and dash of John’s Rolls-Royce 20/25, replacing what would probably have been malabar teak, which was used a lot by the luxury carmaker. 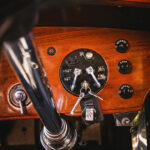 “As well as the work on the motor, over the years we’ve overhauled or replaced steering, the fuel system, springs, clutch, water pump, distributor, front suspension, shock absorbers all round, the auto lubrication system and more,” he says. John’s Rolls-Royce moves about a bit; she shows up at weddings in both islands carrying her fair share of brides and has attended many special parties. She is the perfect art deco vehicle and has turned heads at several of Napier’s famous art deco festivals.

On the way back to Wellington from Napier after the “very enjoyable” recent February Art Deco Festival, John stopped in Paekākāriki. A man on the footpath asked him if he ever got sick of people saying “omigod”.

John asked him what he meant, and the man replied, “I looked at your lovely car and thought, ‘Omigod’. I imagine lots of people say it to you.” “I thanked him,” says John. “Lots of people like her, but I’d never heard anyone say that before.”