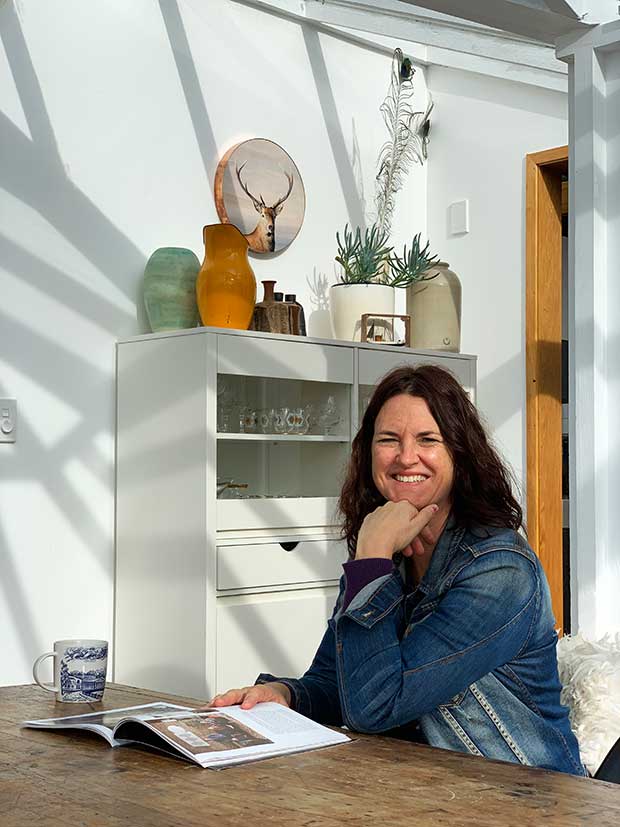 Jane Blackmore has been painting in oils for 25 years. Her work is well-known to fans of her landscapes, seascapes and florals, but Jane is anticipating a move.

Jane Blackmore’s commute from her coastal cottage to her seaside studio must be one of the country’s most picturesque.

For 10 minutes she zips along in her beloved 1300 Austin, the khaki-coloured car matching the pohutukawa trees lining her route until she gets to the Shelly Bay studio that she shares with fellow artist Juliet Best.

“When I first came to Wellington 15 years ago, I remember driving around here – even before I thought about moving to Wellington – and thinking, ‘I’m going to end up living here. It feels like home’,” she says, sitting at her Worser Bay kitchen table. 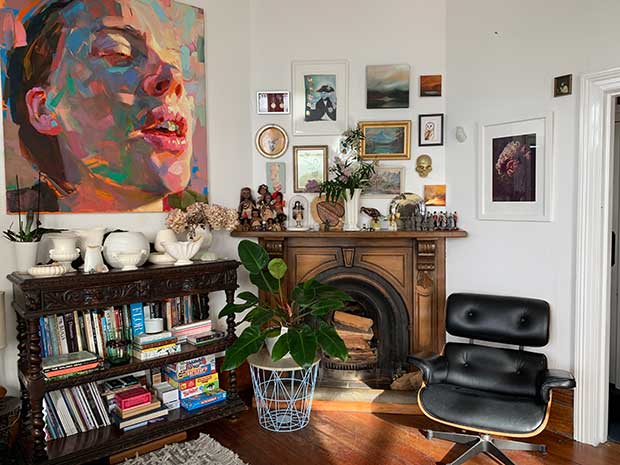 “There was just something about Wellington and the eastern suburbs. I felt totally at home. It was just perfect.”

While Jane says she doesn’t take direct inspiration from the sea view across to the Remutaka Ranges, her oil paintings are generally landscapes, “lakescapes” and seascapes, or more latterly florals; abstract in moody colours and blended brushstrokes.

She’s been painting in oils since she began exhibiting at 20. But that was as an amateur; Jane’s profession then was cooking, having qualified and excelled as a chef. 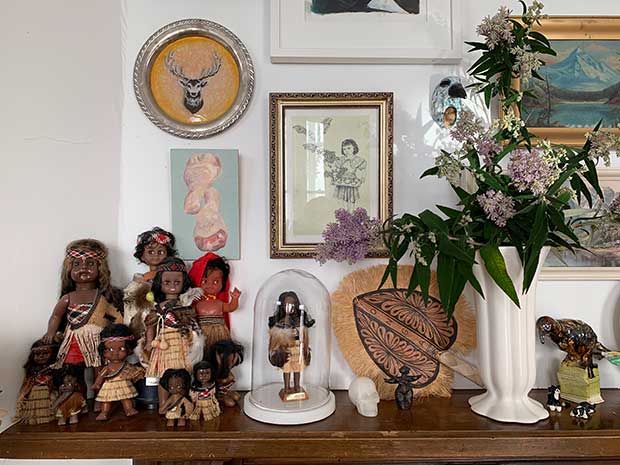 “I’ve always wanted to be top of my game, and at that time, my game was to be a celebrity chef – the whole thing enthralled me. I was working in London, and my boss took me to Gary Rhodes’ restaurant, and I met him. I was star struck.

“But I wasn’t a party girl, and I couldn’t keep up. Then one of our chefs had a heart attack – he was on the ground in front of me – and I was told to keep cooking, even as I rang for the ambulance. That was a turning point for me…” 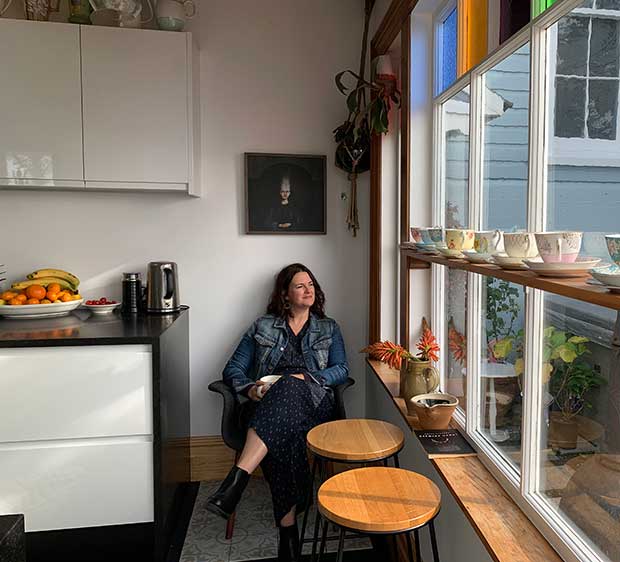 Back in New Zealand, Jane spent a few years “pottering” in Nelson where she had grown up, working in a much more relaxed café, painting on the side.

“But I felt that I needed to study if I wanted to be successful and happy with the art I was making. So, I went to the Nelson Institute of Technology – three solid years of learning the traditional method of painting.

“It gave me what I was looking for and made me realize painting was what I wanted.” 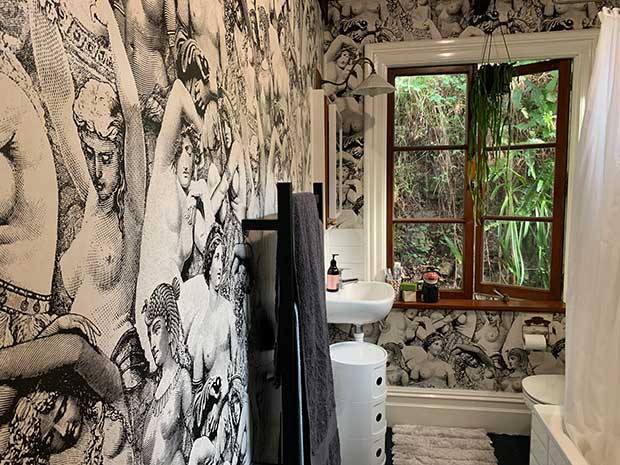 Jane guesses that the naked lady wallpaper is over 45 years old, which is why she kept it in her home remodel.

After graduating aged 30, Jane moved to Wellington and set up her studio, first in Newtown and then elsewhere in Shelly Bay before moving into her current location and combining with Juliet.

Wherever she was, Jane’s studio door was always open. “I wanted to engage with my clients, and I was getting more confident talking about my work in a language that’s my own but is inclusive of everyone. I love talking to the young couple buying their first piece of art as much as the people who have bought several of my paintings.” Jane’s sea view across to the Remutaka Ranges.

Over the years, Jane has moved from very abstract, to impressionism, to landscapes and then florals – always working from memory, or a feeling of a memory, rather than photographs.

“I’ve loved making landscapes – Lakes Wanaka and Hawea are favourites – and people have connected with them. But to keep myself fresh, I needed to jump into something else, which is frightening because if you’re known and loved for something, it’s scary to recreate your story.”

Oil paint has always been her medium. She squeezes paint from large tubes and applies to a canvas hung on her studio wall – no easel, or even much of an apron, for her. “I’m a very tidy painter,” she says. “I like making a mark. It’s such a primal thing. You make a mark, and then you intuitively make decisions along the way on how you can change that mark.”

The two-bedroom cottage Jane shares with her husband Alan Hucks and daughters Violet (11) and Olive (7) can best be described as cosy. But what the cottage lacks in space it more than makes up for in history.

Built in the 1880s, it was one of the earliest houses in the area and shows up in many historical photos of the time. Alan’s mother, Margaret, bought it in the 1970s, and it’s where Alan and his three siblings grew up. Alan and Jane bought into the house six years ago. (Margaret now lives next door in an Ian Athfield home – she also owns another Ian Athfield that clings to the cliff behind Jane and Alan’s home.) 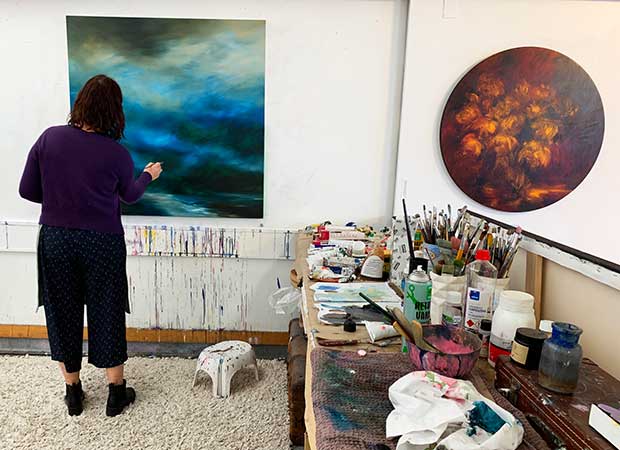 “It’s like a family compound around here,” says Jane.

“But this house has such a great feel. So many people talk about spending time here when they were young; running across to have a swim and running back, sleeping over. There’s not a bad bone in this house. It seems to be where everyone comes when they need a safe place.”

Perhaps because of that, Jane and Alan resisted the urge to remodel completely when they recently refreshed their home. While they designed and installed a new kitchen, they merely spruced up everything else, including the 40-year-old cedar conservatory and the bathroom. 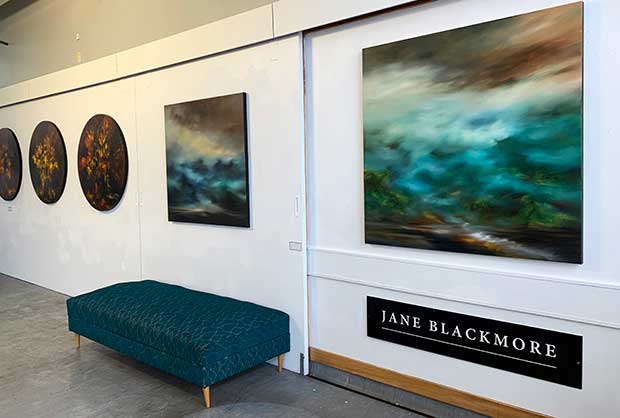 “It didn’t feel right to start knocking things down. And I wasn’t allowed to touch the naked lady wallpaper in the bathroom. That must be over 45 years old,” says Jane.

There’s plenty of art, of course; some of it Jane’s, much of it swapped with artist friends. And lots of collections – Māori dolls and toy soldiers, for example. “My husband is a collector of everything. This place is chokka,” says Jane.

Jane’s artistic brain is also chokka, and she must be one of the country’s most prolific artists, with her art available in pretty much every main centre and online. But after 25 years of painting mostly landscapes and flowers, she senses a new stage approaching. 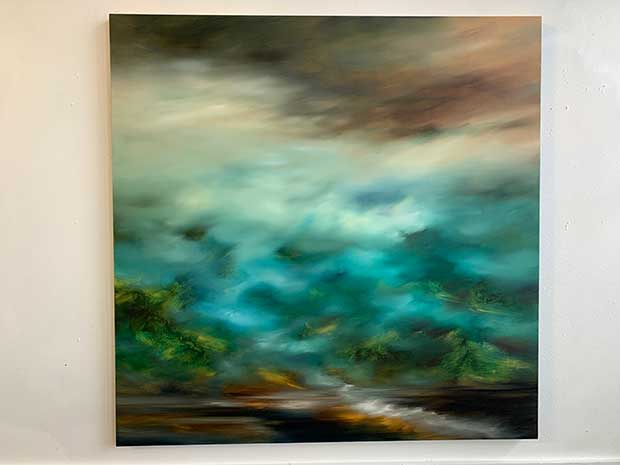 “Even with being creative, it can feel a bit like Groundhog Day, so this year I’m spending some time to think about what to paint next. Whatever that is, it’ll still be something that allows me to connect with the people who love my work. That’s the best thing.”