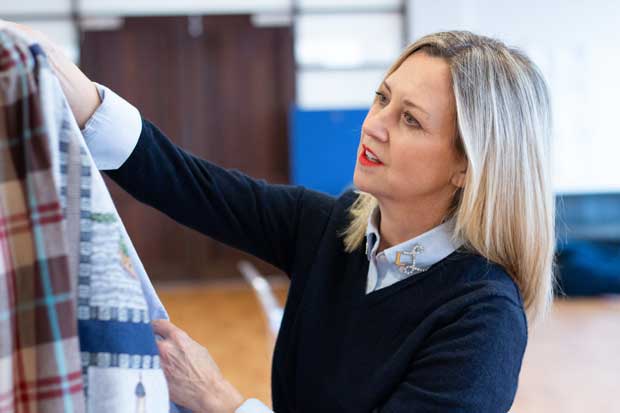 The Auckland Theatre Company’s production of Six Degrees of Separation focuses on New York’s art and fashion scene. The cutting satire, set in the 1990s, was familiar territory to United States costume designer Lucy Jane Senior who, before moving to New Zealand, worked as a stylist in New York. But the designer’s wide experience didn’t stopped her agonizing over finding the perfect pair of jewelled block heels for one of the show’s “fabulous” characters. ● Q: Describe your role on Six Degrees of Separation.

Lucy:  As the costume designer, my job is to dream up, create, research, source and style the outfits and looks for each character.
The characters in this play are an art dealer, socialite, and a socially stymied young person City. I drew the inspiration for the costumes from the art market in the late 1980s/early 1990s and some iconic personalities such as real-life colourful art dealers Mary Boone and Mathew Marks. 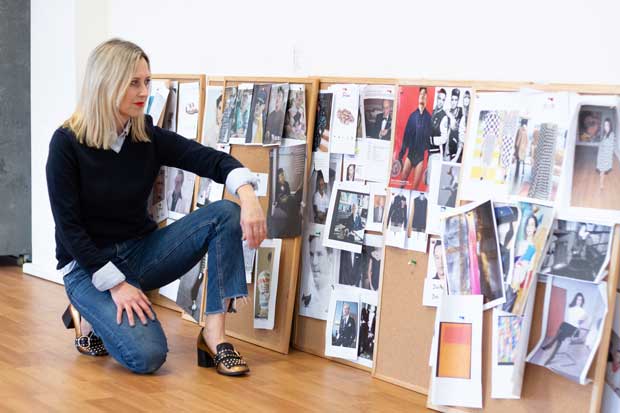 The play’s characters are ostentatious with links to the slick junk-bond traders of the 1980s. In the 1990s, the fashion and art world shifted and softened and became more charming and earnest. The costumes in this play are a source of humour – for example, there is a flamboyant floral dress in a poignant scene. ● Q: What would a typical day look like leading up to a show?

Lucy:  Leading up to opening night, my time is filled sourcing shoes and accessories. You may think “Delightful! That sounds delightful.” Au contraire! I have carried an index card of shoe sizes for the 16 characters for months now hoping to encounter specific types of shoes. I need a soft suede wrestling boot, a two-tone Oxford and a jewelled blocked heel à la 1991 Versace fall/winter runway show.

All have eluded me, but I will keep searching the Sunday markets. Thank goodness for a cast of experienced actors and a patient director. One character’s jewellery was sourced from a sex shop and a pet store. This show will keep you guessing. ● Q:Have there been any surprises styling this particular show?

Lucy:  The play is a fast-paced and some actors play multiple roles so we decided early on to include wigs, hats and glasses to help distinguish the characters. I am always thrilled and surprised when I see how the actors fill the costumes with background, layers, experiences and movement. 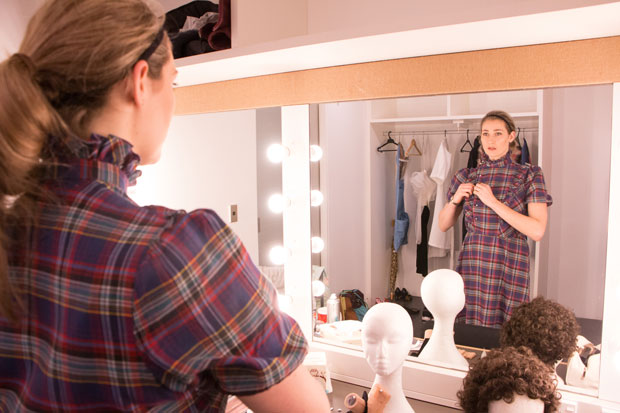 ● Q: What’s the backstage environment like at a live theatre show?

Lucy:  Backstage is fascinating. Once we move the costumes to the theatre and into the dressing rooms, each actor is shown what to wear and how to style each look. Then, I’m able to join the other designers and the director out front. We keep the audience in mind and work out how to prepare costumes for quick changes, or figure out how to add blood to a stunt shirt. Once the show starts, backstage preparations become about laundry and repair kits.

● Q: How does it compare with your commercial styling work?

Lucy:  Commercial styling is my bread and butter, and it’s only on occasion I get to style and design contemporary theatre productions like Six Degrees. Shows like this require a lot of long-term planning and big-picture thinking. I shop from the market and source from current designers instead of constructing historical costumes. For this production of Six Degrees, I am lucky enough to have the expert eye of New Zealand designer Liz Mitchell who custom-made pieces for the character of art dealer, Ouisa. And I also worked with an extraordinary fabric painter. Ouisa wears bold artistic patterns to complement the art she sells.
My commercial styling jobs tend to have a faster turnaround. But some for big advertisers – require more planning. For example, I could be asked to present upcoming fashion trends so an advertising team can develop a script. 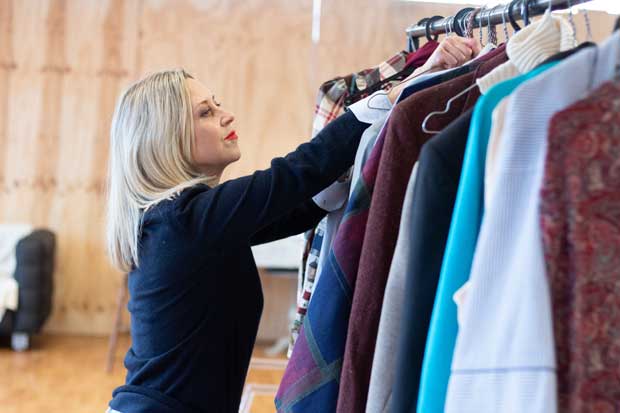 ● Q: You’ve worked in New York, how does it feel to be working in New Zealand? Is it a different work environment?

Lucy:  I am American and moved to New Zealand from New York in 2005 with my Kiwi husband Boyd and our two baby boys, Marlon and Wade. When they were school age, I went searching for styling work. It was no surprise that I found a similar pool of inspired and talented photographers and art directors and models and makeup artists in New Zealand.
In many ways, the world of Six Degrees of Separation was already familiar to me as I lived and worked in NYC when the play was set. I also found visual inspiration in personal issues of magazines such as Art News, Top Collectors, Shelter and Interview. 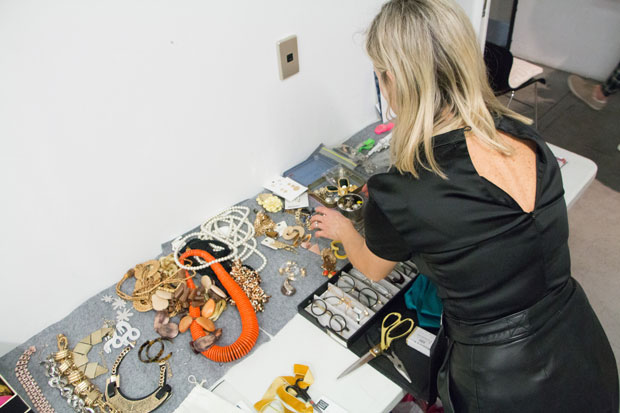 ● Q: How did you get into styling?

Lucy:  I found my way to fashion styling while living in Chicago. I worked in the painting department of an art and antique auction house. While I loved it, I didn’t fit in. Many of the young account executives came from wealthy backgrounds and were happy with a modest paycheque as they also had a monthly allowance from their parents. I went on an advertising shoot with the owner of the auction house and met some of the players in the fashion world and loved it. I ended up with a job assisting a stylist which I worked in for many years.

● Q: Have you always had an eye for it – or did you find your groove at a particular age?

Lucy:  Maybe a few lucky women are born with style. For example, former fashion magazine editors Diana Vreeland and Carine Roitfel. But, for me, style definitely came with time and experience. The late designer Kate Spade once said that style comes from opening yourself to the world around you – to books, movies, art, music and travel and especially to other people. Much of my childhood style was sourced from a dress-up box. I also wanted to look different from my sister. When I started working and traveling to big cities such as Chicago, Miami and New York, I began to develop my style. 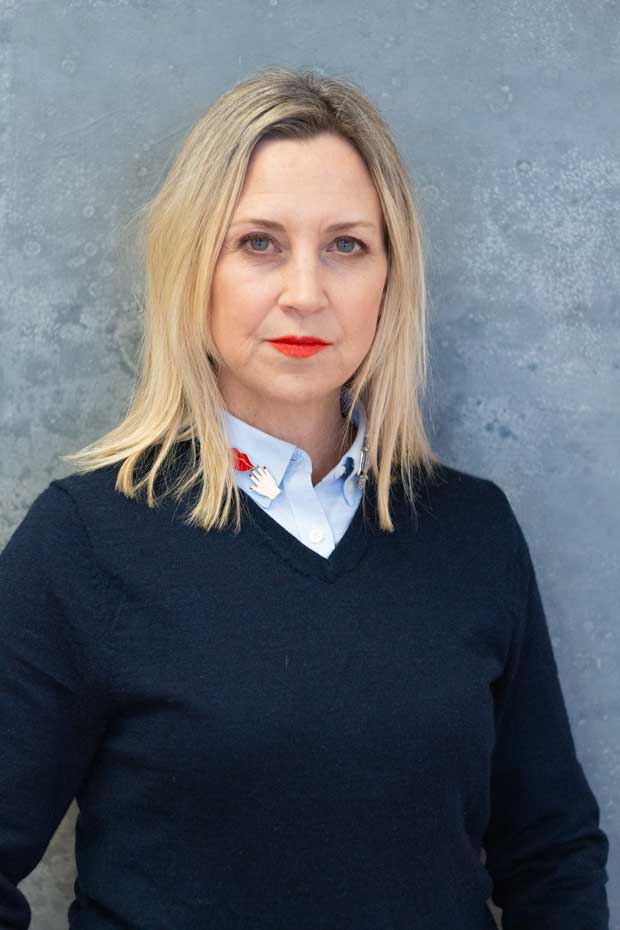 ● What do you like to do when you’re not working?

Lucy:  When I am not working, I love to entertain at home. I love setting a dining table with treasured dinner sets or serving a meal on vintage cutting boards in the garden and watching the bees from our newly acquired beehive.

Six Degrees of Separation is a multi-award-winning, razor-sharp satire of class and race relations in 1990s New York. It was adapted into the 1993 film starring Will Smith.The story is based on real events and depicts the lives of suave, sophisticated and wealthy Manhattan art dealers, Flan and Ouisa Kittredge. The Kittredges are all about keeping up appearances. But their world is turned upside down with the sudden arrival of a charming stranger.

The show runs from 14 to 30 August at the ASB Waterfront Theatre. Tickets are available at atc.co.nz