Behind Bleubell Macrame: Meet the Taranaki mum who’s bringing back macramé in a big way The art of decorative knotting is making a comeback, says Jade Parkinson. Her ode-to-the-70s business came about unexpectedly; from a simple craft she enjoyed with her grandmother to a knotted-up practice that’s overtaken her home.

In Jade Parkinson’s sunroom in New Plymouth, straw flowers, wattle branches and orchids hang from the ceiling drying in bunches. Scattered on a table are foraged heads of wheat, hydrangeas from a friend’s garden, and dahlias from her own backyard. Rounds of macramé rope are coiled on shelves like exotic snakes amid the dried flower garden. Jade pulls length after length of rope, cuts them, then loops them onto a piece of driftwood and begins to weave.

Macramé is the art of creative knot tying, a meditative practice for Jade that she’s managed to turn into a full-time job. Her daily commute (when she’s not picking flowers to weave into her creations) is from her bedroom to the sunroom which acts as a workspace for her business, Bleubell Macrame. “I find weaving so relaxing. It’s not like going to a job where you dread doing the stuff no one likes,” she says.

Jade grew up in the United Kingdom and moved to New Zealand with her family aged 11. She recalls strolling Kent’s high street as a 7-year-old with her grandmother and spotting ‘scoobie strings’ in a shop window. “They were the in-thing at the time, and I begged her to let me have them. We spent weeks making knotted friendship bracelets and little helicopters,” she says.

The long plastic strings were put aside a few months later, but the knotting techniques stayed firmly planted in Jade’s brain. The knots came in handy just as Jade’s daughter Lola turned two. Jade was 21 and a stay-at-home-mum at the time. Up until the birth of Lola, she’d worked as an early childhood teacher in Taranaki.

“I felt a bit overwhelmed at times at home, so I wanted something just for me. I hopped onto Pinterest one afternoon and found macramé,” she says. The woven wall hangings and crafts seemed familiar. Jade recalled seeing plant foliage spill over macramé hangers in her grandma’s photo albums from the 1970s – the backdrop to group photos also featuring flared jeans and crocheted handbags.

“I started watching YouTube tutorials and thought: ‘Hey, that’s the same technique as scoobies, I bet I could do that.’” Her daughter Lola was an independent toddler and, for hours at a time, happy in her own world. “I think I was a little bored when I decided to pick up macramé. Spotlight didn’t have the right rope at the time, so I bought outdoor clothesline rope from Mitre 10,” she says.

She cut and knotted her way through her first plant hanger, Lola perched at her feet playing with the off-cuts. Jade was determined to work out the knots herself rather than relying on video tutorials, so she studied photos of macramé.

“I knew the knots, I just needed to work out how to put them together. There were plenty that were terrible and there was waste to start, but I eventually got the hang of it,” she says. Her first creation was hung proudly in the bathroom holding a peace lily. She made an Instagram and Facebook account and although building an audience was slow-going initially, a year into it and at Christmas 2016 there was an influx of orders for wall hangings and plant holders. 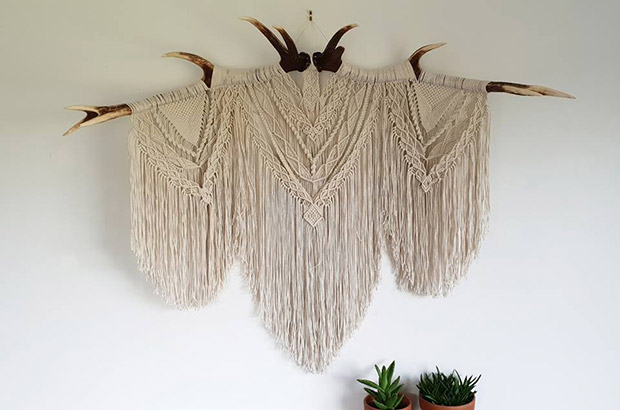 Macramé wall features knotted off antlers have become her signature look and specialty. Jade’s husband Mark (an aerosol artist) suggested joining antlers together to weave off. It took a while to source the antlers. Jade joined all the hunting groups she could on Facebook, but no one would sell them to her – not even a local Taranaki deer farm.

“Eventually I found the loveliest little old man down south to supply them. He bundles them up in a wool sack and they arrive 20 at a time,” she says.

Macramé has had a resurgence in recent years, though Jade isn’t sure why. “I honestly couldn’t tell you. It’s funny isn’t it? I think it’s just this appreciation that’s grown for handmade, local products that aren’t mass-produced.”

She suspects that things made with love and as naturally as possible don’t go out of fashion. Bleubell Macramé pieces are designed to last as long as possible; creations such as her macramé wedding arches are multi-purpose and are often later hung above the marital bed. Jade has five years worth of photos of her macramé in customers’ homes. Knowing where her pieces have ended up – and who they’ve found a home with – is the best part of her job. One Taranaki woman living rurally ordered a wall hanging in bold pinks, oranges and purples during lockdown last year. When she came to pick it up from the driveway, she gave Jade an avocado plant she’d grown herself as a thank you.

Dogs Max and Fluff (both adopted mixed-breeds) offer good company while Jade weaves, and are perhaps even bigger fans of macramé than she is. A shifty Max will often sneak past with a full roll of rope in his mouth. “All I need to do is look at him and he’ll drop it. He knows.” He’s also been known to sneak pieces of driftwood intended for macramé creations out of the garage and into the garden.

Sometimes hangings become so knotted at the bottom while Jade weaves that they form tennis-ball sized tangles. It signals that it’s time for a coffee break and breather before tackling the knot. “Thankfully I haven’t managed to get myself tied up and fall over yet.” Jade’s daughters (Lola, now seven, and Azalea, four) play with scraps, and Jade takes any leftovers to local kindergartens for collages. Her job doesn’t require much unwinding after a day of weaving, Jade says, despite its knottiness. “It’s not hard work for me, it’s fun and I feel lucky. It’s really my thing I use to unwind from other things.” Nanna Pam in Rochester back in the UK is her biggest fan. She carries a piece of her granddaughter’s art with her, wearing a pair of Jade’s macramé earrings every time she goes out with her girlfriends.

“She’s all about handmade. It’s pretty cool that I get to do this, I think she’s proud,” says Jade.

THE ORIGINS OF MACRAMÉ 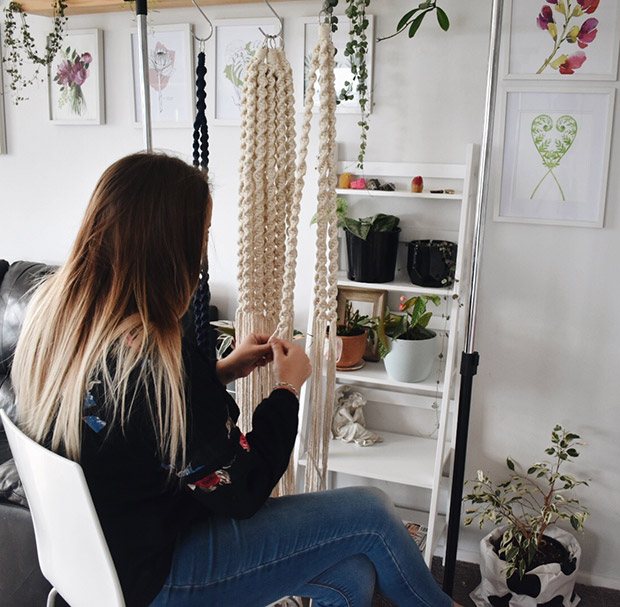 The origin of macramé is generally attributed to Arabic weavers of the 13th century, who used decorative knots to finish the loose ends of hand-woven textiles. There’s a bit of debate around it though, as it appeared in ancient China on ceremonial textiles and wall hangings.

Regardless, the craft slowly spread throughout Europe and became a common pastime for sailors. In the 1970s people went nuts for knotting again, and plant hangers, table runners, belts and bags all made with macramé rope were en vogue. If something could be made with macramé, it was.

Jade originally sold her pieces at a few local markets before shifting totally online, and says some people got what she was doing, and others didn’t. “I had some people coming and saying, ‘Gosh, I remember doing that, why on earth are you bringing that back now?’ But then others completely resonate with what I’m doing.” Jade started importing Turkish cotton in 2018 to sell to fellow weavers. “It’s so soft, you can feel the difference in quality compared to cheaper rope you might find here,” she says. Her first order was so large she ran out of space to store it. Her hallway linen cupboard was cleared to make way for more than 400 rolls of rope. Thankfully, a few more organisational shelving systems have been put in place in her home since.

DIY: How to make a cute macramé keychain