Born to rum: The husband-and-wife duo behind Lunatic & Lover met at a rum bar in the Caribbean Rum is the ‘wild west of spirits’, according to the man behind New Zealand’s first botanical rum. But Matt Bridge has tamed it into a bottle, and it drinks as beautifully as it looks.

If ever a liquor bottle could tempt one back to that acme of 1970s interior design — a booze bottle turned candleholder — it is undoubtedly Lunatic & Lover’s. Glossy and black, it has a soulful visage and skull mapped like the phrenology guides so feverishly popular back when the rum business, for better or worse, fueled global trade.

The bottle design was recognized by those in the know when it won the best packaging category at the New Zealand Spirit Awards earlier this year. Happily, the substance is just as tasty, and a double gold medal for its Barrel Rested Botanical Rum quickly followed. Then it won Best in Category. Lunatic & Lover Silver Botanical Rum had previously picked up a silver medal at the 2020 event. (A “silver” rum is pretty much the same as a white rum.)

So, it’s been quite the year for the Northcote-based rum distillery run by husband-and-wife team Matt Bridge and Angie Bradley since it officially launched in June 2020, when the country burst out of its initial major lockdown. Customers snapped up the first 100 bottles of their Silver Botanical Rum with 24 hours of going on sale as an online pre-purchase offer, and the couple’s first release of barrel-rested rum went on sale a week before Christmas. Both rums are now available online and at selected bottle stores. It seems impossible that Matt, who hails from Wales, could make anything other than rum. He’s a long-time sailor who captained superyachts in the Caribbean (the home of traditional rum), where he met Angie (who was stewarding on superyachts) at a rum bar on Antigua.

A year later, Matt was discussing what he was doing with his life over a bottle of rum with Angie’s brother when — looking at the bottle of rum on the table — they came up with the idea of making their own. “I woke up the next morning, dusted off the headache and bought a book on how to go about it.”

That was six years ago, and now Matt and Angie are living that life, surrounded by vats of molasses, tanks of developing silver rum and oak barrels of resting rum. That’s when they’re not at their day jobs — Matt as a sailmaker and Angie running her event-management business, which now includes mixology events.

“Before lockdown, we were pulling 80-hour weeks,” says Angie, adding that their two sons, Nye (10) and Madoc (14), also put in time handwriting labels, peeling oranges, waxing bottles and cleaning tanks. Luckily, the Lunatic & Lover premises are only a skip from their home — and from the Chelsea Sugar Factory with its supply of thick, sticky and often messy molasses, the base ingredient for rum. A busy life, maybe, but producing rum for sale was always the couple’s aim. Since New Zealand’s law allows personal distillation, Matt initially bought a small still to try his hand, took some courses and set about developing a recipe. “Rum is a great spirit. It’s not highly regulated like cognac or scotch, which is part of its appeal as you can do things with it you couldn’t with other spirits. And that’s how we got into botanical rum,” he says.

Yes, botanical rum. A blind taste of Lunatic & Lover silver rum, especially, might deceive the sipper into thinking they’re drinking gin. It’s herbaceous, spicy, dry — a long climb up the family tree from sweet, sunset-in-a-glass traditional rum. Matt begins his rum like any other, with molasses that’s fermented to create an alcohol wash and then piped into a Portuguese copper pot he picked up on Waiheke Island.

This is distilled three times, leaving no residual sugar — and no further sugar is added (as is common in some rums). Botanicals are added to the still’s column on the third pass — the alcohol vapours infuse with the essential oils from the herbs and spices before condensing into the fragrant base rum.

“I looked at how gin was made and thought we could use the same techniques, as rum takes on other flavours well. I chucked different botanicals in the pot of the still to see what came down. The early results weren’t great, but they were enough to show it would work and then it was a case of refining it.” 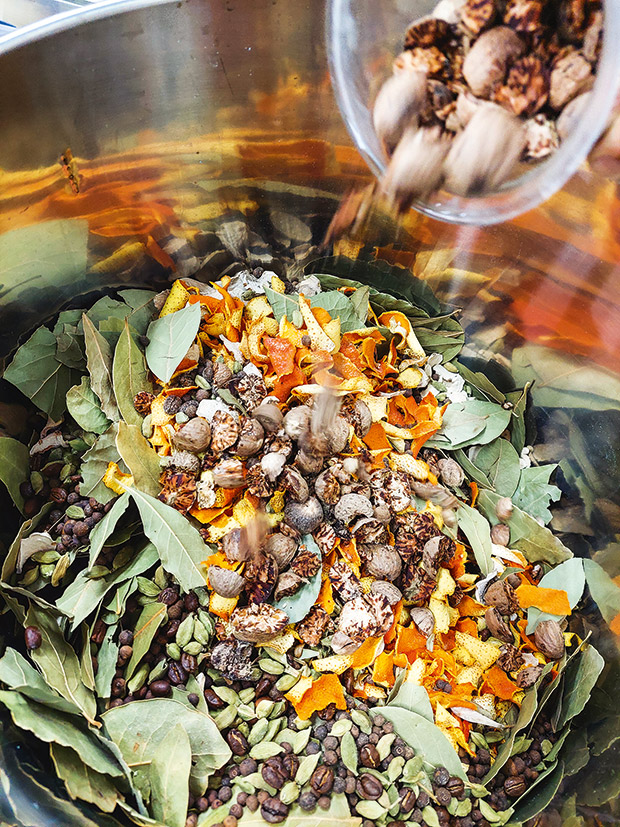 In all, he experimented with approximately 50 botanicals before settling on the final 12. First, he did a run with each botanic on its own to experience the flavour profile, building up a library from which to blend. “Once I had the mix of flavour profiles I was looking for, I tried it through the big still; then I tweaked the quantities of each botanic.”

“It was very time-consuming, for sure,” says Angie. “And Matt is such a perfectionist; even if it were slightly out, he would go right back to the beginning.”

As a new New Zealander, Matt was keen to use native botanicals but was equally determined to use only those that added something special. “There were some I tried because I thought they should be in there, such as kawakawa. But if they were a bit mundane, out they came. I was quite brutal.”

The chosen dozen includes some expected flavours such as orange peel, nutmeg, cocoa nib, green cardamon, with others perhaps a little less so — dandelion, burdock root, coffee, pimento, bay leaf, orris root. And yes, there’s a definite Aotearoa aroma, including horopito and mairehau — a delicate and rare flower that Matt has to cling to the side of a cliff to collect. As much as possible, they’re all New Zealand-grown — even the orris root — and are hand-peeled, plucked and dehydrated at Lunatic & Lover’s distillery. 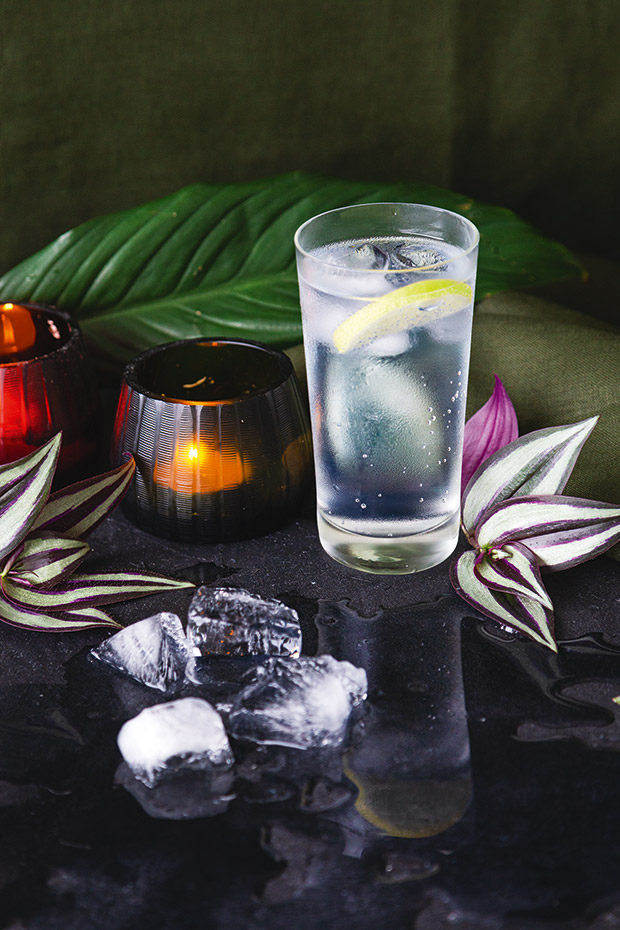 Over days, the infused 75% proof spirit is carefully hand-diluted to drinking strength, which legally must exactly match the label’s stated alcohol percentage. It’s then rested in stainless steel for four weeks for all the compounds to recover from the heat of distillation and for the flavours to develop, before being bottled as the Silver Botanical Rum or transferred into oak casks, once used for bourbon.

“Resting in the casks for six or seven months changes the flavour dramatically, and we bottle that as our Barrel Rested Botanical Rum,” says Matt.

The advantage of botanical rum is that it’s ready to drink quite quickly compared with traditional rum, which, like whiskey, can take years to mature. Developing alongside Lunatic & Lover Barrel Rested Botanical Rum are 10 barrels of traditional rum at which Matt has also tried his hand.

“It might be ready for release in three years, maybe? It’s a bit of a passion project, and I look forward to releasing it, but the botanical rum will remain the focus of Lunatic & Lover.”

Angie loves educating spirit enthusiasts about Lunatic & Lover rums, as well as cocktails in general. “Both the silver and the barrel-rested botanical rums are great sipping rums. We always encourage people to start by tasting them straight, maybe over a nice big piece of ice in a tumbler. It often surprises people how well the silver drinks straight.” Angie and Matt don’t advise adding traditional rum mixers, especially to their oak barrel-rested rum. “Coca-Cola or ginger ale will mask the taste,” says Matt. “Do add good tonic water and a slice of lime to the silver rum, and you’d be hard-pressed to do better, especially in the warmer weather.”

When he’s not drinking his own rum, Matt likes to sample those from small distilleries worldwide. “People think of rum as being from the Caribbean, but it is made around the world. I recently tried my first clairin, which is a traditional sugar-cane rum from Haiti. It’s been around for hundreds of years but is only now being marketed. There are hundreds of tiny distilleries all over Haiti, all doing terroir-driven rums made from sugar cane. It’s not for the uninitiated, but it’s truly extraordinary.”