The butcher, the baker, the kaffeeklatsch maker: the Vinbrux family take Oamaru 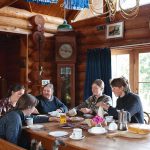 The family at home 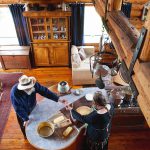 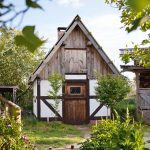 The bakehouse is an essential part of farm life. 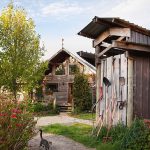 With typical German precision there’s a place for everything – garden tools hang from the woodshed wall opposite the farmhouse. 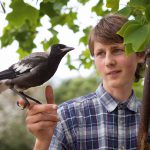 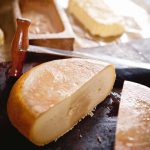 Home-made dairy products and four different types of Richard’s bread are a regular part of the breakfast and lunch menus. 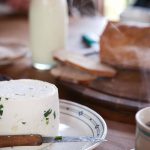 Richard says the family can make do with about $20,000 for a few years in succession, although they “eat like kings”. 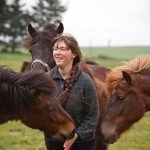 Christel and Richard brought four mares and a young stallion with them from Germany to set up a modest Icelandic horse stud that would give them a regular income in New Zealand. 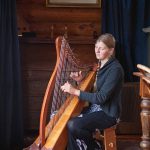 When she was 10 Judy began learning to play the harp because she loved the medieval look of the instrument. 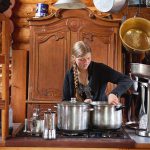 The house is furnished with rustic antiques from France and Germany, including the kitchen armoire behind Judy. 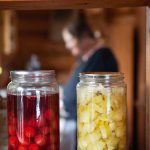 Over the years the family has planted a half-hectare orchard. Summer fruit and vegetables are preserved for winter. 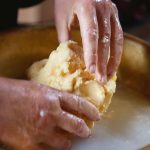 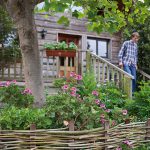 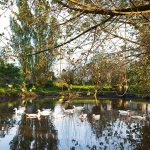 The view across the pond.

In the two years since the proficiently self-sufficient Vinbrux family of Oamaru first captured the hearts of NZ Life & Leisure readers, for their ability to live well on food expenditure of $90 a week, the family has branched out and taken Oamaru food retailing by storm. The farmer is now the butcher but the baker is still the baker and the milkmaid-gardeners have become the kaffeeklatsch makers.

The Vinbrux family, who’d relocated from Germany to the outskirts of Oamaru in 1998 to make their living off the land and home-school their children, captured the imagination of NZ Life & Leisure readers in Issue 60. The story of this multi-talented and hard-working family (of two parents and five children) became so popular they then starred on TV and radio as well as in print and on social media. “Most of the time we can live quite comfortably off the smell of the rag that was lying next to the oily one,” Richard told NZ Life & Leisure in 2015.

Joking, we think as being self-sufficient, or jolly near, is far too much work to see them enter a Kardashian world. It was the lure of feeding a family of six, plus a few extra worker mouths, for $90 a week that drew such attention to their achievements. Richard and wife Christel, Sarah (22), Danny (19) and Judy (17) still live on the farm and, with the help of a fleet of wwoofers (and Judy to tend the gardens), keep the busy property in fully productive mode. However, Judy no longer milks the cows and goats. Richard does that once a day after he has finished his 4.30am to 11 am shift as the baker for the Viinbrux Kaffee Haus, which opened last October in Oamaru’s Arun St. 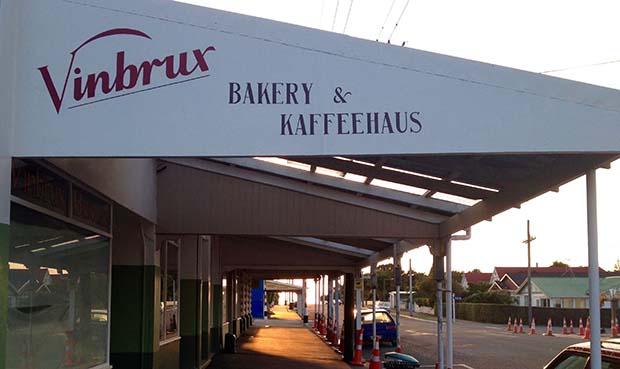 The family owns three of the shops on Arun St, Oamaru that stand opposite a primary school. Photo Nathalie Brown

He and Christel had bought three shops, in a block well away from the Oamaru CBD, seven years previously with the intention of setting up their kids in business when they were old enough. The food industry was an obvious choice. 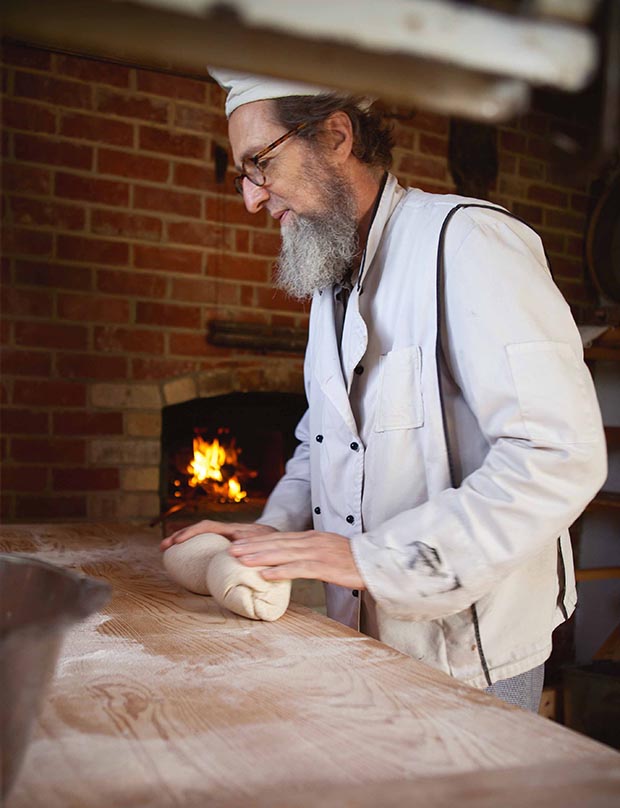 Richard’s qualifications were in agriculture and as a master baker in Germany, and he has been producing fabulous fare for the weekly Oamaru Farmers Market and for the family bakery while Christel holds a masters in home economics from a German university and there’s nothing she can’t do with home-grown ingredients in making delectable food. Eldest son, Fabian, is still making his way in the wider world and 28-year-old Jan has a house in town. 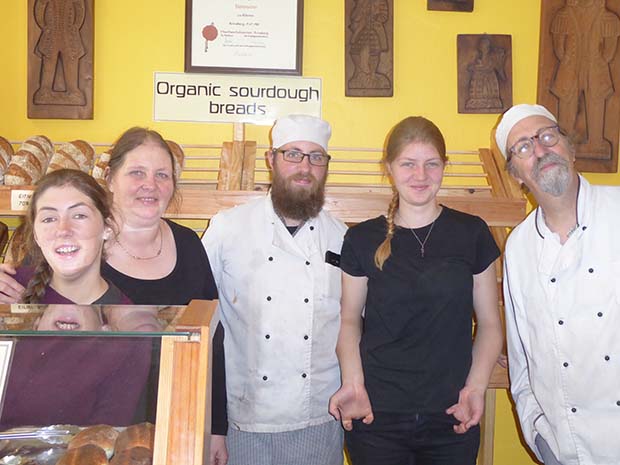 Danny has wanted to be a butcher for as long as he can remember. He practised on the home farm for years and studied for six months in Germany learning the art of small-goods making. Danny Vinbrux’s bratwurst and frankfurters are unbeatable. He now makes and sells eight different kinds of sausages, pate and black puddings as well as the full range of butchery with locally sourced meats. 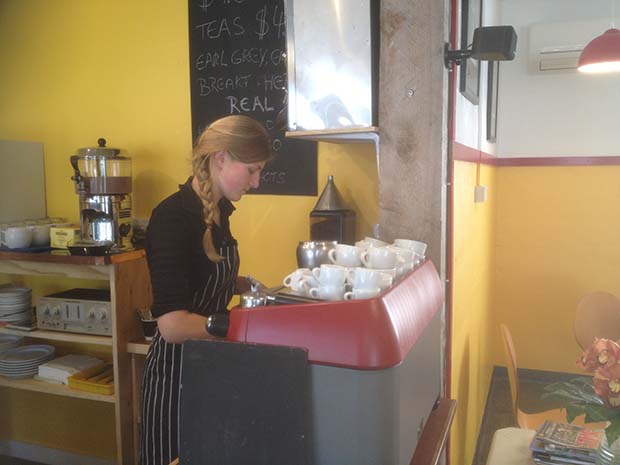 One of the best baristas in town gave Judy lessons in coffee-making, then she worked on her technique alone. She’s thrilled with the compliments she gets on the quality of her brew. When she’s not making coffee, she’s working in the patisserie room making Black Forest cakes, mocha butter crème cakes and other gateaux. Jan has taken over more of the bakery production to give his father more time to tutor Judy in the patisserie. Judy is learning to decorate the patisserie – some of her early efforts include the luscious chocolate Sachertorte and a fabulous Mocha Butter Creme cake. Photo Nathalie Brown

Christel creates the menu and cooks the lunch dishes six days a week. Most of the produce comes from their farm, butchery and bakery. In addition to the swoon-inducing bakery items, the savoury dishes such as knackwurst with sauerkraut on a bread roll are authentic German fare and a rare treat. As for the kaffeeklatsch – strictly speaking, it’s not a created product, more a created mood – and the Vinbruxes provide the setting where other people feel welcome to sit around for hours, drinking coffee and gossiping. That’s kaffeeklatsch.
“It’s easy to have a kaffeeklatsch in Oamaru where everyone who enjoys good coffee knows everyone else who likes it too,” says Christel. 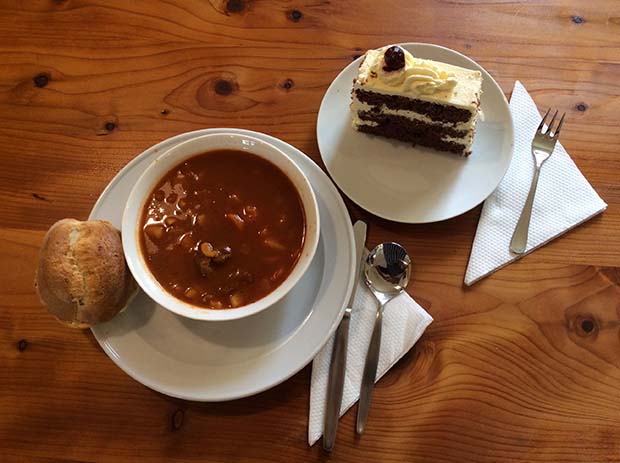 A bowl of goulash and cake to follow is a $13 lunch at the Vinbrux Kaffee Haus. Photo Nathalie Brown

Add stock, tomato paste, paprika, pepper and salt, bay leaf and let simmer for at least one hour, until beef is tender.

Add potatoes and marjoram for last half hour, but make sure they are cooked through. Add parsley as a garnish.