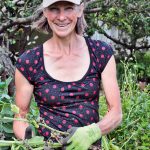 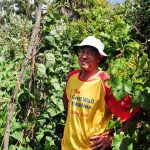 John in his climbing beans patch. 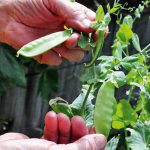 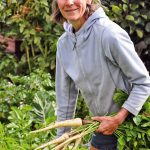 “Now my philosophy is that the whole garden is a compost heap.” 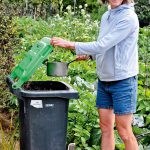 Liquid manure is made up from grass clippings and weeds by composting it in a bin. 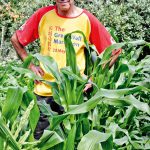 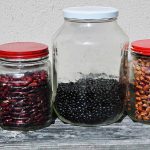 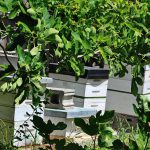 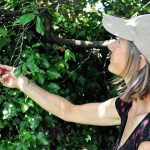 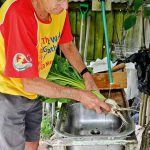 John in his vege cleaning area.

Meg and John Christie are living their self-sufficient dream on a half acre block, but they haven’t had to leave the city to do it. “Here come the Christies,” say the neighbours. It’s autumn and Meg and John Christie are out in their inner-city Christchurch garden armed with sacks and rakes, gathering plane tree leaves. The couple value organic matter too much to let the wind steal the fallen leaves on their street.

“People find us amusing,” says Meg. “But some even come out and help us.”

Look up their street on Google Earth and you’ll find their huge city section covering half an acre (2000m²) is as green as their attitude.

“We are self-sufficient in wood and vegetables. We can go without shopping for weeks,” says Meg proudly.

Their big home garden – the surrounding properties have three homes to their one – shows they are seriously committed to growing good food nature’s way. Meg and John, both lithe and lean, they look like their lifestyle agrees with them. Beans – including fresh and dried purple, broad, haricot, borlotti and black – are a favourite and eaten three times a week. The black beans were found at a party decorating a plate and were taken home to be planted. John loves trying new things, especially if someone has gifted them to him. The evidence is everywhere: a row of soya beans, some experimental sugar beet, blue corn, mushy peas, Chinese snow peas, and even a Dutch pea called ‘kapuseiner’.

All around their plot are towering fruit trees, including apples, pears, apricots, greengages, plums, peaches, peacherines. Everywhere you look there are productive plants. Meg and John work five days a week and go running in their spare time (what spare time?) so the obvious questions is: how do they do it?

“You have to have a relaxed attitude or you’d go mad,” says Meg.

“And we get more efficient all the time,” says John. “For instance, we used to have a weed-free garden until we discovered we didn’t need it. Weeds are only a problem when they compete, as with slow-growing crops like parsnips and carrots.” 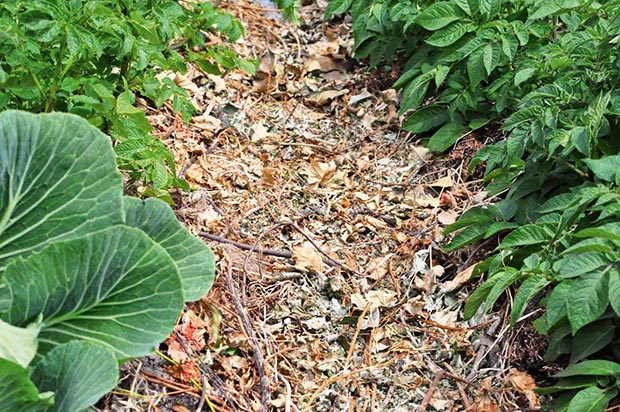 Compost ingredients are spread around the garden and left to rot in place.

John says they used to make compost the intensive way in layers but decided it was too much work.

“Now my philosophy is that the whole garden is a compost heap.” John simply lays out the waste material – weeds, coarse vegetable stalks and all – between the rows of vegetables.

“It deters the birds that go for the composting insects (like) springtails and worms, it protects the soil and conserves moisture.”

It’s even more amazing to learn that the Christies are living off a vegetable garden that is hardly ever irrigated, and no water goes down the drain – even the water from the kitchen sink goes on the garden. 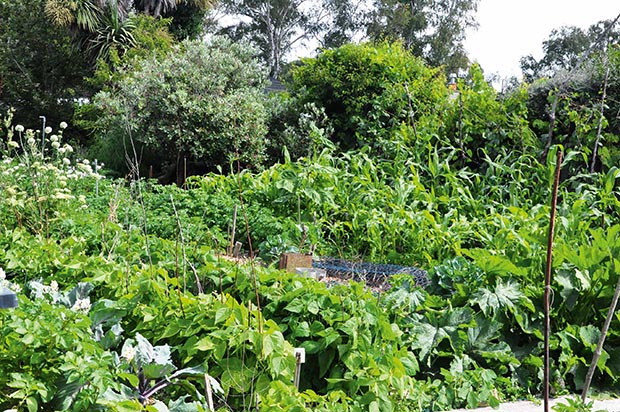 At first glance, the garden seems somewhat random. John describes himself as a spontaneous gardener, but he’s also reflective. Start asking questions and he has a reason for everything he does. Dotted around the garden are cryptic messages scrawled on recycled ice-cream container lids, labels which John calls ‘notes to self’. He’s happy to practice accepted garden lore, but if common wisdom needs questioning, he’ll challenge it. He grows potatoes in a different place each year because it reduces soil-borne diseases, but he long ago discarded the adage that you should always buy certified potato seed. 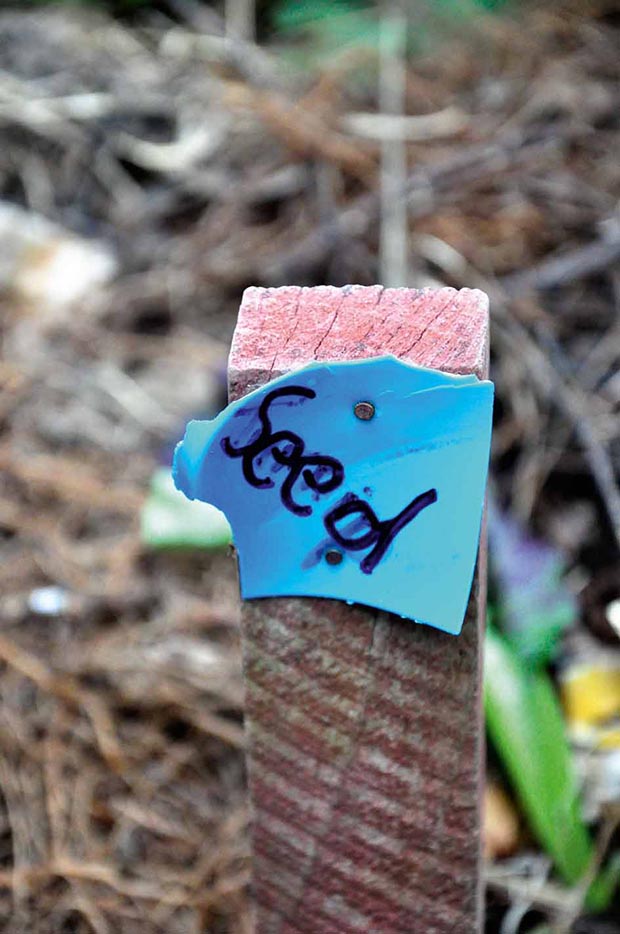 One of John’s ‘notes to self’.

“One day I had a chance conversation with a potato expert. I learned that to grow your own seed potatoes you simply save seed from the best, healthy plants. So now I mark any diseased or small plants with a stick to exclude them from seed and save the rest. Now all my potatoes are grown from my own stocks – some of my saved potatoes date back to 1982.”

One season John chanced upon some dry beans that had missed harvest at the end of the season.

“I thought I may as well keep them for seed. Now it has evolved to the point where just about every vegetable we grow is our own seed. Our saved seed is very fertile, much better than purchased seed, and we harvest huge amounts.”

John shows me a parsnip flower weighed down by seed.

“There must be enough parsnip seed here for 10 hectares!”

Many of the vegetables self-sow – nature taking care of the planning – so plants like silverbeet are available all year, self-sown and occasionally transplanted.

“We had the idea that we would grow so much silverbeet that the chooks wouldn’t eat it all,” says John. “Wrong! The chooks even jumped up onto it to eat it when it got high!”

Their flock is also a source of great amusement, says Meg.

“We were out here when an earthquake shook the ground and I remember looking over and there was no change in behaviour at all.”

She still has a soft spot for her hens , cooking up snails for them occasionally (they prefer them cooked). When the couple is gardening they have three buckets: one for slugs for the chooks, one for flat stones for the tussocks and one for other non-biodegradables like plastic labels and ‘bits’. John and Meg are wary of chemicals as they believe no-one knows the long term effects, but they are relaxed about caterpillars. 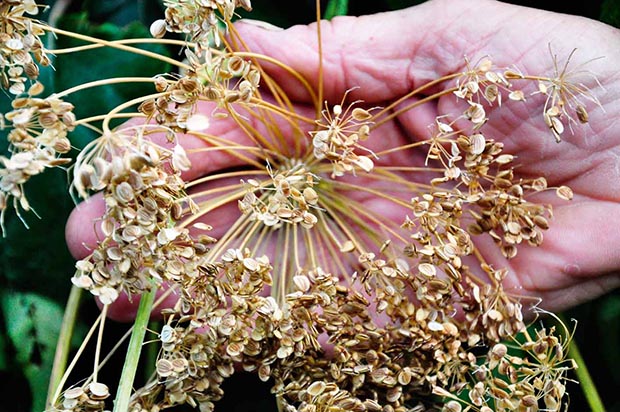 THE BIRDS AND THE BEES

“You can’t grow vegetables unless you accept that sometimes it is not going to work. This year it has been the sparrows eating the peas.”

He points out some devastated plants that are more stalk than leaf. A scientist in his day job, John is a problem solver, but he hasn’t found a solution for the sparrow attacks or for varroa in his bees.

“Bees are much more work now and we’ve found we have to use the poison Bayvarol, at least until we have mite-resistant bees.”

Despite the battle with varroa, John is persevering with his hives. Surplus honey is given as gifts and exchanged for green dollars to buy soy milk and books.

To save their silverleaf-infected fruit trees they have amputated limbs and used trichoderma, a beneficial fungus which attacks the silverleaf.

“We drilled holes into the branches and inserted the trichodermas. At $12 a pop, they are pretty expensive. It isn’t a one-off cure, but it did seem to work.”

ACROBATICS IN THE APRICOTS While John is the ‘vegetable man’, the 25-odd fruit trees, some of them very large, are Meg’s department.

“I do the pruning, picking and planting,” says Meg. She points to a tall tree. “I spent three weeks sawing up there.” The tree is as high as the house and it looks like a job for an acrobat, but it’s a good year for apricots and the tree is loaded with fruit.

Meg is quite creative with marmalade, extending it with apricots. She also bakes her own bread using about 20% potato which makes for a moister, denser loaf. Potatoes are a staple and they grow the dark purple Maori potato because it keeps well she says.

“Even after they are shrivelled up they are still edible,”

Nothing is wasted. They are onto the third pick of broad beans by late summer, all of them are blanched and stashed in the freezer for winter.

“In the winter we eat broad beans about twice a week.”

The bigger, older, more mealy beans aren’t thrown out. Meg turns them into a light green hummus; any leftovers are cooked and fed to the chooks. A colourful array of beans is stored in jars on the kitchen shelves for year-round use. Ones with a hard skin like the kapuseiner go into stews or are ground in a mill to make patties and bean flour. Others are soaked, then the leachate water is thrown away and the beans are boiled.

“Sometimes we eat them straight, at other times we put them in stews.”

Chinese snow peas are a favourite in stir-fries, but when the fresh peas and beans dry off, Meg treats them as she would a dry bean.

In their spare time, John and Meg cycle and run with a club, which is how they first met. Meg remembers the first time she helped John harvest gooseberries and tomatoes. She acknowledges it isn’t every female’s ideal to spend the weekend gardening.

“But I love it,” she says. “This is our recreation. I don’t watch a lot of TV, I’m happy watching jam boil and preserving.”

“And retirement?” Meg and John look thoughtful. “We’ll be scratching around looking for jobs.” “How about subdividing?” They both shake their heads. “We’d be claustrophobic on a quarter acre section.” 1. Save work by getting relaxed about weeds – they’re only a problem if they compete.

3. Save and build up natural predators by not using chemical sprays.

4. Select the best plants and save seeds.