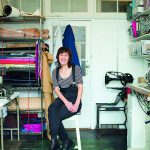 Louise’s shoemaking arsenal doesn’t worship at the altar of the new or the flashy: “I have tools from 1865 and books that were published in 1911 and they’re still current,” she says. 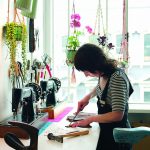 Louise’s studio is part of a collegial artsy hub. “The top two floors are full of artists and designers. It’s really friendly. If you want to succeed in Dunedin you have to be a good person. You can’t get away with being a meanie because everyone will hear about it, which I really like.” 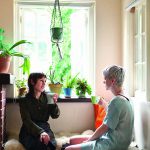 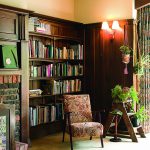 The owners were looking to rent their home to a family, but Louise changed their minds: “It’s such a beautiful house. I wrote a letter to the landlords explaining why we loved the house and that we would treasure it. I gave them a little bio of each of us with a picture. If you want something you should just ask for it.” 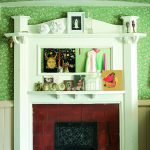 “My house is a flat, so it’s a jumble of individual styles. On the whole though, we try to stick with a David Lynch/Cluedo/hunting-lodge theme. Because I secured the flat, I got first dibs of the rooms. My room isn’t the largest and it doesn’t even get much sun. But it does have the prettiest wallpaper.”

Determined to help resuscitate the art of bespoke shoemaking, Dunedin’s Louise Clifton has opened her own shoe school

The first pair of shoes that Dunedin shoemaker Louise Clifton crafted had felt uppers and car-mat soles. Not the loftiest mix of footwear ingredients but one that delivered a shoe epiphany nonetheless.

“I was so stoked with them – they were actual, almost functional shoes. I generously offered to make pairs for friends, but nobody wanted them. That was when I realized I’d made something really dorky only I could see the potential in. But I thought, OK, I think I’ve found something here.”

Nine years on, Louise’s friends no longer shun her footwear offerings. She has her own splendid shoe school, now. But let’s back up a bit – to Louise pre-epiphany. Four years of photographic design at Massey University, Wellington, had given her the fidgets.

“Things had moved from the darkroom to the computer and that wasn’t where I saw myself. I loved studio photography but I was more into making the costumes and props because it was hands-on and tactile. So I thought: right, I’m visual, I’m creative and I have drive so I just need to pick something that’s more in line with me.”

It was on her daily commute to university that shoes first shot across Louise’s radar. She spied some interesting crafty doings through a shop window on Wellington’s Cuba Street. It was the workshop of shoemaker Sue Engels: “I always coveted her job. I loved the craftsmanship involved and the traditional skills. I was really shy so I didn’t even talk to her – I’d just go into her shop and sit there and look through the catalogue and not say a word. But it planted a seed.”

The seed stayed dormant until 2009 when, newly settled in Dunedin, she found another shoe-y spur in a second-hand store: a book by American author Sharon Raymond called Crafting Handmade Shoes.

Kismet. Louise devoured it. It was this book that prompted those dorky, car-mat-bottomed slippers, and inspired her to write to shoe-savvy people the world over in search of an English-language shoemaking apprenticeship. The result: a disappointing nil. 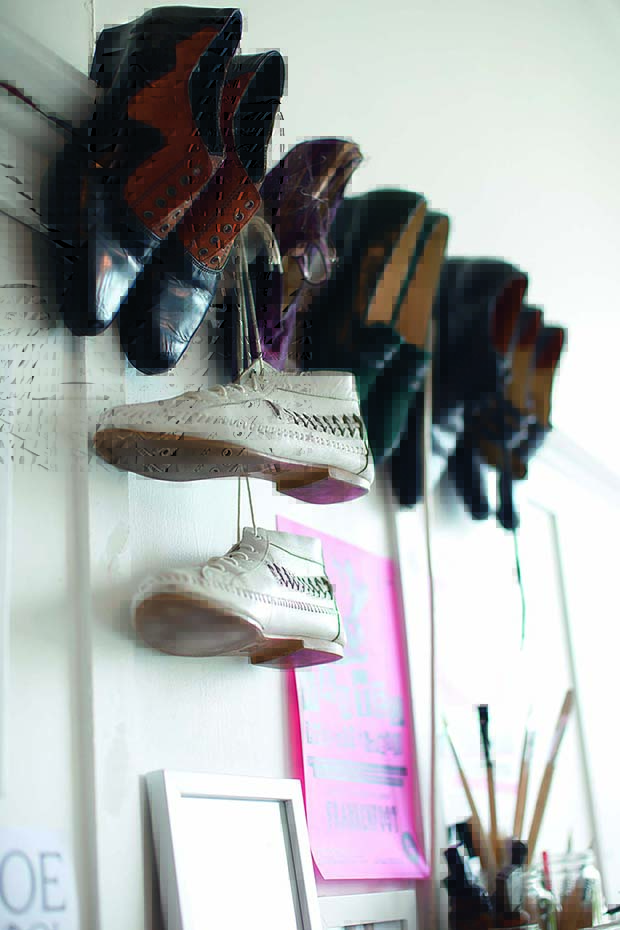 This is where the impressive Clifton tenacity kicked in. Undeterred by this apparent shoe-training void and her own squeezed finances, she wrote to the woman whose book had stirred her footwear fancying and proposed a trip to the USA to glean shoemaking tips (to be financed by the sale of her design-school photography equipment).

Sharon wrote back and steered her towards a less costly destination: a shoemaker in Tasmania called Luna Newby who, it transpired, was suitably impressed by her pluck. Says Louise: “I was her first international student. I explained to her that I didn’t have much money and she said I could camp on her land. I ended up staying in her house for 10 days. She let me use her studio for as long as I wanted. So I stayed up every night until midnight. I thought: this is definitely what I want to do. This is cool.”

The only other training Louise could find was a three-week Otago Polytechnic course (with Angela Buswell from Minx Shoes and staff from Dunedin long-time footwear manufacturer McKinlays). All up, this amounted to just over a month of footed fare – not enough to fully unravel the secrets of the shoe world, but Louise’s grit made up the balance. “I researched and I practised. I wrote everything down obsessively in notebooks. I went to bed just thinking about the process of making a shoe so I wouldn’t forget it.” Louise chased down her own opportunities: she flew to Auckland to meet with a leather supplier who in turn introduced her to that doyen of handmade shoe-ness, Sandy Cooper of Minnie Cooper (Sandy gave her industry advice and Louise gave Sandy social media/online selling tips).

She approached fellow Dunedinite Tamsin Cooper for some coaching on how to navigate a craft-based business; asked a friend to steer her through a business plan and long-term goal setting; and she took herself along to free business seminars. When the government smiled fondly on her fortitude with an Enterprise Allowance, it gave her the requisite financial leg-up to launch her first business in 2010. She called it Lou’s Shoes.

These shoes were of the boutique, leather infant-footwear variety – much simpler and more cost-effective to produce than shoes for large and difficult grown-ups. Not your bog-standard babywear, Lou’s Shoes were classic vintage designs (think mini brogues and penny loafers). They were a huge hit – she eventually notched up 25 outlets nationwide.

“At maximum robot capacity I was making up to 60 pairs a week. I felt like there wasn’t much respect for making baby shoes at home but I hung on in there and kept reminding myself that I wasn’t always going to be making them. The hardest bit was just taking myself really seriously – just pep-talking myself every day.” It was during this time that she convinced her Tasmanian tutor, Luna, to run a workshop in Dunedin (which she did for three consecutive years). In exchange for facilitating the workshops, Louise was able to assist her. Those Clifton notebooks bulged some more. So did Louise’s shoe confidence.

In order to keep the coffers topped up, in 2013 she took a job as manager of Dunedin’s Trade Aid. “Lou’s Shoes was always part of a greater, grander shoe plan,” she says. “Working full-time meant I had to wind my business up, but I didn’t mind. I knew I’d done my dash with baby shoes, and it was an opportunity to save money and develop my own shoe-school workshops in my spare time.”

At the end of 2015, after two years of time-biding, money-squirrelling and after-hours shoemaking, Louise was ready to launch her own school, the Shoe School. “I really do like teaching,” she says. “All of my experiences of meeting shoemaking teachers were positive and they were the kind of people I wanted to be around.” From a studio near Dunedin’s Octagon, Louise runs night classes for beginners three times a week, and four-day block courses twice a month. “Lots of people want bespoke, made-to-measure shoes with a bit more handiwork. It’s no different from clothes and food.”

The Shoe School’s students are diverse. There’s Moe who made a pair of shoes to take back to her boyfriend in Tokyo; 17-year-old Bruno, who was thrilled by his pair of long lace-up boots; and Chinese-speaking Jack, who wasn’t very confident with his English but really wanted to make a pair of shoes, so his son Johnny joined him every week to help translate (Jack had such a great time that he’s now making a pair of shoes for his wife, Margaret). Louise’s other alumni: tourists, fashion students, retirees, industry professionals, groups of friends, and those who just want to recreate a beloved pair of shoes/accommodate foot quirks/make something foot-funky.

More stories you might like:
Inside Blair Somerville's whimsical, world-famous Lost Gypsy caravan and gallery in the Catlins

All those pep talks, the studiously filled notebooks, the frugal living, and the nights spent dreaming herself into shoefulness – all this has paid off royally. “I just can’t believe that I have my dream business and that it appears to be working,” says Louise. “It’s all fun and amazing.” 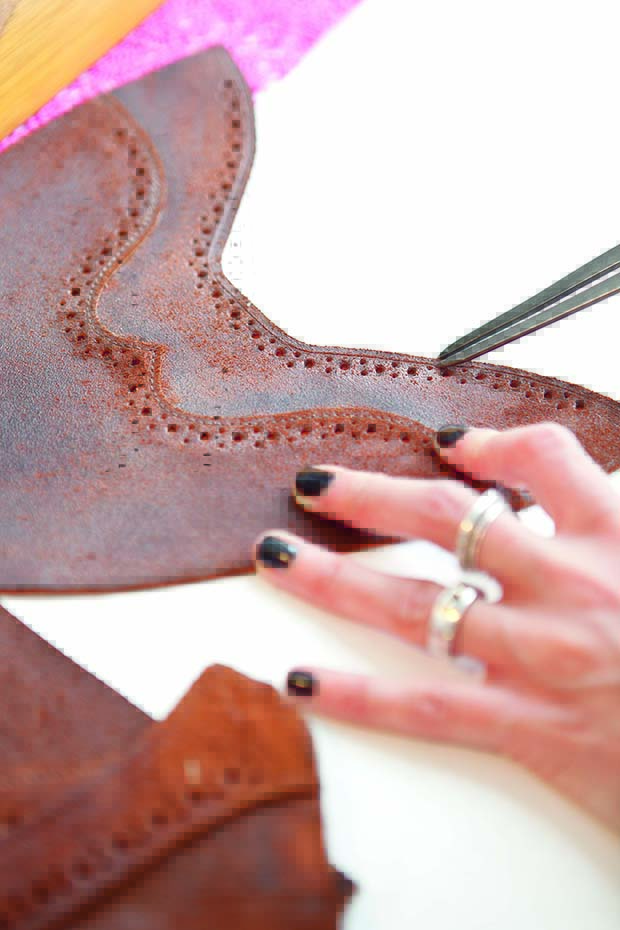 LOUISE ON HER RECENT INTERNSHIP WITH A JAPANESE SHOE MASTER:

“Last year I spent two months at the Clematis Ginza workshop in Tokyo with Japanese master Takano Keitaro. It was another world. Each pair of shoes costs $2000 to $5000 and takes 10 months to make. Takano is one of the few Japanese-trained shoemakers so that makes him quite special. It was arranged that I would teach him English for an hour each day and in exchange I could observe and attend his classes. Some of his students had been attending his classes for years. I asked one of them if he’d ever set up a studio of his own and he replied, “No,” Takano is the master. In New Zealand you don’t get access to the tutors and materials like you would in Japan, but you can do whatever you want. Having that Kiwi DIY ethos has been beneficial because I’ve been able to call myself a shoemaker, despite my inexperience and have been in control of my own destiny.” LOUISE ON THE IMPORTANCE OF GRIT AND SUPERPOWERS:

“I’m a bit of an anxious person but I decided recently that it’s actually my superpower. As soon as I wake up in the morning I’m just go, go, go. I have a big to-do list. I used to think, ‘Oh Louise, sit down and do some breathing exercises and have a cup of camomile tea.’ But now I think, ‘No that doesn’t work for you – just go and harness it.’ “I saved every single thing that I earned while working full time because I knew that my life was not going to be as simple for long and that I would eventually need that money. I’m pretty good at forgoing – at not buying expensive things for myself, not treating myself. I’m trying to get better at treating myself. I’ve used my savings to buy better equipment and materials and tools – that makes me really happy.” Visit shoe-school.com