Amy Leigh Wicks’ second volume of poetry, The Dangerous Country of Love and Marriage, looks back to her childhood in the United States, untangles her arrival in New Zealand, and charts the upheaval of her adopted hometown, Kaikōura.

Once I said, I want
to be a lawyer, a doctor
and a ballerina –
I woke 20 years later
writing these poems.

“Sometimes I think, ‘What if I were a doctor or a dancer?” the 31-year-old poet says. “Am I too old for that now?
“The poem sums up the feeling that, as a child, you see being those things as fun and important. But I think what I’m doing now is important, too. I never thought I’d be writing poetry at 31. But poetry will always be a huge part of my life.”

And, until she’s able to pay her bills with prose, working in communications probably will, too. She’s snuck away on her lunch break for a quick interview from her job as a communications advisor for the North Canterbury Transport Infrastructure Recovery, formed after the November 2016 Kaikōura earthquake. 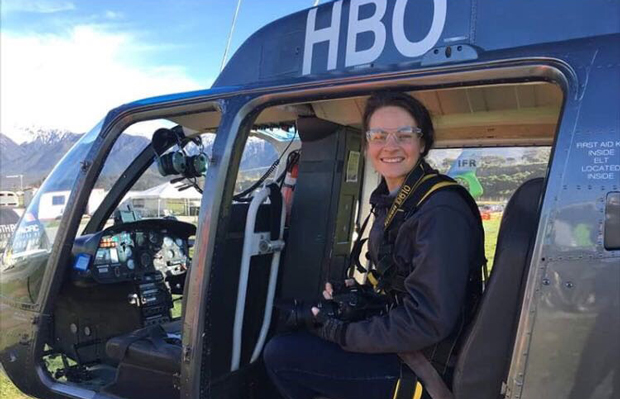 Amy joined the NCTIR team in July 2017. When she did, she left behind an enviable lifestyle – writing poetry in “splendid isolation”, gazing at views of the mountains and sea, warmed by her heater and a steaming cup of rose tea (rhyming unintentional). But the new job gave her fresh eyes for her adopted town, she says, and balanced out her creative endeavours.
“I find corporate writing is a good break from poetry. But I have to remind myself that while I want to describe the colour of the sky and how things feel, everyone else wants to know when the road will be open.”

Amy is far from isolated, of course. She lives with her husband Matthew, with whom she eloped. In California, they cashed in the motorbikes they had escaped on from her home state of New York for aeroplane tickets and the promise of New Zealand – a country Matthew told her she just had to see.

I married a man on a motorcycle from out west
and left my city, my state, my country for love.
I did not look back. I thought I might turn to salt.
– Water Song

She didn’t know Aotearoa, but she knew the country’s poetry, starting with James K Baxter. She’d discovered him after asking a librarian at a New York library for everything they have on New Zealand poetry. 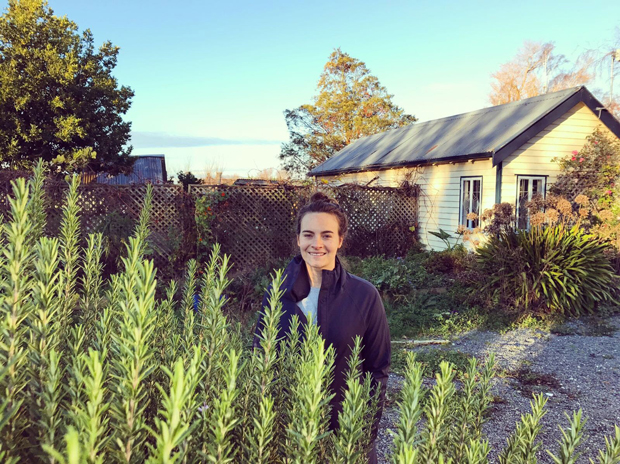 “She brought out a small stack, and the first book I picked up was Baxter’s Autumn Testament.”
In it, Baxter writes a love poem to his wife, from whom he was estranged. Amy had just received the news her parents were breaking up, a sad bit of information that had driven her into her “happy place” – the library.

“I read that poem over and over again, then came across a collection of selected poems with an intro by Fleur Adcock.”

From there she found Hone Tuwhare, Bill Manhire and Vincent O’Sullivan, discoveries that led to her to a master’s in fine arts on New Zealand poetry at The New School University in New York.
“My supervisor David Lehman had had a lot to do with New Zealand poets, and another of my teachers was Jenni Quilter from Auckland University.

“With poetry and literature in general, timing is everything. You read the right book at the right time, and it changes your life, whereas a year before you wouldn’t even have looked at it.
“It felt like I had all these little stars that kept connecting me to New Zealand.”

Five years on, Amy now has a PhD from the International Institute of Modern Letters at Victoria University, made up from her second volume of poetry, The Dangerous Country of Love and Marriage. She also has a grandly titled thesis: Confessional Transcendence: A Contemporary Mode of Poetic Creation.

“I hope my thesis is the compost heap that my work will continue to grow out of, while the book is my painstakingly cultivated garden,” she laughs.
Amy began writing poetry when she was seven, inspired by the discovery in her grandparents’ Staten Island attic of a box of rhyming verse written in her grandmother’s hand.

“So, I went into my grandfather’s office and wrote a poem like Robert Frost’s The Road Not Taken. I’d never read it but must have heard it before. Then Grandma took me out for an ice-cream cone, so I thought, ‘Oh, you write poetry, you get gifts or ice cream’.

“No, it’s not like that anymore but if I write a poem for a friend, I sometimes come home to cookies left on the doorstep.”

After that, Amy didn’t write much poetry until a broken engagement at 20. “I got lots of ugly crying poems out of that.” While no poem in this book would fit that category, all are still personal and confessional, charting her experiences as a child, an adult, a spiritual searcher, a new wife, and a new Kiwi. She doesn’t feel they’re too confessional, as always aware of the role her husband plays in them. “He’s so much of an inspiration throughout it was important he felt honoured and not uncomfortable about things he didn’t want to be shared.

“But getting across the truth of an experience is more important than the factual details. So even though I’m sharing personal things, I’m very much aware it’s a work of poetry, and I’ve chosen what to leave in and take out.”

The various poetry challenges she set herself also gave her distance – challenges such as writing in the form of a psalm, a canticle, or mirroring the end words of WH Auden and Dylan Thomas poems.

“With a fixed form, I was able to concentrate on meeting those constraints and I just had to get to the end of the line. That allowed me to tap into subconscious ideas I didn’t know were there, but my brain could go away and find them.

“I think that brought up memories I wouldn’t necessarily have remembered had I not had to find a particular word.
“I guess I do these challenges because they’re a good mental workout, and they keep me from being in my own head so much.”
For someone who’s been in New Zealand only a handful of years, she also uses an impressive amount of te reo.

More stories you might like:
This couple spent 10 years designing a timber eco-home and co-housing village near Whanganui

“When I started at Victoria University, I wanted to understand New Zealand. I didn’t know about New Zealand culture and history, so I took a te reo course, then a Māori culture and society course. I loved it.

“It felt very natural to write with te reo, especially as I was writing many of the poems straight after the classes.

“It was a challenge, but it felt good and natural. I thought about taking out some of the words but couldn’t because they were so integral to the poetry.”
Amy and Matthew have also made themselves integral to Kaikōura, solidifying their place in the community after the earthquake.

“In a tourist town like Kaikōura, people are very friendly and kind, but they expect you to move on, so it can be difficult to feel like you’re part of a community.

“When we stayed after the earthquake, people could see we were committed, and it felt like they really welcomed us in. By staying, we showed that this was home and we would do what we needed to do.”

How long the couple will stay, Amy can’t be sure. But she is convinced that she’ll keep writing poetry, with no desire to retrain as a ballerina, a lawyer or a doctor. “I can still dance in my kitchen, argue like a lawyer and give someone a Band-Aid. I’m happy.”

You live here now
in a small town

where the bases of mountains dissolve
into the sea. Imagine it, because you live here.

That is your grocery store,
this is the church

and you need to learn names
even if you won’t be here forever.

Will you be here forever? The earthquake
Will be unplanned. The ripping you feel in your chest?

It’s called love. It won’t suffocate you
but it hurts. The bread you eat is real.

The dusty mountains
are not papier-mâché.

The kai moana rotting on the shores, smell it –
all real. You live here. This is not Purgatory

but the roads do
close and open

like the lollipop people get
their messages from God.