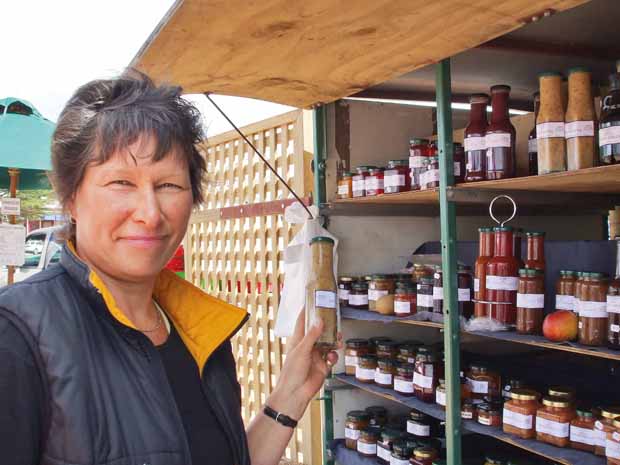 When Marie isn’t making or selling her preserves in her store at Sanson, she is selling them at local food markets.

Marie Mullins is known as the pickle lady, and the secrets to her success lie on the beautiful lifestyle block she calls home.

The pantry shelves at Eclectic Country in Sanson gleam with a spicy array of pickles, chutneys, relishes, jams, jellies, sauces and other goodies.

You can taste to buy Marie Mullins’ popular preserves, starting with the sweet and mild such as basil or japonica jelly, tamarillo or rhubarb and strawberry jam, then sample your way through the sweet and sour, tarter, spicier flavours like mustard veg pickle, chilli jam, pungent kasundi sauce, before finishing (when in season) with a refreshing taste of elderberry cordial.

The lemon honey whizzes out the door, as does the garlic dressing; the raspberry vinegar is equally delicious in salads or on ice cream, and then there’s Marie’s grandmother’s old-fashioned chutney, a sure fire favourite along with brandy fruitcake and shortbread. 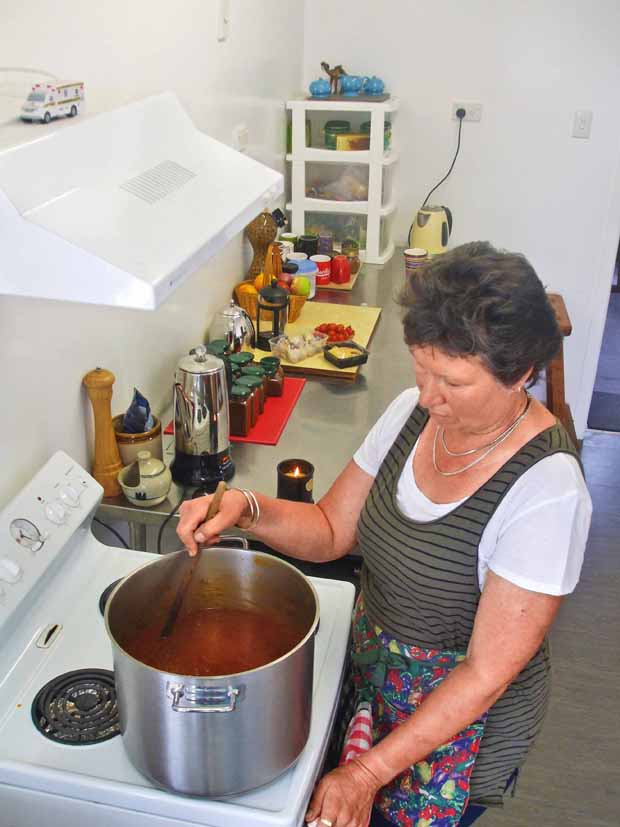 Cooking in the commercial kitchen at the back of the old church.

Marie makes them in her commercial kitchen out the back of a former Methodist Church, and grows a lot of the raw ingredients at home on her family’s lifestyle block. She and her friends also share and swap produce, and at farmers’ markets someone always has excess, so they barter.
“I’ll jelly anything,” Marie says. “A woman gives me her japonica apples and another in Marton gives me crabapples which I add to my own. Aunty Florence in Palmy gives me her blackcurrants. If I get too much I pass it on.” 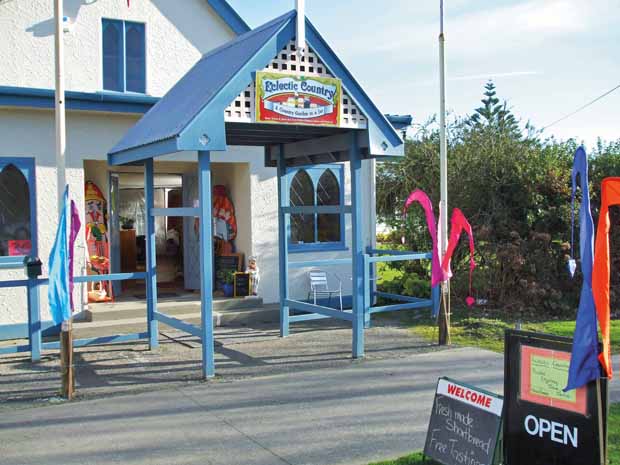 Marie’s store Eclectic Country is on the main highway through Sanson, a 20 minute drive north-west of Palmerston North

Eclectic Country, true to its name, stocks a wide range of goods, including Rawleigh’s products and high quality, hand-crafted products from producers around New Zealand. There is outdoor furniture, rocking chairs from Otago, colourful leather handbags from Auckland, pottery, natural wool knitwear, body products and more.
“I don’t add a lot of commission – I’d rather have people’s interest and customers coming back than charge high prices and people only coming once,” says Marie.

She and husband Phil have put some hard graft into renovating the building, which has progressively morphed since the 1950s into a hall, then two antique shops and finally a sheepskin shop. When Marie found the building was available she was already making pickles, chutneys and jams for farmers’ markets and selling out of her pantry-style cart. It was time to expand. Just a little.

“I think it all got too much for the owner so when I looked through the window and saw the dusty old interior I could see the possibilities. It was rack and ruin – the walls were all rotted at the back and bits were falling off around the place, so I rang the owner and he liked the idea.”
They haggled on and off for several months, until finally it was hers.

The shop is busy and Marie has a few part-time assistants, including Phil, whose help allows her to cook, work in the garden and to spend time with their two grandchildren who love visiting grandma and grandpa on the farm. 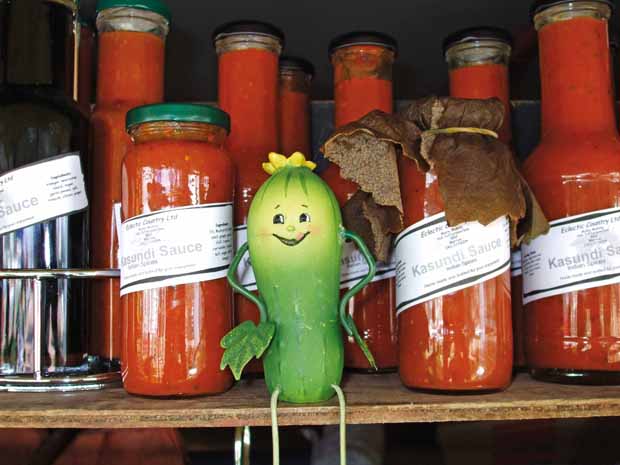 One of Marie’s spicier products is kasundi sauce with ginger, chilli, tumeric and coriander.

She now has a following of customers who come to pick up their favourite pickle, jam or chutney and chat.
“I try and do a bit of cooking while I serve in the shop. Mondays and Tuesdays are the quietest. Otherwise I cook at night – shut the doors at 4pm and just cook.”
“I bought her a miner’s light for Christmas once,” quips Phil.

HOME ON THE RANGE

Twenty years ago, Marie returned to her family roots in Marton with Phil whom she met while working as a waitress in Western Australia. Phil was a professional chef and the couple ran a restaurant business together in Australia.
But when Marie’s brother died she wanted to be close to her immediate family; her Mum (now 88) and her sister, who live in the district.
She grew up helping her Polish/German grandparents on their 150-odd hectare farm in the Manawatu and says she couldn’t wait to get her hands back in the soil and grow her own food.
“Long story short,” (Marie likes to cut to the chase), the couple rented in Marton then bought their lifestyle block on Jeffersons Line, raised two children, and grew and grew – plants, livestock, and a pickle shop.
“We ploughed up the backyard with a friend’s baby tractor and I put it all into garden, my first time gardening in New Zealand. I couldn’t wait to get into the dirt. It’s like mother and child and it’s totally rewarding. I feel so strong with the dirt, and growing is so addictive. Come August September it’s like something is missing if I can’t start growing.”

Her sister and brother-in-law lived down the road so her ‘farm manager’ was nearby.

“Anything I needed to know I’d ask Ian and he’d shoot down on his motorbike and give a hand. He helped to teach me farming. And the people on the other side – the Gervais – used to make the hay. If you want to know something there are always people happy to help you out.”

More stories you might like:
Queenstown painter Tim Wilson celebrates beauty, light and spirituality in his renowned oil landscapes

Their lifestyle block is set against a backdrop of native bush, 9ha (22 acres) of covenanted Crown land. The Greystoke- Kiwitea silt loam soil is very friable, fertile and drains well.

“The farmer never put much fertiliser on it and he didn’t farm it heavily. When we took it over it was like virgin soil. Putting lots of (commercial) fertiliser on the land is not always a good thing.”

They use every available space all over their block. At different times of the year the garden is full of fl ourishing vegetables, fl owers and fruit. There are gherkins, corn, beans, cabbages, choko, zucchini, pumpkin, carrots, garlic, onions lemons and grapefruit, fi gs (fi g and ginger jam), feijoa, Monty’s Surprise apples (chutneys), quince, tamarillos, cape gooseberries, rhubarb, and they all find their way into Marie’s cooking. She even sells the glorious crimson waratah flowers in her shop. 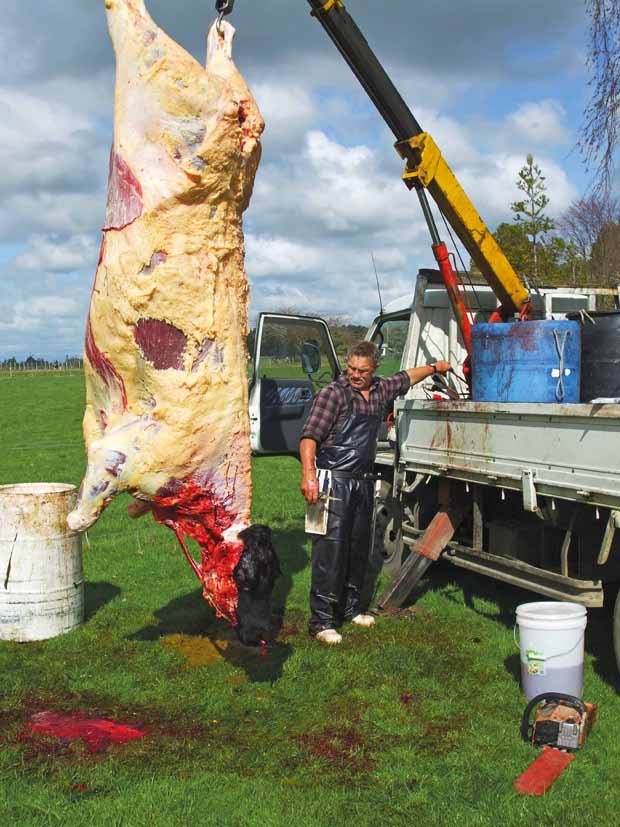 The couple run sheep, 19 at present, and between six and 12 cows and calves with one bull that they reared. The cattle love grapefruit so we take them a feed.
“The bull grew up on a mum here and this is the second lot of calves the mums have had. They are very quiet animals, even the bull. They stay on their mum until they move out of the paddock – they are total sooks. Normally we’d buy in calves about a week old and feed them ourselves but this time it’s all care, no responsibility, the mothers look after them.”

And they delight in watching the animals play.

“One evening the cows were racing up the paddock, udders flying, showing the calves how to do it. And I kept one daggy old ewe because she was so good with the lambs, teaching them to play.”

Marie has handed over the shearing and dagging to a young Taranaki woman and Phil docks the calves and ear tags the cows and sheep.
“A cow had a hernia and Phil put a ring around it and saved it. When it went to the works I think he even had a tear in his eye.”

They keep the freezer full with meat from home kill and have a killing shed for the sheep. They take the carcasses to Feilding to be cut up and packed, something they discovered was well worth it after once doing a rather lumpy job themselves.
The animals need hay and naturally they grow their own. Two to three paddocks yield 100 to 300 bales which they store in an ample barn; any surplus is sold to locals.

“The grass grows so well and I never over-stock. Sometimes neighbours come to the paddock and get it or we store it for them,” Marie says.
They learned early on (from a farming article) never to cut grass in anything but straight lines.

“When you top, you top in straight lines from the road in. You never cut sideways or in funny shapes because that upsets every local. And if you run out of petrol you never leave the tractor in the field overnight. Everybody that goes past keeps tabs on what you are doing,” Phil says.

While his sharp chef knives and some of his expertise come in handy, especially setting up a commercial kitchen, Phil attributes Eclectic Country’s success to the influence of Marie’s mother, grandmother and great grandmother. Phil has a rather dry sense of humour about it all.
“The only influence I had was that we got married and had a wedding cake.”

That brandy fruitcake (with a secret ingredient) is a specialty of Marie’s mother that she now makes to sell at Christmas.
Phil is now retired. He assists with various labour-intensive tasks such as pricking the green walnuts from their tree all over to make pickled walnuts and peeling vast quantities of garlic. Even the bright red waratah flowers are cut and sold.

Marie’s rural family traditions stand her in good stead on their lifestyle block and she says they would be self-sufficient in food if they didn’t have the shop. She grew up on 8ha (20 acres) and her father worked at Wright Stephensons but she says she inherited the tradition of growing her own food and cooking from her grandmother, who immigrated to New Zealand from Germany with her parents.
“Grandma was a very hard worker. If she wasn’t in the garden she was cooking, like me. Something always rubs off, what you’ve enjoyed when you were younger, it was a marvelous time. She taught me how to work, although I didn’t enjoy it a lot then, but she made it fun.”

She remembers the large gardens and the coal range that was in continual use.

“There was always the smell of food cooking. Grandma grew everything in her garden. I went and stayed with her for as long as I can remember. Every Sunday there would be a big family gathering at their place or at another family member’s place. We were like the Italians, very family-orientated. When Grandma cooked she’d always share with other people – sauerkraut and bacon, quark with caraway seeds, pig’s head sausage and brawn, sour cucumbers and gherkins, and of course she made her own butter.”

Grandma raised birds, including hens, peacocks, pheasants, and there was always a turkey for Christmas.

“Grandad built an aviary to put them all in, but chooks were a staple. She used to pluck them herself and they always ate their own. That generation worked really, really hard – they had either jam and bread or butter and bread but never the both.”
Marie continues that tradition of hard work, but you get the impression that work is also a kind of play, her way of realising her dream of being the pickle lady.