Dion Kilminster produces top-quality beef and lamb — but the road to success constantly challenges him.

It was by chance that farmer-butcher Dion Kilmister met marketer Ali Scott in a Wellington pub on St Patrick’s Day nine years ago. But together, they’ve overcome the odds in more ways than one.

This year, their mixed box of gourmet beef and lamb took the Supreme Champion gong at the 2021 Outstanding NZ Food Producers Awards. “Pure beefiness,” commented one of the judges of the pack, which includes many different cuts of meat as well as gourmet sausages.

In 2018’s honours (see NZ Life & Leisure, May/June 2018), Dion and Ali’s Homegrown Farm Fresh Meats won the Ara Wines Paddock Champion award for its lamb. Now trading as Homegrown Butcher, Deli and Pantry, the couple has added beef to the table. And not just any beef. Their speckle park cattle are a mix of shorthorn, angus and british white, which Dion and Ali trademarked as Angus Park a year ago. “When we slaughtered the first to eat ourselves, it was quite a different eating experience — a different texture, soft, juicy and full of flavour,” says Ali. 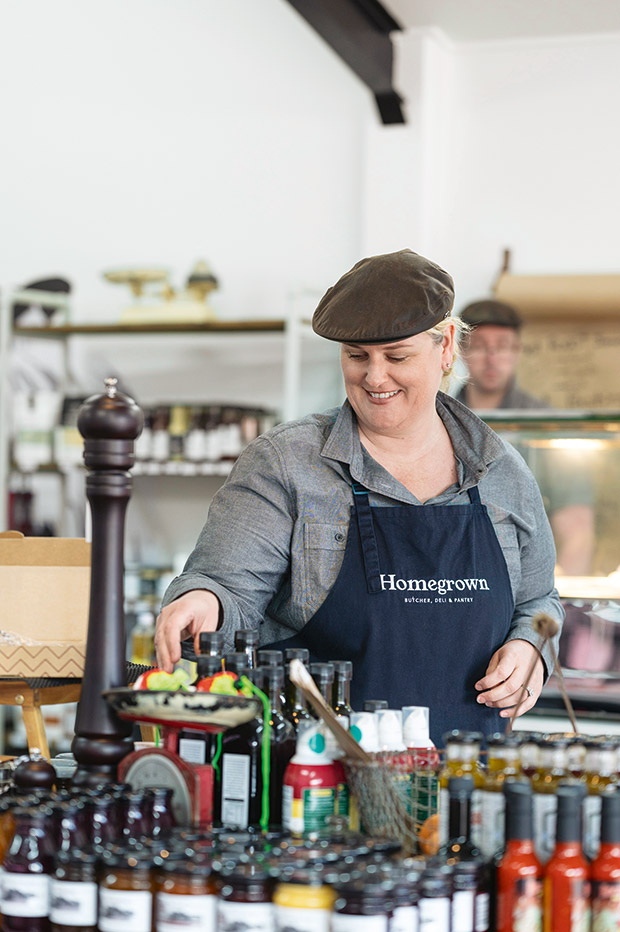 Like the romney-texel-charollais-cross sheep, the cattle were also selected for their meat-to-bone ratio. “We knew there was something more to this lamb when we tried it,” says Dion. Rather than the usual fat layer on the outside, the outer fat on Ali and Dion’s lambs is thin, with more spread throughout. This creates mouth-wateringly succulent meat with a caramelized sweetness all the way through, which impressed the judges.

“We have very specific breeds and process only females,” adds Dion. He reckons the oestrogen in ewe lambs produces more tender meat.

Dion and Ali currently have 1500 cattle and 15,000 sheep on three farms spread over 250 kilometres, deliberately chosen to decrease the threats posed by climate change. Chris, Dion’s older brother, now manages the original 960-hectare farm in Bideford in Wairarapa. Another brother, Kerry, manages the leased 1100-hectare property on Wellington’s Belmont Park Farm. With family running the properties, it’s a win-win, as farm staff are hard to find. Chris and Kerry work as contract managers, which means they earn more than just a wage. Dion and Ali are now based in Pahiatua, at the end of the Pahiatua Track, where they have 282 hectares. After spending two years setting up a new butcher’s shop deli and pantry in Masterton, Dion’s back on the farm most of the time. He’s doing what he loves most, finishing off the cattle and sheep. This year, the finishing has been done on the Pahiatua property, but the location depends on the food supply. “Bideford is a drought area, whereas Pahiatua is summer-safe,” explains Dion.

“He’s a real finisher of animals,” adds Ali. And part of the secret to the flavour of their meat is the chicory-clover herb mix their animals graze on, which “adds herbs before cooking and makes the fat quite white”.

Dion, 49, used to own a truck to transport the livestock to the abattoirs at Ngāūranga, but he’s relinquished that role because he knows the drivers and trusts they will keep the animals as stress-free as possible. Although Ali says he hankers for another truck. The couple took over the former butcher’s shop six months before the Covid-19 lockdown early last year. “With Covid, we had to move the business to an online store and we gave all our Wairarapa locals free delivery, even if it was only a couple of meals to get them through. We did not take the wage subsidy even though our doors had to shut.”

Dion and Ali have taken on two apprentices and will be teaching them nose-to-tail butchery (using the entire animal). They realized that full-carcass butchery is a dying art and qualified staff were hard to find. The eco-conscious duo ensures minimal waste — what’s left over goes into farm-dog tucker, and the bones are sold for bone broths. 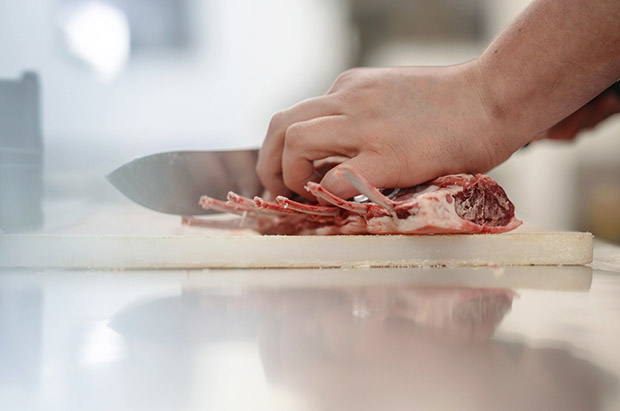 Ali works in the shop four days a week and Dion one to two days. They love nothing more than donning their aprons every Saturday morning, serving customers and showcasing their product. They’re also producing smallgoods and sell a selection of gourmet produce.

Life is busy, and that’s how they love it. “There’s always something new, and we like to keep ahead of the game.” That includes ensuring they are protecting their environment for future generations. “We know we are only caretakers of the land,” says Ali. The land is fertilized, but we take great care to ensure the rivers are protected. “We don’t blanket-treat animals with chemicals and will only treat if there is a reason.”

Ten years ago, life couldn’t have been worse for Dion. In four years, he lost nine members of his family, including his mother and father. But dealing with the death of his 39-year-old wife, Maria, from cancer and his only child, Jayden, in a freak vehicle accident at 15 was unimaginable. (He has a 32-year-old stepdaughter, Alishia, in Perth.) There are still triggers that overwhelm him. “You don’t get over it; you just have to learn to deal with it.” Dion was staunch and tried to bury the pain for a long time, but last year’s lockdown made it all too real. The pair had to work 16-hour days to keep the business going. Because they were open only online, it meant (aside from Ali to talk to) Dion worked on his own for seven weeks, often also doing the deliveries.
“After that, he sought help from the Rural Support Trust,” explains Ali. “There’s only so much talking to animals you can do.” Now both are keen supporters of the service, which promotes mental wellness within the farming community.

The lockdown at least allowed time for Ali to work on marketing. She applied the same core principles to Homegrown that she had used in previous marketing jobs, including Beef + Lamb New Zealand and New Zealand Rugby. The use of Facebook and Instagram comes naturally to her, if not to Dion. Her 23-year-old son, Blair, a graphic designer, worked on designing the new website and logo. Ali, who is 47, also has a 23-year-old daughter. 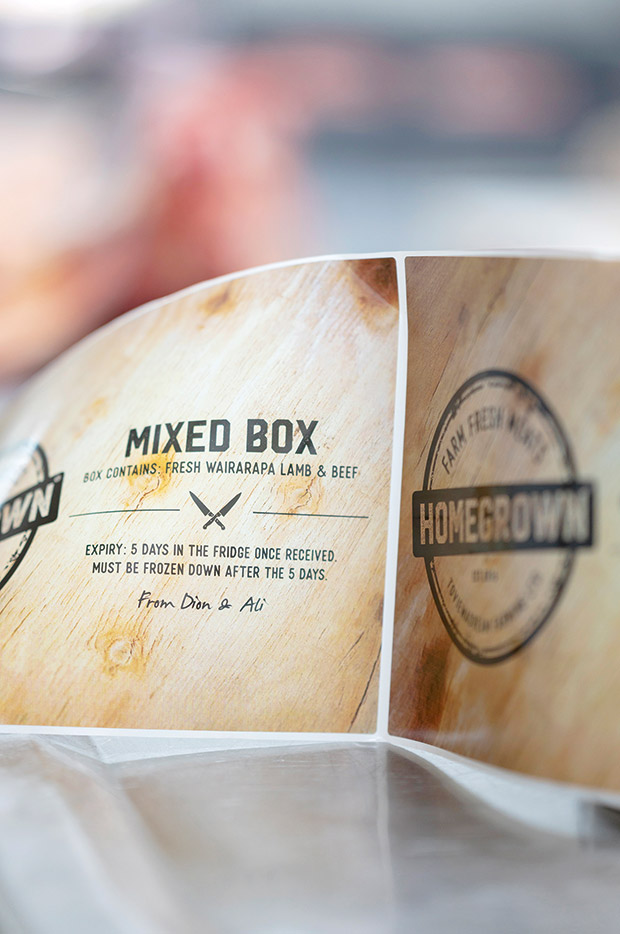 As far as farming goes, Dion and Ali have been consolidating for the past two years, but now they’re tendering for more local farmland for extra summer grazing. It’s part of their 10-year-plan — which included sneaking off to Rarotonga two years ago to get married and buying a caravan to take time off now and then.