When temperatures soar, the hum of air conditioning and refrigeration units sound an ominous chorus. This company is offering a greener solution.

The effort to keep rooms and food cool is the overlooked menace of climate change, accounting for about 10 per cent of global carbon dioxide emissions, according to the British think tank, the Birmingham Energy Institute. That is three times the amount produced by aviation and shipping combined.

There’s a double whammy when it comes to refrigeration, says Matthew Darby, the founder of Auckland-based EcoChill, a major supplier of refrigeration units to the country’s supermarkets and fruit and vegetable packing houses.

In many parts of the world, the electricity used to power refrigerators comes from high-emitting coal or gas-fired power stations. But hydrofluorocarbons (HFC), the chemicals used in refrigeration and air-conditioning systems to absorb heat and cool things down, also act as a greenhouse gas. Their molecules are thousands of times as effective as CO² at trapping heat, even if they don’t hang around in the atmosphere for nearly as long.

Refrigerators leak some of their contents as gas, particularly as they get older, creating a real problem for the planet. EcoChill pioneered local use of natural refrigerants in 2012 with CO² ironically proving to be the best chilling alternative of choice. “It was one of the original refrigerants used around 100 years ago, so it has gone full circle,” says Darby.

The cleaner refrigeration systems are gaining acceptance in the retail world, but Matthew and his wife Megan are also targeting the farming sector with their spin-off company, Cold Energy Technology. 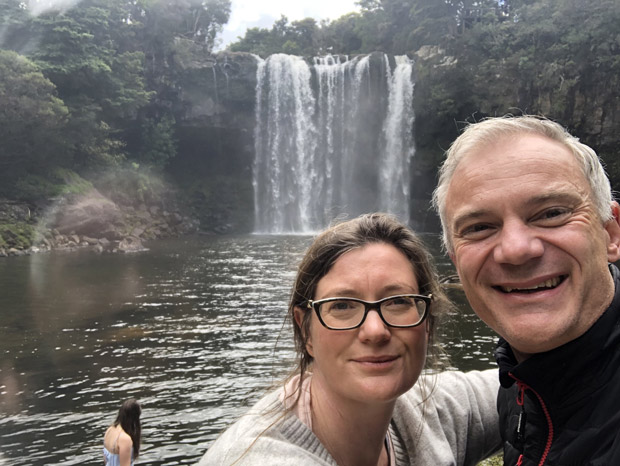 “It takes a large amount of energy to make milk cold,” explains Matthew. “At the same time, farmers are spending energy heating up water to wash down the cowshed and equipment.”

Cold Energy Technology has come up with the patented ECO2Dairy, a unit that can chill down milk to two degrees Celsius within 30 seconds and uses the heat energy extracted from the milk to heat water to 85 degrees Celsius, so it’s suitable for the twice-daily cowshed hose down.

Matthew says a conventional HFC refrigeration unit on a typical farm leaks 24 per cent of its refrigerant in a year. Given its potency, that’s the equivalent of about 19,767 kilogrammes of CO².

ECO2Dairy’s equivalent unit, working under the same conditions, produces just five kilogrammes of CO² equivalent over a year. The unit itself is also up to 40 per cent more energy-efficient to run.

“Nothing meets those specifications; we are in a league of our own,” says Matthew, who has specialized in refrigeration since the late 1980s, when he started as an apprentice at Kooline Refrigeration.

With farmers under pressure to cut their emissions, Matthew says the technology, which sells for a 20 per cent premium but typically earns that back within two years, can help them cut emissions and save money. “Every farm usually has a couple of pieces of refrigeration equipment to cool down the milk. There’s a critical tipping point around the cost that made a big difference in retail, and that is coming to the farming industry, too.”

With HFCs in the process of being phased out ahead of a total ban set for 2035, the impetus to change is real. The Darbys have been selling their ECO2Dairy units to farmers for four years and last month kicked off a PledgeMe crowdfunding campaign to expand manufacturing capacity for the units.

“The mission is to bring natural refrigerants to the fore,” says Dardy. “It’s not like there’s a silver bullet to nail this in one go. But every little bit helps.” coldenergy.co.nz

“Because cooling is invisible, people don’t think about it. You must identify what the challenges are and what the solution you offer is. Getting used to new technology is always difficult for people.” — Megan

“The Intergovernmental Panel on Climate Change report showed we need to take action now. They’ve always measured the global warming potential of refrigerants for more than 100 years. Now they are saying, ‘We don’t have 100 years. We actually need to measure them over 20 years.’” — Megan

“We’ve started a campaign through PledgeMe. The whole idea of putting your head above the parapet and saying, ‘Hey, we have this amazing piece of technology, is a bit foreign to me.’” — Matthew