How a family of four ditched cling film for good Lunchbox snacks, leftovers and half-eaten avocados can all be kept fresh plastic free with a few simple swaps.

It wasn’t long ago Amy Harrison would reach for cling film to wrap her daughters’ peanut butter sandwiches. School lunchboxes would arrive home sandwich-less, but crumpled balls of plastic remained.

A visit to a plastic-free home inspired a change for the Harrisons. “Last Christmas we went to Melbourne to stay with my sister-in-law who’s fully plastic free, and I realised a lot of the changes she’d made, we could make too.”

Six months on, there’s not a roll of cling film to be found in Amy’s Auckland home. Keara and Mika (13 and 10) use lunchboxes with built-in compartments for nuts, raisins and fruit. Sandwiches are wrapped in beeswax wraps or reusable baking paper, and leftovers in the fridge are stored in snap lock containers. Amy and her husband pack their work lunches in reusable Eco Saint bags “The hardest thing was the kids’ school lunches– even after we ditched cling film we still ended up with plastic.” Amy says her youngest would often come home with someone else’s plastic in her lunchbox from sharing food at school. She’s since made a rule that no cling film or plastic wrappers come into the house.

“It took a while to change our habits, and at first my girls said, ‘It’s too hard, we can’t do it!’ But I’m such an animal and ocean lover so I showed them pretty awful stuff on plastic pollution, and they just thought it was crazy. They understand the impact it has.”

Amy says they haven’t eliminated all forms of plastic, but they’re on the right path. Reusable bags are used for supermarket runs, their rubbish bags are compostable, and toilet paper comes from a subscription service called Smart Ass– toilet tissue made from bamboo with recyclable packaging. 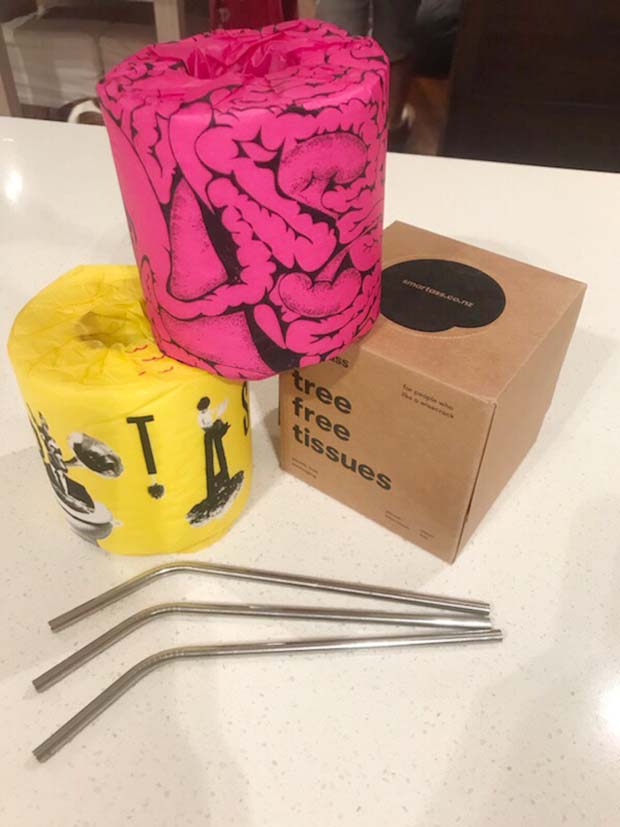 “A lot of people put quitting plastic in the ‘too hard’ basket, but just identify where you’re using the most cling film or plastic and find some alternatives to use. Ours was school lunches. It might cost a little bit of money, but the alternatives will last.”

Love Food Hate Waste (a national initiative to reduce food waste) project manager Jenny Marshall says cling film has been relied on for so long because of its effectiveness. “There’s a reason why it’s so popular.” Research last year by the University of Otago found, for some foods, cling wrap was generally the most effective way to keep food freshest for longest.

“To make food last longer you need to limit exposure to oxygen and have the right amount of moisture. Cling film acts as a barrier, and that’s when it can work really well.” But rest assured, Jenny says there are cling film-free methods that work a treat, too.

Beeswax wraps are great to seal sandwiches and snacks in that will be eaten within a couple of hours. They can also be wrapped tightly around pumpkin in the fridge, but remove the seeds first as they tend to make the pumpkin go mouldier faster.

Instead of binding avocado halves in cling film, sit them in a sealed container or jar. Carrots and celery also last longer when they’re put in an airtight container with a paper towel on the bottom. The towel sucks up excess moisture, and if the vegetables get too dry, it releases that moisture back out, Jenny explains. The container prevents oxygen from getting in, keeping the veggies fresh and crunchy.

Drawers with temperature control settings (often in newer fridges) also come in handy for cling film-free food storage. “Personally I try to go plastic bag free with fruit and veggies, and everything lasts much longer in these drawers because they act like an airtight container. Just make sure to keep your fruit in one drawer and vegetables in the other, then they’ll both last longer.”

Jenny urges people taking the plastic free plunge not to dump plastic they already own. “I know of some people who go plastic free and throw out their containers and cling wrap. But use the Tupperware you already have, and if you have some cling wrap in the cupboard, use that up too. We’ve got be more sustainable, but sometimes that means using up the unsustainable things we’ve bought in the past.”

Nicole Barratt: How I went plastic-free for a month (it’s not as hard as you think – promise)

Make your own beeswax food wraps

More stories you might like:
Family of five living large in a 20sqm off-grid tiny house
Discuss This Article