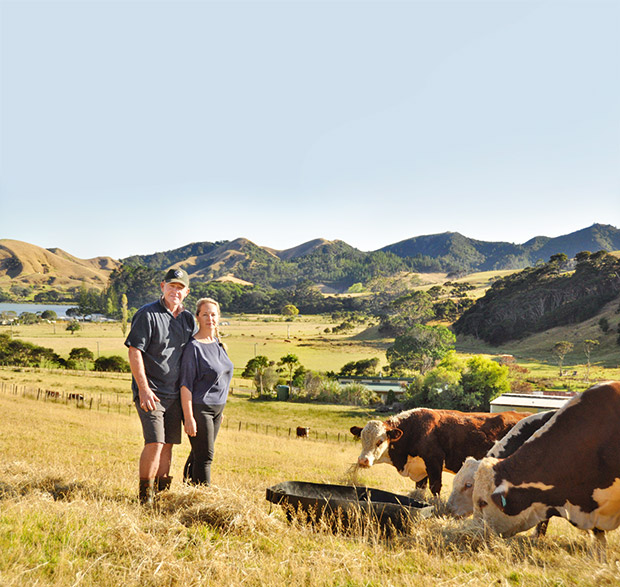 The couple’s Hereford bulls enjoying a trough of dried, chipped seaweed and salt.

When wild winds rage across the top of the Hauraki Gulf, it’s time for these farmers to harvest a special crop.

When the wild winds blow, Colin Caldwell and Hannah White are up at daybreak to harvest the spoils. The couple run cattle on their farm, near the isolated tip of the Coromandel Peninsula, but after big storms, they start their second job.

Collecting seaweed is a substantial part of Colin and Hannah’s lifestyle. Colin is the third generation of his family to run the farm. It’s a two-hour drive from Thames to the idyllic Port Charles, mostly on a dusty dirt road.

They graze 300 Herefords on land cleared of bush and gorse by Colin’s father back in the 1930s. But an isolated beef farm isn’t economical. That led Colin to diversify into seaweed for fertiliser and supplements, specifically the native Ecklonia radiata, which washes ashore on the local beaches. From years of using it himself, he knows the benefits it brings to pasture and animal health. Now, he collects and distributes it to other farmers and growers who use it to brew a concentrated seaweed extract.

The seaweed ‘tea’ can be applied to the soil, sprayed on plants, and fed to animals. Seaweed is highly nutritious for livestock, and new research shows one type can reduce methane emissions in sheep and cattle by up to 80 percent.

Ecklonia radiata grows like an underwater forest in deep water. It can grow up to 2m tall in ideal conditions, although it averages closer to a metre. The clear water between Coromandel and Great Barrier Island provides maximum sunlight to maximum depth and Ecklonia radiata flourishes.

“We have a pristine environment,” says Colin. “No plantation forestry, no intensive dairy farming, lots of native bush and some low-input beef cattle farming. The water that drains into our harbours is high quality, and the Colville Channel is flushed twice a day with the tides.” 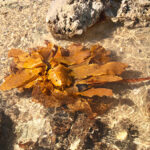 Seaweeds are algae, not plants. Algae gather nutrients through their blades from the environment. However, like plants, they use sunlight for photosynthesis. 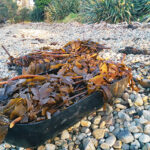 It takes about two years for Ecklonia radiata to mature and release its spores (seeds). Its holdfast – the base that holds it fast to the seabed – weakens, and it’s swept away to make room for new growth. After nine years, Colin knows exactly which winds and tides dislodge it from the seabed and the beaches where it will wash ashore.

“Beached seaweed is part of the coastal nutrient cycle. We only harvest about a third of what’s on the accessible beaches, and only about one-tenth of our local coastline is accessible, so our impact on the environment is minimal and sustainable.”

It’s a race to get a good quality harvest. Little invertebrates and crabs live in beach-cast seaweed, and a fly (befittingly called the seaweed fly) lays its eggs among the fresh blades. The eggs hatch into larvae, turning Ecklonia radiata into a pile of mush within 24 hours.

Ecklonia radiata is also sensitive to ultraviolet light. When lying in the sun, it starts to degrade quickly and needs to be collected as soon as possible.

Colin collects seaweed from September to May, when long sunlight hours have helped the Ecklonia radiata grow to a long length, but before winter storms damage it. Ecklonia radiata has a stype (main stem) that holds many of its beneficial moisture-retaining compounds, but the nutrients are lost to the sea if it’s broken. 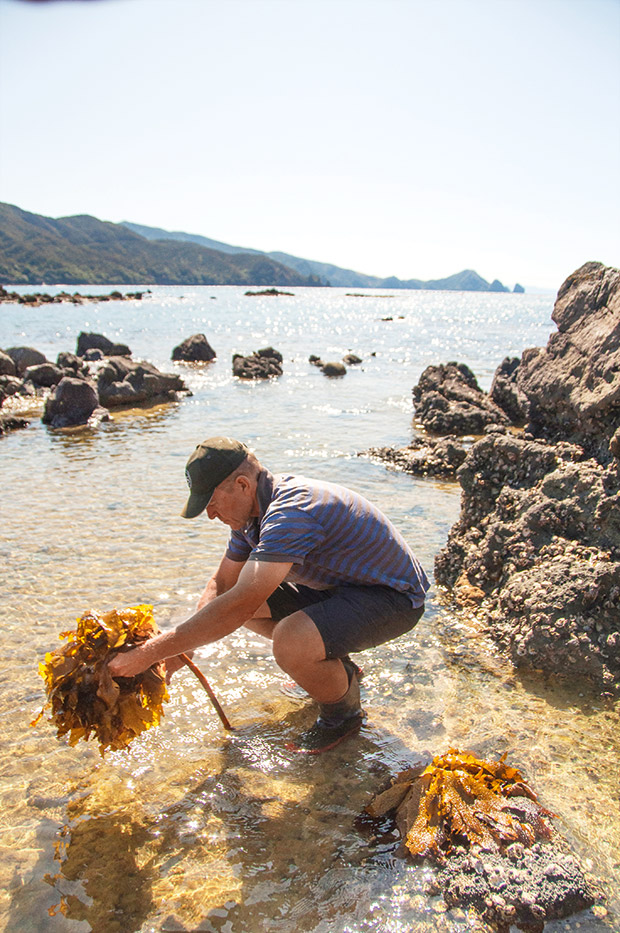 Colin says it’s vital to:
• harvest the algae fully intact before the sun affects it, or the seaweed fly damages it;
• dehydrate it quickly in their special drying sheds.

He selects the best seaweed, then dries it quickly. They used to drape it over fences to dry in the sun, but it was too vulnerable to the weather and resulted in an inferior product. “It was like trying to make hay 10 months of the year”, says Colin. “You’d see a shower come across the valley, and then watch the nutrients run off the fences.”

Now he has dedicated drying sheds which utilise the prevailing winds and afternoon sun. “The best winds are the cold, dry southerlies from Ruapehu, or at low tide, the sand warms the breeze coming in from the bay.”

The sheds hold 4-5 tonnes of seaweed, draped over racks and hanging from the ceiling. After 3-4 good drying days, 75% of the moisture has evaporated, and the seaweed can be chipped, shrink-wrapped (to stop it rehydrating), and sent directly to customers at an economical price. 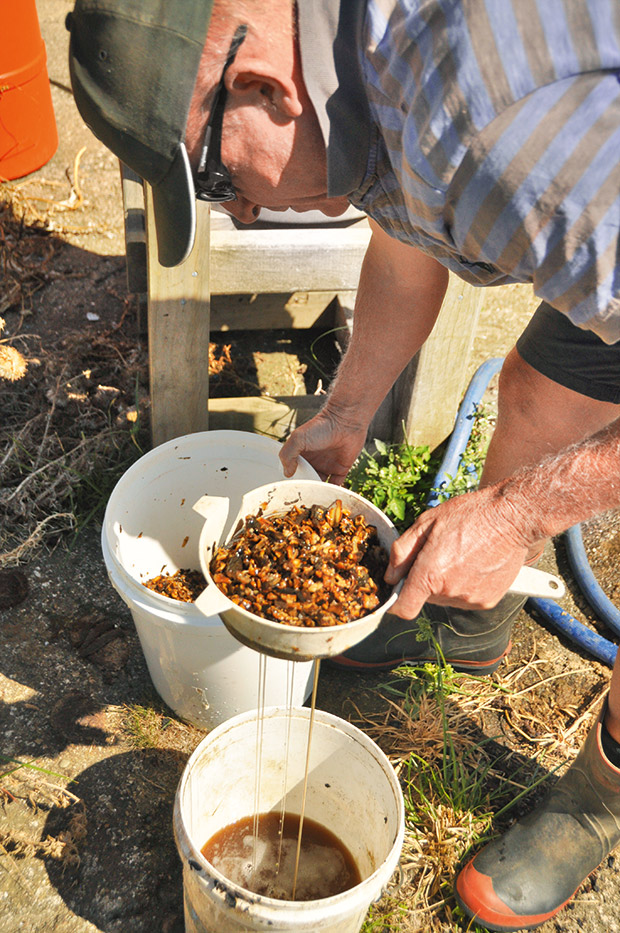 He originally supplied his harvest to a retailer, but after seven years of rising costs and static returns, he decided to go it alone in 2018. Dehydrating and chipping the seaweed preserves it, reduces transportation costs, and makes it easier to extract nutrients.

When soaked in water to make an extract, the seaweed rehydrates, the cell walls rupture, and the internal compounds are released (similar to what happens when you make a cup of tea).

WHY SEAWEED IS PART OF A GOOD FARMING SYSTEM

Colin and his father Keith used chemical fertilisers on the farm for a long time. Fifteen years ago, Colin began questioning the viability, sustainability, and the long-term effects of their soil management. “My grandmother had an amazing garden, in which she always used seaweed. And I thought, well, isn’t farming just a different type of gardening?”

That was the beginning of his journey into regenerative pasture management and the benefits of seaweed. Seaweed isn’t a silver bullet, says Colin, and it’s only one of the products he uses, but research shows it has unique benefits above other types of fertiliser. 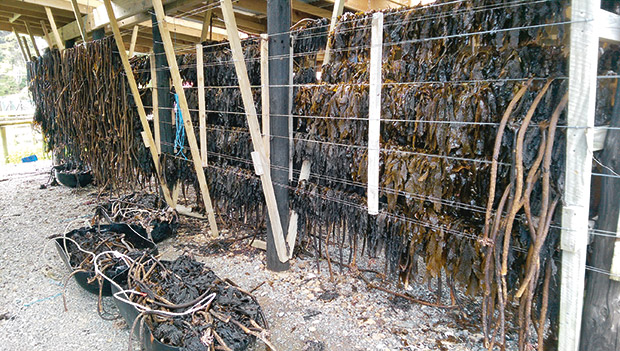 The couple can dry 4-5 tonnes of seaweed in special sheds.

Can improve the flavour of some vegetables and fruit by increasing sugar-acid ratios.

Can ‘harden’ a plant, increasing the resistance of new growth to cold weather, and strengthen the skin of a vegetable or fruit, meaning fewer losses from damage.

Seaweed can also speed up seed germination and plant growth rate as it contains plant growth hormones. That’s great for some crops but not others, such as pasture for hay going to seed too early. But its most significant contribution is to the soil microbiology. Seaweed feeds soil bacteria, which in turn feed and nurture plants. If you apply it right, says Colin, seaweed can work magic. 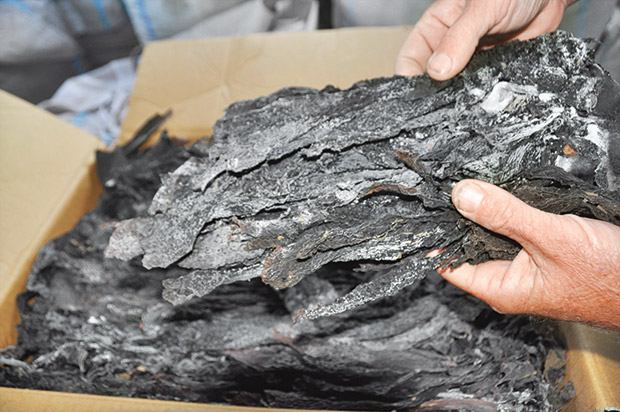 The white powder on dried seaweed is a natural flavour enhancer. Colin wraps it around a pork roast and puts it in the slow cooker.

He likens soil bacteria to humans. It’s no good throwing a feast once a year and expecting them to flourish. The key is to feed them little and often, at the right time. Bacteria hibernate when it’s too cold (less than 10°C), too wet, or too dry. Colin recommends using a soil thermometer to regularly test the same patch of soil, then apply a seaweed tea when the temperature and conditions are right.

NZ waters grow about 900 species of seaweed. None are toxic, but there are only about five that most people are familiar with: bull kelp, bladder kelp, karengo (a native red seaweed), sea lettuce, and wakame. The dried seaweed is chipped for easy packaging.

Seaweeds range from light green to brown to red. Ecklonia radiata is one of the brownest of the brown seaweeds. Brown seaweeds contain a wide range of compounds, micro-nutrients, and plant growth stimulators, including: 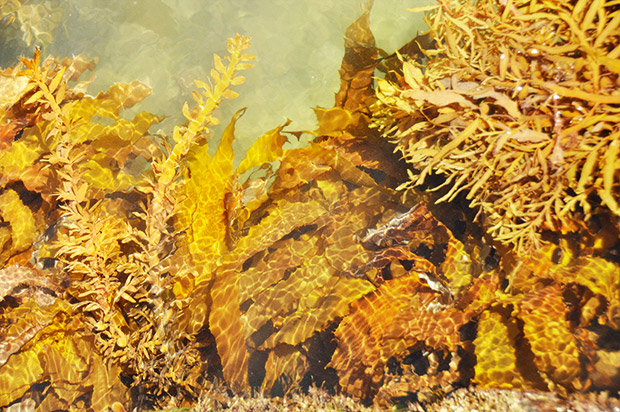 Snapper, invertebrates, and crustaceans feed on Ecklonia radiata, and it’s the main diet of kina (sea urchins). It’s abundant in NZ in waters where the average temperature is over 10°C.

Also includes: vitamins A, C, E, B1, B2, B3, B5, B12, folate, fucozanthin, chlorine, amino acids, cytokinins, auxins, phlorotannin, and mannitol.

HOW TO BREW SEAWEED TEA

You can order packets of dehydrated seaweed from Colin, or use any seaweed you collect to make seaweed tea. Take a picnic in a chilli bin to the beach, and refill it with seaweed to bring home. The bin keeps the seaweed cool and catches any water or creepy crawlies.

Add 1kg dried seaweed to 20 litres of clean rainwater in a clean barrel, which should not be in direct sunlight. Stir every few days for 2-4 weeks.

A good brew is ready when it has a pleasant, sweet smell and a slightly frothy head. HOW TO USE IT

Fruit trees – dilute 1:100 with water, apply at least four times a year when the temperature is above 10°C, particularly during fruit formation.

Pasture – 5 litres per hectare (diluted in approx. 200l water) applied four times a year when the temperature is above 10°C.

THE LEGAL SIDE OF HARVESTING

There are no limits if you’re harvesting seaweed for personal use, so long as the seaweed is ‘free in the environment’, either adrift in the ocean or washed up on the beach. You can’t pick living seaweed from the seabed as it will upset the marine food chain.

Commercial harvesting is carried out under strict conditions.