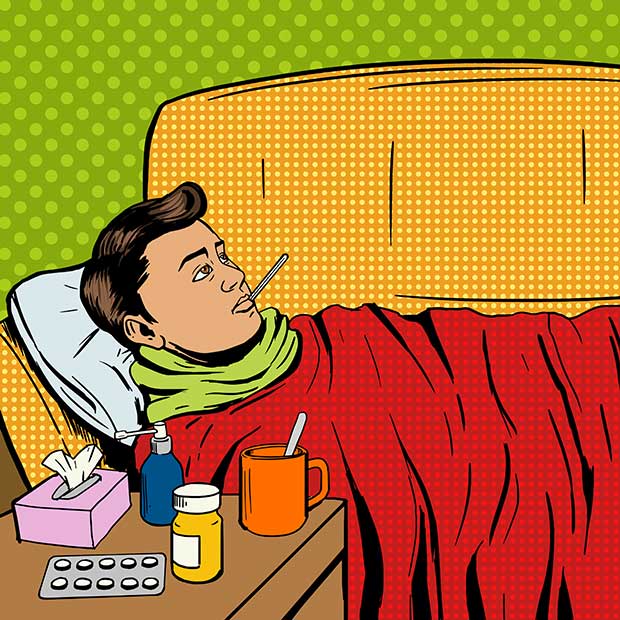 Jim comes down with the flu and has a hard time receiving any sympathy from his family.

It’s been a long three weeks; much of it spent sleeping on the couch.

A nagging cough received no sympathy in bed with my wife making it clear from the start that if I was going to cough up a lung I could do it in the lounge.

So there I’ve been, furled in a sleeping bag, hacking away like an 80-year-old who smoked two packs a day.

It’s fair enough, because I was disturbing her sleep, but what baffles is that when she is sick and coughing it’s still me who heads to the sofa!

I’ve tried to suffer in silence but it seems I haven’t done a very good job.

The eldest daughter asked early on in this vicious case of man flu what I would say to her if she felt as crook as I was feeling.

“I’d take you to the doctor,” I wheezed in reply. She gave me her mother’s knowing look and wandered away.

It was her sister, though, who made it happen but only because she fell sick herself.

As she was poked and prodded by the doctor, I sat beside her in fits of coughing that gave me a headache.

So it was no surprise when the doctor turned to me and said, “now, what about you?”.

I tried to resist, but it was futile and when he declared I was in a worse state than my daughter, it was greeted with mixed emotions.

It was proof, of course, that I was gravely ill. So sick that most people would surely have perished. How could one so ill have been banished to the couch?
I had a guilt trip to play.

But then it was also evidence, yet again, that I should have gone to the doctor’s several weeks earlier, when I first felt sick – and about the same time that uncaring wife of mine suggested I seek medical help.

Instead I had, apparently, moped around the house, ultimately spreading whatever it is I have to our youngest daughter.

And then, just when we all thought it was behind us, there was a night of throwing up. Apparently I’m not very quiet at that either. “You woke me up Dad,” the youngest said. “But that’s ok. It was quite funny.” It was no laughing matter for others though.

“When I’m sick I just put my head down and get on with it,” my wife declared. “You are one of the neediest people there is when you’re sick, but then you’re not alone there. Talk to any other wife.”

It was a withering assault and in my fragile state I was unable to respond. Besides, she had a point.

This is a woman who, we now suspect, coped with swine flu and two children while I tripped around South Africa with the All Blacks about eight years ago.

And she’s handled the girls’ chickenpox while I was away working and dealt with severe asthma attacks with the youngest.

Give her a sick child and she is a wonderful nurse, but if there is blood, well that’s when they all come calling for Dad.

There’s no decent explanation for why blokes are so useless at going to the doctors apart from a belief that, given a few days, we’ll be well again.

Sometimes that works and other times…well let’s just say I know every dent in the sofa.

But then we are conditioned by our wives to suffer in silence.

Soon after the youngest was born I came home from a basketball game nursing a very sore and swollen finger.

It may have been just a sprain but could also have been dislocated or broken – let’s just agree it was sore.

Sitting on the couch I made the silly mistake of letting out an involuntary moan of pain.

“What’s wrong,” my wife asked with that sort of tone husbands know suggests no good will come from this conversation.

Still, bravely, foolishly, I offered up that I had hurt my finger playing basketball. “It might be broken,” I offered.

I slept on the couch that night too.