Jim juggles fatherhood with the 4-hour time difference at the Rugby World Cup.

In the space of a 10-minute chat I showed them my room, was told-off twice and got into a debate about having too many clothes in not-enough space. And been photographed as I was pulling a stupid face.

This is my sixth Rugby World Cup and fifth away from home and the advent of video calling has made it more tolerable, but still not easy, to be away. No one turns down the chance to cover a World Cup, especially in a city as vibrant, safe and welcoming as Tokyo, yet the flip side is that I miss a lot at home.

It is the same for anyone whose work involves long-distance travel and luckily my heavy-travel days are behind me. There were years during which I was away for four months (not all at once, I might add) and with the girls growing so fast they often seemed different when I returned.

Thankfully, touch wood, we have moved past the days when my trips seemed to coincide with illness or issues at home. The eldest had chickenpox while I was in Britain in 2003 and the youngest decided she wanted to arrive early while I was still heading home from South Africa in 2006. Thankfully it was a false alarm and I did get there in time for the real deal.

She was in fine form this time when I called home the morning of the All Blacks quarter-final against Ireland, chastising me for being in an “immaturely laughing mood”. She also took me to task for poking fun at one of her mates, reminding me of my own mantra (inherited from Mum) that ‘If you have nothing good to say, say nothing’. So I stayed quiet as she explained why she needed another chest of drawers to accommodate all her clothes.

“You could always get rid of some,” I suggested.

“Well, we know that’s not going to happen,” came the reply.

“What about throwing out all the pants with rips in them,” I said, mocking the trend for buying jeans my mum would have slapped a patch on.

There are recurring themes in our conversations that, for some reason, appeal to me more than her. She is, so it seems, tired of me correcting her use of ‘your’ in text messages when she actually means ‘you’re’, but not so tired as to get it right. I hope I never tire of our chats because I know the clock is against me.

They are growing up too fast; the eldest finishes school in a month and is already accepted into the halls of residence at university. Where has that little girl gone? It’s a cliché I know, but it seems like only yesterday when my wife brought her, aged one, to see me in Melbourne during the 2003 World Cup.

My first World Cup was in 1999 and although not married, I had popped the question and our wedding was to be the following year. My phone calls home cost my then-employer (a newspaper) a small fortune. There was no internet, at least none that we used, I didn’t have email and there was certainly no video calling.

Stories were filed back to New Zealand via a dial-up connection as I sat, waiting for the beeps and buzzing to stop and a connection to be made.

Now everything is instantaneous. 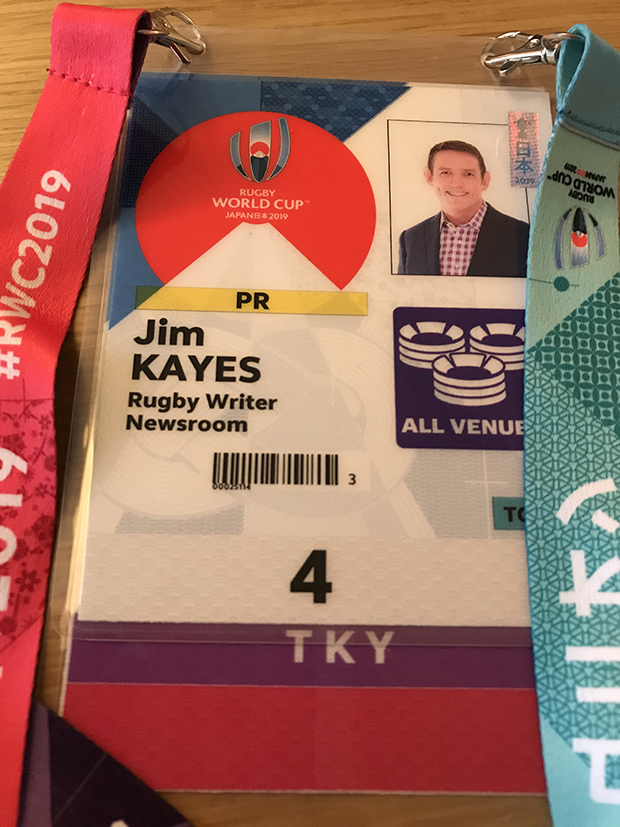 That also means distance no longer protects me from domestic disputes at home. So, when the youngest was caught wearing her sister’s togs to surf training I was brought into the debate over whether they were fair game as they’d been left in the laundry.

It quickly became apparent that each is equally as guilty of pinching the other’s clothes and shoes so the conversation died a natural death.

I had warned the girls that with a four-hour time difference in Japan I didn’t need a call or text from them before 10am New Zealand time. But with the jetlag, I woke early on the second day so I called home.

“Why are you ringing at this time?” the youngest asked. I explained how I was still running on NZ time but she was far from impressed.

“It’s too early for us to talk because I haven’t got my stories sorted yet,” she protested.

I called back. With the clock ticking on their time at home it’s worth the wait.

Jim Kayes’ Blog: Out of pocket