After being mocked on-air for his hit-and-miss fashion, Jim gets some clothing coaching from his girls

We were just popping to the shops when the youngest piped up with a rare complimentary assessment of what I was wearing.
“Dad,” she said, “ I must say you’re rocking the clothes. The sports shoes go with the track pants and then there’s a contrasting sweatshirt. Well done you, I’m proud.”
I cast my eyes down to see what was so remarkable about what I was wearing that it prompted such a glowing review from the 11 year-old and even now have no idea. I’d just thrown on stuff that was comfortable.
It’s not so much that I get dressed in the dark, it’s more that I really have no idea about fashion and what goes with what.

For the last decade I’ve been lucky in a professional sense because wonderfully talented women, initially from TV3 and now from Sky TV, buy many of my clothes for me.
But even that hasn’t always gone smoothly. I had a two-tone blue shirt on the Paul Henry show that gave Paul plenty of room for ribbing. 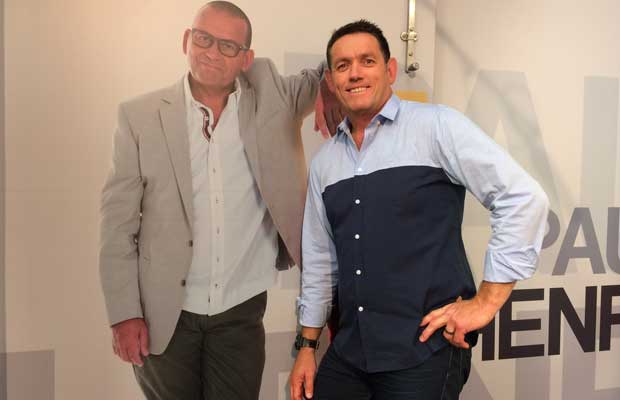 The first time I wore it he asked where the rodeo was. It didn’t deter me though. I liked that shirt and wore it often including our final day together.
My wife, who could wear a rubbish bag and make it look good, has had stern words with me over the 24 years we’ve been together and has secretly staged interventions. When we were flatting in Wellington my favourite sweatshirt and track pants disappeared. They were hard to miss as the top was yellow and the bottoms a sort of purple, and I often wore them together.
I asked if she had thrown them out. She said she hadn’t and I must admit she was telling the truth. Instead she had folded them neatly inside two cushion covers on the couch – cushions I would, for years, rest my head on for a wee afternoon nap.
But there’s one piece of clothing she can’t touch. It’s a check shirt (she now detests such things) she bought for my birthday, when we were first together. It was very cool and I still have it, and though it’s in a shabby state, keep it just to torment her.
Why, suddenly, do I feel like Grandpa in a Joy Watson book? This is disturbing. I’m not completely useless though. I know the current trend with teenagers wearing socks with slides is just ridiculous (and no I never wore socks with my jandals). They will, I’m sure, look back in embarrassment just as I silently cringe at old photos of me rocking the Canterbury shorts and a singlet with, yes, a bit of a mullet. Hey, it was trendy at the time. I think.
When I was a teenager I was pretty much oblivious to fashion though I did know that Nomads were cooler to wear to school than Treks.
And I balked when Dad made a rare foray into the clothes buying department one time when I needed a new pair of jeans. He found some that had, stitched into the bum, a picture of a cowboy swinging a lasso above his head astride a horse. Even I knew that wasn’t right.
The reality is fashion often comes at a cost, which the eldest is rapidly realizing now she’s earning her own money. We were in Whangamata for a surf carnival and with her first pay cheque burning a hole in her pocket, we went to a surf shop so she could buy some clothes. After pawing through the racks she came up to me in mild disgust, with about three surf labelled singlets in her hands.
“Dad, these are such a rip off. They’re $49 each. And it’s for singlets; it’s not like they’ve had to use a lot of material.”
I agreed and we wandered out empty handed but as we strolled down the street it was apparent she wasn’t finished.
“But look, they’re really cool singlets so if you felt like buying me one, that’s ok.”