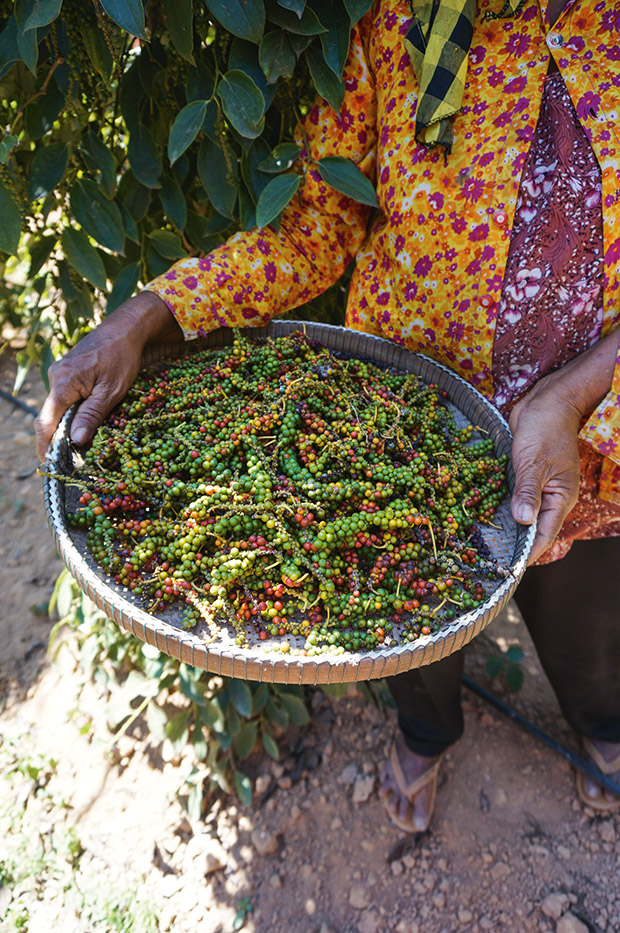 The pepper growing here in grape-like bunches is hand-harvested and considered exceptional by chefs worldwide.

New Zealanders Jon Lambert and Freya Horder are doing what they can to protect Cambodian pepper farms against European encroachment.

As the Kampot sun begins its slow ascent, the salt workers, mostly women, splash out onto the flats, covered head to toe against the sun’s growing strength. In fluid, careful strokes, they rake up the evaporating salt, drawing it into snow-like mounds.

More than 4500 hectares of land in Kampot and its neighbouring district of Kep in southern Cambodia are used to produce about 80,000 tonnes of sea salt a year. That’s in a dry year. Too much rain – as has fallen this year – will see that cut to about a tenth. 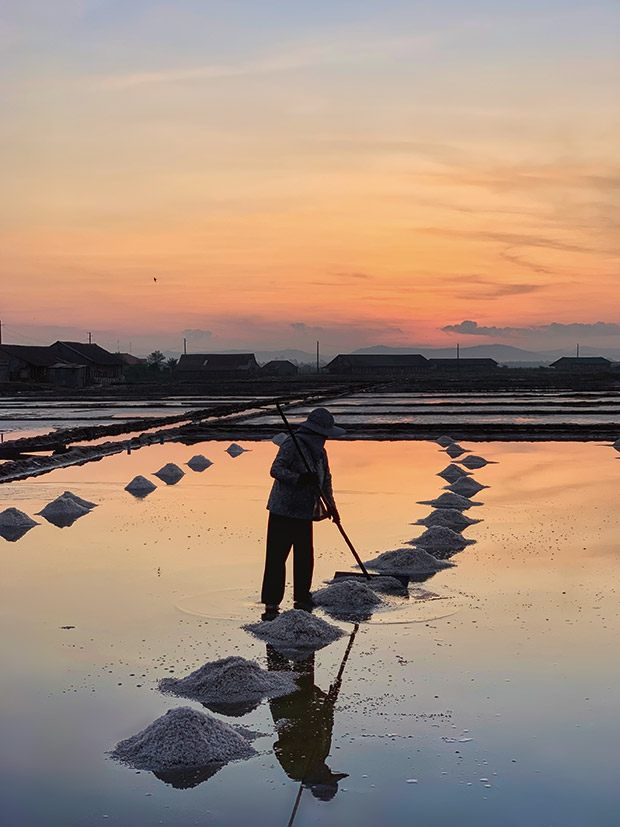 Kampot and its neighbouring region, Kep, have retained much of their French colonial charm, despite the ravages of the Khmer Rouge. The salt — including the highly desirable fleur de sel — is produced via the age-old evaporation method, swept up and trucked off to the cleaned.

The rectangular evaporation pans transect the Kampot plains stretching as far as the eye can see. Water is pumped from the nearby Gulf of Thailand and filtered through a series of canals and pools before reaching the shallow pans.

The salty water evaporates in the sun, leaving salt crystals, including the desirable flower-like crystals of the fleur de sel. The fleur de sel forms a fragile crust on the water’s surface and is skimmed off first. Then the regular pyramid-shaped salt crystals are raked into piles and shoveled into bamboo baskets. These are carried on poles spanning the shoulders and dumped in sheds ready for collection then cleaning. 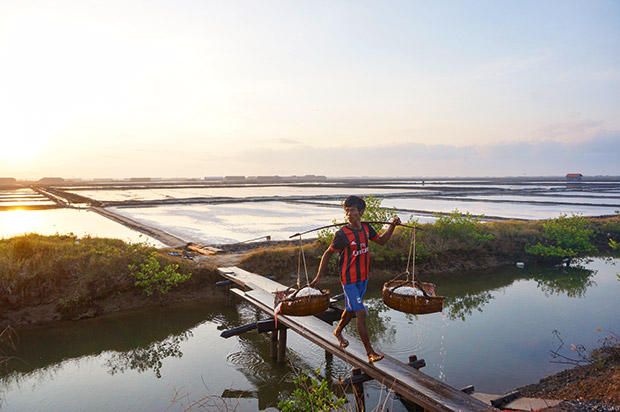 It’s peaceful out on the salt flats. Well, certainly for the tourists who tuk-tuk by to holiday-snap this ancient process. For the workers, however, it’s strenuous manual labour.

Each basket of wet salt weighs about 25 kilogrammes and the days are long, beginning about 5am, with a break for lunch, then back into it until sundown. And there’s no “off” season; they switch to rice cultivation during the wet season.

By happy condiment coincidence, a few kilometres away from these salt pans, grows what’s widely acknowledged as the world’s finest pepper. Kampot and Kep are world-famous for fragrant, spicy, lingering black, red, white or green pepper. 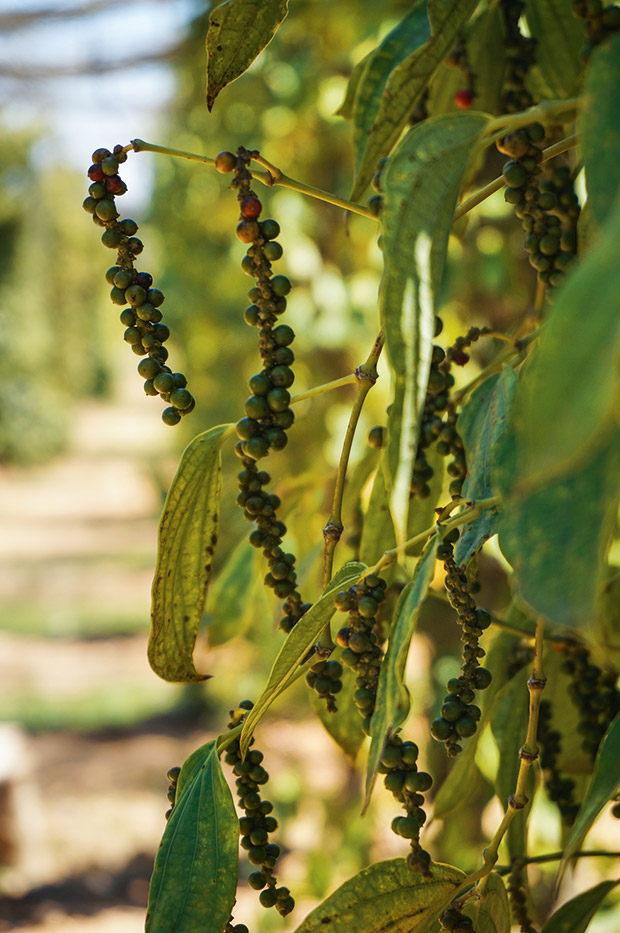 All the colours come from the same plants, which are carefully cultivated vines twisted around wood standards and thought to have been grown in Cambodia from as early as the 13th century. The vine’s berries – peppercorns – are picked and pickled, or boiled and dried for a few days in the sun or a greenhouse set to 52 degrees Celsius.

More stories you might like:
What is a Booktown? This South Wairarapa town is bouncing back one bookshop at a time

Although Kampot pepper has been prized for more than a century, and particularly so during the years of the French protectorate, the Khmer Rouge did not value it. Through the latter part of the 20th century, the regime destroyed the pepper farms through neglect and an ideological push to plant rice. Now, 20 years after the Khmer Rouge left the region, Kampot pepper is once again the favourite pepper of many of Europe’s top chefs. While this growing demand is good, smaller Cambodian pepper growers are finding themselves competing against large European corporate entities steadily taking over farms.

New Zealanders Jon Lambert and Freya Horder first visited Kampot in 2014 as tourists. Instead of taking the usual tourist route to slick corporate-owned farms, Jon and Freya asked a tuk-tuk driver (who has since become a firm friend) to take them to visit a Cambodian-owned pepper farm. There they met Soly Chan, the English-speaking, business-minded representative of her family’s business, Ngov Heng of Kampot.

Jon and Freya are no longer married but still have their business, Pepper and Pearls (recently rebranded from Jonny Ocean Trading). They decided on the spur of the moment to import pepper to New Zealand. “We wanted to work with a Cambodian-owned business,” says Jon, who travels to Cambodia as often as he can and is now building an eco-village in Kampot. 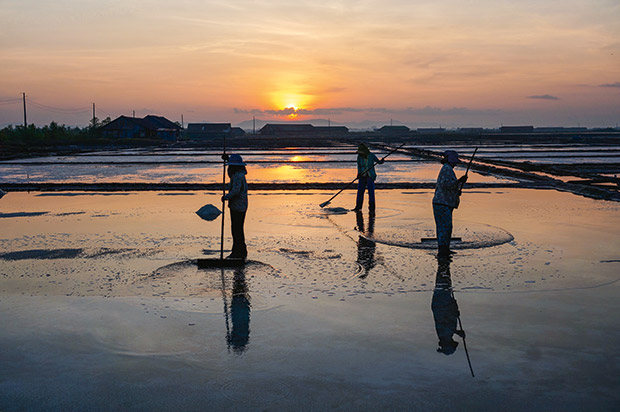 The water-laden salt is carried in baskets holding up to 25 kilogrammes and stored in sheds awaiting transport.

“We didn’t see the point in giving money to an international business. It’s a developing country and if we can help by buying local and working with smaller businesses, we will. It’s great to be working with Soly and seeing her business expand.”

The Chan pepper farm at Phnom Vol (“phnom” means “mountain”), within sight of the Vietnamese border, is on the well-draining, yellow/red soil that’s excellent for growing this particular spice.

Soly’s father, Sitha, saw the opportunity to get into pepper and bought the farm in 1999, just after the Khmer Rouge pulled out. He has nursed it back into production. Initially, Phnom Vol had 100 pepper trees, then he planted another 1000 and harvested his first pepper crop in 2002. Now the 10-hectare farm, of 10,000 pepper vines, produces up to three tonnes of pepper each year. “We were one of the first companies to get back into pepper farming on a commercial scale,” says Sitha. “We did a lot of planting, making mounds to support the vines, and mixing a compost made from bat guano and various Cambodian herbs. Our pest control comes from a bitter weed, which we ferment and spray on the vines. It’s all organic.”

To be officially Kampot pepper – for the product to boast the “Kampot Pepper” sticker and enjoy the protection of its Geographical Indication (GI) – the pepper must be grown organically.

“Kampot pepper stands out because of its taste; even the green pepper is spicier than other pepper,” Soly says. 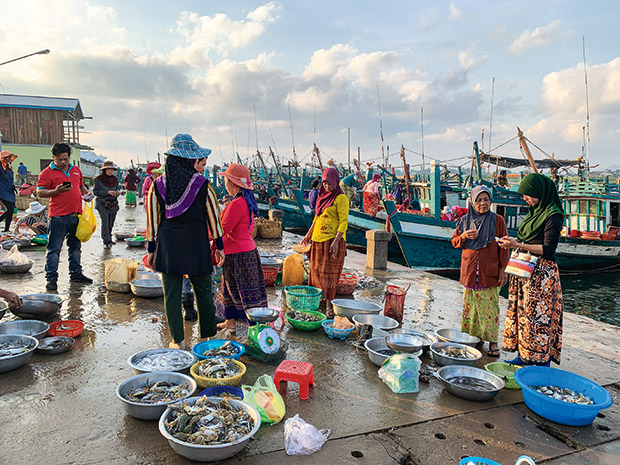 Local women snap up the night’s catch at the Kampot fish market. They need to be up early; the seafood can be gone by 7:30am.

Her teeth crunch a corn picked from a cluster of peppercorns resembling a bunch of miniature grapes. “Other peppers might be spicy, but they fade. Kampot pepper gets spicier inside your mouth – the flavour improves, growing stronger and stronger.”

What’s also growing is New Zealanders’ taste for the exotic, and willingness to pay for quality. About 300 kilogrammes of Sitha and Soly’s pepper finds its way to New Zealand via Pepper and Pearls each year. The Chans are delighted and proud that New Zealanders enjoy their pepper and the Kampot salt their company also sells.

They are thankful to Freya and Jon for supporting their business. “New Zealanders are intrigued as soon as you say ‘Cambodia’. So, I often end up having big chats with customers about Cambodia and its history,” says Freya. 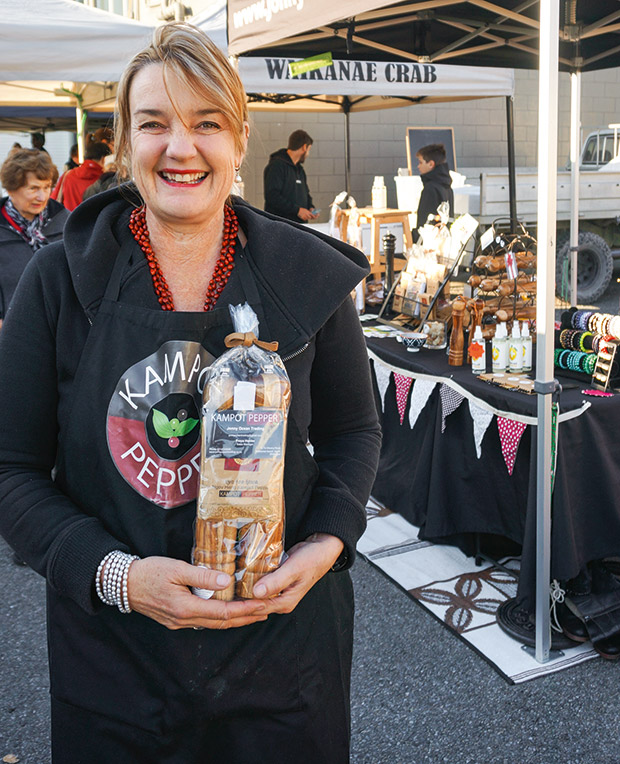 Freya is usually the one behind the Pepper and Pearls stand in farmers’ markets. She also fulfils the growing number of online orders.

“When you tell people about Kampot pepper they say, ‘Pepper is just pepper’, but people’s reactions are amazing once they taste it. They walk away from the stall with their mouths still tingling.” 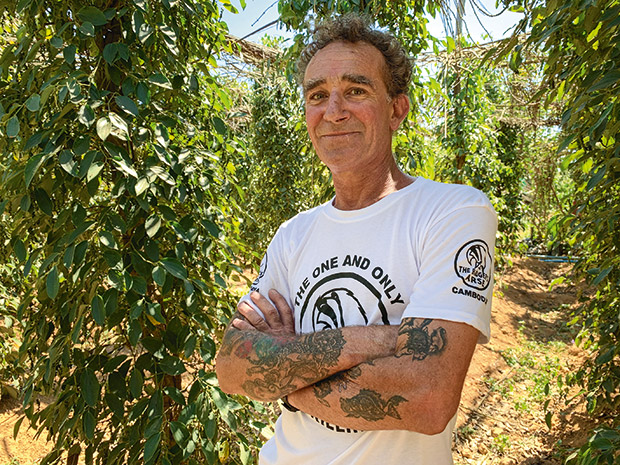 Touring Kampot’s pepper farms has become popular in the region, but Jon (pictured here) and Freya encourage visitors to opt for properties owned by Cambodians rather than European corporates.

“It’s the taste and the longevity of the taste,” says Jon. “It’s a bit like a wine – there are a lot of subtle flavours that go on under the spicy, peppery flavour that make it such a great complement to any food. Kampot pepper is special, and we love introducing it to New Zealanders.” pepperandpearlsnz.com

Peppercorns all come from the same bunch, so the difference is down to ripeness and treatment, as pepper farmer Soly Chan explains. 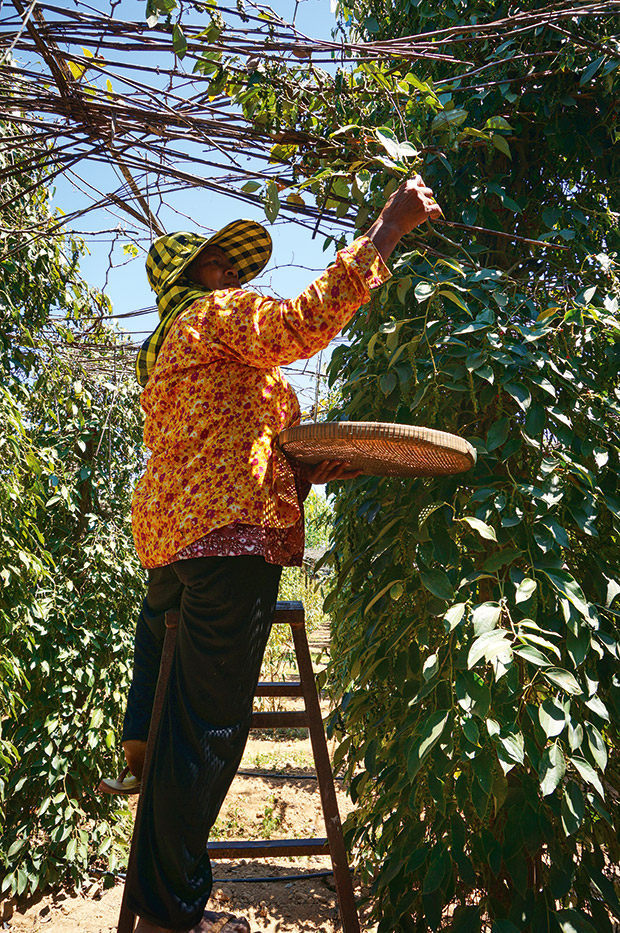 Pepper grows and is harvested on the Chan family pepper farm, which its owner, Sitha Chan, bought and resurrected after destruction by the Khmer Rouge. During harvest, about 30 kilogrammes of berries are picked on the farm each day, then delivered to the Chans’ factory to be boiled and dried.

“The fresh green peppercorns will either be pickled and sold as green peppercorns. Or they will be boiled and dried in the sun or our greenhouse until they’re black and very dry. Any peppercorns that aren’t entirely black are separated by hand, with tweezers, and only the first-rate ones are vacuum-packed for sale.

“Red pepper is my favourite. I use a lot of it. I like it chopped — not ground — on grilled meat. I like white pepper in soup, as it’s spicier than black or red and has more flavour. Black is good in most things and good on salads.”

Getting there: The nearest airport to Kampot is the Cambodian capital, Phnom Penh (itself very much worth spending a few days in). Transfer to Kampot by train or (more comfortably) one of the many minibuses, or (most comfortably) a private driver, which costs nearly $80 one way.

At the moment it’s a dusty three- to -four-hour drive over highways undergoing profound and prolonged road works. But when completed, the trip should be only a couple of hours.

Stay: Nowhere near as overdeveloped as nearby Sihanoukville, Kampot is nevertheless well set up for tourists. It retains much of its colonial architecture — at a picturesque stage of dilapidation — with plenty of places to stay and eat well. Gecko Village is a low-key, mid-range resort with bungalows positioned around the pool.

It’s a bit out of town and down a challenging track, but worth it for sundowners right on the river, watching fishing boats putt-putt out for their night’s fishing. For something slightly higher-end, and in the centre of the laidback town, try Rikitikitavi, rikitikitavi-kampot.com

Eating: If you aren’t staying at Rikitikitavi, still pop up to its bar for a drink or dinner. Veronica’s Kitchen, a bit further upriver, serves delicious Khmer and European meals. Oh Neil’s Irish Bar & Eatery attracts a fascinating collection of travelers
and expats.

Spending: One of the best things about traveling in Cambodia is using US dollars. The conversion rate is so much easier than the Cambodian riel, currently about 2640 riel to $NZ1. While there’s a cultural push on to save the riel, spending dollars is just much more convenient. Many places take credit cards but be prepared to pay in cash — ATMs are easily found and distribute US dollars.

Go and see: Visit the fish market, where the fishermen sell their night’s labours to the local (usually pyjama-clad, for comfort) women. But get up early as the market is usually done and dusted by about 7.30am. Take a tuk-tuk down to Kep Beach (about $24 for the day) to visit the ghostly, ruined mansions deserted by Cambodia’s ruling classes when the Khmer Rouge swept in.

Kep Beach was very much Cambodia’s Riviera. Also, take a twilight tour on one of the many riverboats (about $8, including a beer or two) to see the fireflies. Even if the fireflies fail to fire, it’s still a nice cruise. Not all boats serve alcohol and some have very loud music, so choose carefully.