Laser technology might be the next big driver of economic growth in New Zealand according to an Auckland University scientist.

Associate Professor Cather Simpson was the big winner at the KiwiNet awards on Thursday Night snapping up the BNZ Supreme Award for her photonic laser technology. The laser technology could potentially raise New Zealand’s GDP by .2% she says. 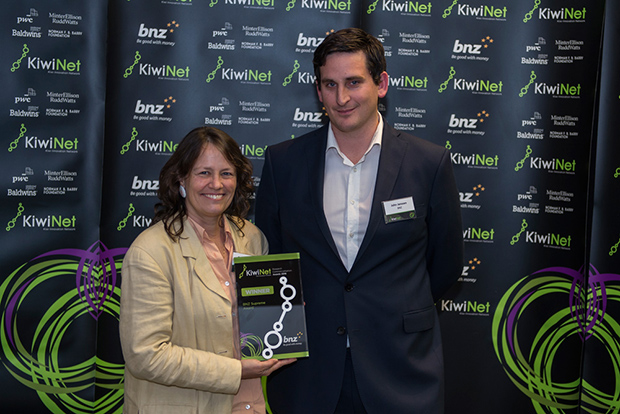 A who’s who of New Zealand’s scientific community gathered at the Viaduct Events Centre for the KiwiNet Awards, which recognise commercialisation of research in New Zealand.

One of the commercial applications of Cather’s research is separating the sperm of dairy cows to allow sex selection, reducing the number of bobby calves born.

“We listen to what industry says they need and see if we can find a way to solve their challenges,” says Cather.

“We met with a dairy industry investor who challenged us with five problems currently facing the dairy industry and said, ‘Can you help with any?’ We chose sperm sorting to allow farmers to control the most important genetic factor in their herd, whether they have male or female offspring.”

“What [Cather’s] able to do is walk that ‘pracademic’ line between research and industry and understand both and contribute to both.”

Cather’s commercial lab the Photon Factory was founded in 2010 and has received $2 million of commercial contracts. She has also formed two new startup firms; Orbis Diagnostics Ltd and Engender Technologies Ltd, which has attracted approximately $5 million of investment capital.

More stories you might like:
Baby donkey troubles: A Mamaku donkey rescuer explains the sad reality for many donkeys in New Zealand

The technology also increases the metabolisable energy of crops consumed by cattle and reduces the methane and nitrogen output, in turn, lowering the amount of greenhouse gases emitted during farming.

“While we’ve developed this technology for the New Zealand pastoral system but we’ve realised the potential is to increase the photosynthetic capacity for all human food crops. We’re going to have to increase food production by 50 per cent by 2050 as we reach nine billion people [on earth],” says Nick.
The Kiwi Innovation Network (KiwiNet) www.kiwinet.org.nz is a consortium of 16 universities, Crown Research Institutes and a Crown Entity established to boost commercial outcomes from publicly funded research. Principal support is also provided by the Ministry of Business, Innovation & Employment (MBIE).