Lucy Corry hits the jackpot with the king of herbs — and adds it to vinegar, butter and just about everything she eats.

A couple of weeks ago I boarded a domestic flight, full of trepidation. It wasn’t the weather (when you live in Wellington, a rocky ride home is par for the course), or the company (I was sitting next to a very polite chap who sat down, nodded hello and promptly went to sleep for the rest of the journey).

It was more that I was clutching a large repurposed plastic bag of pungent, freshly picked tarragon from my sister’s garden and I was afraid that someone was going to tell me it was contraband. I was also quite worried that the jam jar of precious tarragon vinegar she’d given me was going to start leaking in my handbag. I wouldn’t have minded the smell, but the loss would have been too hard to bear.

Tarragon (Artemisia dracunculus) is the sort of herb that cooks and food lovers sigh over, thanks to its intense, slightly bittersweet aniseed flavour. In France, it’s often referred to as ‘the king of herbs’. It’s magic with fish, a delight with chicken and even — thanks to its starring role in the classic French bearnaise sauce — glorious with steak. American gourmand James Beard reportedly once said that ‘I believe that if ever I had to practice cannibalism, I might manage if there were enough tarragon around’.

But not all tarragons are created equal. French Tarragon is considered superior; it has a better flavour than the more commonly found Russian variety. Neither should be confused with Mexican tarragon, which is actually a member of the marigold family and has a rather different flavour altogether.

Cruelly, French tarragon only grows via propagation or division. This is why I was so desperately clutching the bag of it from my sister, because she included two well-rooted pieces for me to plant in my garden.

If you see tarragon for sale in a New Zealand garden shop, it’s most likely to be the Russian variety, which doesn’t have as strong or pleasant of a flavour but is perversely easier to grow. If you feel tempted to use it instead, bear in mind the advice of Elizabeth David, who briskly dismisses ‘common’ Russian tarragon for having ‘a rank taste and no scent at all’. 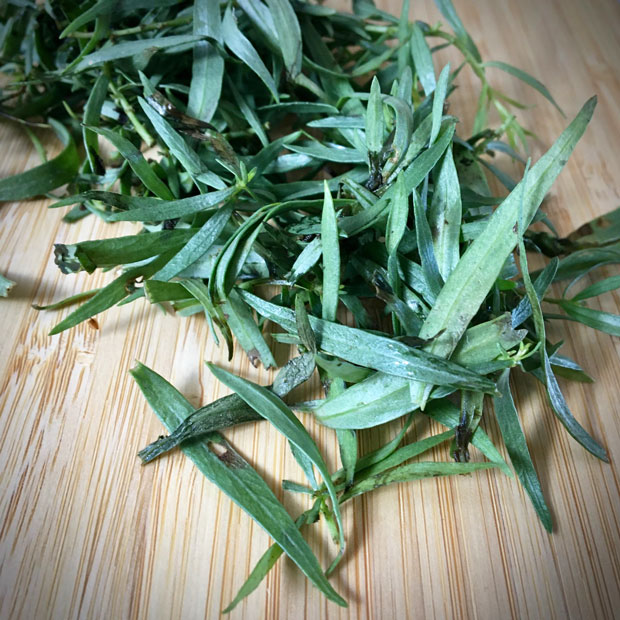 Now I have all this fragrant French tarragon at my disposal, it’s tempting to add it to everything we eat. However, I think it’s probably better to play a long game, lest my family take fright at ‘Tarragon Surprise’ for dinner every night and vow never to eat it again.

Far better, I think, to store some for the long autumn and winter ahead. While I’m hoping to conduct experiments with making tarragon liqueur, at the moment I’m making lots of tarragon vinegar and tarragon butter. If you’re in a similarly lucky position, here’s how to make them at home.

HOW TO MAKE TARRAGON VINEGAR

While tarragon vinegar is a key ingredient in bearnaise sauce, it’s also wonderful used in any kind of vinaigrette to perk up just about any salad or vegetables. Or you could use it in mayonnaise for a potato salad, or over perfectly hard-boiled eggs. Even just having a jar of it in the pantry that I can open and sniff occasionally makes me feel calmer about life in general. Making it couldn’t be easier. Take a large sterilised jar and stuff with several handfuls of washed, dried tarragon. Cover with white wine vinegar, add a lid and leave in a cool place for two weeks.

Taste the vinegar to assess its tarragon-ness. If it’s at the level you like, strain out the tarragon and store the vinegar for up to six months. If you think it needs a bit more tarragon flavour, leave it for another week and try again.

HOW TO MAKE TARRAGON BUTTER

If you A) have a lot of tarragon and B) subscribe to the theory that everything tastes better with butter, this will be right up your street.

Simply beat together 150g softened butter with ½ cup loosely packed tarragon leaves, the finely grated zest of 1 lemon and a few grinds of black pepper. (To make this process even easier, throw everything in a food processor and whiz until smooth.) Slather this butter over a chicken before roasting (slip it between the flesh and skin), or on top of quickly baked fish, or in a baked potato.

If you’re not planning to use it in a day or so, shape the butter into a log and wrap securely in baking paper. Chill in the fridge for up to a week, or wrap into foil and freeze for up to three months. Slice discs of butter from the log when required.