Lynda Hallinan’s Blog: For whom the cowbell tolls Lynda Hallinan’s guide to what – and what not – to adopt when you live in the wops.

It all began with a ewe called Harold who thought she was a cow. Harold was my now 18-year-old nephew Sam’s first pet lamb and he named her after the helicopter in Thomas the Tank Engine. Harold, we all joked, was mutton dressed as ram.

After Harold’s Pet Day outing, she never saw another sheep. She grew old and doddery with Dad’s fattening drystock cattle until I saved her from being made into sausages by offering her a forever home at Foggydale Farm.

Harold, the first in a long line of waifs and strays, was followed by Rambo, my mother-in-law’s retired snaggle-toothed ram; a pair of kunekune piglets named Apple Sauce and Plum Chutney; Peppa, an orphaned (and as it turned out, congenitally blind) Captain Cooker pig; Wendyl Nissen’s hand-reared chooks, Kim and Khloe Kardashi-hen; and more recently, Rusty and Dusty, a couple of rather busty bovine refugees from the city.

I am, it has to be said, a sucker for an animal sob story. I grew up on a farm, surrounded by pigs, chooks, cows and sheep, and studies by behavioural psychologists suggest that being raised with animals makes you more likely to have a soft spot for pets later in life. (My husband, who only had a bitzer in the ‘burbs, certainly doesn’t share my adoption affliction.) 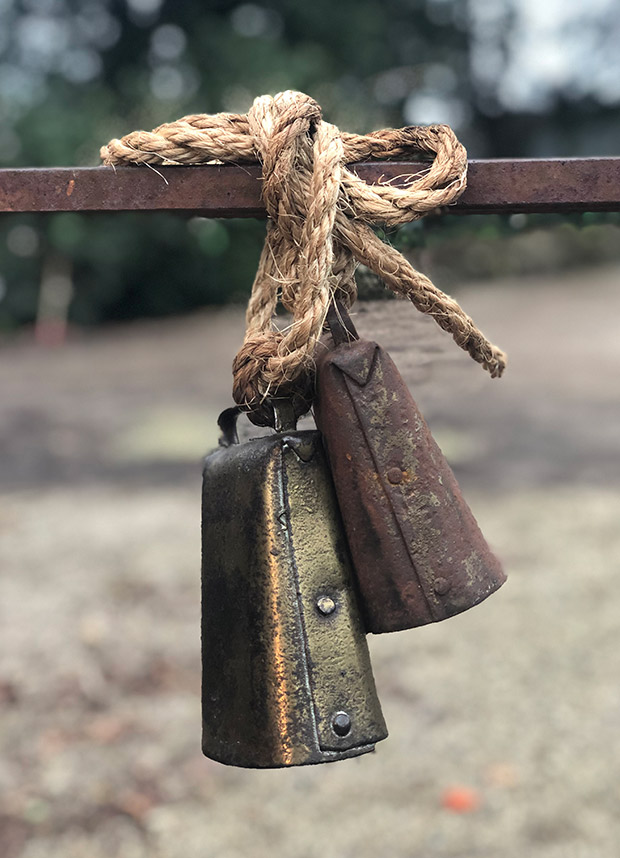 Most country kids can’t decipher between pets and pests. Our neighbours nursed a magpie fledgling to maturity, only to be shat upon in aerial attacks forever after, while my sister and I once rescued a baby possum from its dead mother’s pouch on a possum shooting expedition.

We fed that hapless, hairless joey colostrum from an eye dropper and tucked its naked bottom into tissue paper nappies held together with Band-Aids. It’s probably just as well it only lived for a few days in our hot water cupboard, as I suspect no one was in it for the long haul.

We had better luck, in the short term at least, with a pair of wild rabbits whose burrow was stoved in by our dairy herd. We loved those bonny bunnies, housed in a homemade hutch on the lawn, and brought them into the house to play, where they ultimately met an untimely end under the bed with our cat, Biggles.

(Last month my mate Tracey reenacted this exact scenario with a wild rescue rabbit called Squishy. While she was out feeding the calves, her kids let Squishy out of its hutch, at which point the family cat Cruze promptly devoured all of Squishy’s squishy bits.)

Thinking of adding to your own lifestyle block brood? I have compiled the following list of helpful pointers for potential parents.

Rescue battery hens, especially brown shavers, will repay your kindness many times over with eggs. Such hens often come with a few post-incarceration behavioural quirks, but that’s nothing compared to the mentally unhinged cats I’ve collected over the years from the SPCA.

Heritage breed chooks are hit-and-miss layers but boast remarkable longevity. In 2010, I adopted Kim and Khloe, a silver- and gold-laced wyandotte, from Wendyl Nissen. Wendyl had hatched them out in her central city garden during her Green Goddess phase, only to have them terrorised by the neighbour’s dogs.

They moved to the safety of the sticks with me and, ten years on, they’ve definitely earned their keep (in Chook Chow and kitchen scraps) as photogenic hens for magazine shoots and social media posts.

Thinking of adopting a piglet? Think twice. When my friend Jodi bought her first lifestyle block last year, she also bought three kunekune piglets as Christmas presents for their kids.

“Don’t do it!” I warned her. “Too late,” she replied before the ink was even dry on their sale and purchase agreement. Six months and several escapes later, Jodi’s much-loved kunekunes have finally grown too fat to squeeze under the fence in their bid for freedom. I, too, once had a soft spot for a pair of spotty wee piglets with dreadlock tassels. I’ve told this story before, but I went to buy a hedge at a local tree nursery and came home with two pint-sized porkers, one black and one blonde. Plum Chutney and Apple Sauce were sold to me as miniature kunekunes and they may indeed have stayed that way, had I not liberated them in our orchard. In return for keeping the grass down, they were allowed to hoover up any black-spotted and brown-rotted windfall fruit, which they did so religiously that both ended up the size of whiskey barrels with triple-digit BMIs.

More stories you might like:
A beginner's guide to hoof trimming: How to keep your cattle, sheep, and goats limp-free

Here’s what I have learned of keeping kunekunes: an electric fence is the only thing that will keep them at home, and the only thing they are better at than getting out, is getting into any shed where feed may be stored. Apple Sauce in particular proved such a notorious Houdini that, three years after her passing, whenever a pig shows up where it shouldn’t on our neighbourhood Facebook noticeboard, people still tag me in.

It’s almost Ag Day season again. Orphaned lambs are utterly adorable but will put your kids off their (roast) dinners if they make the connection. Bottle-fed ewe lambs make lovely lifelong pets but ram lambs will take out your kneecaps once fully grown. Don’t adopt a sheep unless you can commit to shearing or at least crutching to prevent flystrike.

Whenever I begged my dairy farming parents for a pony, I was flatly rebuffed with the fact that, apparently, a horse eats as much grass as seven cows.

Horses also seem to outlive their owners’ desire to keep owning them; in my rural community, old horses are always looking for new homes.

“A donkey or a horse on its own is the saddest thing,” according to NZ Lifestyle Block editor Nadene Hall. “Donkeys don’t have waterproof coats so they need good shelter from rain and wind. Both have hooves that need regular trimming – by an expert farrier, at a cost every 6-8 weeks – and they need careful pasture management.”

When our local postie (another soft touch) showed up with an unwanted kid goat in a courier box, the kids begged me to keep it. But Nadene, who once owned 15 goats, sounded a note of caution.

“Goats are super smart, complex creatures and they are especially social. One animal on its own is going to pine, and go looking for trouble – and they will find it, and you probably won’t like it! You need to understand their unique needs,” she warns.

One of those unique needs is the insatiable desire to scoff every single plant in your garden. Goats and gardeners are never compatible as companions.

As any dairy farmer’s child knows, pet calves make marvellous mates. Some of my happiest childhood memories are of raising my Calf Club Day pals, playing hide ‘n’ seek around the pump shed.

Just before the lockdown, I offered a forever home to two old biddies facing eviction from the only postcode they’d ever known. Rusty and Dusty were 12-year-old Westie girls who had been raised as pet calves on the city fringe before their paddock was carved up for development. Before I could adopt them, they had to be registered with NAIT, tested for TB and coaxed on to a cattle truck for the first time. 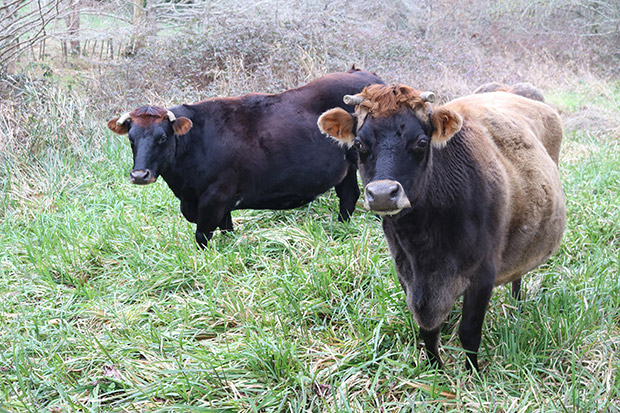 I imagined the three of us in a picture of pastoral bliss, just lounging together in the long grass, chewing the fat – and the rye – as I stroked their necks and they gazed back at me with loving gratitude for saving them from the slaughterhouse. To welcome them to our family, I even bought a bag of Supa Grain Plus and a couple of antique cowbells – one rusty, one dusty – to hang around their necks.

For whom the bell tolls? Not for Rusty and Dusty, that’s for sure. I still can’t get within cooee of those wily old girls, but not for want of trying. 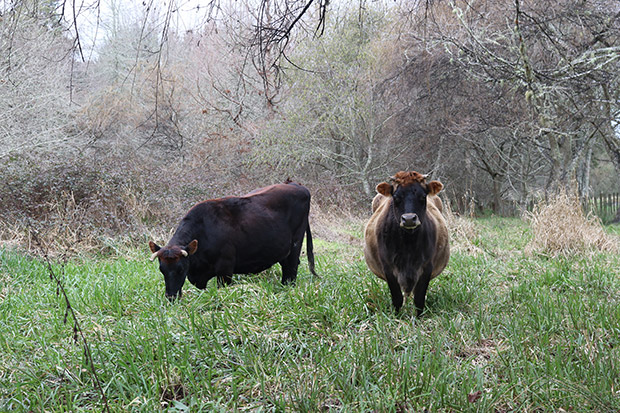 “When you love something,” said the American fantasy author Patrick Rothfuss, “make sure it loves you back, or you’ll bring about no end of trouble chasing it.”