Every day, I pack my kids off to school with an apple in their lunchboxes. More often than not, it’s the same apple, a frontline fruit sent into duty so the teachers don’t frown at the Nutella sandwiches, store-bought biscuits, fruit jellies and mini packets of pretzels that accompany it. (I try not to take it personally that my children are suspicious of any home-baking baked in their actual home.)

Over the course of the week, those apples grow gradually more battle-weary and bruised, until Friday afternoon when all pretence of healthy eating is dispensed with and they’re biffed into the chook bucket, returning to our kitchen as free-range eggs, which both kids eat without complaint.

My youngest son Lachie prefers red-skinned apples such as ‘Liberty’, ‘Gala’ and ‘Ruby Crunch’, whereas his older brother has exacting tastes. He’d been blagging a ‘Granny Smith’ off his classmate Cameron for months before Cameron’s mum Rachel took me aside to ask if I was aware that “Lucas only likes green apples”. 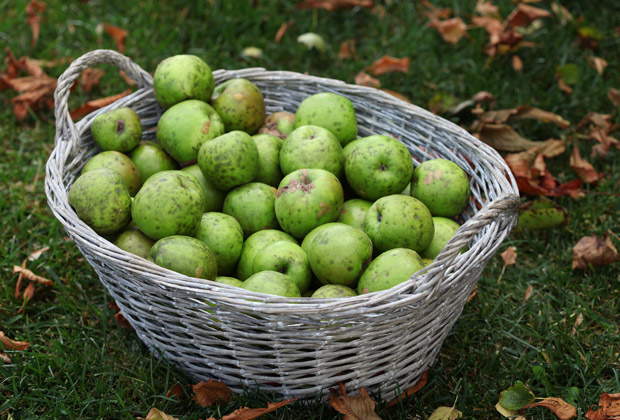 This was news to me. We have five ‘Granny Smith’ apple trees in our organic orchard and Lucas has never shown any interest in eating any of their fruit. (Mind you, by the time this is published we may only have four grannies left, as our kunekune pig, Plum Chutney, has been using the middle tree in the row as a scratching post. The last fruit tree she rubbed up the wrong way was a ‘Papple’ nashi; she eventually pushed it over and munched her way down from the tip to the bottom of the trunk until she got to the graft and gave up.)

Going into the Level Four lockdown last autumn, our ‘Granny Smith’ apple trees were laden with fruit. They were also riddled with codling moth larvae and blighted with black spot, as I take a laissez-faire approach to orchard management, preferring to simply cut out the bad bits before eating my crop.

No one could accuse me of micro-managing my fruit trees. I plant them, mulch them, stake them and that’s it. No fertiliser. No irrigation. No annual pruning. This “treat ’em mean, keep ’em keen” strategy forces the trees to dig deep in search of water, enhancing their drought resilience and hardiness. Plus feeding and pruning serves only to encourage heaps of new growth, most of which then needs hacking off.

By all means, prune your peaches and nectarines (as these crop on new wood) but apples, pears and most plums only need a haircut for harvest convenience. If they grow taller than your tallest ladder, then lop their heads back down to size. If your homegrown apple crop is a bit spotty, an all-in-one apple peeler, corer and spiraliser works wonders to increase your children’s fruit consumption. Best $25 I ever spent on a kitchen gadget, says Lynda.

Because my kids were home all day every day during lockdown, with Mum at their beck and call to whiz homegrown apples through our apple spiraliser (one of the few nifty kitchen gadgets everyone should own), they ate dozens of apples, and, like a modern-day Johnny Appleseed, Lucas decided to save four pips from one of those apples to sow.

Johnny Appleseed, real name John Chapman, was an orchardist and barefoot missionary (1774-1845) who roamed the American frontier, scattering apple seeds along the roadsides as he spread God’s word and the fruit of Adam and Eve’s downfall in equal measure. According to A History of Grafting published in the Horticultural Reviews journal, Johnny Appleseed chose to sow apple seeds rather than grafting trees because he “felt that cutting into a tree was cruel, despite the fact that grafting of apples was widely practiced at that time”.

But in a radio interview promoting his book The Botany of Desire, author Michael Pollan suggested a novel alternative theory about why, despite his eccentricity, Johnny Appleseed was welcomed wherever he wandered.

Because apple trees don’t come true from seed, Pollan reckoned that most of the seedling trees he sowed would have produced fruit that was good for nothing but making cider: “Johnny Appleseed was bringing the gift of alcohol to the frontier. That’s why he was so popular. That’s why he was welcome in every cabin in Ohio. He was the American Dionysus. He was the guy bringing the booze.” There’s no denying the intoxicating pleasure to be gained by raising fruit trees from seed, and not just for the budget-conscious. Rather than buying commercially grafted bareroot trees in winter, you can save fifty dollars a pop by sowing the almond-like stones of ripe peaches, nectarines, apricots and plums, or apple, pear and citrus pips.

Stonefruit in particular self-seed readily and reliably, but you can speed things up on the germination front by gently cracking the stones open to liberate the wee kernel safely tucked inside.

Lucas sandwiched his apple seeds between damp paper towels laid flat inside a resealable plastic bag, which we then popped into the vegetable crisper in our fridge (a germination tactic known as stratification). Six months later, three seeds had sprouted and he carefully potted them up together in a small plastic tub of seed-raising mix on our kitchen windowsill.

Of the three seedling apple trees that came up, two immediately went down the slippery gob of a baby snail that had hitchhiked indoors hidden under the rim of the plastic pot. Proving that the apple doesn’t fall far from the tree, Lucas and I reacted simultaneously to their sudden disappearance.

And we were both right.