Can’t see the woods for the trees? Here’s how to find meditative pleasure in giving midwinter hugs to towering trunks.

Dame Judi Dench is a jolly good stick. The 86-year-old Oscar-winning actor met her 76-year-old boyfriend at the opening of his Surrey squirrel enclosure, and as well as being an adventurous environmentalist, she’s a dedicated dendrophile.

In her BBC documentary My Passion for Trees, Dame Judi gives an old oak an affectionate caress as she wanders through her woodland garden. “Ever since I was a little girl, I’ve adored trees,” she says. “I think of my trees as part of my extended family.”

I, meanwhile, think of my family as trees. My husband is a balding swamp cypress, Taxodium distichum, strong and tall, knobbly toed, bristly of bark and adept in a muddy ditch (he’s a certified drainlayer).

My youngest son Lachie is a sapling silver birch or perhaps a juvenile rangiora, Brachyglottis repanda, his hair as white as the undersides of our native toilet-paper plant’s furry leaves. Like the bushman’s friend, Lachie’s also dead easy to spot in a dank forest. 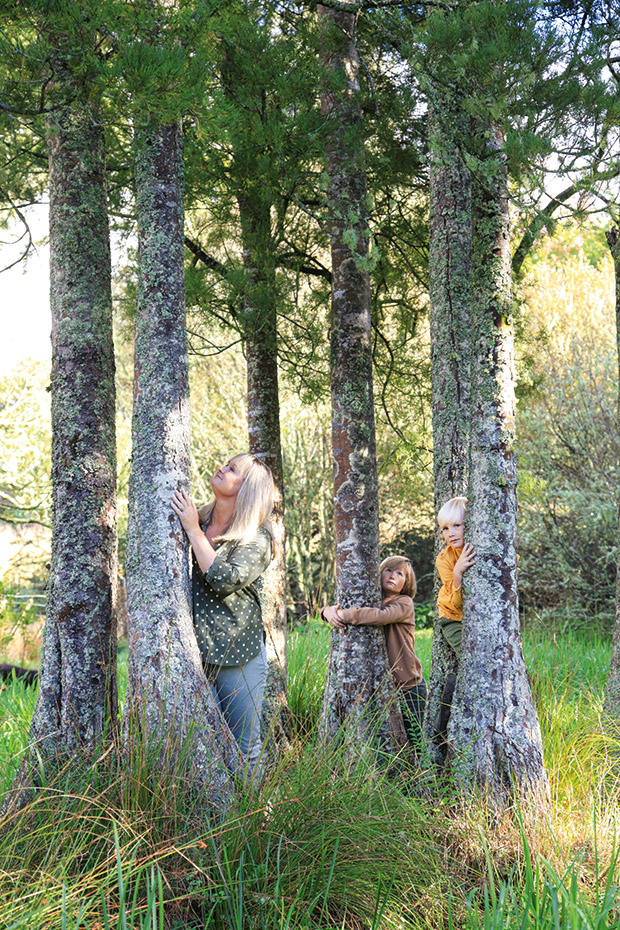 As for my eldest son Lucas? He’d be a fastigiate irish yew: slow off the mark, cautious to corner, the most ponderous petrol-head in his primary school’s motocross team. Someone has to come last, he shrugs, so why not him?

When Lucas wanted to ride in an inter-schools challenge in Rotorua, we made a weekend of it, ticking off a few tourist sights. We went up the gondola, down the luge, soaked in the Polynesian Spa and took a stroll along the Redwoods Treewalk in the Whakarewarewa Forest.

I’ve walked this walk before — in 2017 — when the forest fair thronged with international tourists. It was a warm summer’s evening on terrain bound for nowhere; we stood in a queue on the forest floor for almost 90 minutes, waiting to ascend into the mighty stand of Sequoia sempervirens.

Before the pandemic, more than half a million visitors trip-trapped along these swing bridges every year. But when we went, on a rainy Sunday afternoon this past autumn, we had the quiet company of those centenarian Californians (the redwoods were planted in 1901) all to ourselves.

Famed for their longevity and majesty, redwoods are actually big softies at heart. Press your palm against their famously fire-retardant, fibrous, cinnamon-brown bark, and it yields to the touch, losing a little of itself with every gentle pat. 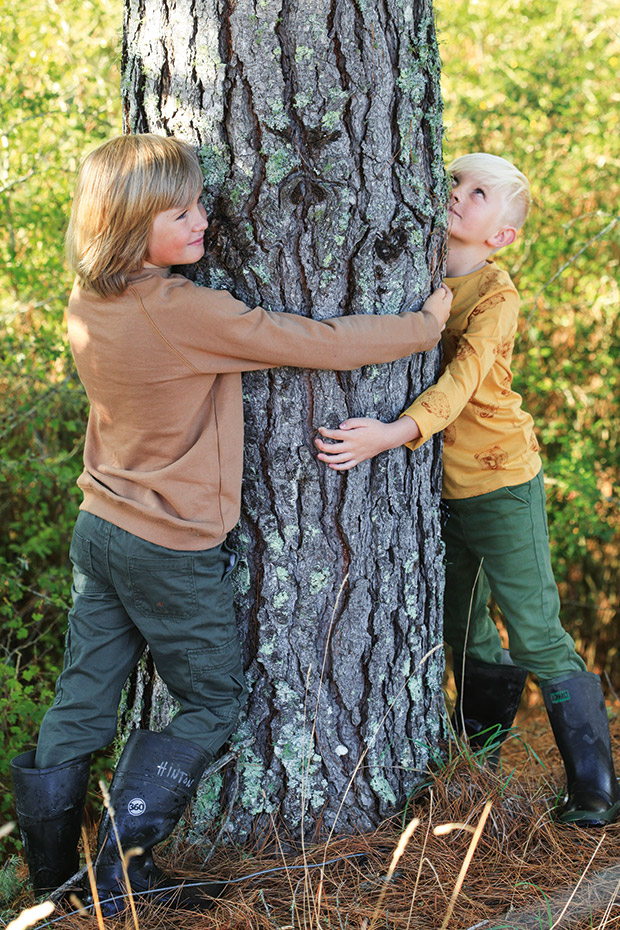 Consequently, every trunk along the Redwoods Treewalk now sports a small wooden sign. “Please do not touch the trees,” the signs say. But you can see that everybody does, for the urge to reach out and connect with these forest giants is innate. We simply can’t keep our hands to ourselves.

In 1973, psychoanalyst Erich Fromm coined the term “biophilia” to describe this “passionate love of life and of all that is alive”. In 1984, American biologist Edward O. Wilson and social ecologist Stephen R. Kellert went a step further, arguing in their book The Biophilia Hypothesis that we are hardwired to seek an affinity with nature.

In the past, our very survival depended on interspecies friendships — we needed plants for shelter and sustenance — but modern technology has upset the natural order of things. The pandemic hasn’t helped matters much either but in Iceland, the national forestry agency, Skógræktin, found a novel workaround for the sanctions on physical contact: why not hug a tree instead?

Skógræktin rangers cleared snow from two-metre wide tracks, and the agency shared tips for socially distanced tree-hugging on its official website: “Tree hugging is a healing act. Be careful not to hug just for a moment. Take hold of the tree and wait until you begin to feel the amount of life begin to flow into you from the tree.” This is not as hippie-headed as it sounds. There’s plenty of scientific evidence that hugging trees gives us a happiness hit of oxytocin, serotonin and dopamine, and new-age ecologists swear that trees reverberate in a rejuvenating fashion, literally earthing us when touched.

At our national arboretum, Eastwoodhill, curator Martin Weaver says visitors are often caught snuggling up with the tallest tree in the garden, a 57-metre towering Australian stringy gum. And who can blame them? This mountain ash, Eucalyptus regnans, with its ribbons of flaky brown bark, almost begs to be peeled like a banana.

In lamenting the loss of “frequent pre-pandemic human hugs”, American horticulturist Lloyd Singleton has encouraged visitors to his workplace, the New Hanover County Arboretum in North Carolina, to get up close and personal with trees.

“Hugging a tree is a safe, rewarding alternative,” he wrote in his local newspaper. “The spongy bark of a longleaf pine (Pinus palustris) practically hugs back. The highly textured and sturdy periderm of a live oak (Quercus virginiana) grounds me in its embrace. The silky smooth and nearly soft peel of sycamore (Acer pseudoplatanus) calms my soul. I encourage you to try the same, engage your senses and feel the reward.” 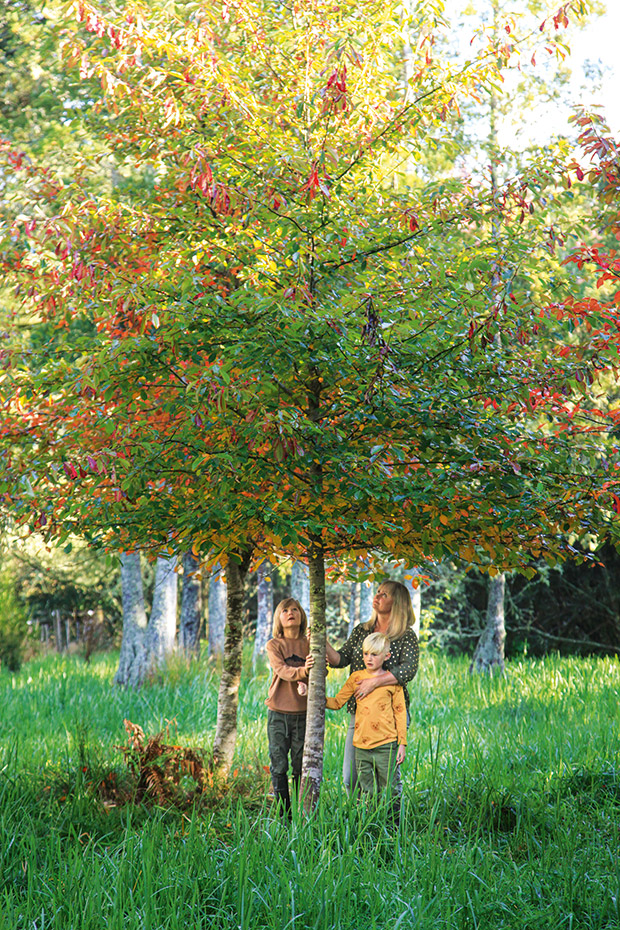 I have practised what Lloyd preached, taking a tree-hugging tiki tour of our farm. I stroked the bark of the 10-year-old black tupelo trees (Nyssa sylvatica) my husband and I planted to mark Arbor Day in the early days of our ardour. They’re half-grown now, their bark slightly more rough than smooth, like suntanned legs thirsty for moisturizer.

I fondled the flaky phyllo pastry of a silver birch, Betula populifolia ‘Whitespire’, and stroked a mexican alder, Alnus jorullensis, its raspy bark like the lick from a cow’s tongue.  I spooned a silver dollar gum, Eucalyptus cinerea, nuzzling my face into its furrowed trunk. I cosied up to a craggy Hesperocyparis macrocarpa, as scaly as a lizard. I tried to decipher the braille-like bark of a native kahikatea, Dacrycarpus dacrydioides, wondering what it might have to say.

Should you ask a tree for its consent before you cuddle it? In Melbourne, you can. In 2013, council officials created an interactive map of all 70,000 public trees in the inner-city (see melbourneurbanforestvisual.com.au). They then assigned each tree a unique ID number attached to an email address so that arboreal health and safety hazards — a fallen trunk, a broken branch — could be remedied. But that’s not what happened. Rather than report problems, Melburnians began emailing their favourite trees to tell them how much they cared for them, how much they appreciated their shade and solidarity, how grateful they were for their coexistence.

Biophilia got the better of me. “G’day mate,” I wrote to Tree 1040575, the bunya pine in Fitzroy Gardens whose Jabba the Hutt bark I remember stroking on my first visit to the city. “When our Covid vaccination programme is complete, I hope to sit in your shade once again. Please don’t drop a cone on my head. Love, from across the ditch, Lynda.”

Less than 24 hours later, my old bunya buddy replied from across the trans-Tasman bubble. “Thank you for your kind words. I’ve been pine-ing for my human fronds to return to the city! I’ll do my best not to drop any cones on you. Hope to see you soon. Your frond, the Bunya pine.” Hugging trees brings comfort and calm, but that’s the first time a tree has ever made me chuckle.

BARKING UP THE RIGHT TREE

In the bleakness of a barren winter landscape, specimen trees that sport army fatigues of khaki and cream or trunks of shimmery silver or copper are always a talking point. Arbor Day may have passed but it is never a bad idea to plant a tree, and the wetter months are the best time to do so. 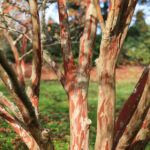 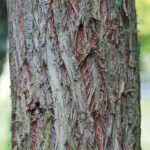 For attractive orange and cream bark on a small tree, plant the exfoliating chilean myrtle, Luma apiculata, once known as Myrtus luma. Crepe myrtles (Lagestroemerias) also have attractive peeling bark but with the bonus of bold summer blossoms.

In the maple family, choose from Acer griseum, the paperbark maple, which sloughs curling sheets like cinnamon quills; the striped snakebark maple, Acer davidii; or the coral-bark maple, Acer palmatum ‘Sango-kaku’, which looks like its bare stems have been spray-painted red.

There was once a time when crafty tree grafters produced ornamental cherry blossom cultivars with an interstem of Prunus serrula, the tibetan cherry famous for its flaking mahogany bark. Gardeners got the best of both worlds — shimmering bark in the low winter sun and a sumptuous spring blossoming — but, sadly, this habit appears to have fallen out of horticultural fashion. Prunus serrula does still flower, but its bark is much better than its blossom.

Lynda Hallinan’s Blog: The best-laid plans of mice and women