Lynda Hallinan’s getting all fired up for the cooler weather Lynda with her sons Lucas and Lachlan. The firepit is from Auckland’s Koko Classics.

Lynda Hallinan looks forward to the ‘ritual annual catharsis of combustion’ every autumn.

Isaac Newton has a lot to answer for. Whenever I step foot in our orchard in autumn, I half expect an apple to plop onto my head in an “Aha!” moment. But it’s not just falling fruit, but entire trees toppling that confirm Newton’s gravitational theories.

As specimen trees and shelter plantings come of age in my country garden, what goes up almost inevitably comes back down. Gale-force winds rudely gut shelterbelts, boundary trees falter over fences and laden fruit trees split under the weight of their own crops, resulting in emergency chainsaw amputations instead of the cosmetic tree surgeries carried out by urban arborists.

On the plus side, Newton’s laws of motion ensure that those of us who live on farms are rarely short of firewood. This year, I’ve harvested a veritable fruit bowl of fig, apple, pear and peach kindling to stoke bonfires as lyrical as wine-tasting notes, with full-bodied branches of chestnut and almond underlaid by eucalyptus, liquidambar, cypress, mānuka and lemon-scented satinwood. 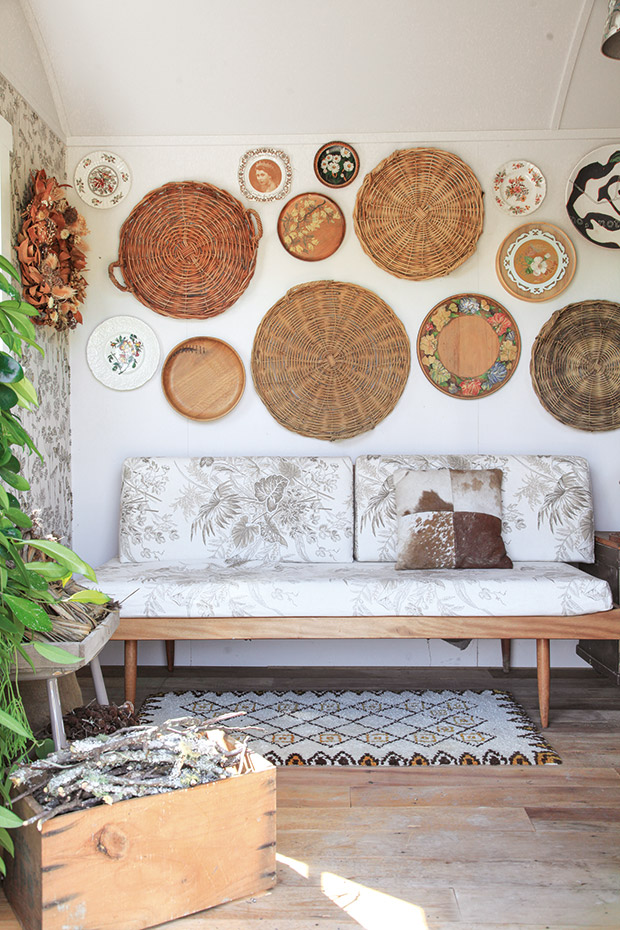 Lynda’s hut is decorated with her collection of large woven cane basket platters. “They’re hung on picture hooks, so if I need to serve a big batch of scones, I can easily whip one off the wall,” she says.

When my husband bought this land 25 years ago, our closest neighbours had just planted a screen of slender satinwoods, Nematolepis squamea (previously Phebalium squameum), above his driveway. A member of the citrus family (Rutaceae), this Australian evergreen tree has aromatic foliage and small clusters of honey-sweet white flowers in spring. It’s prettier than a pittosporum if topped as a hedge but left to its own devices, it runs out of oomph and proves as short-lived as it is quick growing.

A few summers ago, the entire stand succumbed to drought and carked it, and then the neighbours sold up. Their cadaverous copse is still — mostly — standing, though with every blustery nor’easter that blows through, we get a free load of firewood delivered across our driveway. Fortuitously, phebalium hardwood burns fiercely as well as fragrantly; Taranaki plantsman Glyn Church reckons it has the hottest wood of any tree that can be burnt green (as soon as it is felled).

In autumn, I always feel a burning desire to light fires. I’m not the only one. When the fire permit season opens, multitudes of inflammatory advisory notices are posted on our community Facebook groups, silencing the usual quibbles about slow drivers on the hills, hoons doing burnouts and horse manure whodunnits in the village green car park. As I tidy up my garden at the end of the season, composting can’t compete with the ritual annual catharsis of combustion. This thrill of watching things go up in flames is surely innate, for of all the things Santa has brought my children over the years, the cheap camping-store flintstones were the most gleefully received.

I grew up in a draughty farmhouse, and the fireplace was the heart of our home. Every night in winter, my sister and I would bicker over whose turn it was to fill the coal shuttle or empty the ash bucket before we could compete with the cats to hog the warmest spot on the hearth rug.

Getting the wood in at night was one of my least favourite jobs. Not for the physicality of lugging logs but for fear of encountering wētā, wasps and wily centipedes in our woodshed. The only chore I despised more was picking up the fallen cabbage tree leaves that littered our back lawn so they didn’t strangle the lawnmower — but that was more tedious than terrifying.

How times have changed. These days I quite enjoy twisting and tying bundles of dried Cordyline australis leaves into natural fire-starters, and rather than being afraid of invertebrates, I actively encourage insects to take up residence in the purpose-built bug hotels in my organic garden. (Not that I have much choice in the matter as my son Lucas, who is currently farming ants in an antique oak dresser in my office, won’t let me burn a single log without first inspecting it for inhabitants.) Over the lockdown, I thought I’d teach my kids a lesson about the value of child labour. I offered to pay them 10 bucks in pocket money for every sack of pine cones they collected from their grandfather’s paddocks. It cost me $70 to exhaust their enthusiasm, but their joy was quickly rekindled when I let them ignite our fire pit with flaming torches of zebra grass (Miscanthus sinensis ‘Zebrinus’) dipped in mineral turpentine by their mother.

Was it safe? Not by modern standards, but Isaac Newton would have approved. As a budding scientist, when he wasn’t getting bonked on the head by apples, he was poking sewing needles into his eye sockets to investigate how our photoreceptor cells perceive colours (pressing your finger down on a closed eyelid is a slightly safer way to experience this), or staring at the sun’s reflection in a mirror, burning a black hole in his retinal tissue in the process.

Another eye-opener about Newton: he carried out all these experiments at his home in Lincolnshire in 1665-66, while his studies at the University of Cambridge were on hold. Why? Because the university was temporarily closed due to a bubonic plague epidemic.

It was, he later wrote, “the prime of my age for invention”. Having felled a shelterbelt of craggy conifers with needle blight, Lynda had a brainwave and decided to recycle the timber rounds as decorative cladding for her shepherd’s hut. “I’ve always wanted a log cabin, and now I have a lookalike ladies’ hut, the timber rounds held in place with artful stacking and big blobs of Liquid Nails and heavy-duty Gorilla Grip. We started this project in the first lockdown, and two years later, it’s finally finished.” The fingers sculpture is by Coromandel artist Gary Nevin. The brick steps to the cabin were built with chimney bricks recycled from the colonial cottage Lynda is renovating in Hunua.

Epidemics are unusually effective at sparking curiosity and creativity. Had it not been for the Covid-19 lockdowns, I wouldn’t have found time to saw, stack and glue timber rounds cut from felled macrocarpa to the façade of our shepherd’s hut, transforming it into a lookalike log cabin.

My father Jock wouldn’t have spent hours scrolling through YouTube life hack videos and shared the concept of “Swedish fire logs” with his grandchildren. I wouldn’t have started stockpiling quirky seed varieties to sow, including an experimental plot of ‘Mushroom’ popping corn from Egmont Seeds, and I certainly wouldn’t have had a crack at popping it over one of Dad’s flaming logs. 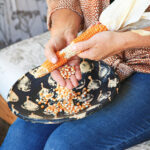 Homegrown popcorn is best stored on the cob until fully dry, at which point the kernels are easily dislodged by twisting your hands around the cob as if wringing water from a wet cloth. 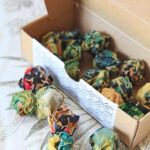 Bee Bombs are almost too pretty to burn. These natural cotton fire-starters are made from beeswax-wrap offcuts and burn for 15 minutes. 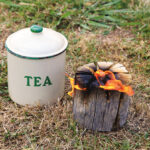 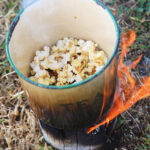 Would it even work? The kids were sceptical. Nonetheless, we flicked a match at a beeswax fire-starter balanced on a pre-cut log and waited for the flames to turn to glowing embers within. Then I husked a handful of kernels into an enamel billy can, added a generous glug of olive oil and hit the start button on my stopwatch.

A minute elapsed, then two.

One hundred and forty-one seconds later came the first unmistakable hiss and muffled pop, followed in quick succession by the machine gun firing of kernels exploding against the enamel lid.

“No great discovery was ever made without a bold guess,” said Newton. With a few strategic chainsaw cuts, it’s fun to turn a single log into a nifty portable campfire known as a “Swedish fire log”. This simple technique for a self-ventilating, self-contained camp cooker has been used in Scandinavia for centuries.

● Use a chainsaw to cut large round branches or logs into uniform lengths about 20- to 30- centimetres long. Safely secure each round in an upright position, then make three or four deep cuts across the top, creating six to eight chimney slits. The larger (and drier) the log, the longer it will burn.

● To start a fire, put a single paraffin firelighter cube or a Bee Bomb (primroseandco.co.nz), an upcycled fire-starter, in the central cavity of the log and set it alight. The log will begin to burn from the inside out as the directional flames are fed by oxygen sucked in through the slits.

● Within 10 minutes, the embers inside the log will be glowing red hot, but the outer rim won’t have caught alight, so the flat upper surface remains stable. Put a cast-iron skillet, kettle or Dutch oven on top and start cooking, or skewer marshmallows on sticks and toast them to perfection.