Oamaru’s Whitestone Cheese Co. is riding a wave of international critical acclaim after recent achievements at the world’s biggest cheese competition in Wisconsin USA and a trophy from the New Zealand Champions of Cheese Awards.

At  the Wisconsin World Champion Cheese Contest 2018, Whitestone’s  Ohau Goat’s Blue achieved a high accolade with 4th place in its category with a near perfect 99.7 out of a 100 – an incredible result and just 0.1 points off the bronze medal.  Ohau Goat’s Blue is a new addition to Whitestone’s Premium Black Label range. The goat milk comes from a Washdyke farm just north of Whitestone’s Oamaru cheese factory, and the cheese is made with Whitestone’s Windsor Blue culture.

With 98.85 points, Lindis Pass Camembert was placed 5th, beating French rivals in the hotly contested Camembert category. This recognises the skill of the Oamaru cheesemakers and the world class quality of their local North Otago fresh milk. 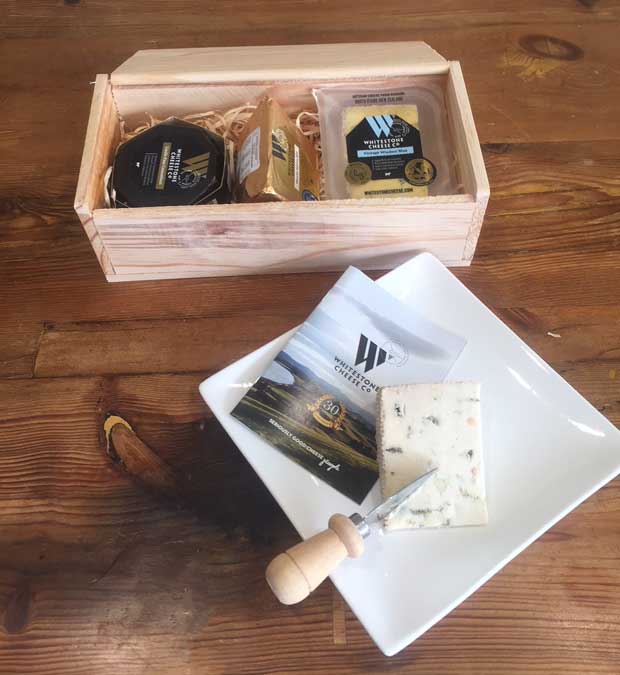 Whitestone’s latest creation, Shenley Station Blue was awarded 97 points in the Flavored Soft Ripened category. Production of Shenley Station Blue only started at the end of last year after an extensive bio-prospecting project searching for an original New Zealand blue mould Penicillium Roqueforti strain. Usually only sourced from the Roquefort caves in France, Whitestone found their own strain in a moldy bale of hay at Shenley Station in Fairlie and have named it 45 South Blue. More cheeses will be developed by Whitestone using this new blue mould strain.

Whitestone Farmhouse received a stunning 98.95 in the Soft Ripened Cheese category. Simon Berry of Whitestone Cheese Co says this is great recognition for a unique New Zealand cheese and especially significant as it was the first cheese that started the company made back in 1987.

In another outstanding result just announced, Whitestone Cheese Co was named New Zealand’s Favorite Cheese Company winning the New World Cheese Lovers Choice Trophy at the 2018 NZ Champions of Cheese Awards. Simon Berry says the win is particularly special as it was achieved from New Zealand cheese consumers’ votes and the only category Whitestone entered at the NZ awards.

In 2017 Whitestone Cheese celebrated 30 years and completed a significant upgrade of its Oamaru factory to increase production to meet growing local and export demand.

For more on Whitestone visit: www.whitestonecheese.com