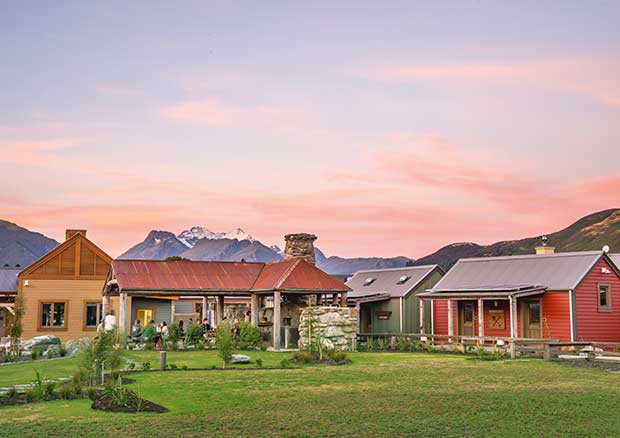 Two American environmentalists have turned a run-down campground into a sustainable development where technology and nature work together.

Camping holidays have long been a part of New Zealanders’ lives – getting away from it all and sleeping under canvas or in a caravan is embedded in our collective DNA. So when word got around in 2014 that there were plans for the old camping ground at the northern end of Lake Wakatipu, not everyone was thrilled.

But instead of a bad-news item about a disappearing way of life, the invigorated Camp Glenorchy is on track to redesign what holidays look like.

Camp Glenorchy is the brainchild of US philanthropists Debbi and Paul Brainerd, who both have form when it comes to good design and good works. Paul, a former journalist, revolutionised desktop publishing when he invented the system known as Pagemaker in the 1980s.

Since selling the company to tech giant Adobe in the 90s, the Brainerds have channelled their not-inconsiderable funds into environmental projects to the benefit of a range of communities. 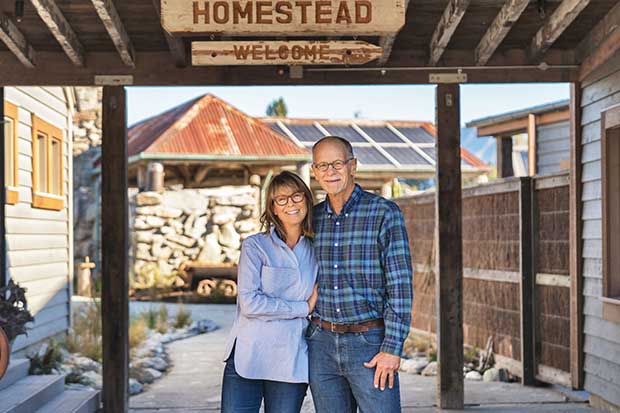 Debbi and Paul Brainerd are global environmentalists who have set up a foundation to fund organizations that focus on conservation projects.

The couple, who have been visiting New Zealand for two decades, have owned a property in Glenorchy for 10 years, and saw huge potential in the tired site at the gateway to the Routeburn track.

“Having driven past the campground for several years, I often thought it would be nice if someone could invest some time, energy and resources into the property,” Debbi Brainerd says.

After much consultation with locals, they started by transforming the old shop into a more modern retail experience (complete with café), then they turned their attention to  the accommodation.

So far, so normal, you might think. But the Brainerds set the bar high by insisting that the whole operation met the stringent standards of The Living Building Challenge. This incredibly tough sustainability standard requires buildings to operate as cleanly and efficiently as a flower, with seven “petals” or areas of focus: place, water, energy, health and happiness, materials, beauty, and equity.

Artists, craftspeople and energy-management specialists were part of the team, working alongside traditional tradies, architects and engineers. Camp Glenorchy boasts the South Island’s largest solar “garden” where surplus energy generated during the day is stored in batteries to be used at night.

“We’ve visited many sustainably designed buildings around the world, and I often found them to be stark and a little unfriendly,” Debbi says. “What we’ve tried to create at Camp Glenorchy is an experience that integrates the latest technology, while also delivering a warm, friendly experience to our guests.”

They also wanted to make it work for the locals. Determined to involve the community in the development, they held about 400 individual consultations to gather feedback and input on their plans. Not everyone approved but more than a third of the small local population (Glenorchy has about 365 residents) were involved in the project.

The Brainerds won’t be drawn on how much the redevelopment has cost, but they have gifted Camp Glenorchy to the community. Some 25 locals are now employed at the complex and all operating profits go to the resident-led Glenorchy Community Trust. Mosaic pathways are crafted from stones gathered from the surrounding areas.

The camp, which opened to visitors in March, can sleep up to 70 people across seven cabins (with two bedrooms and a bunkroom in each), two eight-berth bunkhouses and seven powered campervan sites. Prices start at $75 for a bunkroom bed or powered campervan spot and rise to $395 per night for an en suite king or split-king singles cabin room.

A more traditional – and cheaper – camping experience is still available at the neighbouring Mrs Woolly’s Campground, which is owned by the same organization. An unpowered campsite here is $35 per night.

Trampers and eco-conscious holidaymakers have long held that the only thing they should leave behind is footprints. Proponents of The Living Building Challenge have a similar ethos, believing “every act of design or building should make the world a better place”.

To that end, Camp Glenorchy has been designed to generate as much energy as it uses over a 12-month period. The development aims to use 50 per cent less energy than similar-sized accommodation facilities.

The camp has been registered and certified with Zero Energy, which requires projects to generate 105 per cent of their energy needs via renewable sources and provide on-site energy storage for resiliency, among other things. If you drive there in your electric car, there will soon be access to the solar energy to charge it up during the day. Even more impressive, the system is so efficient that Camp Glenorchy gets about $4 worth of electricity for every $1 spent running it.

Smart design means the complex is as energy efficient as possible. Each cabin has 310mm-thick exterior walls, built using a traditional timber frame and an additional layer of highly insulated structurally integrated panels (SIPs) to provide sound and heat insulation.

A shared kitchen gives happy campers the chance to bond.

Glenorchy is well-known for temperature extremes, so the cabins use up to 60 per cent more insulation than required by the New Zealand Building Code and triple-glazed windows ensure all buildings retain warmth on frosty days.

The need for artificial lighting is kept to a minimum thanks to light tubes that channel natural light into rooms and a smart booking system means rooms are only heated when needed, with the right amount of hot water stored for the number of people in each cabin.

Guests are encouraged to monitor their own energy use via in-room iPads that record how much they’re using compared to other visitors.

Glenorchy, tucked into the base of the Richardson and Humboldt mountains, is already known for its jaw-dropping views – not for nothing is the 45-minute drive from Queenstown described as “the most beautiful road-trip in the world”. The Brainerds and their team were determined that their development would not detract from the wonders of the natural environment. Artist-in-residence Jeffrey Bale created the stone mosaic pathways, inspired by the braided streambeds of the Dart and Rees rivers at the head of Lake Wakatipu.

“I’m passionate about the guest experience, and I’ve been inspired by local landscapes and artists,” Debbi says. “I wanted to draw on this inspiration to help create a welcoming environment that brings heart and soul to the cabins and shared gathering spaces.

It was important to me that we create this feeling of warmth at Camp Glenorchy by using reclaimed wood wherever we could. We repurposed metal sidings from three old woolsheds that were taken down in the area, as well as materials we were able to recycle from Christchurch.”

GOING TO THE GROUND

They work by circulating a fluid through buried pipes (Camp Glenorchy has nine 75 metre-deep bores) and extracting heat from the ground, which is then transferred to the building using a heat pump.

To keep the cabins warm, hot water is circulated from these thermal stores (that look similar to hot water cylinders) through pipes installed under the concrete slabs. Heating water for the thermal stores is done using both the ground-source heat pumps and solar thermal collectors (mounted on rooftops).

While the use of ground-source heat pumps in New Zealand is increasing, growth is slow when compared to Europe and the US. Installing one is possible anywhere in the country, but they are more efficient in colder climates (in comparison to air-source heat pumps) due to the relatively stable ground temperatures.

TAKING UP THE CHALLENGE

Camp Glenorchy is registered under the Net Zero Energy pathway, which requires it to generate at least the same amount of energy as it uses (in a one-year period) on site via renewable sources.

It’s not off-grid – the development draws power from the grid when on-site energy generation isn’t sufficient to meet demand (typically in the evenings and on short winter days) and feeds energy into the grid when it’s generating more than is required.

To achieve Net Zero Energy certification, a building needs to submit energy data collected over the course of a year. Camp Glenorchy has 313 kilowatt-hour meters installed on site that record how much energy is being generated, exported and used.

At the end of the development’s first operational year, this data and additional documentation will be submitted to the ILFI. This is followed by an independent audit, a site visit and a report to ILFI, which then decides if the development can be Net Zero Energy-certified.

Meeting the requirements of the LBC means buildings are measured by performance, so design and construction teams have to figure out how to make it happen rather than just tick a checklist of sustainability features. Buildings like this can cost more to design and build, but these expenses can be offset by lower costs over the building’s lifetime.

Rainwater is the main source of drinking water at  Camp Glenorchy, with underground tanks able to store 60,000 litres (UV filters ensure the water is safe and pleasant to drink).

The site aims to use 50 per cent less water than similar facilities – the Brainerds estimate some 300,000 litres will be saved annually thanks to the use of composting toilets.

Three purpose-built wetlands naturally treat all the grey water from bathroom sinks, showers and washing machines, while ‘black water’ from the camp kitchen, existing staff houses and excess leachate from the composting toilets is pre-treated via an activated waste system before being pumped to the wetlands.