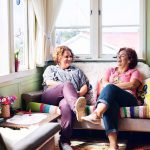 Joanne (left) and Leanne have yet another laugh-out-loud moment. 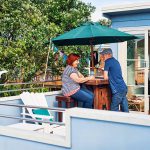 At the end of yet another perfect Raglan day, Cheryl and Peter hang out on their deck. 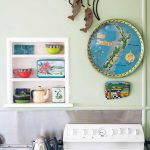 Cheryl found the fish skeleton at a local garage sale and even the artwork is from op shops or just ‘picked up here or there’ which may sound ominous but is entirely innocent. 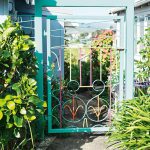 Cheryl gave into the nagging of her sisters in regards to upping the colour palette of her bach and made a cracker job of the back gate. 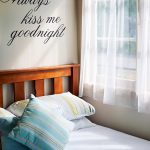 Inside it is not such a riot of colour but rather a cool, calm, pastel retreat- just how Cheryl and Peter like it. 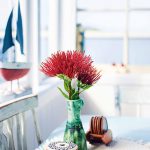 Others have also been finds at the Raglan Creative Market, which celebrated its first decade late last year. 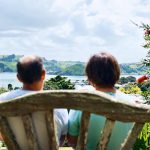 Dale’s quiet place, one of the few times where he actually sits still. 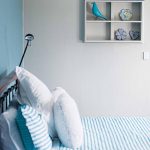 Inside their bedroom is cool and blue. 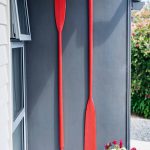 And outside they reach a compromise using a tempered grey that is offset by a vibrant red trim. 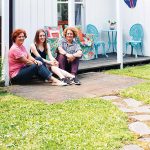 Phoebe in one of her preferred places- slap bang between mum Leanne and her treasured Auntie Joanne. 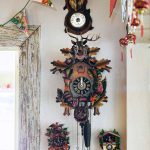 Leanne inherited the large cuckoo clock from Tom, which she soon took back with her to Raglan where it was first purchased 45 years ago. 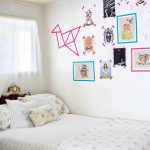 Phoebe decorated her room with art she collected from her Frankie magazine, which she then put up with washi tape, a Japanese masking tape that can be repositioned. 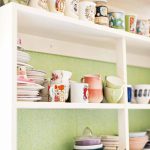 The mug collection is a source of great amusement as the family tries to find the most outlandish mugs they can as presents for each other. 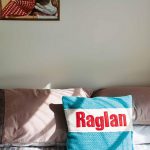 The Raglan cushion comes from Zinnia, a local shop in the village, affectionately dubbed Ragtown. 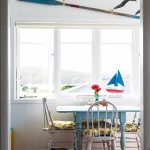 A little wooden boat peers wistfully out at the real thing from a window at Cheryl and Peter’s blue bach. A starfish garland, a sprig of pohutukawa, a battered old oar and some seabirds forever caught in flight on the wall of a seaside bach – it’s beginning to sound like a quintessential Kiwi ballad. 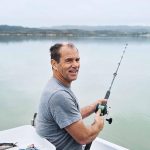 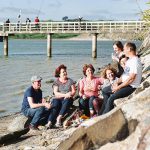 There’s nothing like a quiet drink on the beach at the end of the day. All over New Zealand at day’s end, this is what lucky bach-dwellers are doing. Peter, Cheryl, Leanne, Joanne, Phoebe, Maureen and Dale spin a few yarns, shout down each other’s jokes, thank their lucky stars.

In truth the weather this day was a little rough around the edges. Although it was balmy where the sun was trapped among the branches of the old plum tree or where it puddled in the nooks and crannies of the garden, there was nevertheless a chilly and insidious breeze and a few grey clouds were building up to a black tantrum.

More stories you might like:
The spirit of Logan Lore: The Wānaka couple finding resilience, mental strength and purpose through outdoor adventures But in the minds and certainly in the hearts of Joanne, Leanne, Cheryl and Dale Perry it is always sunny in the coastal town of Raglan where they grew up as four of a posse of seven and to which they return at every opportunity. Back then it was an even smaller town but they had big lives.

They ran barefoot and carefree as most New Zealanders of a certain age did and those that are lucky still do. They were poor but they didn’t really know it. They dived for mussels, speared flounder, picked pipi, dragged home sugar sacks full of gurnard given by the local fishing fleet, raided the fruit trees…. So there it was, a contentment of Perrys, perhaps even an ecstasy of Perrys on those long-ago, salt-encrusted, sun-warmed summers. So what if Dale got his first job on the milk cart at just six years old; so what if the clothes were hand-me-downs and op-shop finds; so what if dad worked long hours at the local motor-engineering business; so what if mum baked twice a day to feed not only the kids but also their father’s co-workers when he bought them home for morning and afternoon tea?

So what? It might not have been hard cash but they were, in all other ways, billionaires. 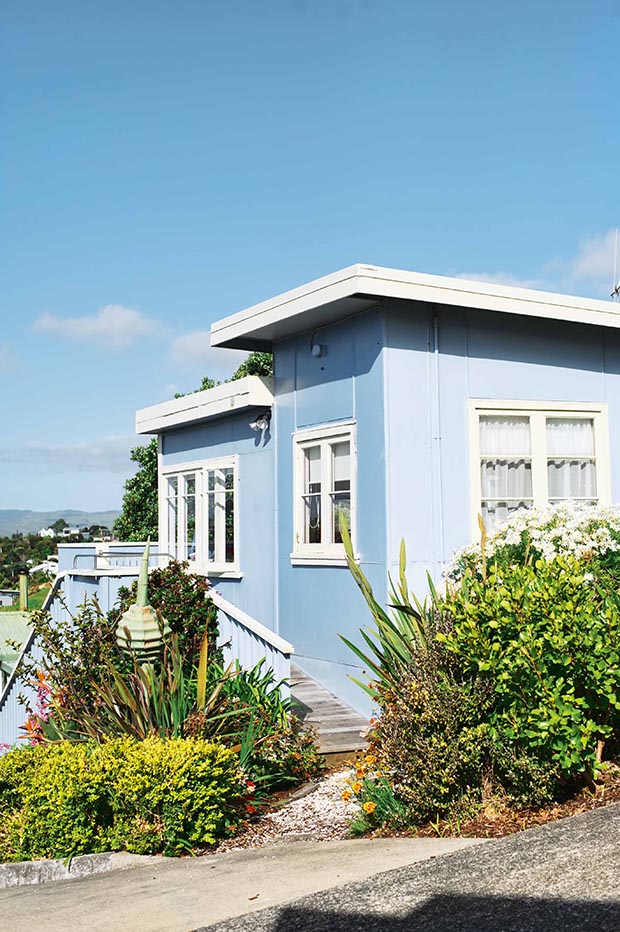 They grew up and set off on life’s grand adventure but when they least expected it they would still find Raglan sand in their shoes, smell the ocean in their hair. It felt real to them but was mostly imaginary, unlike the For Sale sign that appeared one day outside a century-old fisherman’s cottage next door to where their father had worked. 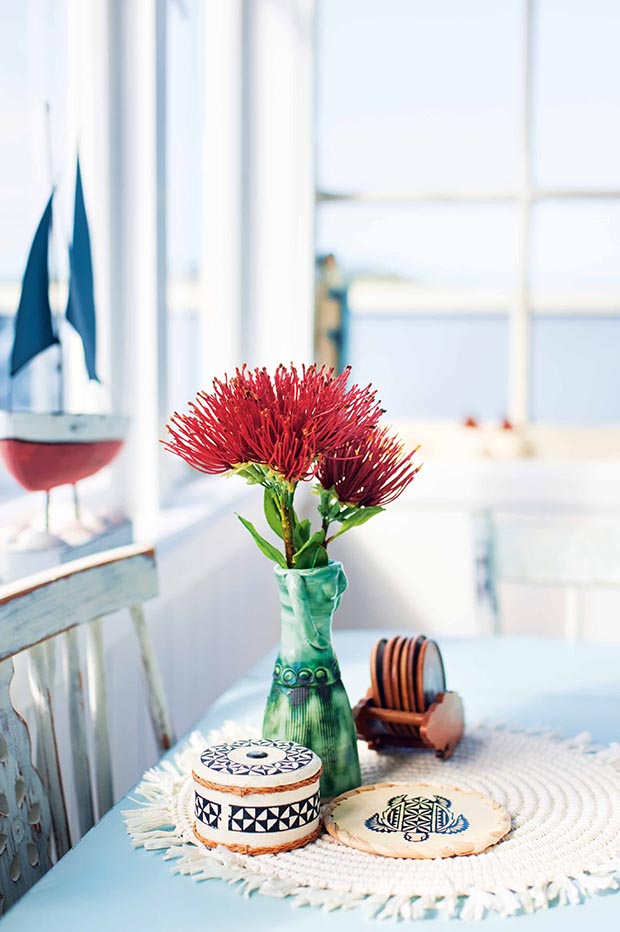 That was very real and for Joanne and Leanne it was what they had been waiting for. They went halves, as twins are wont to do, and all too soon and at the same time not soon enough, they had the key not only to the cottage but to both their past and future.

Leanne, now Mrs Perry-Meyer, took full advantage of husband Louis’ carpentry skills, bringing the 100-year-old dwelling and its 60-year-old add-ons up to scratch. It was not without its small domestic dramas as Louis is a precise and meticulous renovator whereas his wife is a give-me-a-pot-of-paint-and-I’ll-give-you-a-new-house-in-a-day kind of gal. 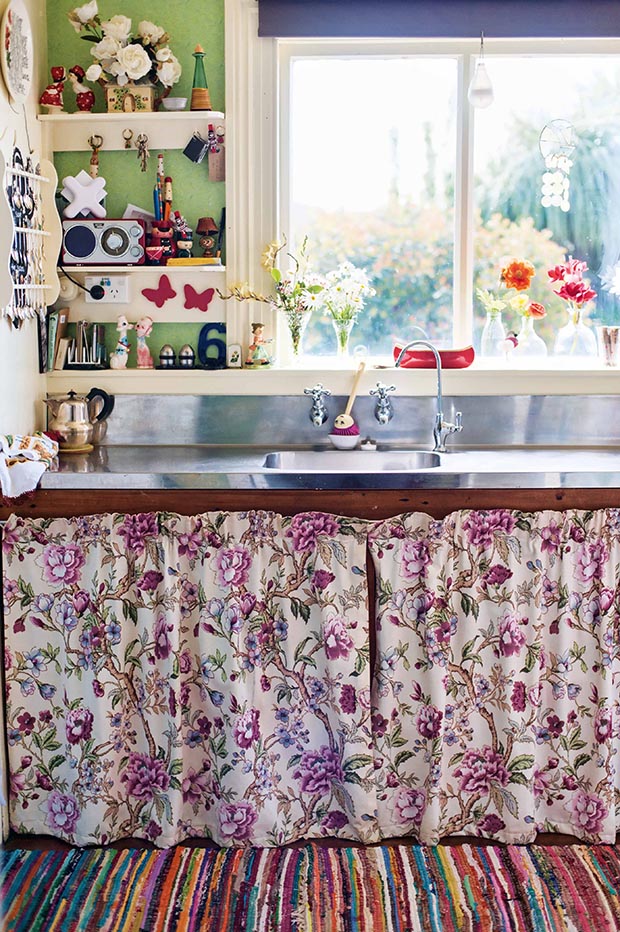 The twins’ kitchen as it is now- it could change anytime as they discover a new look in one of their craft and decorating books and magazines.

But together the three of them pulled it together into a bach they love so much they find it very difficult to stay away. Joanne, because of her science-policy liaison job with DOC in Wellington, which involves some international travel, isn’t quite so lucky. But she intends to eventually retire to the bach and take up a self-sufficient, organic lifestyle. In the meantime she can only grit her teeth in envy when that singular twin ESP dobs Raglan-bound Leanne in. It took a few years and life adventures – university, building careers, marriage, children – but four siblings and three baches later, the bulk of the Perrys are back; full time would be preferable but for now they make do with every opportunity. Dale and his wife Maureen found their own piece of Raglan first, just around the corner from where his younger sisters are now. It, too, is a three-generations-deep cottage.

From it Dale watches the play of light over the pa sites across the water and the tide as it comes and goes, both powerful and mesmerizing and one of the few times he sits still. From the bach his sister Cheryl Perry-Andersen also watched but it was the cottage over the road she had her eye on while she stayed with her brother. Five years ago the wait paid off and she and her husband Peter now own the little cornflower-blue 1940s bach. They had fun renovating it and making it their own, although her sisters claim she had to be encouraged into colour.

But it has now been Raglan-afied – a Perry-ism they all aspire to – with a bright yellow door. The back door, her sisters accuse, but Cheryl holds her ground. Life should always hold an element of surprise and if her back door is more dashing than the front then that is just one example. 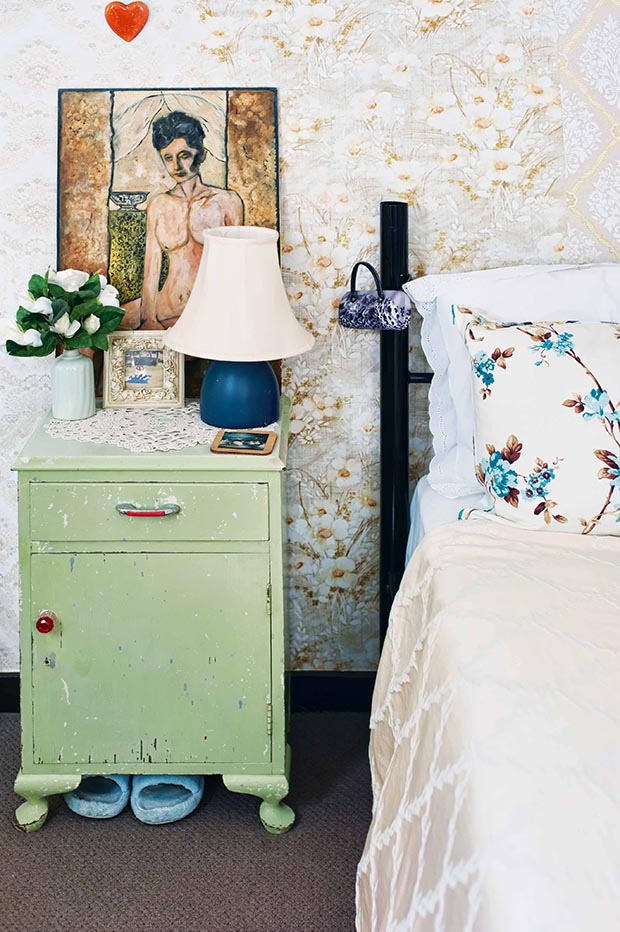 There are three more Perry brothers – Tony, Robin and Michael – but the seaside is not for them. They think the others are crazy to spend so much time in sleepy Raglan when there are much more exciting and lively places that don’t include sand-in-the-sheets charming – and perhaps eccentric – baches.

What is actually crazy, declare the Raglan-ites, is that they all have homes in Hamilton when everything they really want is there on the coast – peace and quiet, a strong feeling of community, family history past and family history to be made, long walks along the beach and short walks to the cafes, art galleries, shops and facilities of the village centre. There is enjoyment in the small things such as visiting the recycling centres, the op shop and the local market (open on the second Sunday of each month at the Raglan Old School Arts Centre) to find small treasures and odds and ends they can turn into something creative to decorate the baches.

Their father Tom, they admit wryly, would crack up because when he and their mother Bev did the rounds of the same places, Leanne and Joanne were mortified. They never wanted to be seen in the op shop – now they just about live there. Tom was the local Mr Fix-It and could repair just about anything and would have little patience with the extreme wastage of the world today.

He passed that attribute onto his children telling them they had to find ways of fixing things, that there nearly always is a way to fix something. Leanne, Joanne, Cheryl and Dale took that to heart when it came to Raglan. They missed their childhood home and there had to be a solution to that. And there was – with determination, hard work and even greater resolve, with three little baches they fixed it. WHAT THEY LOVE BEST:

Cheryl: Pottering around the bach, painting and titivating. I love my garden and the pohutukawa. “And your bath,” chorus the twins. “And my bath”, Cheryl concedes. “I come here to relax.”

Peter: The quiet, the chance to put my feet up, or do some fishing, crank up the barbecue and just sit and admire the view.

Dale: The others like to chill out but there is so much to do if you want to. Kayaking, fishing, walking, pottering around the garden, picnics, taking the grandkids fishing and boating, seeing them having a great time.

Maureen: Having the grandkids, Christian (seven) and Miller (six), Connor (seven) and McKenna (five) and seeing them running around without a care. The only time I see our collie dog, Millie, flat out exhausted is when she is playing with the kids.

Joanne: I absolutely love everything about Raglan. I fully plan on dying where I was born in the local old folk’s home, which was once a maternity hospital.

Leanne: The best thing about Raglan is that it is just beautiful. It is all about simplicity and you don’t come here to compete about who has the biggest boat. Properties still have gardens and you can walk everywhere. You can finish work in Hamilton and 45 minutes later you are here. It’s a lovely time warp – the Christmas parade still has a proper lolly scramble and no kid has ever been mortally wounded by a flying sweet. 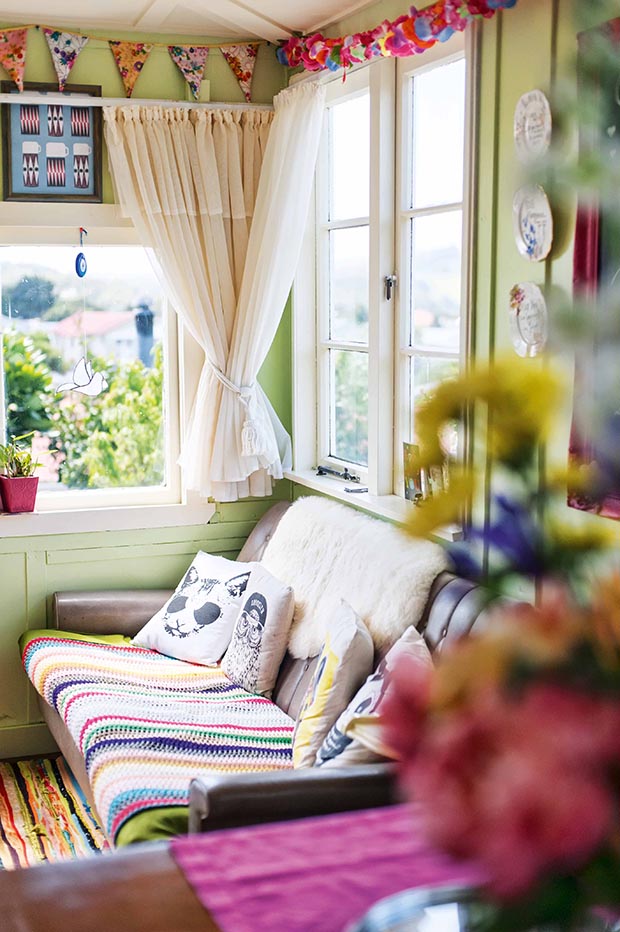