We came to the party with our fashion mistakes. Like eco-chic Santas we lugged sack-loads of cast-offs into our friend’s lounge for the clothes-swap event.

Taking turns to showcase our errors; we held up too-clingy dresses and their floaty antithesis that could serve as tents. T-shirts in sallow-inducing shades were exhibited, alongside loud-print pants and candy-coloured polar-fleece tops. But it wasn’t just the bad and the ugly being aired. Proving one person’s throw-aways are another’s treasures, articles of clothing were eagerly swooped upon amid happy cries.

It was the fifth clothes-swap I’ve been to. What’s surprised me most is how the masses of clothes keep appearing each time we congregate, every four to six months. Admittedly some of the items are boomerang pieces, ricocheting back and forth round the circle as we all take them home to give them a go. They’re the garments that beckon so seductively from a hanger but never quite work their way into wear.

That’s the beauty of a clothes-swap though: it costs nothing to take home that retro Egyptian-print dress in gold and black for a trial before re-releasing it at a later meet.

Most of the clothes that arrive at our parties, however, are making their clothes-swap debut. Some things have barely been worn while others are vintage treasures. Snakes shed their skin several times a year.

Apparently we females have a similar ability, moulting from wardrobes that keep expanding. It’s a snowballing phenomenon – according to statistics, consumers buy five times more clothes than we did in 1980. But in this era of concern for Earth’s welfare, new clothing is dirty fashion.

More stories you might like:
Guest blog: Elien Lewis uses deep-mulching to grow a bounty of produce in her shady Whitby garden

Second to oil, the clothing and textile industry is the largest polluter in the world.

The downside to acquiring new threads is the amount of water, pesticides and insecticides used to farm cotton; the toxic wastewater generated from the textile industry, the sweatshops used in clothes production, the travel-miles the clothing industry generates, and the nano-particles of plastic appearing in our oceans from the tsunami of synthetic clothing flooding the Earth. More than 100 billion new articles of clothing are produced annually while landfills are groaning under the 31-kilograms of shoes and clothing each person annually dumps. 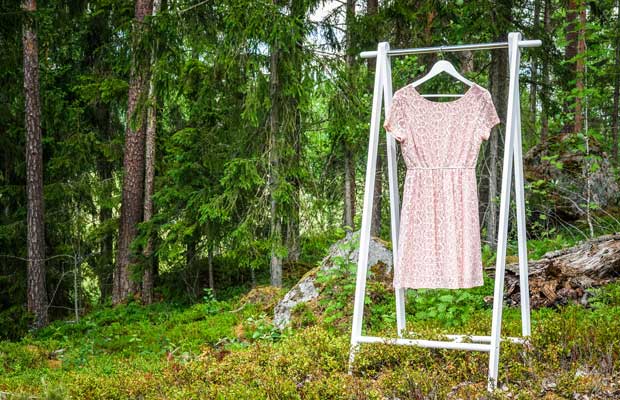 It’s said if every person stopped buying new clothes for a year and opted for recycled outfits, the world would save 49-trillion litres of water and enough electricity to power 132 million homes.

Meanwhile the savings in carbon dioxide emissions from the fashion industry would be equivalent to keeping 25-million cars off the road for 12-months.

Clothes recycling is fashion’s new black. But while op-shops can yield treasure, clothes-swapping parties are way more entertaining. You can learn a lot as a person holds up their wardrobe rejects for inspection; discovering who used to sashay around nightclubs in skirts the size of extra-wide belts, who had a professional era of ironed cotton shirts and who had a post-maternity frumpy phase of easy-breast-access cardigans in forgiving shades of brown. We aren’t there to judge, but sometimes we can’t help shrieking with incredulous laughter.

There are no takers for the brown velvet smock inherited from the bohemian era of somebody’s mother. Nor does anyone leap forward to claim postage-stamp sized frilly knickers. An unspoken code appears to exist when it comes to recycling underwear. The vintage tennis dress is snapped up, however, and several women want the brightly coloured skirt. Voters decide who suits it best if nobody graciously backs down.

Occasionally a shirt ends up back with its original owner in a scene of joyful reunion. Everyone understands. It isn’t always easy letting go of things you’ve loved. Clothes hold history. Partings can be filled with sorrowful sighs as people resign themselves to bigger bodies that will never again fit those lush velvet jeans or that designer dress.

I was liberating clothes from necessity. Forced into ruthlessness by a chest of drawers which no longer closed without effort, I practiced the 12-Month Rule to achieve my pile of hand-me-downs. If I hadn’t worn an item in the last year, I made myself farewell it.

The sadness of detaching from unworn loves is replaced by the pleasure of giving at a clothes-swap. There’s something heartening about watching a friend seize gleefully upon the rust-coloured trousers you’ve hoarded. Sometimes there’s indignation too, when nobody appreciates the cut of a jacket or the swing of a skirt. Beauty is indeed, in the eye of the beholder.

Everybody finds things they want. Like a sped-up demonstration of geology, mountains of clothes dissolve and regrow; mounding beside different women. Meanwhile, at our centre, the heap of rejected clothes reaches Everest proportions. Its next stop will be a charity shop.

I was rueful upon leaving, attempting to squash my new pile of acquisitions into a bag. Wincing at the thought of my protesting drawers, I wondered briefly whether the wrap-around elephant skirt and Robyn Mathieson over-shirt were really my style.

At home, I tried on my new wardrobe. The skirt was a definite mistake. The merry-go-round of clothes recycling started once more as I put it aside for the next clothes-swap.