As the debate over the country’s polluted waterways heats up, Polly Greeks writes a love letter to Aotearoa’s rivers and streams.

On Far North summer days when the air is so heavy with humidity I can hardly move, it’s easy to sympathize with the cows standing knee-deep in our local stream. In heat like that any sane creature heads for the shade or cool water. Unfortunately, our swimming holes are all downstream from the wallowing cows and it may be their bovine influence thickening the stream flow and causing brownish green algae to slime across the river stones.

Ever since a carload of visitors we took to the waterhole got sick last year, James and I have lost our enthusiasm for daring guests to leap from the roadside into the deep pool below. It’s no comfort to learn this stream could be officially “swimmable” under new governmental water-quality standards when the only thing changing is the criterion for swimmability, which allows for a doubling of the acceptable level of E coli. 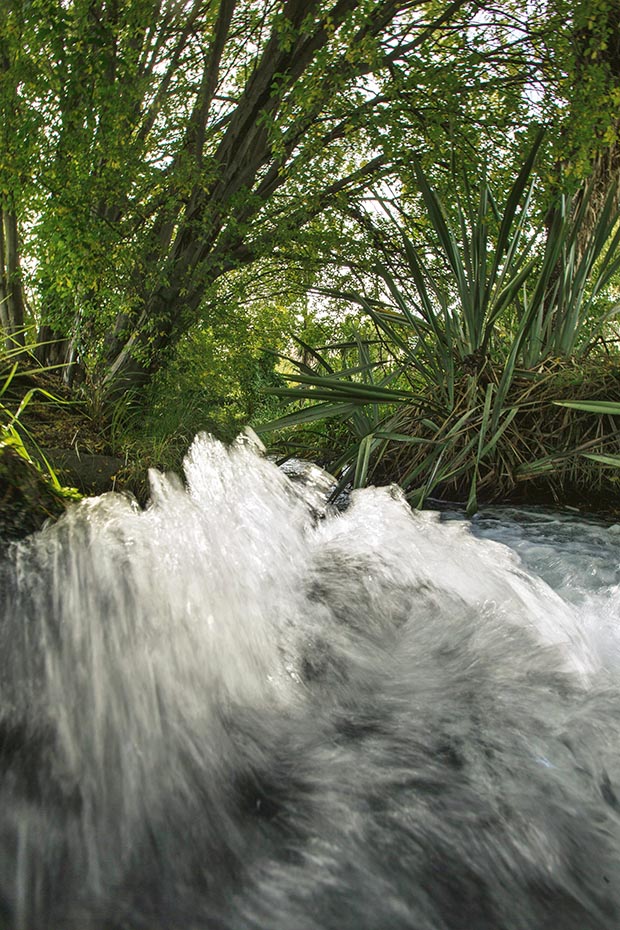 Māori believe every river has mauri; its life principle or vital essence.

Judging from the messages of rage and grief read aloud lately on RNZ, New Zealanders everywhere are mourning the ill health and deaths of our rivers. With more than 60 per cent of our monitored waterways now deemed unsafe for swimming, how many of our happy experiences in and along the water are doomed to become nostalgia from a yesteryear?

“Aren’t clean rivers the birthright of each generation?” someone on the radio demanded to know.

As a child, I drank without fear from the rivers I swam in. On day hikes, a cup used to dangle from the back of dad’s pack, easily accessible for scooping up a mouthful from any stream we encountered in the hills. Today, my family still drinks from a stream. Luckily for us, we live high in headwater country and collect our water not long after it’s bubbled from the forest floor. Our children know we depend on the health of our stream for our own good health. They may turn on a tap in the house, but they both understand it is part of the stream flowing out – the same stream in which we’ve found tiny caddis flies, freshwater crayfish, black eels and minute snails. Healthy water is full of life, they are learning. “Not only were the salmon absent, but more ominously there were virtually no trout or kahawai either.”

Māori believe every river has mauri; its life principle or vital essence. As children, camped on the banks of remote rivers in the back of beyond, my brother and I got to know a few of these energies well; flinging ourselves into their cold rushing songs and falling asleep to them flowing through the night like a strange ancient lullaby.

In predawn shadows they ran the loudest; a burbling, gurgling melody rushing endlessly on, singing of untameable forces, impermanence and the ceaseless drive to reach somewhere else. Unable to stay away, my father would carefully unzip the tent, tip-toeing out into the sunrise with his fishing rod for another day of losing himself in the flow.

We spent summers in rivers, beside them and on them; carried between boulders, splashing in a white churn of rapids and sliding into dark silken runs that murmured secrets into overhanging banks. These were undomesticated rivers full of life and aliveness. Unpolluted, unfettered by stop banks or concrete boundaries and untapped by irrigation schemes, they welled from the earth; clear, glistening veins of life force to immerse yourself in and gulp at so the joy of their chatter and bubble ran through you. 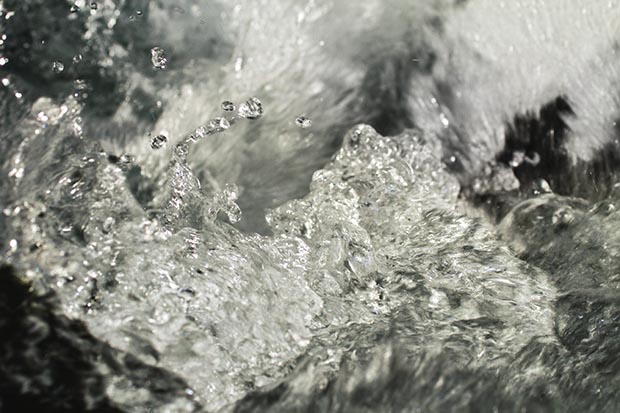 If the Earth is a body, then of course the world’s riverbeds form its veins, carrying the life force needed for every cell on the planet.

Ruamahanga, Ngaruroro, Tauherenikau, Manganui o te Ao, Pakuratahi, Otaki, Akatarawa… Like an invocation, these river names summon the heady summer scent of dried mud and sun-warmed stone. Even the Hutt River had its magic, with deep narrow gorges and pools of polished black if you took the time to explore. They were a dialogue you could enter if you cared to, although sometimes they gave you no choice. Me in the Otaki River gorge in a flash flood, clinging to rocky cliffs as brown water thundered past, sucking my body sideways as I inched myself along in the torrent; or swept off my feet crossing the rising Waiohine in a storm. With heart-thumping exhilaration, rivers taught me that they affirm life by threatening to drown it.

The rivers I want my children to know are the ones running around us but also through us. Not just as blood in our veins but as streams of music and words and ideas flowing out. Rivers are creative.

“What is a stream of consciousness?” I want them to ask. When we feel stuck, why do we describe ourselves as blocked, as if a channel’s not open? As above, so below: will our inner rivers dry up if our outer ones cease?

Follow a river, I’ll tell my children as they head off into the world. Know they are always a journey, a current, a road that will take you to somewhere. Must our rivers be alive for the metaphors to work? 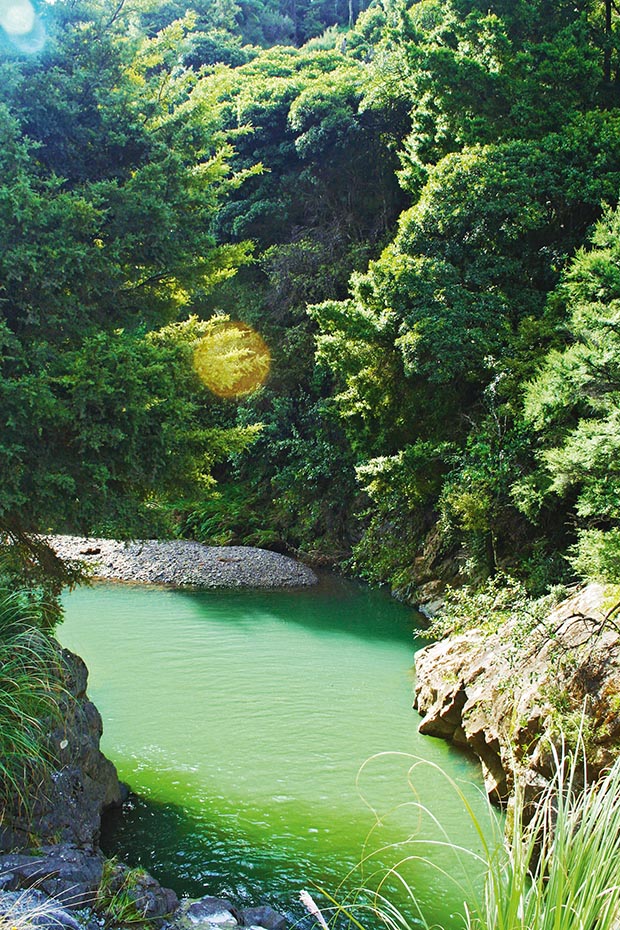 The local swimming hole where teenagers of a certain fortitude hurl themselves from the high rock on summer’s hottest days. The cows congregate upstream to cool off.

Rivers take but they also give and as a child I thought their aliveness would always be so. Who wouldn’t conserve such vigorous beings? So when I journeyed south a while ago it was shocking to cross so many empty riverbeds on State Highway One between Christchurch and Dunedin. Equally disturbing is the chug-chug of water pumping ceaselessly over verdant paddocks in landscapes whose summers used to be sun bleached; and my father’s sad observation that this year very few anglers were catching fish on the mighty Rakaia.

“Not only were the salmon absent, but more ominously there were virtually no trout or kahawai either.”

If the Earth is a body, then of course the world’s riverbeds form its veins, carrying the life force needed for every cell on the planet. What happens when we build dams, add toxins and restrict flow? What happens to poisoned humans with clogged arteries and thick, sluggish blood?

If the government’s not committed to taking the necessary steps required to save our rivers, perhaps it’s up to everyone grieving to take action? At present my own sense of helplessness stems from a feeling of being an ineffectual dribble of sadness and anger. But as the stream burbling outside the house reminds me, all waterways start from small beginnings, only growing in strength as tributaries join forces. What would it mean to protest as a river; not trickling but surging in an unstoppable flow towards the final goal of a freshwater nation that’s truly 100 per cent pure?