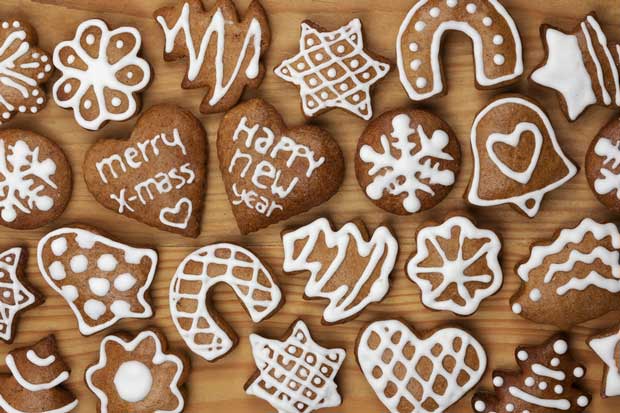 This weekend I’m making traditional Swedish pepparkakor biscuits with my granddaughters, aged 4 and 2.5. These delicious little spice biscuits are not too sweet, easy to roll out and quick to bake. Stars, hearts and Christmas tree shapes work well but embrace imperfection, especially with toddlers. We like to make holes in the top of the uncooked shapes with a straw, ice the biscuits with royal icing and hang them on the Christmas tree. Warning: the dough tastes good on its own, don’t expect more than 80 per cent of the dough to make it to the oven.

Beat together butter, sugar and golden syrup until pale and creamy. Mix baking soda with boiling water and add to butter mixture with flour, ginger, cinnamon and allspice. Stir to combine into a pliable dough. If not using at once, cover and chill for up to a week or freeze until needed.
Divide dough into 3 pieces and roll out each piece to 5mm thickness, using a little flour to dust the roller if necessary (avoid using too much flour as this dries out the mixture). Cut dough into shapes using cookie cutters of your choice. Carefully transfer to prepared baking trays, allowing a little space between biscuits for spreading. Form unused dough into a ball and roll and cut again.
Bake until just starting to colour (about 15 minutes). Remove from oven and allow to cool on the trays; they will harden as they cool. Store in an airtight container until ready to ice.
Ice biscuits with Royal Icing up to 5 days before serving (they will soften just a little once they have been iced).
To make Royal Icing, gently beat the egg white until slightly airy. Add sifted icing sugar and beat for 10 minutes. Spoon into a piping bag and pipe decorations onto cookies. Allow to set before finishing with ribbon if desired.

More stories you might like:
Barbecue recipe: Pork and Lemongrass Fritters with Kimchi Mayonnaise
Discuss This Article