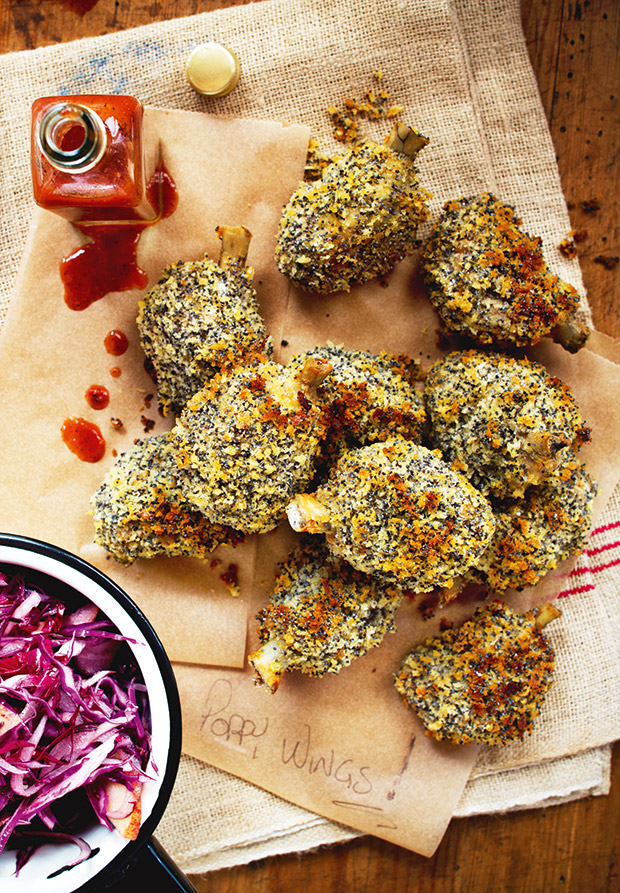 Forget Kentucky Fried Chicken, here’s a healthier and even tastier twist with red wine and poppyseeds.

The first time I marinated chicken in red wine and soya was at a restaurant in Auckland called Kermadecs. The chicken would be marinated for two days, then coated in cornflour and deep-fried until crisp.

I’ve made this version a bit healthier with an alternative crunchy coating of panko crumbs and poppyseeds – which pop in your mouth and have a party – and baked them instead of frying.

Leave the red wine out if you want to serve these to kids. Maybe omit the chilli in the sauce too, depending on how adventurous they are.

Place the wings into a pot big enough that they’re all touching the bottom, and add the wine and soy sauce. Add just enough water to cover the chicken. Bring to the boil, then reduce the heat and simmer for 5 minutes. Drain, then place the chicken wings in the fridge to cool.

In a large bowl, mix the panko crumbs, poppy seeds, olive oil, salt, and pepper. Place the flour and egg wash in two other separate bowls.

Remove the skin from chicken. Dust the wings with flour, dip in the egg wash, then the poppy crumbs. Bake on a tray for 25 minutes. Serve with the slaw and hot sauce.

Mix the onion, cabbage, radicchio, and apple in a large bowl.

Remove the leaves from the rosemary and place in a mortar and pestle with the flaky salt. Grind together.

In a separate bowl, add the rosemary-salt to the vinegar, sugar, and oil and mix well. Pour this mixture over the slaw and toss to combine. 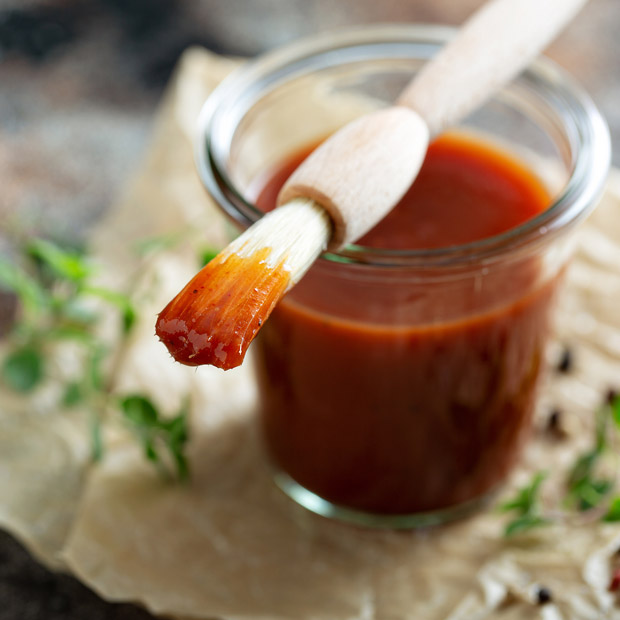 The hot and spicy sauce is so good, I recommend doubling the recipe.

Heat the oil in a saucepan over a medium heat. Add the onion and cook until soft. Add the garlic and cook for one minute, until soft.

Reduce the heat, add the tomato paste, cumin, and smoked paprika and stir. Add all the remaining ingredients. Stir until combined, and cook until slightly thickened, around 10 minutes.

Taste and add salt, pepper, and more chilli if necessary. Blitz until smooth. Pour any leftover sauce into a sterilised jar and it will keep for months in the fridge.