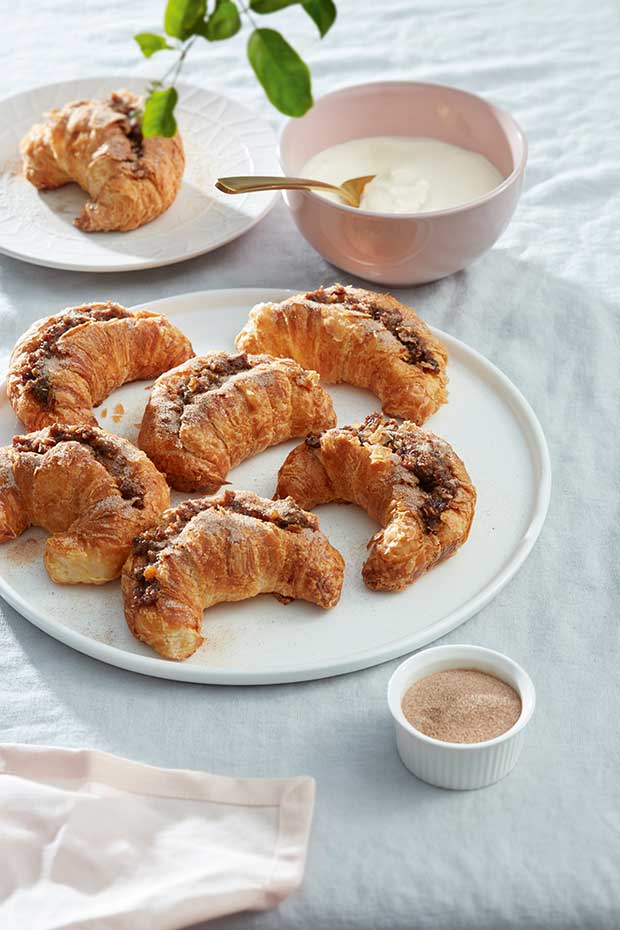 Get Christmas morning off to a cracker start with Ruth Pretty’s Christmas Mince Croissants.

Begin Christmas day with coffee, perhaps a glass of champagne and this festive take on filled croissants. Purchase frozen ready-to-rise croissants and, following instructions on the packet, let them thaw and rise overnight. Bake them while you get ready and when they are cool enough to handle, fill with the Christmas Fruit Mince.

Using a serrated knife, make a cut lengthwise across the top of each croissant to about three-quarters of the depth of the croissant. Fill each cut with a heaped tablespoon of Christmas Fruit Mince.

If you wish, place the croissants on a low-sided baking tray and warm through in a preheated 150°C oven for 6 to 7 minutes. (If the croissants are freshly cooked, leave this step out.)

Combine the sugar and cinnamon in a small bowl and sprinkle lightly over the croissants. Accompany with whipped cream – it is Christmas after all. Serves 8

In a food processor fitted with a metal blade, pulse the sultanas to roughly chop. Remove the sultanas from the processor and add the raisins, dates and apricots. Pulse to roughly chop as with the sultanas. Roughly chop the currants by hand and add to the bowl with the other fruits. Mix together. Add the sugar, apple, banana and brandy and combine. Store in an airtight container in the refrigerator for 2 to 3 months, or freeze for up to 1 year. Makes 380g