Lisa Scott has always been afraid of heights or, to be more precise, falling. Now she’s attempting to overcome that fear by embracing three high-altitude action-packed activities including Wildwire Wānaka, the world’s highest waterfall cable climb.

It has been an arse of a year, 2020. One long uncertain yawn of sign-in and sanitize and a low-level hum of constant stress, making me simultaneously numb and terrified. The time had come to do something truly scary. This way, I thought, I’m doing it on my terms, not at the whim of a stupid virus. So it was that I went on the scariest Tinder date, like, ever.

I started the weekend with a Brazilian. Turns out this isn’t what I thought it was, it’s much less, and probably not the most ideal thing to do when facing days in harnesses, but I had thrown caution to the wind. Or lost the run of myself. These days it’s hard to tell the difference.

Have you ever noticed that the lexicon of adventure sports is all about conquering, and things being epic? I’m not an epic kind of woman, just to be clear. I’m a ‘sitting on a rug in the yard drinking rose’ kind of woman, and yet I was going to paraglide, winch myself up the world’s highest waterfall climb and fall into the unknown on the Nevis swing, and do all these things side by side with a complete stranger.

LORD OF THE RUNGS

Paragliding is weather dependent and when conditions caused my flight to be cancelled, I was off to Wildwire, the world’s highest waterfall cable climb. Getting to Wildwire, at the foot of Treble Cone in Mt Aspiring National Park, means passing through Wānaka’s most famous climbing area: Hospital Flat.

Approaching the waterfall, I realise it is extremely high and the wire bridges as thin as hair strands. This kind of climbing, called via ferrata, originated in the Dolomites, an Italian mountain range where ropes and ladders have been used for centuries to allow mountain crossings. During the First World War this type of climbing became well known as battles raged back and forth across the alps with soldiers vying for control of mountain peaks. 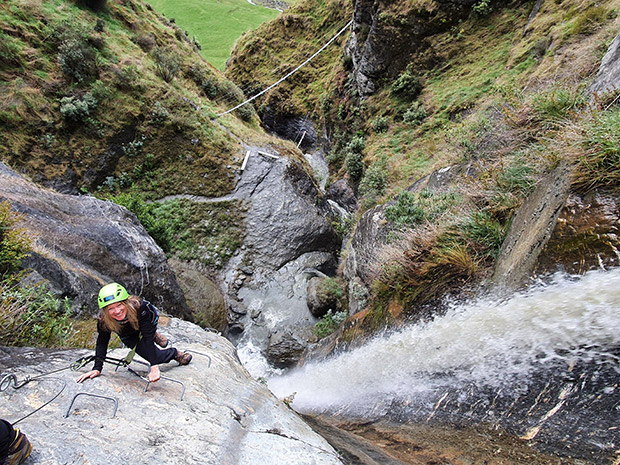 Today steel ropes, attached to rocks on route, let ordinary people experience the splendour of climbing. Heavy gauge steel wire and the system of ‘crab claws’ as well as a carabiner that can hold a tonne mean there are always three points of contact.

With my date, the Casanova of Wānaka (an experienced climber) and a guide alongside me, we began to climb and I experienced a mental shift. As I gained altitude, I gained attitude. It was a massive self-esteem boost to knock off level 2, the height of the Eiffel Tower. I made it over see-sawing swing bridges and negotiated bare rockface, glorying in views of the valley far below and the feeling I had underestimated my own abilities. After months of waiting for a sketchy pestilence to get me, it was nothing short of wonderful. 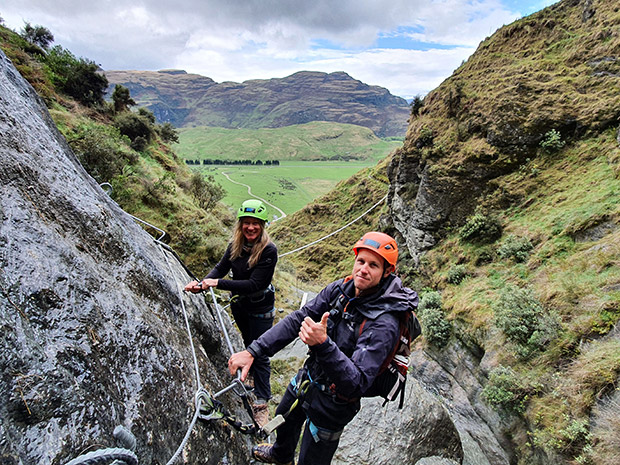 Walking down the winding path back to the carpark, legs gone Elvis, the Casanova of Wānaka and our guide suddenly remembered where they knew each other from. “I was there when you broke your back paragliding!” said the guide. They shared warm recollections of ambulances arriving at Hospital Flat. I was never going to paraglide. Ever.

More stories you might like:
From Berlin to Blenheim: a 1974 Mark 1 Ford Capri on the road again

My phone buzzed. The weather had cleared, a space had just opened up, would I like to fly? No, I would not. However, chickening out wasn’t possible as Wānaka Paragliding land in a field right next to Wildwire. Before I knew it, I was heading up the Treble Cone road and being strapped into another harness.

The tandem pilot’s name was Brooke. His mouth was moving, maybe giving instructions? I didn’t hear a thing. My feet were on the earth and then there was a pull as the wing lifted and I was floating through the sky sitting as though in an armchair, all terrestrial worries left behind. 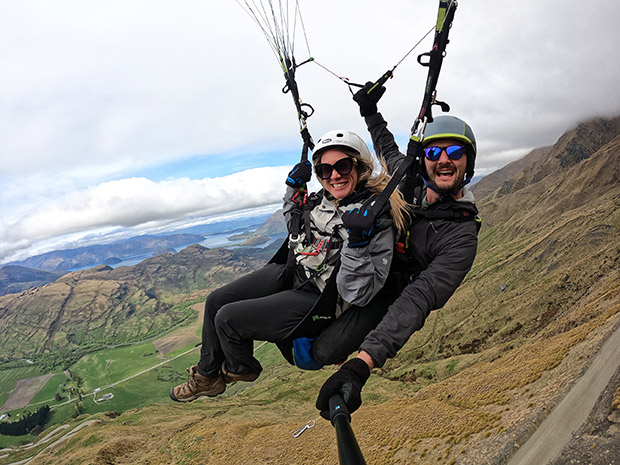 The sensation seemed acutely familiar, because I had met it before, in dreams. Floating, swooping over the patchwork of fences and paddocks, blue lake and mountains, I couldn’t stop smiling or saying, “Wow”.

It was and is the most exhilarating, beautiful and moving thing I have ever done, and I’ve had a baby. As the philosopher Seal once sang, “In a world full of people, only some want to fly, isn’t that crazy?” Hawks flew alongside, telling Brooke where the thermals were as we hugged the rocky mountain’s side and then, too soon, after the softest of landings, it was over. If I could have gone right back up and done it all over again straight away, I would have.

The next day, and still reeling from the fact that they wrote my weight on my hand, I spent most of the bus ride to the Nevis Gorge concentrating on hiding it. I was feeling a little chaffed and not super-keen on another harness. Thrill masters A J Hacket’s Nevis Swing makes a 300-metre arc but as I’m functionally innumerate this meant nothing to me. It was going to be epic, basically. I went to the toilet about 50 times beforehand.

More stories you might like:
Best-selling author Lesley Pearse talks about 1970s London and her new novel Liar

Hitched together 160 metres above the canyon floor, I shook like a little handbag dog. “All you need to do is sit,” said the Casanova of Wānaka. “You can sit, can’t you?” “I sit a lot,” I said. Winched back up to the platform, my hands shook with adrenaline and I laughed like an insane person, happy, so happy, to be alive in a world that can be chaotic and unpredictable.