Whakatane’s White Goose Orchard produces fantastic feijoas and winning wines, and its owners are huge proponents of the potential nutritional benefits of the aromatic fruit.

It’s probably not often that feijoas get on the front page of any newspaper, but these did. Back in the late 1960s, a feijoa tree in Opotiki produced fruit weighing 450 grammes.

“They were a good half a pound – we were still on imperial measures in those days,” says Tony Firmin, who – with his wife Jutta – was share-milking in the Bay of Plenty town at the time.

The Firmins were also growing kiwifruit and citrus in their garden, and Tony was part of a horticulture discussion group. So, he was very interested in the tree that produced the giant green globes. 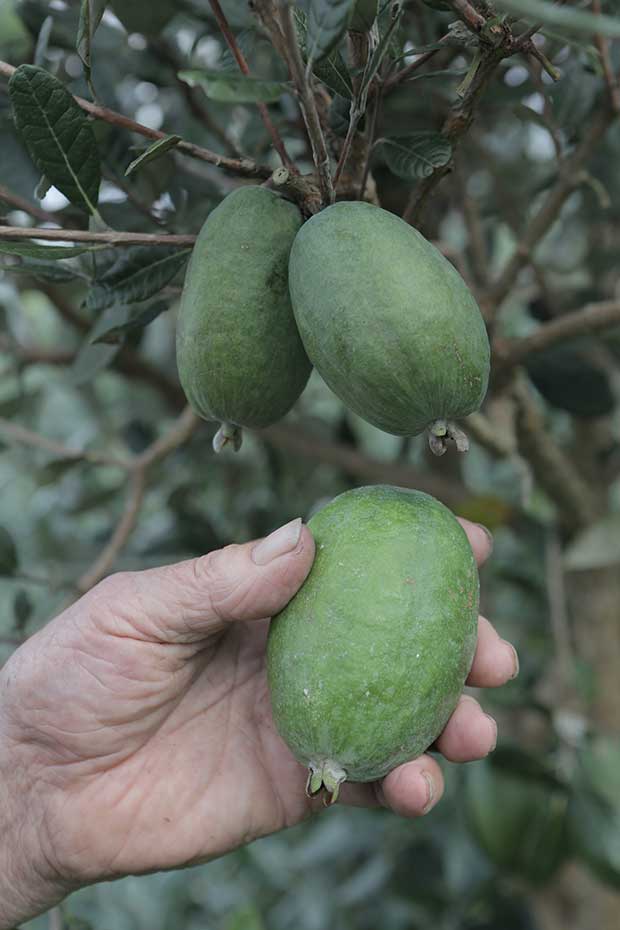 When the family moved to Awakeri near Whakatane in 1972, he took some of the tree’s seedlings with him, growing about 100 plants. “Only about six of those 100 showed any promise, but they became the basis of White Goose Orchard,” Tony says.

The orchard’s namesake comes from the flightless geese – about 70 at the moment – which the Firmins use to keep the grass down, fertilizing the feijoas as they go.

And those trees are crackers. When the White Goose trees were 30 years old, Tony put three of them through a 10-year trial to see what they could produce.

“Over that time I weighed, counted and recorded their fruit. In the last three years of the trial, those trees averaged – take a breath here – 160 kilogrammes per year. To put it mildly, that convinced me White Goose feijoa trees are different from average feijoa trees, which might produce about 30 kilogrammes a year.”

Admittedly, Tony let his trial trees grow as tall as they liked, rather than prune them to a height where the fruit can be reached for easy picking (most feijoas must be touch-picked to reduce bruising). However, it was enough to encourage him to engage a nursery for further propagation.

He gifted the variety to the heritage food plant collection at the Koanga Institute  to ensure the genetics were preserved for future generations. A limited amount are available for sale. 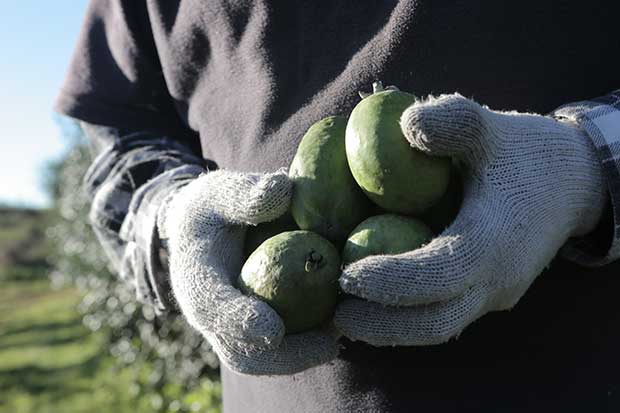 To keep the pickers busy throughout the season, not all of White Goose Orchard’s feijoas are White Goose feijoas.

“Different feijoa types come on at different times, so you need a variety to enhance pollination to get more fruit set, and to spread out production. The best prices are early or late in the season. You’d only grow feijoas in mid-season for processing,” says Tony.

Speaking of processing, Tony has some big ideas to harvest feijoas’ nutraceutical potential. Both Tony and a son-in-law recently recovered from cancer, and – while he’s not saying it’s all down to feijoas – he believes eating the pulped fruit, skins and all, helped recovery. “I’d love to see more research into what’s in feijoas. We know they are good for joints, supporting the immune system, and that there are lots of phytochemicals in the skin – the part most people throw away – and that they’re anti-carcinogenic.

“So, I pulped a whole lot of feijoas, added some ascorbic acid to stop it going brown, and put it in the deep freeze. Then I added a few spoonfuls to my porridge each day. I’ll keep doing it as it boosted my immune system. I haven’t had the flu or cold in years; just the odd sniffle.

Tony and Jutta have dipped into their own pockets to pay for some analytics at Lincoln University. “But it’s expensive, so we can’t afford to commission the level of analysis we believe should be done,” says Tony.

“We hope the government will fund comprehensive research into the benefits of feijoas. If, as we believe, the fruit has great potential in nutraceuticals, that would benefit the regions that grow feijoas easily.”

One of Tony and Jutta’s daughters is working on commercializing feijoa juice. Tony ships feijoas to Vanuatu where she lives; she juices the fruit and puts it into a foil bag at low temperature using a particular machine to preserve all the nutrients and the flavour.

“She has sent samples to two large export markets so far – I don’t want to say which yet – and they have been well received.” 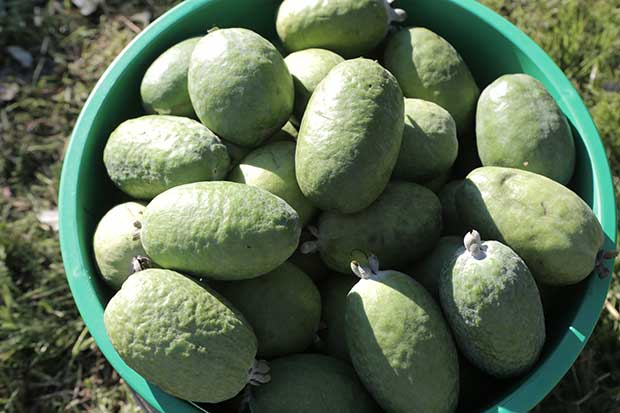 Tony believes it’s crucial the skin is eaten for full nutritional impact. Happily, he’s developed a second feijoa from the White Goose feijoa, which can be eaten, skin and all.

“We call it Golden Goose and has a very palatable skin so you can eat the whole thing. It’s like a Granny Smith apple, it’s very firm and goes golden yellow when ripe.”

The skins also play a big part in Tony’s other product – fruit wines, particularly his feijoa wines. As White Goose Winery, Tony uses fruit grown on his own orchard, or locally, to make fruit wines that consistently win awards.

Tony came to winemaking in the mid-1980s when a hailstorm knocked his blueberry crop to the ground.

“I picked up some feijoas and took them to DSIR (the Department of Scientific and Industrial Research, now Plant and Food Research) and asked, ‘Could you make wine out of this?’ The head scientist – who’d been a winemaker in South Africa – said, ‘sure’.”

Lacking the skills and infrastructure himself, Tony had the wine made in New Plymouth. When he received it all nicely bottled, he decided to learn to make it himself. He signed up to a winemaking course at the Eastern Institute of Technology, traveling to Napier to complete lab work. 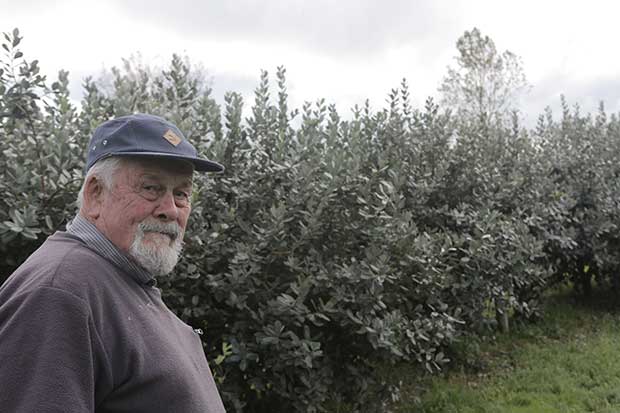 “At the end of the two years, they gave me a bit of paper. Then I got all the necessary licences and got started.” White Goose Winery was then officially established.

“It needs to be ripened fruit. The feijoa in the supermarkets generally wouldn’t be ripe enough. I use fruit that’s dropped, as it’s ripe with all the sugars. Then it’s stored, well ventilated, for a week to soften up,” says Tony. “Then the whole fruit is pulped in a big mixer.

“Some people use a mechanical potato peeler to take off the skin, but I don’t do that because of my belief in the skin’s nutrition.”

The whole pulp is then barrelled, but for less than a week so there’s not too much “skin flavour” in the finished wine.

Then it’s pressed, and the juice fermented for a month, then racked off (where the wine is moved from one barrel to another) to clear it away from pulp deposits and continue fermentation. 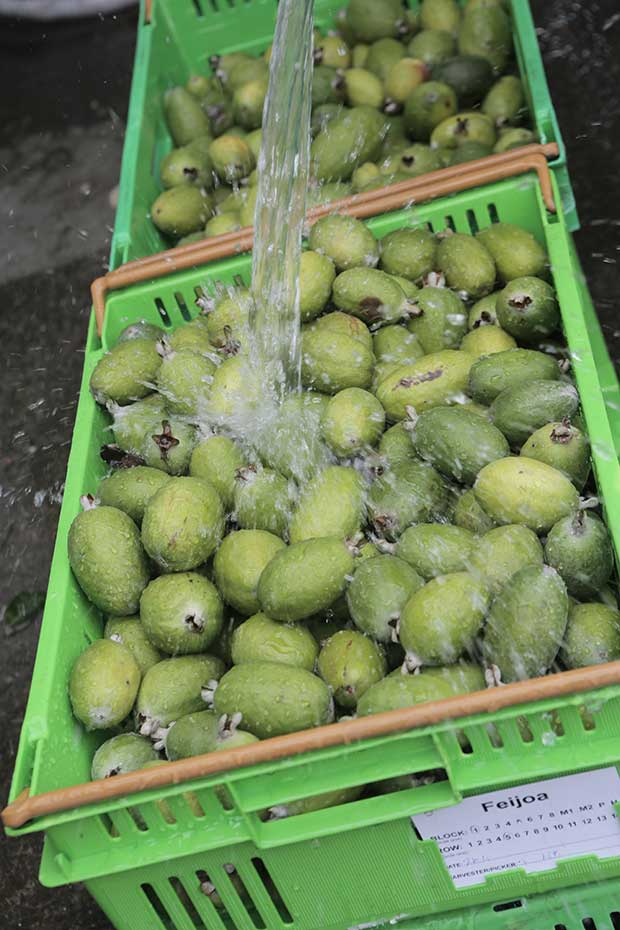 Over the next few months, Tony filters the wine through a series of ever-finer filters and continues to ferment and filter until he achieves the desired clarity. The wine is then bottled at Mills Reef Winery in Tauranga or, for his sparkling feijoa wine, at Soljans Estate in Kumeu.

The feijoa wines are Tony’s best-sellers, but he makes other wines as the fruit is available, often blending wines from different years until he has enough to send off for bottling.

The wines currently available include the feijoa sparkling and still wines, a Japanese-style plum, red plum, three berry red, strawberry, and a boysenberry wine, with a cherry wine currently still in barrels but should be available for Christmas

Tony’s not at all tempted away from fruit to grapes. “I did make a batch of chardonnay for a new grower about 10 years ago. It was okay, but I’m happy with the fruit.”

Don’t be afraid to prune hard: “Maybe not every year, but if it needs a hard prune the amount of fruit that comes can be surprising. But don’t prune hard during a drought or dry year.

Watch the water: Feijoa trees mostly need moisture when the fruit is swelling (mid-February onwards) but can typically survive dry weather at other times.

Best sprays: Hard sprays aren’t necessary, but Tony uses an organic spray with Bacillus thuringiensis, which targets caterpillars. He also uses an oil spray to get rid of a scale that sits on the fruit and sucks the juice out. 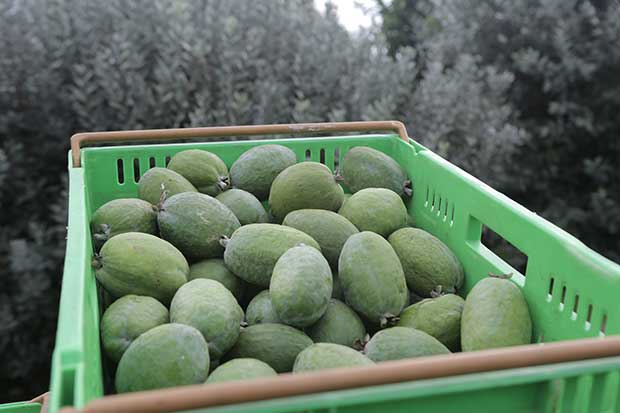 Soil test: A soil test every now and again to analyze the soil’s trace elements is a good idea, Tony says. Pollination problems might be down to the shortage of one or two trace elements that mean the bud’s oviduct forms too narrow for fertilizing pollen to get down to the fruit.

Tony uses a seaweed powder – often mixed in with the sprays – to fix that, applying it around January/February. He also recommends a wide-ranging fertilizer – if Tony didn’t have his geese, he would need to use an NPK fertilizer (nitrogen, phosphorus, potash).

“If it has a pleasant tropical scent, it’s ready. If it smells like cabbage, it’s not.”