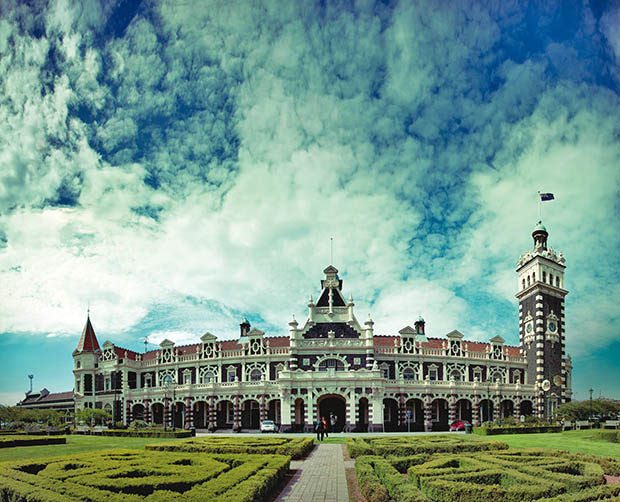 This week in the water cooler, we explore the Resene Architecture and Design Film Festival, are on the lookout for the harlequin ladybird and make lazy granola.

COOL DUNEDIN
Dunedin Railway Station is rubbing shoulders with the likes of Grand Central Station in New York and Mayakovskaya Metro Station in Moscow on a list of the most beautiful train stations in the world. The list produced by Getty Images featured 12 stunning stations of different styles of architecture. Dunedin’s station was constructed in 1904 and earned its architect George Troup the nickname Gingerbread George for its orange/brown and white design. Our latest issue of NZ Life & Leisure features a beautiful photo essay by photographer Guy Frederick outlining many great reasons to visit Dunedin, we also have a competition to win a $3000 action packed weekend for two in Dunedin. Cool Dunedin indeed! 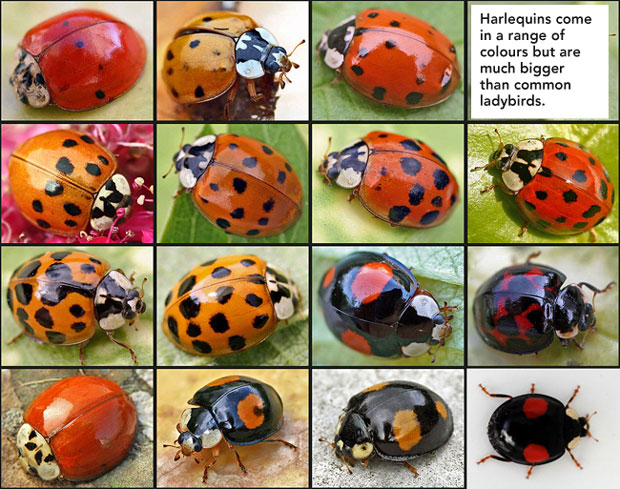 Ladybirds are one of the cutest of insects. But when one drops onto your head in the middle of the night, and it’s 10 times bigger than the normal kind, you can tend to veer towards very poor language.

It’s quite a freaky thing to see one this big, about 7-8mm from head to toe (so to speak). It also stank, a similar smell to a green veggie or ‘stink’ bug.

This is a Harlequin ladybird. They were first spotted in Auckland a couple of years ago but have now spread to the Waikato and Bay of Plenty, and it’s expected they’ll move over much of the country in time.

In other countries (not NZ) it was introduced as a predator bug because its main diet is aphids. You might think that makes it quite useful, but it has a nasty habit of also eating native bugs (including normal-sized ladybirds), and it can damage apples, pears and grapes. That’s bad enough, but when it attacks those fruit, any cider, perry or wine made from the fruit is tainted and not drinkable.

The size is the main giveaway, but as you can see, these ladybirds also have a telling mark on their head and come in a range of colours.
What should you do if you think you’ve found a harlequin ladybird? Collect the specimen, photograph it and contact MPI’s free 24-hour pest and disease hotline 0800 80 99 66.


The Incomparable Rose Hartman – Official Trailer #2 from The Artists Company on Vimeo.

Walking out of a cinema feeling pleasantly surprised by a film I have just watched is one of my favourite experiences. I felt this way last year at the Resene Architecture and Design Film Festival despite the fact that I’m not particularly knowledgeable about architecture. The festival curators do a brilliant job bringing together inspiring films that don’t simply focus on the literal nuts and bolts of construction but instead on bigger ideas around people and the spaces we live in. This year the festival films have been grouped into themes: 20th-Century Visionaries (featuring the work of famed architects such as Sir Nicholas Grimshaw, designer of the Eden Project in Cornwall); Crossing the Divide (exploring architecture and its impact on space); Designing Happiness (design trailblazers such as photographer Rose Hartman, who took the famous photo of Bianca Jagger on a horse at Studio 54); and Urban Futures (considering innovative ways to develop communities, such as urban farms). The festival kicked off in Auckland last night and moves through to Wellington, Dunedin and Christchurch from May to July. I’m hoping to make it to A New Economy which follows several social enterprises and cooperative businesses such as a cooperative craft brewery and a peer-to-peer hardware lab – it sounds like a dry topic, but I’m bracing myself to be inspired. Win festival tickets here
Emma Rawson
Editor, thisNZlife 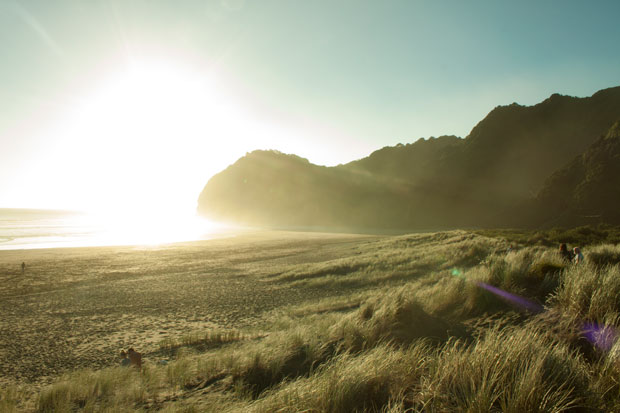 I’m an Auckland newbie and one of the great experiences of moving to a new city is discovering all it has to offer both in its city centre and rural outer limits. When an invitation came my way to join some friends on a trip to Piha, I instantly said ‘yes’. This beautiful west coast beach was stunning during that golden hour before sunset. 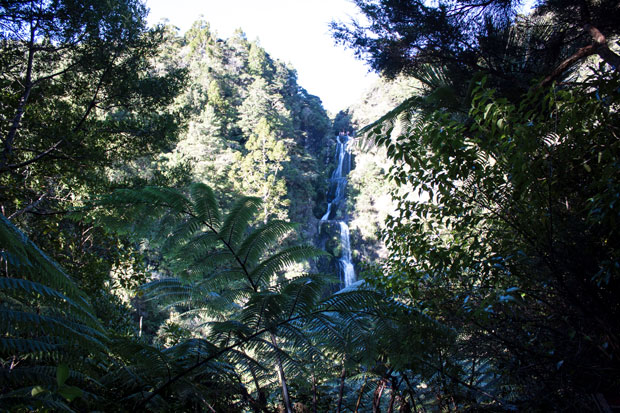 One of the highlights for me was the walk up Kitekite Track with its stunning panoramic views – perfect for a photo-worthy moment. The track leads to a majestic skyscraper of a waterfall that is very much worth the moderate 1.8km hike to get there. The first glimpse of the bottom of the falls is breathtaking, however the hidden pathway up to the left is where more magic happens and leads to the highest point of the waterfall. 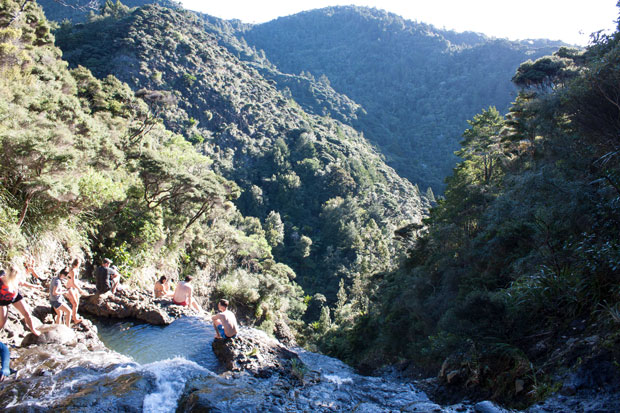 This spot is the perfect place to enjoy the sunshine and spectacular views and a great place to stop for a well-earned bite to eat. I highly recommend the Kitekite track for any Auckland newbies or for anyone who enjoys walking tranquil coastal tracks.

That Sugar Film – HD Trailer from Metro International on Vimeo.

I’m a late convert to granola and late to come across That Sugar Film. That Sugar Film follows healthy-eating Australian documentary maker Damon Gameau who set out to eat the average sugar intake of an Aussie adult, without resorting to naughty foods such as ice cream and chocolate. He then assessed how his body reacted (deteriorated) and at what speed.

That meant he went from eating no sugar (except that found in fruit) to 40 teaspoons a day. Yes, 40 teaspoons A DAY. My mouth hung open the whole way through. He stuffed himself into liver disease and 12 extra kilograms of weight in just a few weeks.

You’d think eating 40 tsp of sugar (1 tsp = 4g) would be difficult but as the movie shows, it’s very, scarily easy. There are lots of sugary foods, but packaged cereals were one of the big surprises for me. They are chock-full of sugar, and sneaky with it because no-one eats the recommended serving. Even ‘healthy’ ones have a lot of sugar. That made homemade granola pretty attractive. However, it also requires going to the bulk bin and carefully measuring out a whole heap of nuts and seeds. After showering the floor of Countdown in front of a fellow shopper, who looked quite stricken on my behalf, I went for the bulk bin of raw mixed nuts (walnuts, brazils, peanuts, cashews, hazels, almonds). Another option would have been the same nut selection pre-mixed with dried fruit. But dried fruit is sugar-coated and has little of the real goodness of actual fruit. And it sticks to my teeth. So no.

More stories you might like:
Lisa Scott... goes tramping on Naumann Range and lives to tell the tale

This nut mix is expensive, but when you break it down into servings, cheaper than packaged granola, and far more healthy. I only manage about a third of a cup with yoghurt. METHOD
Heat the oven to 180˚C. Cover a large oven tray with baking paper. Put nuts in the blender or chop by hand. If you’re using a blender, do it a handful at a time and use ‘pulse’ or as I discovered, your blender may stop forever, and it also turns the nuts in the bottom into a powder.

Tip the chopped nuts into a bowl and mix in the salt and cinnamon. In a cup, mix the water, oil, sugar and cinnamon, then pour into the nut mix and stir through until it is coated. Tip the mix out onto the tray and spread out until it’s even. Bake for 30-40 minutes, stirring and turning over every 10 minutes. Remove from the oven when the granola is a deep golden brown. Cool, then store in a sealed container.

Nadene’s tips
The first time I made this, I baked it for a total of 40 minutes. The second time I forgot it was in the oven after the 30 minute stir and left it until almost the 50 minute mark. That burnt a little bit of the mix around the edges and some of the hazelnuts (which I removed) but definitely improved the overall depth of flavour.

If you want to get a bit fancier with your granola, check out this link on how to make the granola of your dreams, a really useful tool for mixing things up.