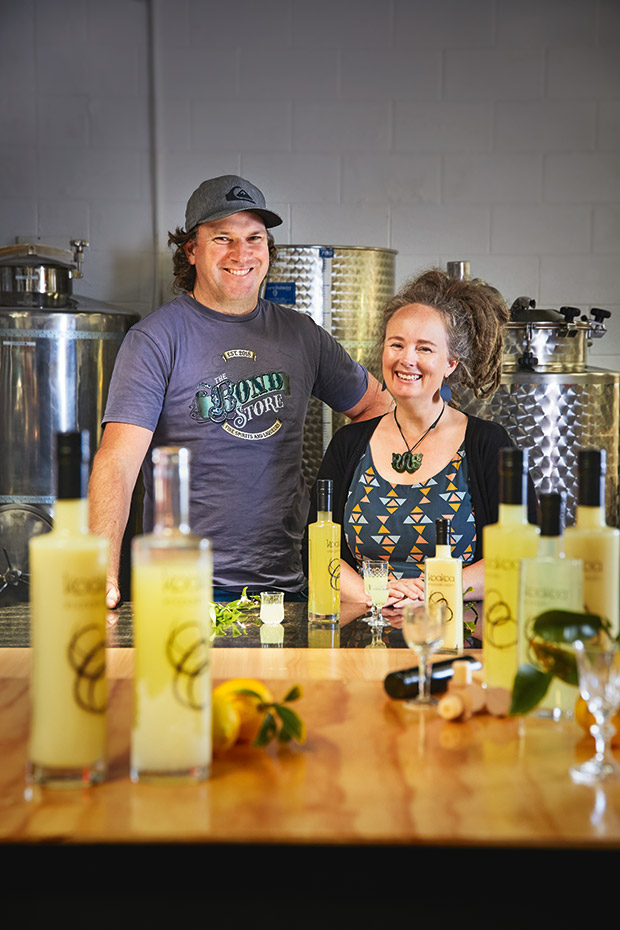 A quick read of the compliments taped to a wall at Koakoa’s Paraparaumu factory is a pick-me-up when Bec Kay, the company’s sole limoncello maker, needs it most.

As for everyone, 2020 was a trying year for Bec and her husband Chris Barber as they worked through lockdown, operating at all hours to produce hand sanitizer in bulk, alongside their usual — drinkable — alcohol-based products. While the frenetic pace of those months has eased somewhat, Bec smiles when she thinks about the effect those compliments continue to have.

“We had all these people sending us lovely emails, so we thought, ‘Actually, we’re going to print these out and put them up.’ We were tired and feeling a bit over it, to be honest, then these emails popped up, and they’re so nice. It was lovely to hear from the people purchasing our limoncello and gin. Some were even buying gifts for their neighbours or even the whole street.” 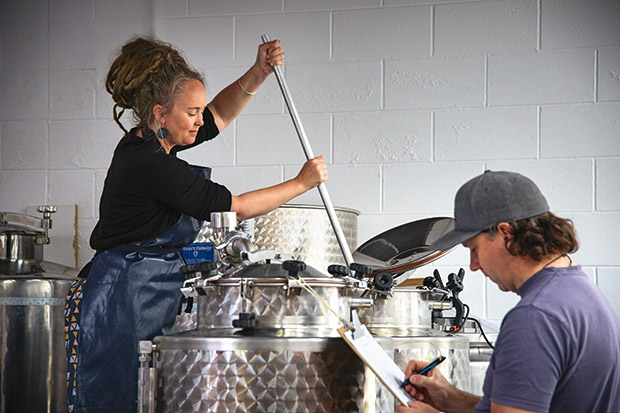 Bec makes all Koakoa’s products — its limoncello, limoncello cream, orangecello, and honeycello. “Ironically, while Bec doesn’t cook, she knows how to make alcohol really, really well,” says Chris, who primarily handles the business side of the brand.

It’s not something Bec would have thought of doing less than a handful of years ago. As a nurse in charge of co-ordinating Hutt and Wellington hospitals’ operating and trauma theatres, she spent an hour in the car each way commuting from Kāpiti. Chris drove the other way to Levin, where he worked as a consultant revitalizing businesses.

Wanting to do something a bit different, and work locally, Chris started looking for a Kāpiti business that could do with a nudge to “go a bit harder”. In early 2018, a tip led him to Koast Limoncello.

“They had been making limoncello for about 10 years at that time, having started in a local Italian restaurant. I had a bit of tour, then a chat with the bank and to Bec and decided to buy it.” It was a leap of faith made wider by the fact Chris and Bec hadn’t yet tasted the product. “We had been to the Kāpiti Food Fair to taste it, but we got there late, and the limoncello had sold out. We thought that was a good sign,” says Chris. Soon, Bec gave up her day job, tired both of the traveling and coming home to find Chris and daughter Ruby (12) having fun at the beach.

More stories you might like:
Nic and Kelly Watt talk about finding balance and why New Zealand is home

Now the beach is part of her commute, and she can sink her toes in the sand as she strolls up to Paraparaumu from their home in Raumati.  Since the couple took over, the recipes haven’t changed (based on “why change something when it’s clearly working”), but a lot else has, including the company’s name. Koakoa means happy in te reo, and the added Aotearoa flavour was deliberate.

“Limoncello is usually all about the Amalfi Coast and its massive lemons. But our lemons — Lisbon and Yen Ben — are small and come from Gisborne, and we’re stoked with them. We don’t need to pretend to be Italian — we just happen to make a product that has an Italian name,” says Chri 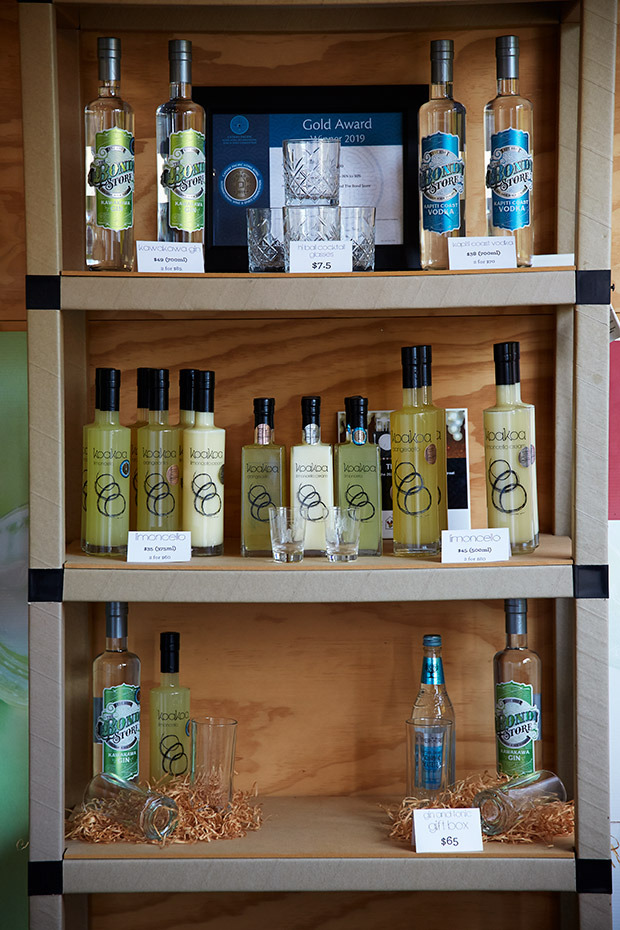 Only six months after taking over, Bec and Chris sent their limoncello off to the SIP Awards in the United States. “We entered the biggest awards we could find because we wanted to benchmark ourselves against the big boys — the Italians,” says Bec. “We weren’t limoncello connoisseurs then, although we are now, so that was our way of working out if our product was good.”

It was — the limoncello won double gold. The pair followed up with entries in a London competition, where it won outstanding silver. “Chris was gutted not to get gold, but eventually we found out ours was the most highly awarded limoncello, so we were happy,” says Bec.

They’re also happy that everything is made onsite, with all ingredients sourced from New Zealand and waste is kept minimal. The base alcohol is made in Reporoa from whey; the lemon pulp (from as much as 5000 kilogrammes of lemons a year) is snapped up by local chutney and jam makers; and most bars — and locals — return bottles for reuse.

Although the bottles come France, as the company just can’t find the right bottle in New Zealand, the Koakoa brand — with its stylized lemon peel spiral — is printed on the glass by a small business in Auckland. Bec and Chris are keen to work with other small businesses as much as they can. They also work with local people, including a legion of friends who volunteer their peeling skills to denude those 5000 kilogrammes of lemons of their zesty peel. “Yes, all by hand,” says Bec. “Through the winter, when lemons are in season, we all sit around the table with potato peelers.”

More stories you might like:
This slice of Far North paradise is purpose-built for the Owen family to thrive

“It’s fully automated as long as you keep moving your arm,” jokes Chris, fiddling with a peeler, which has — as its only concession to comfort — a slightly padded handle.

“We quickly discovered our friends are very competitive, so we started a leaderboard,” says Bec. “At the end of the peeling season, we have two trophies — one for the quantity of peel, and the other for quality, because you need good-quality peel to make good limoncello.”

It’s more fun than it perhaps sounds as the friends keep coming back, which frees up Bec to get on with making and bottling limoncello, her vodka or the deliciously spiced, incredibly smooth kawakawa gin sold under the Bond Store brand.

“Maybe they’re partly here because we had to conduct a lot of tastings with our various gin recipes, but we couldn’t do this without those volunteers. We say the business is just us, but it’s not just us — there are a whole pile of people who look after us,” says Bec. These include two other shareholders who help make business decisions and — importantly for a couple who work and live together — offer a different perspective and alternative ideas.

It’s working for them: Chris says Koakoa has grown 200 per cent in each of the past two years and is on track to do the same in the 2020/21 year — a year that’s brought unexpected challenges, of course, but also collaborative opportunities, including the use of their limoncello by Preston’s butchery in a chicken sausage for the New Zealand Sausage Competition.

“We’ve created a great base and done all the right things, so the most important thing for this year — whatever it brings — is that we’re ready to respond. We’re lucky because of our customers, but we have a really good product with a great brand, and we price it the right way,” says Chris. 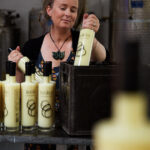 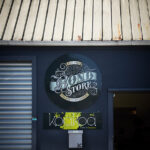 It also helps that Koakoa’s drinks are fun and versatile, and Chris and Bec are determined to get Kiwis thinking about limoncello and orangecello as more than a digestif served over ice.

“Use orangecello in margaritas or other cocktails or slip some limoncello in prosecco. Add some to a gin and tonic, or gingerbeer, like a moscow mule,” suggests Chris.

“One Wellington bar uses our limoncello in a drink with doris plums [recipe below], which the Italians would never do. The idea behind the meaning of Koakoa is that we want people to have fun and shake things up.” No cocktail shaker necessarily required.

Koakoa’s limoncello is made from lemon peel (or orange for the orangecello), alcohol, water (or milk for the cream limoncello), and sugar (or mānuka honey for the honeycello).

The hand-peeled skin is bagged then submerged in whey-based alcohol and left in the tank. “It usually takes two to three months for the alcohol to take on the citrus oils,” says Bec. “If the skins have become hard, and the alcohol smells lemony, the oil is out.”

The 95 per cent-proof lemony alcohol then sits in holding tanks for Bec to syphon off according to demand, dilute with ultra-filtered water, add sugar, stir, then bottle. 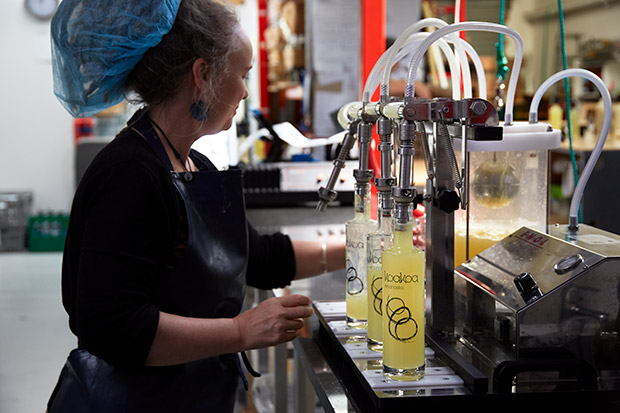 Koakoa’s limoncello isn’t heated, and there are no added flavours or colours. “As a natural product, year-by-year our batches are slightly different because of the difference in the fruit oils. I try not to let the tanks get too low so I can blend to minimize variation,” says Bec.

Using a four-headed filler, Bec can complete up to 300 bottles a day. She brings in a helper to meet a particularly big order. But output is always limited by the filling.

“My horror is not being able to meet an order and disappointing people, but so far we have kept up with demand,” she says. The result is a bright zesty drink that begs for a frosty glass and a sunny day — or a tumbler and a cold night.

“There are a couple of little trade secrets in the process, but primarily it’s the lemon singing the song,” says Chris. koakoa.nz 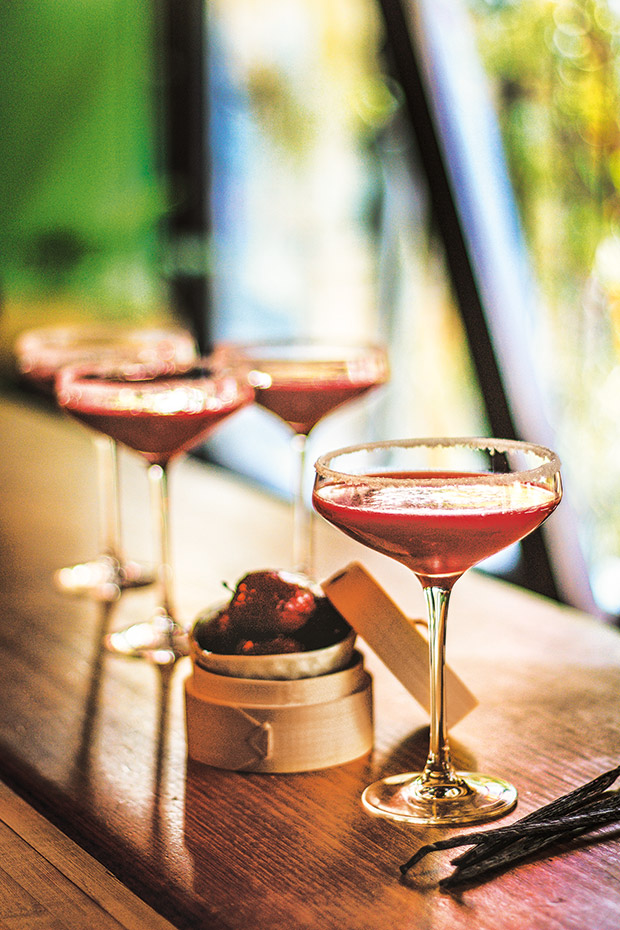 More than 35,000 of these cocktails have been sold at Wellington’s Dragonfly restaurant since it opened in 2012.

Run the lemon wedge around the rim of a martini glass and then rim with caster sugar.

In a boston shaker, add vanilla vodka, limoncello and the purée. Top with ice and shake thoroughly.

Strain into the martini glass.

What is water kefir? Forage & Ferment has brewed up the probiotic-rich (and award-winning) drink