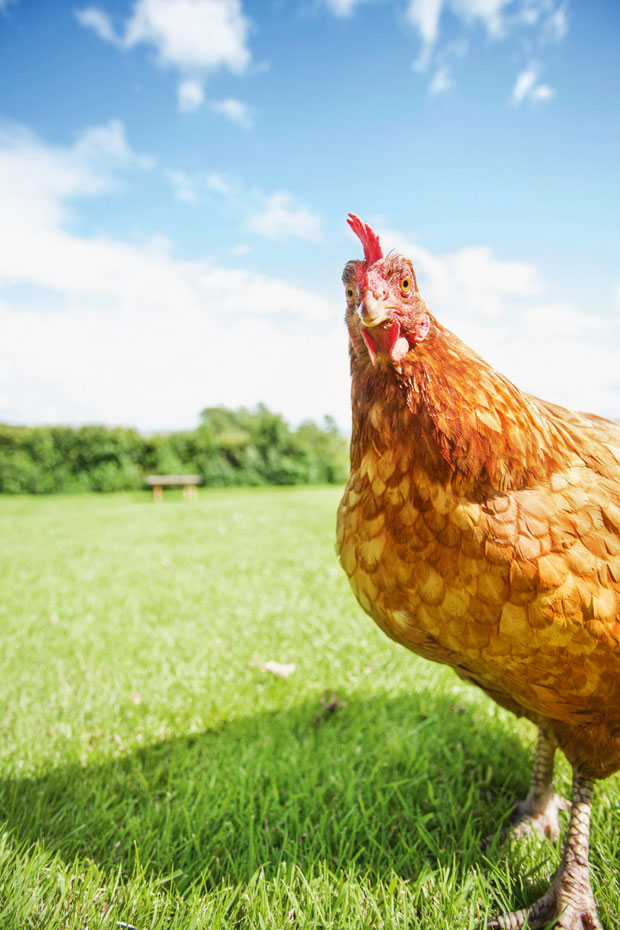 How to create a nutritious mixed salad and creepy-crawly entrée that will improve the health of your chickens.

Poultry and pasture do each other good. Research shows poultry can improve pasture by scratching and mixing organic matter into soil (including their manure), controlling insects and pests such as mice, and eating weeds.

Joel Salatin is a world-famous chemical-free, self-named ‘lunatic’ farmer who has grown meat birds on pasture for over 40 years. He’s found he can feed 30% less processed poultry feed (compared to industrial-based poultry farmers) by adding pasture to his flock’s diet, so long as:

• it’s a mix of native grasses, broadleaf weeds, clover, chicory, oats, and rye;
• the habitat is rich in insects and grubs;
• plants are at the right height. 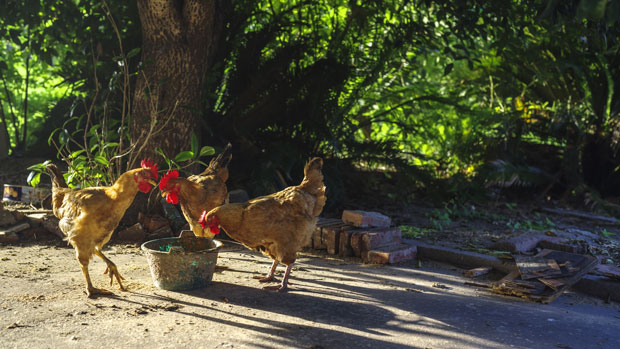 Salatin describes the best pasture as ‘not too tall and not too tough’. That means foliage up to 10cm high, but ideally about 5cm. He grazes cattle first, then as pasture starts to regrow, he follows up with poultry.

Mature grass is lower in nutrients, as the plant then puts its energy into seed production. Grass that’s too long also causes practical problems:

• it reduces airflow around portable coops, causing them to heat up on
a hot day;
• it provides cover for predators;
• it gets trampled by birds instead of eaten, their manure forms a ‘mat’ so it becomes inedible, and birds get dirty.

WHY SOME PLANTS ARE MORE NUTRITIOUS FOR POULTRY

Basic pasture plants such as ryegrass aren’t high in nutrients that are important to poultry. Poultry requires high protein feed (15-20% depending on age, breed), which they break down into amino acids. Two of the most important are methionine (abbreviated to MET) and lysine. 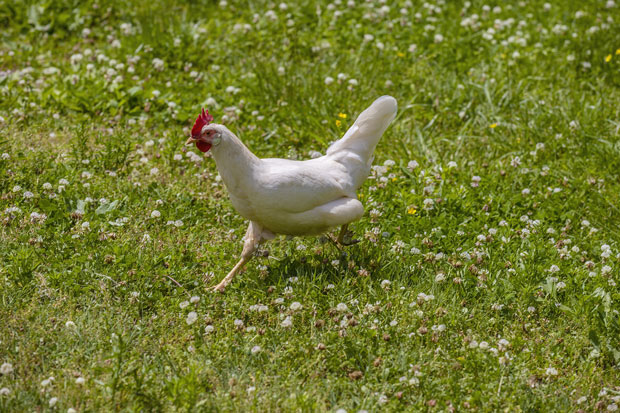 Birds deficient in methionine will start feather pecking at their flock mates. If birds draw blood, they can peck the victim to death.

Research shows tall fescue, red, and white clover have higher MET levels in summer than in autumn and could provide almost all the MET an adult bird needs if growth conditions are perfect.  Chicory is another good source of MET but needs to be grown in ideal conditions to get good quality leaves.

Poultry love comfrey and will destroy plants if allowed free access, so it’s best to harvest it and feed it out. 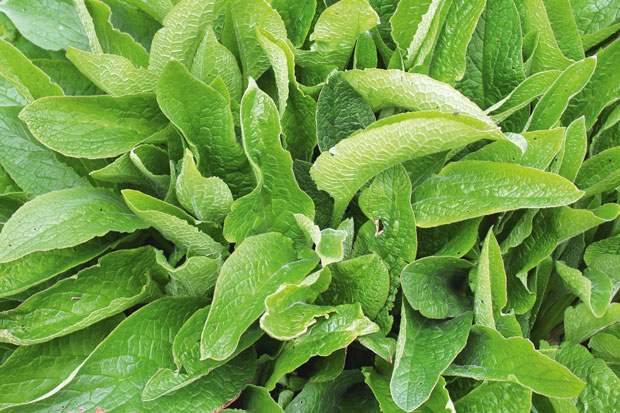 Comfrey is difficult to control. Any root remnants (which can reach up to 3m deep) left behind after it’s dug out can resprout. Look for varieties that sellers say don’t self-seed, which is often a variety (or hybrid) of Russian comfrey called ‘Bocking 14’.

High, daily, long-term intake of comfrey can cause liver damage in livestock and humans. It’s best planted in a protected area (such as an orchard), fed out in small amounts (up to 8% of the diet), preferably dried for better protein levels.

Chickweed’s name is the clue to its two most common attributes: feeding chickens and birds (which love it) and being considered a weed in most countries. 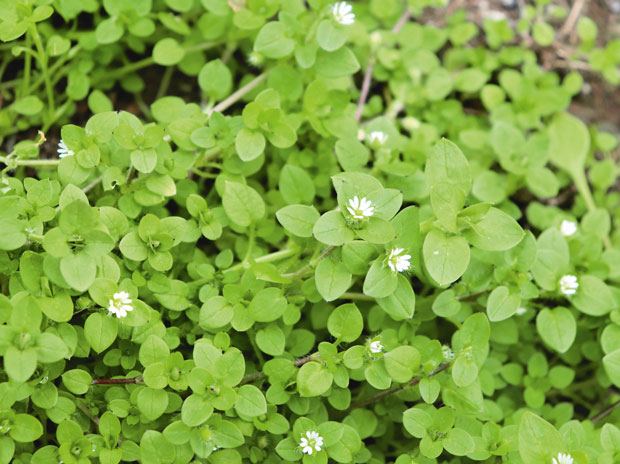 It tends to smother the soil where it grows, which makes it a useful groundcover under trees. It’s real power is that each plant can produce anywhere from 600-15,000 seeds (mostly in spring and autumn) and they’ll germinate after 40+ years of dormancy. That’s why it’s weedy, but the good news is poultry can freely graze it.

The leaves are high in magnesium, calcium, and iron, and the tiny seeds are very nutritious (17.8% protein, 5.9% fat). The flowers also provide feed for bees and other pollinators.

Lucerne is used in NZ to feed cattle, sheep, and horses. It’s drought-tolerant, fixes nitrogen, and increases organic matter in the soil. 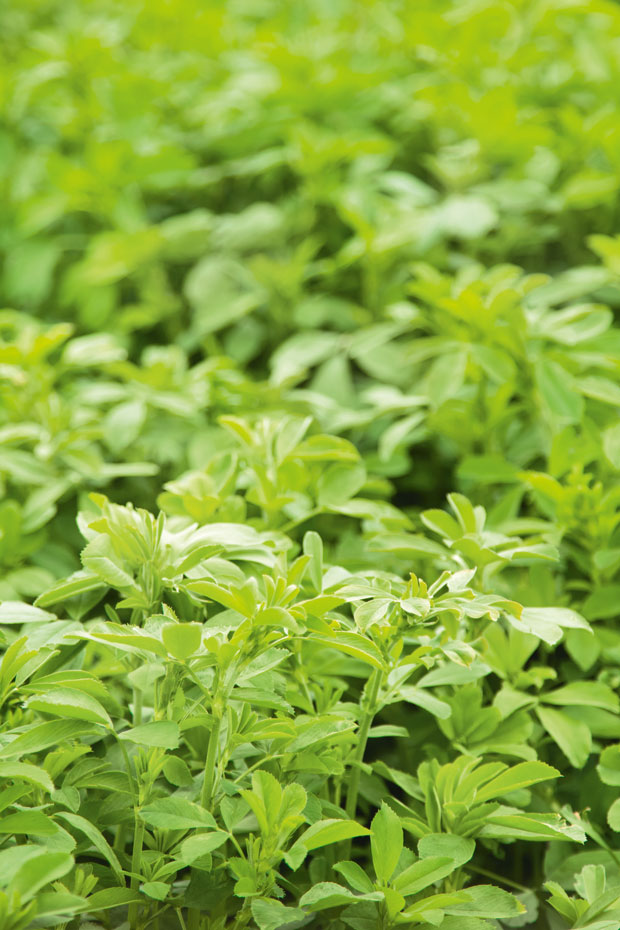 Poultry can also eat fresh lucerne foliage. It’s at its most nutritious just before it flowers, as buds are forming. However, to turn it into a more nutritious, high-protein feed, it needs to be cut at this stage, chopped finely, and then ensiled (turned into silage) or dried.

Processed lucerne shouldn’t make up a large part of the poultry diet, as above 5-10%, it can have a detrimental effect on bird growth. Lucerne also greatly increases the insect life in its habitat. US university entomologists looking to collect a wide variety of insects always start in fields of alfalfa.

Chicory is a high-quality feed for all livestock, especially during dry summers, when the feed value of grass and clover tends to fall. 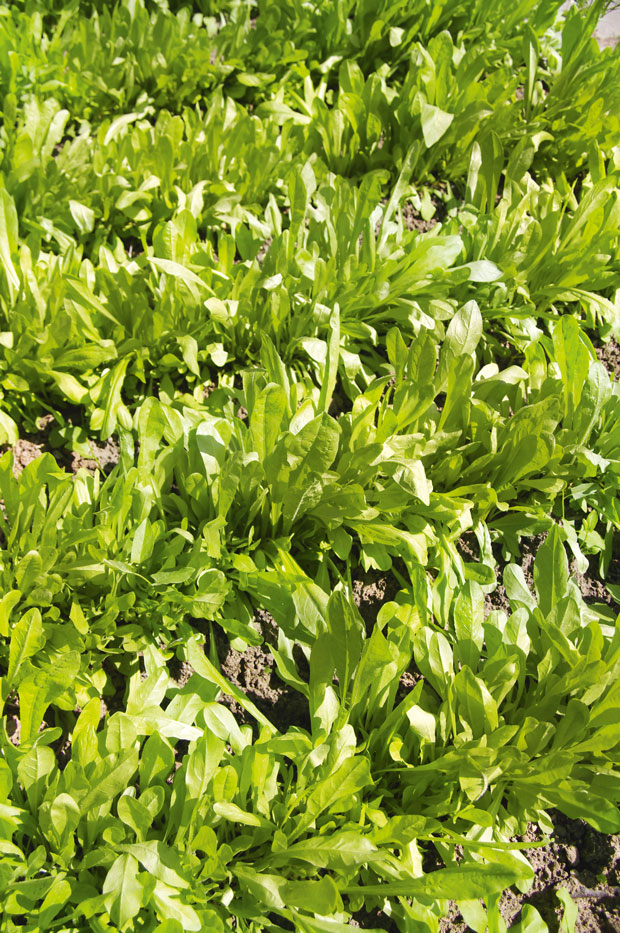 Research on poultry has found it’s nutritionally superior to ryegrass, clover, and other mixed herbs. It helps to maintain egg production and body weight, and produces significantly darker yolks than other greens.

Hens prefer it to most other greens, completely eating it out of the trial areas used during the research. A study conducted on young broiler (meat) chickens showed adding 60-120g/kg of chicory forage was beneficial for their gastrointestinal system.

NZ is renowned for its high-quality clover varieties, giving us a wide choice of options for most climates and soil types. 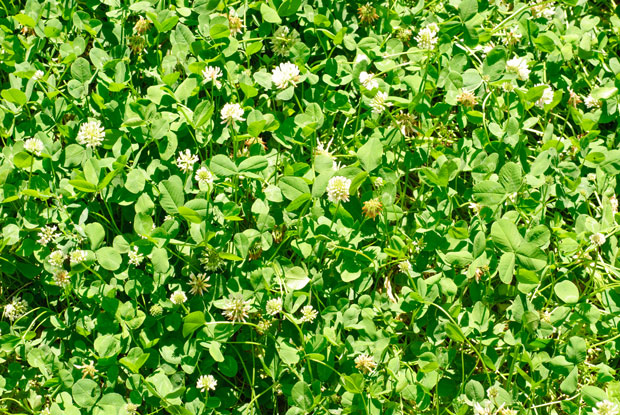 It also fixes nitrogen in soil. Research shows poultry grazing on clover (with access to a nutritionally balanced feed) had higher bodyweights.

However, the study found it should only be a small part of the diet (up to 7.5%). During dry periods, red clover can be high in phytoestrogens, inhibiting bird growth and reproduction.

WHY YOU & YOUR POULTRY NEED SEA BUCKTHORN

Sea buckthorn is probably the most nutritious plant you can feed to your poultry.

In NZ, they reach 3-6cm in height (they can get a lot higher overseas), but it’s best to prune them to 2.5m for harvesting and to allow sunlight into the centre. 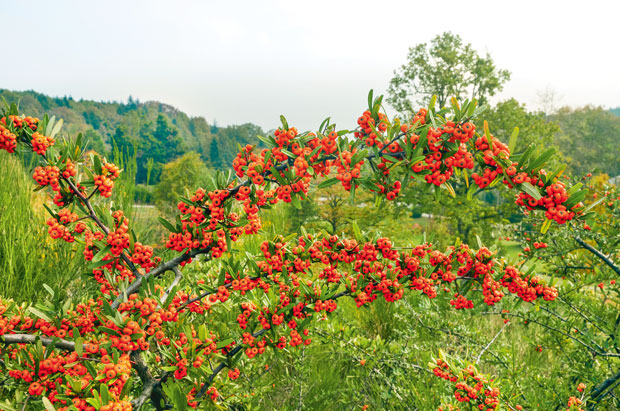 Sea buckthorn produces one of the most nutritious and vitamin-rich fruits found in the plant kingdom. It’s a hardy, deciduous, shrub-like tree, with silver-grey foliage. Planted closely together (3-7 young plants per metre), it forms a dense hedge that only needs a little trimming in late winter.

There are a few drawbacks. The stems have sharp thorns, it grows quickly, and it has an extensive suckering root system, so it can be a nuisance in the wrong place. However, the roots are excellent for binding sandy soil, fix nitrogen, and prevent soil erosion.

You need a mix of male and female plants. In the US, commercial growers recommend one male to seven females to ensure pollination. To get both, you need to buy plants that have been propagated from cuttings or wait 3-5 years to identify plants by their flowers. 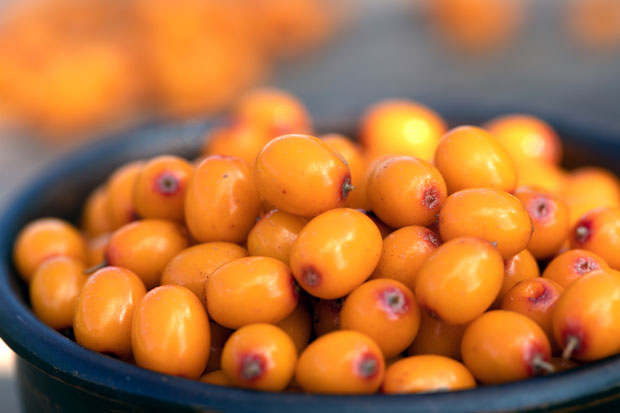 Research in the last few years has shown the berries and leaves to be highly nutritious for poultry and people:

Powdered berries have an immune-protective effect against mycotoxicosis (toxic fungi that grow in feed). One study fed processed berries to 1440 commercial poultry hens, divided into 30 groups. Berries were pressed to remove the juice, dried, powdered, and used to replace 5% of their diet. Over the following year, the birds eating the dried berries laid more eggs, with significantly darker yolks.

HOW TO HARVEST SEA BUCKTHORN

There are two problems with harvesting sea buckthorn: the thorns, and the berries which are small and don’t naturally ‘detach’ from the branches. UK author and forager John Wright describes them as “rubber balloons of bright orange liquid attached to a barbed wire fence.” 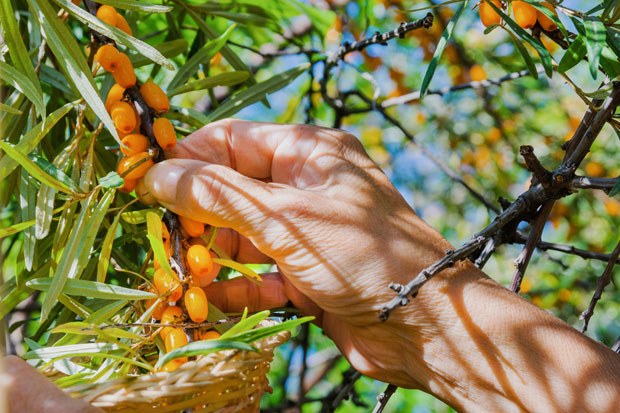 Options include:
• place a plastic sheet underneath, then shake the tree; or,
• use sharp secateurs to snip off branches.
• hold branches over a bowl and carefully squish the berries to get the juice out (foragers recommend doing this outside as the juice will stain), or;
• freeze branches, then pick the frozen berries.

The sour juice is cooked with sugar to make dessert fillings, syrup, sauces, jam, juice, wine, ice cream, and to flavour spirits. You can also use the leaves to make tea.

A special kind of woodchip is great for tree growth, and your chickens can make it even better. Ramial woodchips provide the best conditions for the growth of soil fungi, which help to create an airy, spongey soil that is more fertile, holds water, and resists compaction.

‘Ramial’ is a forestry term referring to the chopped remains of small to medium-sized branches of certain trees (7cm diameter or less). The smaller the branches, the less bark and heartwood, and the higher the wood’s nutrient levels. 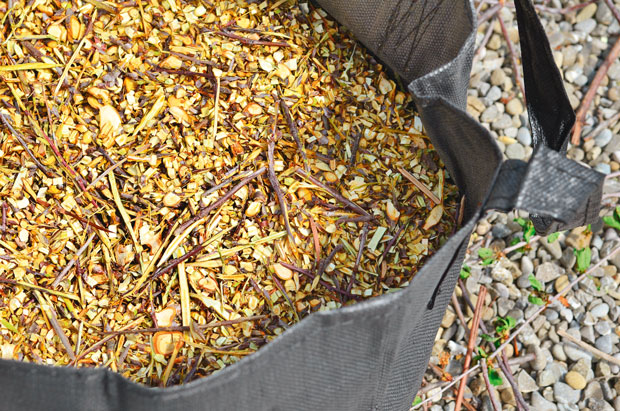 The best trees to use are deciduous or alive, but dormant at the time of cutting. Good options include willow, poplar, and alder. The best chip size is 1-2cm thick and 2-10cm long; some leaves mixed in with it is fine. Ideally, the woodchips are composted for several months, until you see fungi (white threads) growing through it. Use as mulch around trees or mix into the soil in vegetable beds.

A trial by a US organic orchardist found fresh ramial woodchips and blood meal tilled into the top layer of soil around newly planted trees gave them the best growth. It also increase organic matter in the soil.

How your chickens can help: place a deep layer of ramial woodchips into the bottom of your coop. Sprinkle daily with feed, and add kitchen scraps. Your flock will turn it over, helping it to compost, and adding nitrogen via their manure.

Worms are good for the soil, and highly nutritious. Earthworms are an excellent feed for poultry. They are highly palatable, high in protein, fat, and minerals, and rich in the two amino acids critical to poultry health (methionine and lysine), higher than meat or fishmeal.

Studies have found earthworm meal (worms dried at 120°C for one hour) is even more nutritious than feeding fresh ones. In one study, broiler (meat) chicks were fed crushed maize, earthworm meal, and a vitamin supplement for eight weeks. 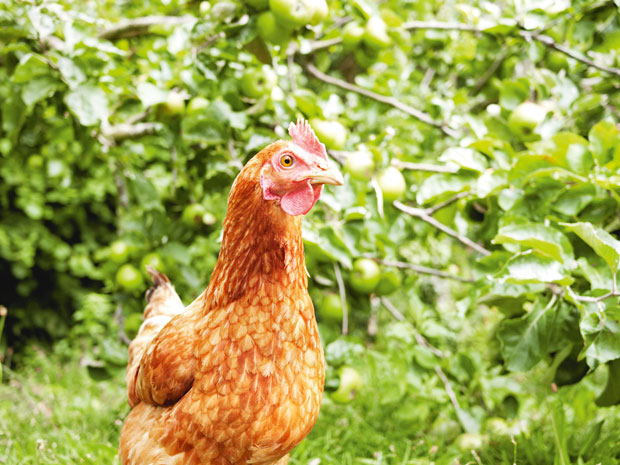 Their growth was compared with a control flock fed a standard commercial diet. There was no significant difference in growth rates between the two groups, indicating the earthworm meal was a good protein option.

In another study, researchers found meat birds eating earthworm meal (as 3% of their diet) ate less but had the same growth rate as birds eating a commercial feed. Their weight was slightly higher after 42 days, they had better gut microbiota, and improved meat quality.

The two earthworms easiest to find and grow are:
• Lumbricus rubellus, the common red worm you see in the top 5cm of garden soil, and in compost;
• Eisenia foetida, the stripey ‘tiger worms’ used in vermicomposting systems.

Grow one of the nicest flies in the world, and harvest almost perfect poultry protein. Black soldier flies (Hermetia illucens, BSF) don’t like people and prefer to live outside, instead of buzzing around your house. Their larvae can be raised in bins, similar to a vermicompost system. 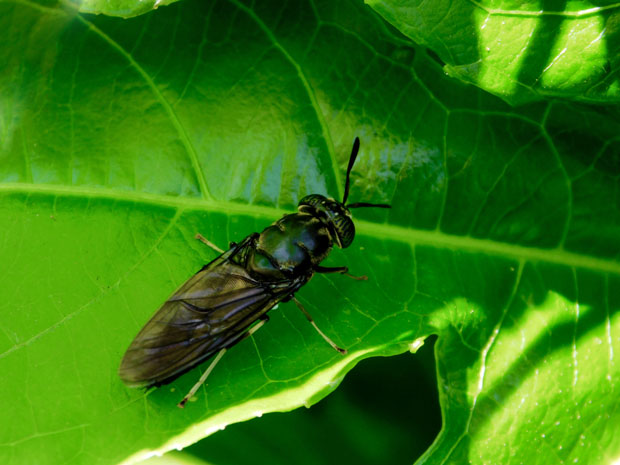 They eat enormous amounts of food, including meat and other kitchen scraps, garden waste, fresh manure of any kind, and roadkill, reducing its volume by 50-60%. They don’t produce methane, and their greenhouse gas emissions are 47 times lower than ordinary compost.

If you include poultry manure in their diet, the larvae significantly reduce its levels of E. coli and Salmonella enterica. At a certain point in their growth, larvae enter what’s called a ‘wandering’ stage.

If you create the right habitat, they’ll helpfully self-harvest into a bucket. You can buy or make bins that are attractive to adult flies, host the larvae, and allow them to self-harvest. 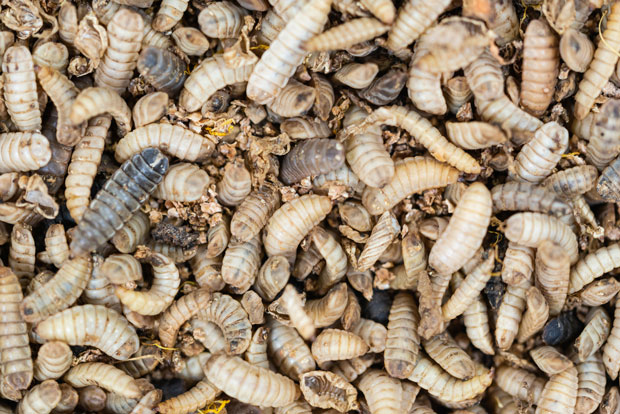 There are lots of DIY guides online on how to make a bin, or you can buy a BSF BioPod online (from overseas).

Once harvested, they can be fed live, or chopped up, dried or ground, and stored. Black soldier flies are common in the North Island, often sitting on the outside of windows. They can also be bred inside a tunnel house in regions with cold winters.

How to feed your poultry at every life stage

Confessions of a Chookaholic, Part Two: When your chicken feed is overindulgent