Are Muscovy ducks the perfect pet? Meet the big duck with no quack 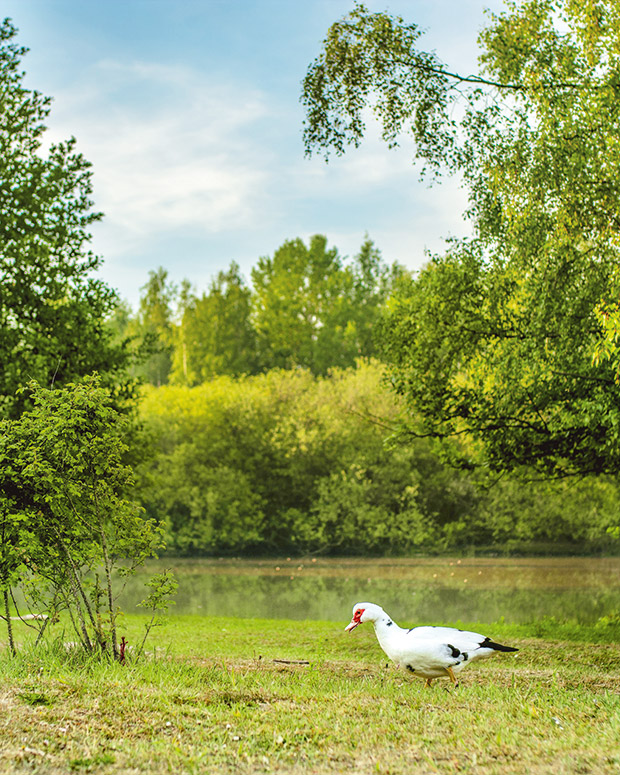 Domesticated ducks quack quite loudly and can’t fly. Muscovy ducks can fly and don’t quack. Technically, while they look like a duck, a gander at their genetics shows the Muscovy is a type of waterfowl that’s distinctly different from all other ducks. They’re close enough that they can interbreed with them, but any offspring are always sterile.

Casey Patten runs Harrisville Heritage Poultry on her block, 50km south of Auckland. She loves the variety of colours of her flock, but it’s their personalities that first caught her heart.

“They’ve got really great characters. You go out to feed them and they come up and gather at your feet, hissing, bobbing their heads, and wagging their tails.”

She has 10 birds, eight ducks and two drakes. Even with a small flock, it’s enough to produce a wide range of colours, one reason people love to keep Muscovies.

“The babies are always interesting when they pop out. I have black and white ones and blue and white ones. I get the occasional – I’m not sure of the correct terminology – lavender and white, and the odd ones with some barring (stripes down their front). I also have one bronze girl out there, which is a combination of chocolate and blue I think, so there’s a whole range of colours.” 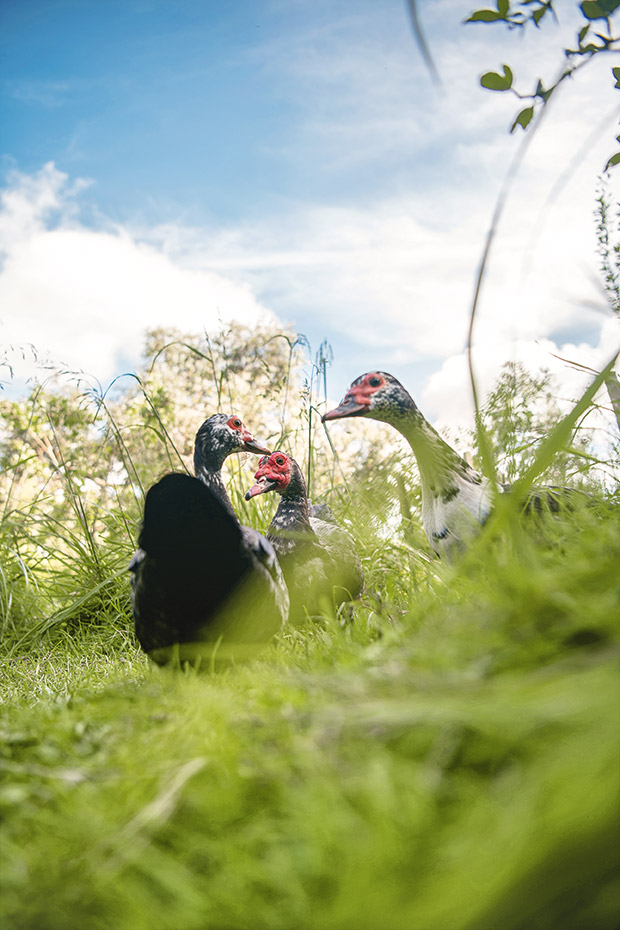 Casey mostly breeds birds to sell as pets. They’re popular because they’re so quiet, especially compared to the other duck breed she sells, the Pekin. “Now those girls quack quite loudly!”

The Muscovies are much bigger than standard domestic ducks, especially the drakes which can be 30-50% larger than the females. “They’re very popular as meat birds in some cultures,” says Casey. “I have a combination of customers (meat and pets), but I couldn’t breed enough Muscovies for the people who would like them for meat.”

She’s found the ducks are good layers, and mostly good mothers. “They don’t lay an egg a day for ages like chickens, they do tend to have a break here and there. Mine will lay a clutch, sometimes as many as 12-15 eggs, then they want to go broody. They’re pretty good mothers, although I have one that’s really crap at it, so I guess not everyone’s cut out for it.”

The incubation period is another Muscovy quirk, significantly longer than other similar birds. “It’s 21 days for a chicken, 28 days for a mallard-based duck like a Pekin (and geese), and it’s 35 days for a Muscovy,” says Casey. “Funny how it’s multiples of seven.”

More stories you might like:
Why the Red Devon is a smart cattle breed for beginners and lifestyle block owners 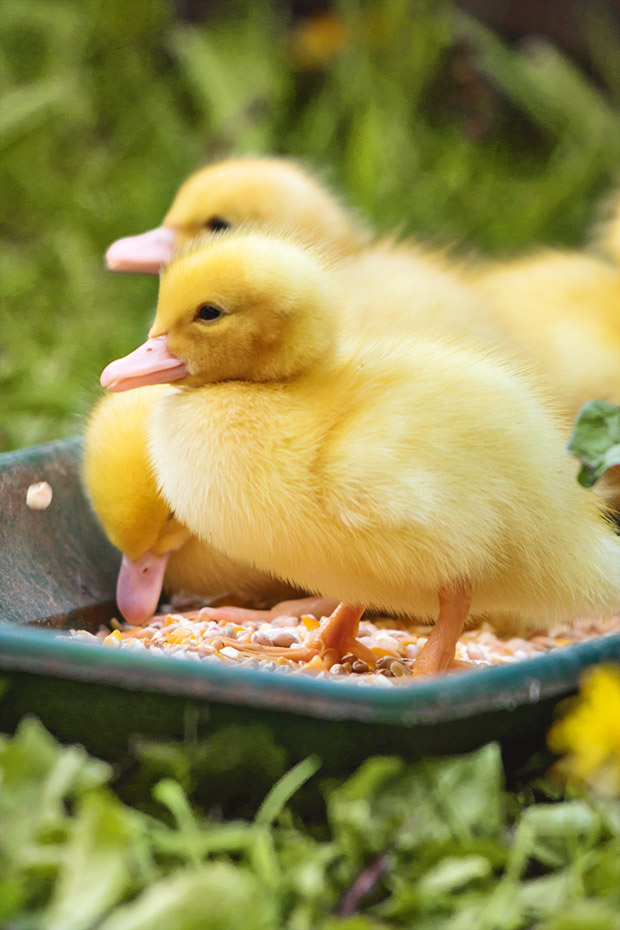 Muscovies are odd in other ways. Unlike other ducks, they like to perch, so they’ll happily settle in a coop or on tree branches to sleep using long sharp claws on their feet to help them grip. As a result, handling them requires some care, and thick gloves, especially if you need to pick up a male who is likely to kick out.

Casey does eat their eggs, which are slightly larger than chicken eggs. “They’re awesome for baking, for meringues and sponges that require air to be whipped into the whites. They’re really good in quiches – I use them half and half with chicken eggs in quiches.”

She doesn’t eat them fried, poached, or boiled on their own. “I don’t like the texture, they tend to be quite rubbery, but then I have had people who enjoy that texture and buy the ducks for that reason.” 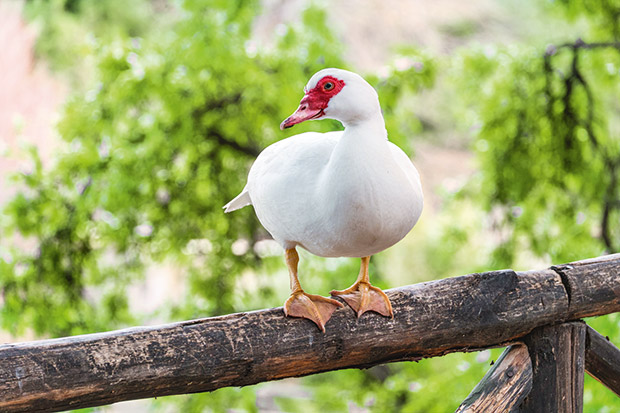 Research into wild Muscovies in public parks in the US found they spent about 12% of the time in open water, swimming, foraging, and bathing. Shorelines (13%) were used for roosting at night and for resting/comfort, foraging, and other activities during the day. Grass (42%) and tree cover (18%) were important habitats for foraging, while shrubs (8%) and urban habitats (7%) were mostly used for resting and comfort activities.

5 THINGS TO KNOW ABOUT MUSCOVY DUCKS

1. Muscovies do well on a low protein poultry feed. They’re also excellent at cleaning up waste food and fruit windfalls. It’s best to feed a small quantity of pellets during the morning, then leave them to forage. If they’re still hungry later in the day, feed extra pellets.

2. Like geese, a big part of their diet is pasture – they’re a great choice to keep orchard grass low thanks to a slightly curved beak. They’ll also do some pest control (see below).

3. While they do like to swim, Muscovies are happy if all they have is a paddling pool of fresh water.

4. They’re very hardy, tolerating hot daytime temperatures, but also do quite well in really cold climates, even as far north as Alaska.

5. In the US, Muscovies are considered a pest in waterways and parks. In NZ, they’re rarely seen in the wild and are mostly kept as pets.

HOW TO TELL THE BOYS FROM THE GIRLS

Male and female Muscovies are easy to tell apart. This male (far right) has more caruncles than the female beside him. The bright red fleshy ‘masks’ on their faces indicate high testosterone and good health to females, making the male more attractive.

Adult males are also much larger than females, 4-7kg vs 2.5-3kg. It’s hard to tell when they’re newly-hatched ducklings, but males quickly start to overtake the females in size. While both develop face masks, the caruncles become larger and more prominent more quickly on males. 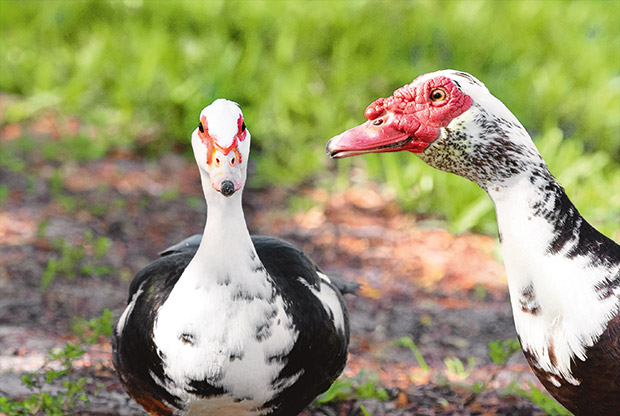 If you’re still not sure, listen in on a conversation. Muscovies are renowned for being the quietest ducks, with males making just a hoarse hiss similar to a goose. Females have a more pleasant, softer quacky-like sound, but it’s a whisper compared to the loud barking-like quack of other duck breeds.

“They’re very quiet, especially compared to our Pekins,” says Casey. “That’s why people love to have them as pets, as they hardly make any noise so you can have neighbours quite close and not disturb them.”

4 REASONS TO EAT MUSCOVIES (AND 2 REASONS NOT TO)

Muscovy meat is a popular meal in many Asian countries and France. Casey Patten says she gets at least one call a week from people looking for ducks for meat. “I don’t breed them for meat, but if I did, I could breed three times as many as I do (each year) and still not have enough.”

Muscovy meat is quite dark, tender, and has a depth of flavour some people compare to veal or sirloin. It’s also very lean, so while the ducks don’t grow as fast and aren’t as easy to manage as the most popular duck meat breed (the Pekin), it’s still farmed overseas as a healthy meat option.

The breast meat on a 13-week-old male fed a good diet can be around 700g. But that’s much slower than a well-fed Pekin which is ready to eat in just 8 weeks. Another disadvantage is that males and females need to be raised separately, as the males eat more and are more aggressive in a mixed group. 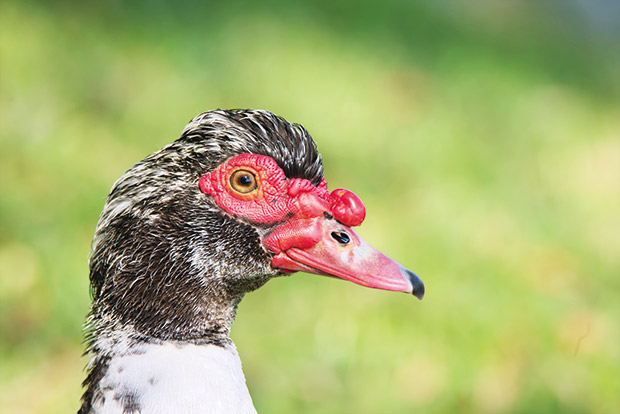 If duck fans online could offer you one crucial piece of advice when it comes to cooking Muscovy, it would be don’t roast it. Most duck breeds carry a thick layer of fat on their bodies. There’s so much, it often spatters the inside of ovens. Normally, it’s a good idea to prick a duck’s skin before roasting it, and then repeat it multiple times during cooking to allow the fat to run out.

Chefs also recommend sitting a roast duck on a rack in a roasting dish or it ends up soaking in a big puddle of fat. Not so the Muscovy. Their very lean meat can easily end up looking and tasting like dry cardboard when roasted. Good cooking options are:

• sear boneless breast meat, then cook and serve rare or medium-rare;
• use legs and breast meat in a slow-cooked casserole;
• use bones/other parts to make stock.

In a 2009 NZ Lifestyle Block article, long-time Muscovy duck breeding champions Barry Lochead and Don McConchie recommended eating drakes aged over 16 weeks. By then, they no longer have pin feathers, little immature feather stubs that are difficult to remove. That makes plucking much easier, and the bird is large enough to feed 6-8 adults.

ARE MUSCOVIES THE ANSWER TO YOUR PEST PROBLEMS?

Muscovies like to eat grass, weeds, insects, slugs, and snails. But they will also run down, catch, and eat mice and baby rats. There are videos online of Muscovies tossing back mice like gulls eating fish.

Research shows they’re also good at controlling house flies. A field study by scientists housed one Muscovy per enclosed pen of young calves. The ducks reduced maggot populations by 98.7%, and fly populations by 84-93% compared to when the pens were duck-free. 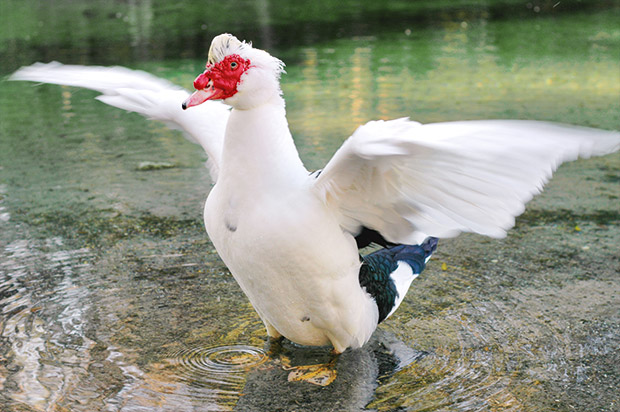 The ducks survived for more than 12 weeks in pens with calves without injury, and they worked fast. The scientists found it took a duck only 0.6 hours to remove 90% of the population of flies in a pen, compared to 15.3 hours for the most effective commercial device.

They ate an average of 25 house flies per 15-minute observation period. Females were the winners, consuming flies up to three times faster than males. The ducks cleaned up spilled and wet waste food, which kept fly numbers low, and helped the birds grow. A similar study with Muscovies in sow farrowing rooms found they reduced fly populations by 91%.

Are ducks the new chickens?