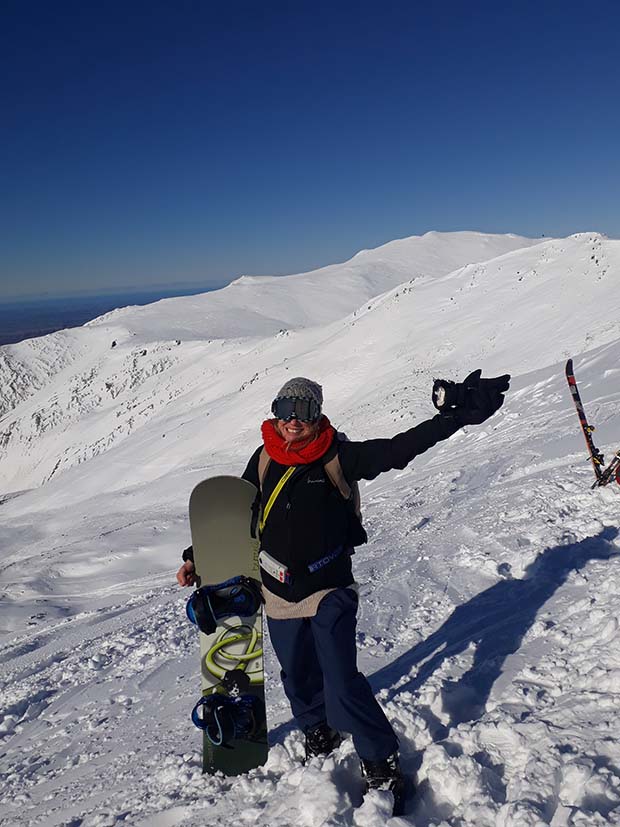 Lisa Scott’s first day of snowboarding at Awakino skifield in North Otago involved a helicopter and an avalanche. She lives to share the tale of her nerve-wracking adventure at this beautiful skiing location off the tourist trail.

It was my first time up a mountain, first time snowboarding and the bar was inadvertently set a little high when I got in the wrong helicopter. What can I tell you? Listening is not my strong point. Dropped, not at the Nissan Hut next to a freshly-groomed learners’ slope, but on the ridgeline at 1900 metres in area called Ice Cream (because it’s always soft and creamy). I sank knee-deep into fresh powder as one-by-one the pros shooshed past, flying fast down the face like fabulous birds, not end-over-end in a cartoon cartwheel. 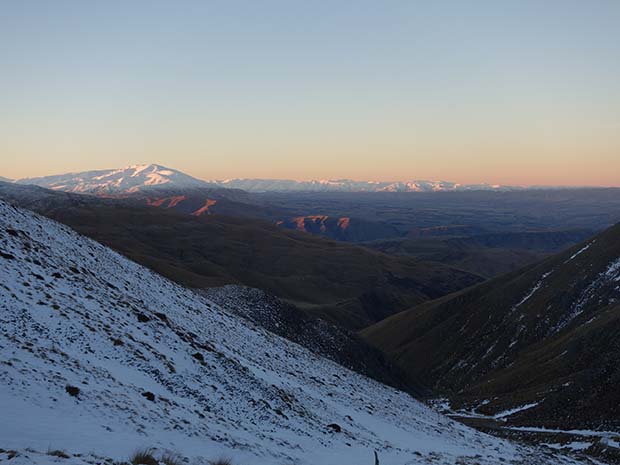 Dawn over the Kirkliston Range and Hakataramea Valley.

“Umm … I don’t actually know how to do my bindings up?” The wind kept catching my board, and I struggled to hold onto it. “This is my first time.”

“You mean you’ve NEVER done it before!?”

“No. But maybe I could walk down from here?” 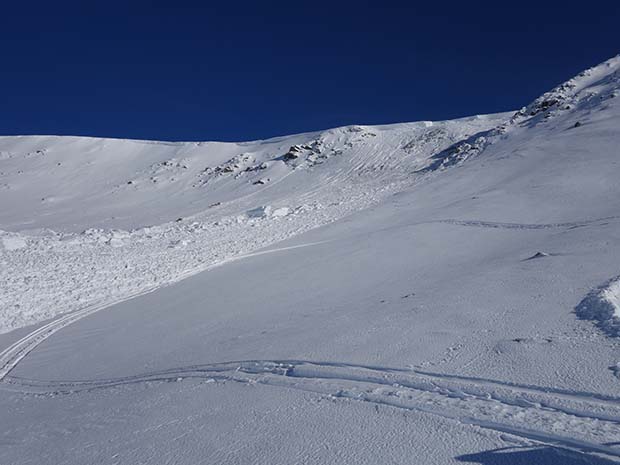 F@#*ing hell!” Nick already had more people signed up for a one-off heli-ski than he knew what to do with and now he had a daft blonde at the top of the mountain. He stopped swearing long enough to radio for the helicopter to return: “I’ve got a non-snowboarder up here…” We flew over old avalanche debris. Only later did I realise what I had seen: boulders which can easily crush and enough snow to suffocate. You’re not in Wanaka now, Dorothy. 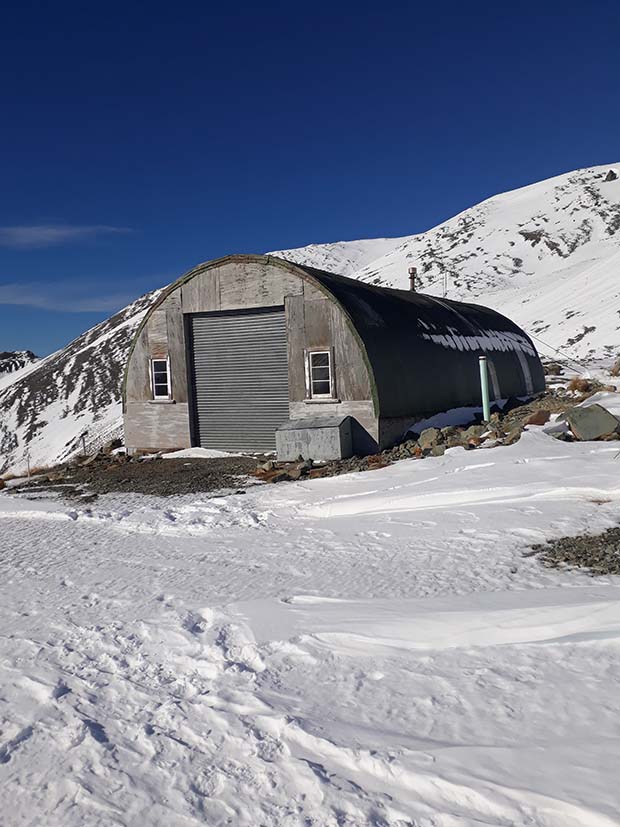 High in the St Mary Range near Kurow is a little ski field, bounded by the gullies and rock towers of Glacier Basin underneath Foster’s Peak. It is one of the smallest in New Zealand, less than an hour from Oamaru but 20 years away from the flash threads and endless queues of commercial fields. There’s no cellphone coverage at Awakino lodge, so the modern world can’t find you, every day is 1987, 1938 … things haven’t changed very much since the Waitaki Ski Club was formed between the two wars that would devastate the male population of the valley, leaving sonless mothers, widows, and oaks and crosses from Oamaru to Duntroon. 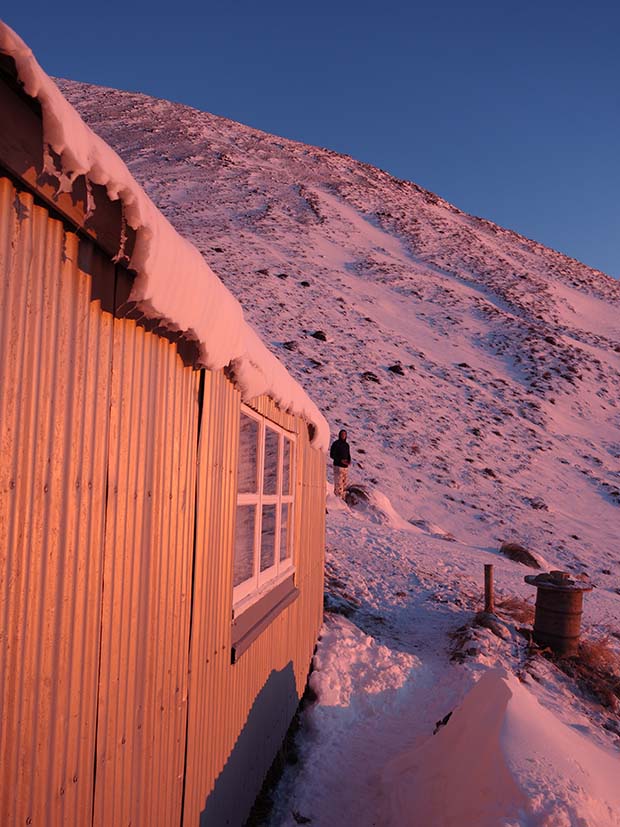 We had come up the road of the brave the night before under a sliver moon, the old water race Fluming Gully on our right, rushing cold over gold. Snow pavlova to the wing mirrors, we got as far as we could before leaving the Terrano. Terranos are very popular amongst the volunteers who run Awakino; I counted five – they have a low centre of gravity, always start and climb like nobody’s business. The steep, narrow road to the lodge calling for vehicular positioning worthy of the Castle: “I’ll have to get the keys to the Cortina if I’m going to move that Camira …”). 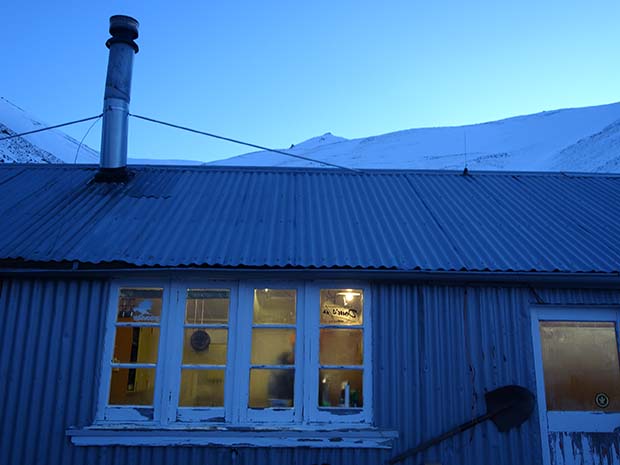 With the Terrano parked sideways in a snowbank we walked the rest of the way wearing head torches. The lodge was built in 1947, and is cobbled together like an old family bach. Vintage before vintage was invented… cupboard handles rubbed with love, particle board cubby holes, black-bottomed pots hung above the cooker, a broken clock, mum’s old curtains, a row of nubby red seats from the Regent Theatre stalls against one wall. Kodak snaps of bouff-haired blondes in candyfloss-pink onesies thumb-tacked above, faded to the universal blue of policeman’s shirts. 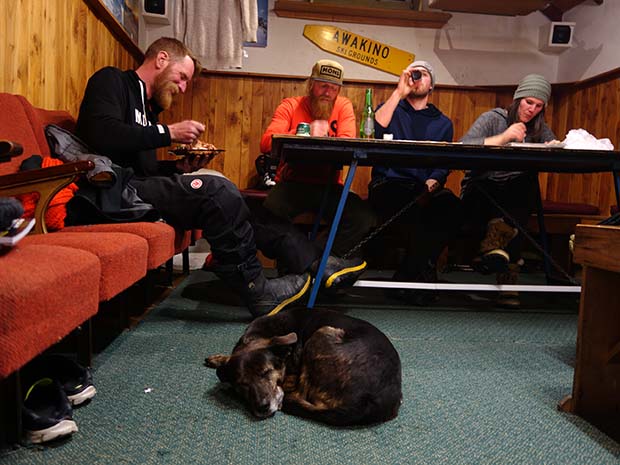 The first day of the season dawned frosty, thick ice frozen in swirls on the windows. Having arrived in darkness, I had no idea of the view from the deck. “Have you seen this?!” They had. Indulgent smiles met the sun coming up through the sawteeth of Kirkliston Range, warming the Waitaki and Hakataramea valleys.

The kitchen came alive with people and dogs, dancing around each other and the wood burner, piling Arcoroc plates high with massive breakfasts of fried eggs and toast and hash browns and bacon and chops and sausages because “There are no calories up the mountain.” My $6.99 waterproof pants from Save Mart sat easily amongst the Viking beards and flared salopettes with rainbow flashes. ‘Take us as we are,’ is the fashion here, the pretentious would be laughed off the slopes. 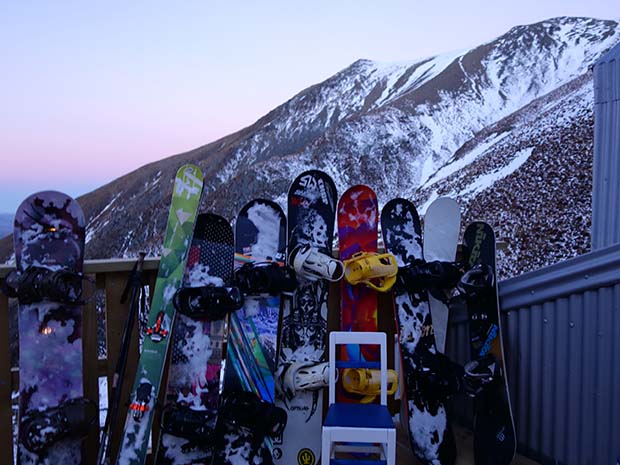 The Waitaki Ski Club was established in 1938. There is no financial membership available and the core group of twelve volunteers are, by necessity, handy with a 9/16th crescent. The smell of an oily rag would be luxury. “Things work, just not all at the same time.”

More stories you might like:
Explore New Zealand’s most extraordinary tree collection at the national arboretum, Eastwoodhill

A busy day is 25 people, “there might be a line at the tow” and a bit of digging required to get it running, temperamentally powered as it is by a 60-year-old blue Fordson tractor, Jack Parkes’ baby. The 79-year-old mechanic drives the dozer and regularly walks up the mountain with a backpack full of truck batteries, dressed in his cardi and fingerless gloves. Chris Tschepp wrangles the groomer, one of the first to be imported into NZ. He’s been coming here since he was five, his dad’s ashes are scattered on the mountain, the poem on a plaque affixed to a boulder commemorating his love for the place written by the same apoplectic volunteer Nick Guyan I met up at Ice Cream. 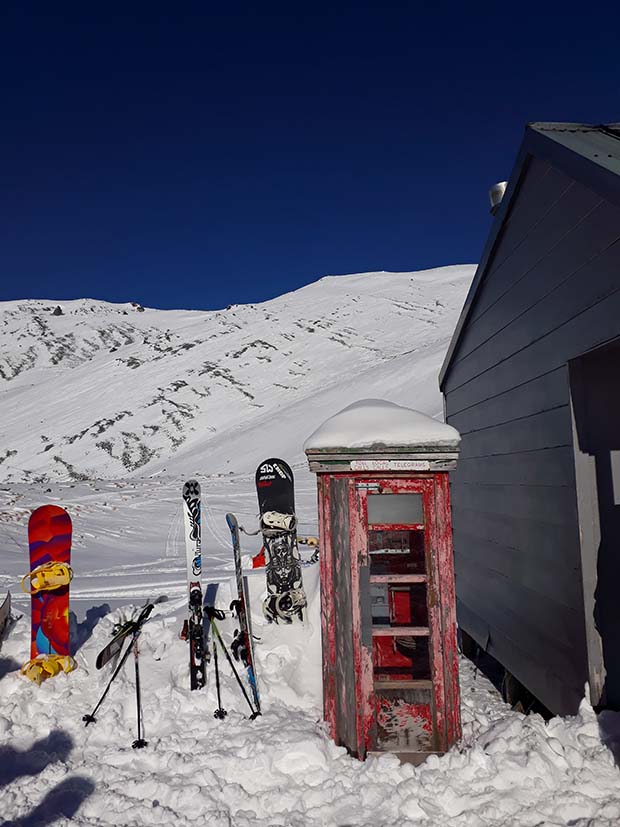 A peeling red telephone box is a reminder this field once boasted the highest exchange in the world, but I don’t want to call home and instead walk back to the lodge following the tussocks – they show how deep the snow is – the wind-exposed rocks which are the only sign a road even exists. When the sun goes down so does my internal thermostat: wearing five jackets and three pairs of pants I look like Kenny from South Park. Powder hounds lend me gloves, a scarf, a hat, until, a lost property box come to life and I finally warm up. 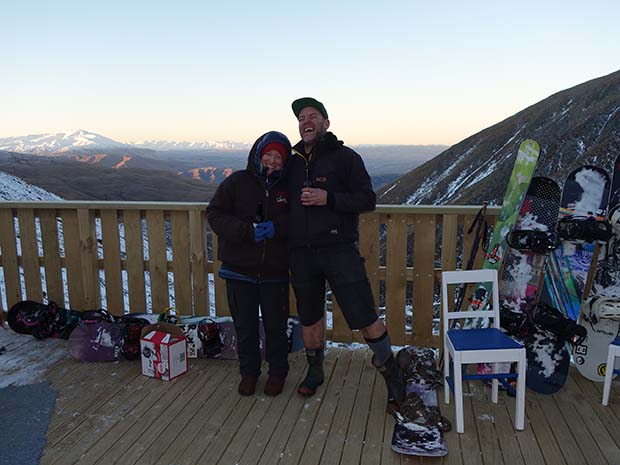 Après slopes, drink is taken as the Waitaki’s blue five-o’clock shadow fades to black. Kindness abides at altitude. Only the hardest of hearts would fail to be moved, the rest of me is too stuffed. Sore arms, sore bum, sore legs, I’m not the only one: a young man sharing the communal table falls asleep over his dinner, softly swaying while still sitting upright.

A travel story is usually about a destination visited only once, yet I have returned to Awakino. The mountain calls you back. My snowboarding improves, slowly. I’ve mastered stopping, and one day soon I might even manage a turn, but there’s no need to get ahead of myself. 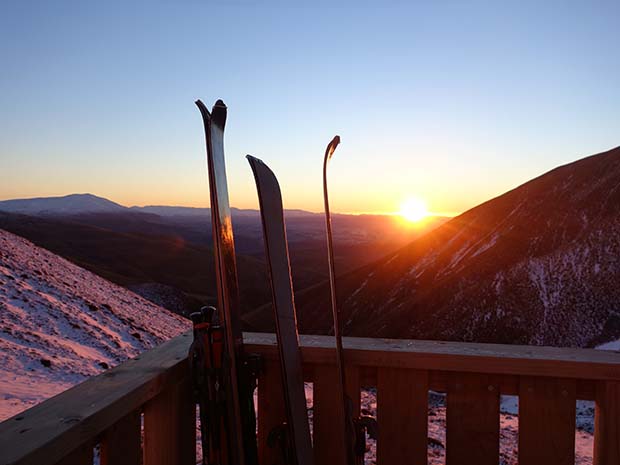 NOTE BOOK
Heli-skiing is not always available at Awakino but enquire on the website to see if flights are on offer.

How to get there: take State highway 82 or 83 to Kurow, Ferguson or Wynyard Street to Manse Road, turn right onto Cattle Valley Road, turn left on Awakino Skifield Road. Follow the road through farmland where it passes deer fences and crosses the Awakino river. You are now on private property; please leave gates as you find them. Cross a ford, pass an old grader and you’ll be at the lower carpark, 2WDs stop here. The lodge is another 2ks at 1100 metres. 4WD vehicles may need chains in winter. If this is your first time, let them know your ETA when booking, and some nice person might even come down the road and pick you up.
Accommodation: $33 a night for the lodge, rope tow $55 adult $30 children
The season is May to November, depending on snow
Get in touch:
PO Box 191
Oamaru
Facebook: Friends of Awakino ski Area
www.skiawakino.com

Sustainable sewing in a solar-powered campervan