Organic Jersey Girl milk  is available in a vending machine.

Lots of producers dream of growing certified organic food but the reality of cost, paperwork and effort can be off-putting which is why the new CEO of BioGro wants you to know he’s trying to make it easier every day. Organic farming in NZ is still very small: it covers just 1.1% of total farmland, versus Australia (2.9%), Austria (19%) and Sweden (15.7%). Source: NZ Organic Market Report (2012), Organics Aotearoa New Zealand.

If organic practices were used on all the world’s 4,883,697,000ha of farmland at a conservative rate of sequestering (2 tonnes/ha/yr), around 20% of global greenhouse gas emissions would be safely kept in the soil and out of the atmosphere. Source: IFOAM (International Federation of Organic Agriculture Movements). 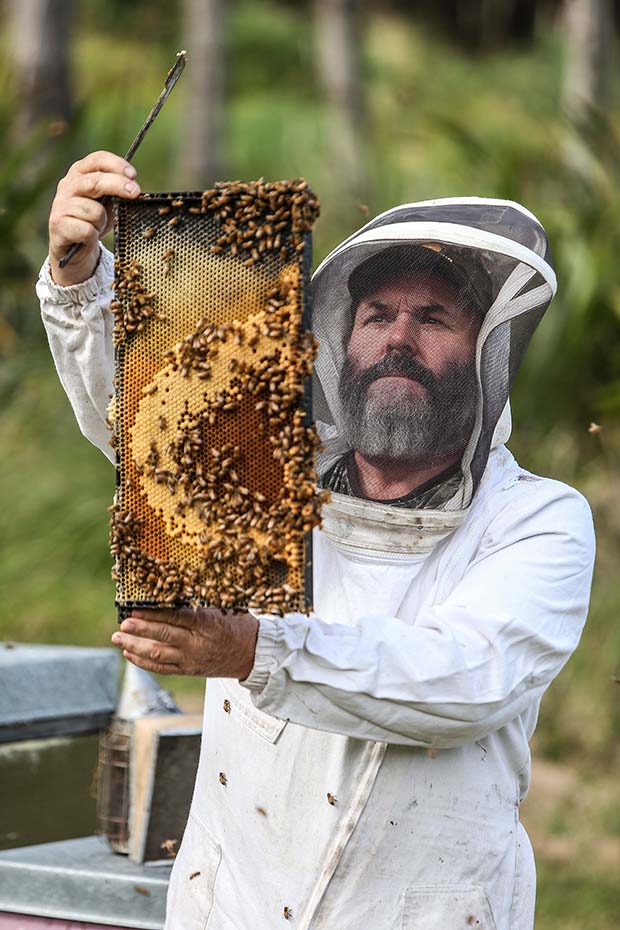 86% of New Zealanders believe organic products are good for them and their families, and 71% believe it’s good for the world. Source: Better Business Better Future Report, Colmar Brunton (2014).

More than half of consumers are prepared to pay more for food and other products that are certified organic. Source: Better Business Better Future Report, Colmar Brunton (2014) 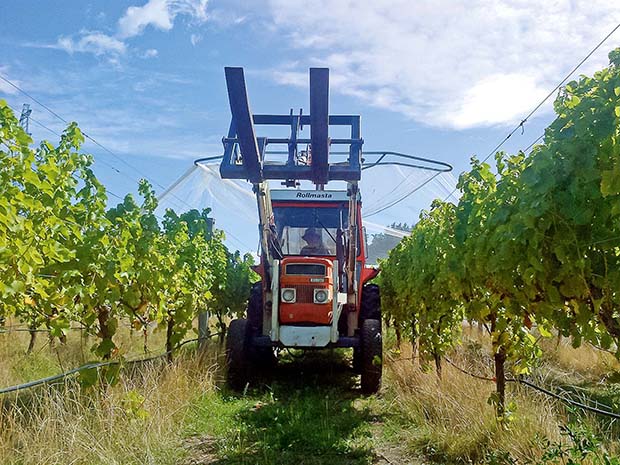 ORGANIC TO THE CORE

If you ask people to describe what an organic farmer looks like, you’d probably still get this kind of stereotype: bearded, 50-something hippy dressed like it’s 1979.

But the reality is organics is big business and the farmers who take on organic certification are choosing a profitable model, although that’s often not the main reason behind their choice – check out profiles of three soon-to-be certified growers on pages 18-24 who definitely don’t fit the stereotype. Changing that picture in the head of consumers and importantly farmers considering changing from a chemical based system to organic is one of the goals of Donald Nordeng, the new CEO of organic certifier BioGro which oversees more than 600 certified organic producers in NZ.

“People have a very negative view. When people – and not just in NZ but people around the world – hear the word ‘organic’ a lot of times they have an image of the kind of person who farms or buys organic food and it doesn’t match with who they think they are or who they identify as. There’s a gap in perception and I’d like to change this perception.”

US-born Donald has spent the last 20 years based in Japan, working for organic food and certification companies and helping to pioneer the development of organics in Japan. Coming to New Zealand to run BioGro might seem an unusual step but Donald says for him it was the opportunity of a lifetime.

“BioGro is one of the oldest certifiers in the world for organic so put those two things together, to be able to be CEO and of one of the oldest and most reputable certifiers and it was a chance I couldn’t pass up.”
Since his arrival in January, Donald has been travelling around the country meeting BioGro’s certified organic farmers, and working on ways to make the certification process a more user-friendly experience for them.
Part of the perception problem for organic producers is that ‘conventional’ farmers can often look down on the concept and dismiss it as a valid farming option.

“Everything is about what you learned when you were 25 years old and what was there when people were learning to farm isn’t organic. A lot of people doing organic 25 years ago were not conventional thinking people, but there’s all kinds of people out there now and at the end of the day, organic can be much more profitable and these days it’s also more accessible to a conventionally-minded person, it’s more business-like… there are big businesses doing organic farming here.”

1 There’s a new way to get help if you think organics might be for you
There’s a lot of jargon when it comes to national organic certification programmes: standards, transition, conversion, validation, verification, accreditation, and it can be overwhelming to the would-be organic farmer says Donald.

“It’s all this stuff that nobody cares about if you’re a farmer – for us it’s really important but for a farmer they really just want to get certified and sell their product. What I would like to do is make it really simple for people to understand what we do and what we expect and not get too much into technical jargon.”

BioGro now has a service for anyone considering going organic called the Initial Contact Meeting, a one-on-one experience on your block which looks at your unique situation.

“We send an auditor – it’s $150 which we credit back if you apply for certification – and it’s a one-and-a-half to two-hour meeting. The auditor comes to you, sits down and has a coffee and you talk about what you want to do, and they take a walk around and look at a few things with you.” 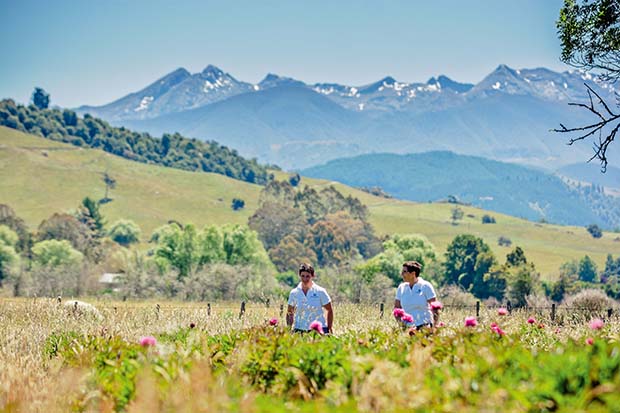 Dove Valley Peony farm is is nestled at the base of the Kajurangi Ranges west of Nelson. Growers Dot and Georgia do not have organic certification but have been growing organically for 18 months.

The idea is to give people considering certification a good idea of whether they are ready to start the three-year transition process, or whether there are things they need to work on first.
“It’s good for them and it’s good for us – we can help them at the front end. If somebody just starts along very earnest and very excited about being organically certified it can be really overwhelming.

“We’re trying to make organic certification itself more accessible to people like your readers, smaller farmers, more diverse kinds of people. We’ll be looking at using technology to make certification faster and simpler for people and also less expensive for the smaller growers who are just starting out or who want to become larger growers.” 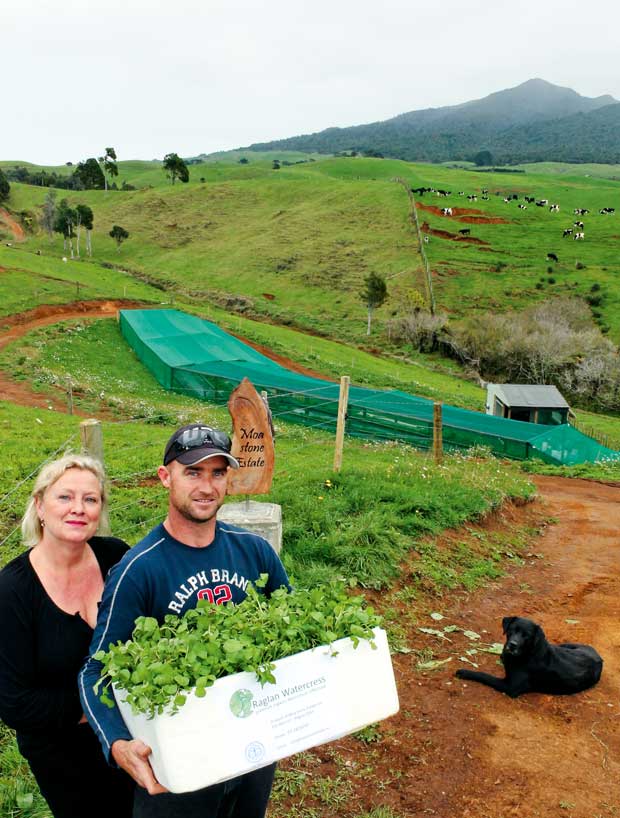 2 There is going to be new, money-saving ways to help with the paperwork
If you walk into the office of BioGrocertified animal remedy company HFS (Homeopathic Farm Support) in Hamilton, you’ll find owner Tineke Verkade has half an office dedicated to dozens of folders full of the paperwork she needs to maintain her business’s organic certification.
It’s a similar story for any organic certified business. Producers must keep proof of everything to do with inputs, from seeds and fertiliser to records of what they sell. Paperwork is a big part of the workload and BioGro wants to make it easier so it has worked to create a system that will put much of the information online.

“We have actually invested over $30,000 in an online organic management plan for growers that we’re in the final stages of testing and developing,” says Donald. “People will be able to use the online system to apply for the BioGro domestic standard so there’ll be an online operation plan that they fill out.”

“It’s like for any small business, you need your tax records so it’s similar except we’re looking at the flows of material through the farm, what we call inputs, all the material that goes in, seeds, fertilisers or anything they would use on the farm that are allowed in organic production.
“People don’t realise, when you’re buying something organic you can verify where it’s been grown, who grew it and what’s been used on it, there’s a lot of health and safety claims we can also validate with organic certification.” 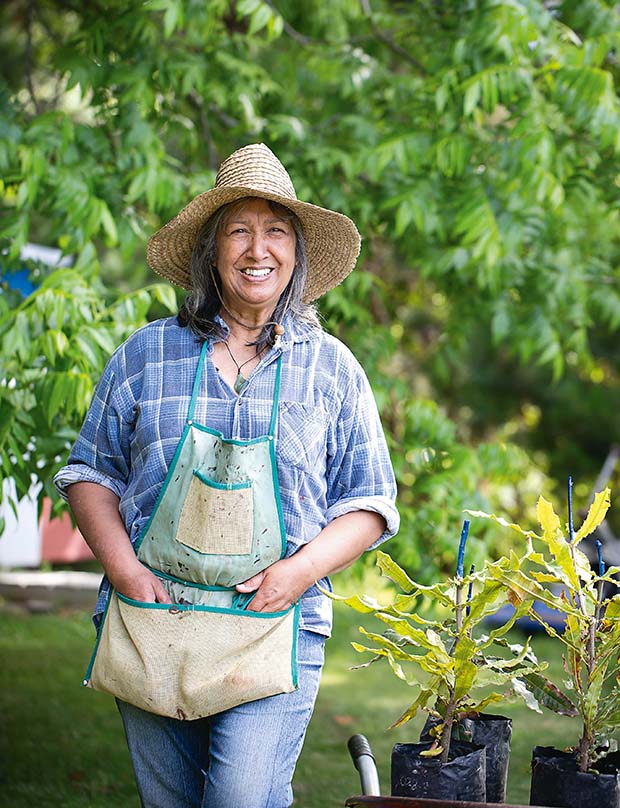 The system will also include BioGro’s evalutions of products that prove they weren’t produced with unapproved, nonorganic ingredients or GMOs (genetically modified organisms).

“The online systems will make it easier for customers to get into the system and use it, reducing their costs and our costs, and they can pass on some of those cost reductions to the customer.”

3 There will be technology to track sales too
The organic certification system looks at the volume of products a farmer sells, but it can be confusing to people new to organic who wonder why that aspect is so important. However, Donald says it’s an important check for certifiers like BioGro.
“It’s so that we can look at and trace how much they produce and how much they sell and we can know if it’s really organic or not.”

6 BioGro want to help farmers to sell more
BioGro is running its first marketing workshop for farmers, a day with an expert marketer looking at how to build a marketing plan, helping them to develop strategies, tactics, promotion, sales scripts and customer relations. It’s part of a long-term plan to help farmers – certified organic or not.
“One of the things we’re doing is creating a series of workshops about different topics, not certification itself but more about how to manage your farm or how to manage your paperwork or how to market your business so we can help people establish some of these systems so they can have a good running business. If they’re making their own jam and selling that at the farmers’ market or if they’re just selling fresh fruit and veges, it’s a business in a way, so if we can help them market it, help them market their products or help them to create a quality system so that they can manage things then I think it will make it easier for people to do that.”

What are the big organic money-makers?
Villa Maria, Zespri, Seeka, JB Apples (Organics), All Good Organics, Trilogy, Silver Fern Farms: all these NZ companies are making big money from organics.
Worldwide, organics lead some market segments. In North America, if you want to sell baby food, it must be organic.
“Baby food 10 years ago, 15 years ago was very minor,” says Donald Nordeng. “But now in North America, if you don’t sell organic baby food, no-one’s going to buy it; it’s like 85% of the market, and baby body care products like baby shampoo, organic is probably 50% of that market.”
Dairy products are also considered a poster child for organics, and Fonterra has now reinstated its premium price paid for organic milk, offering suppliers an extra $1.50/kg. There’s also a new cooperative of more than 30 organic milk farms – the Organic Dairy Hub – which will offer wholesale organic milk to local and overseas processors.

Does a cup of tea taste better with Jersey cow milk?

5 organic ways to weed without spraying

What is it like to be an organic beekeeper?