Behind Project De-Vine: How Chris Rowse’s vision to clear noxious vines spread beyond his block Chris Rowse expected to be greeted with sunshine when he and his wife moved to a lifestyle block in Golden Bay. He certainly hadn’t expected banana-passion vines silently slithering their way into his trees, robbing the canopy of sunlight.

“Some mid-sized trees were breaking down and trying to sprout back up with vines all over them. That’s when we realized how much of a nuisance it was.”

He also hadn’t expected that much like the vines, his weed-busting hobby would shoot out from his neighbourhood to all of Golden Bay. “It was a very organic process,” says Chris, the project director of the Project De-Vine Environmental Trust.

The charity works on a simple premise. The more properties cleared of noxious vines, the further birds and rodents have to travel to drop the seeds. Not wanting to be pulling vines into his 80s, Chris banded together with a few neighbours to combat their shared enemy. After two years of running a local weed-busting group, he and more than 20 submitters in Golden Bay successfully added banana-passion vine to the Regional Pest Management Strategy. “There’s nothing like success to make you feel more enthusiastic,” he says.

Success didn’t stop there. Under the advice of a QEII Trust representative, he applied for a three-year grant from DOC’s Biodiversity Fund. It was his first stab at grant writing — and he was victorious. Applications for larger grants were approved and, with resources to extend beyond the neighbourhood, Project De-Vine was born. Other pest vines, including old man’s beard and climbing asparagus, were added to the control list. 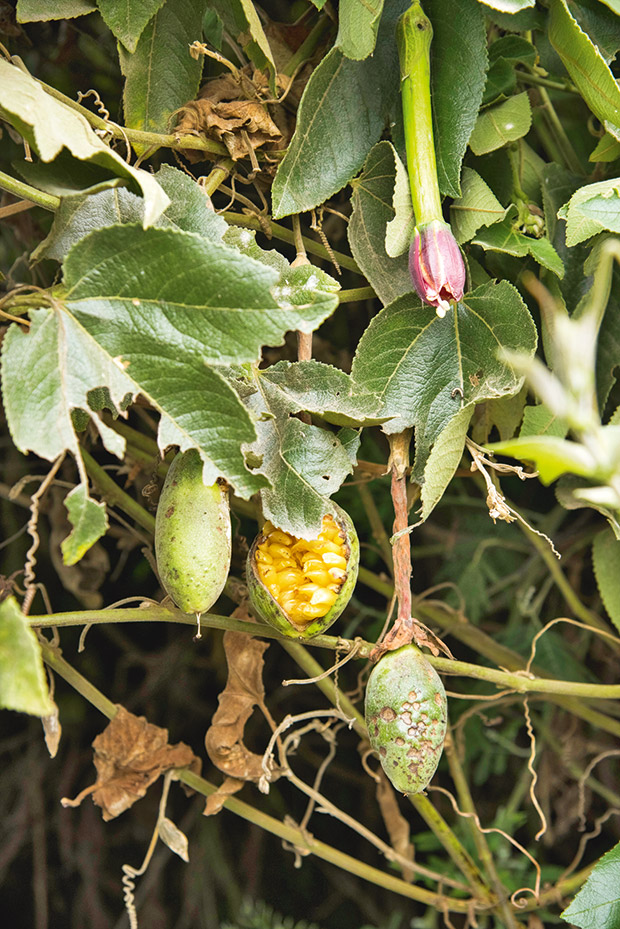 Dealing with pest plants requires vigilance. Project De-Vine assesses properties in Golden Bay before tackling them, using a four-phase reporting system to track their progress and determine if a property needs extra attention. Landowners are encouraged to be proactive with weeds — particularly if the plant is one of DOC’s “dirty dozen” most-wanted pests.

While far from finished, Chris is pleased with the improvement on his own block. He was tackling up to 400 banana-passion vine seedlings a year. These days, he may get 50 a year, a number that continues to decline.

It’s proof that there’s strength in numbers. Project De-Vine has since widened its impact by joining forces with government agencies and conservation groups. Now the charity is contracted to manage pest plant and tree species around rivers, reserves and national parks. “If you clear away the weeds, riparian plantings and regenerating forests will be far more successful,” he says. Between funded and contracted work, De-Vine’s vision extends from the northern tip of Kahurangi National Park to the “halo” around Abel Tasman National Park.

“Clearing these vines and other pest plants are the keys to successful eco-restoration. One landowner alone would get overwhelmed; it’s much more efficient when people and organizations come together.”

Banana-passion vines have thin stems and are fast-growing, so it’s easy to miss the early stages of an infestation. “If there are only a few vines, tackle them now and keep vigilant,” says Chris. Seeds can remain dormant for decades; landowners can slow down the cycle by preventing the vines from fruiting.

“There are always people who like the fruit but we encourage them to not leave the fruit on the vine or ground, otherwise, the seeds might be eaten and dispersed. I’ve discovered this is difficult — it’s far better to go without the fruit than to spread the vines to other properties and reserves.” pdvet.org.nz

500,000 pest plant and tree species killed manually
380,000 banana-passion vines killed
$1.69 million in grants
630 properties assessed
2026 year in which all of Golden Bay will be assessed if funding is successful

25 lessons from a long-time gardener