Best birthday gift ever? Jill Evans’ husband kept the restoration of this Austin 7 Boat Tail a secret for an entire year 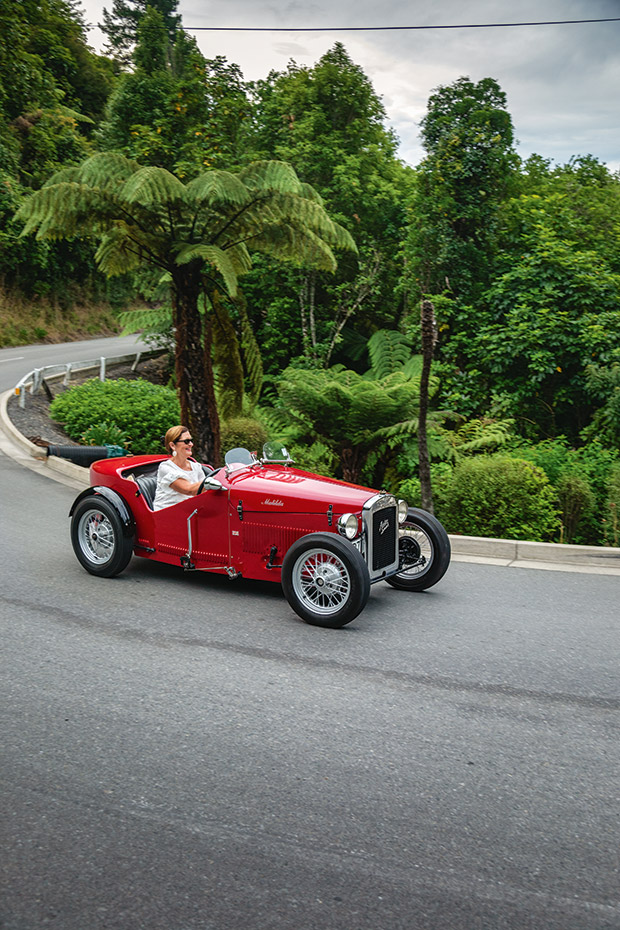 Seven is a lucky number in many cultures, and Jill Evans knows it for sure every time she steps into her Austin 7 Boat Tail.

Mark Evans’ friends are a tiny bit miffed with him. He bought his wife, Jill, a dear little car for a significant birthday and set the bar so high for such gifts that there could well be ructions in other households.

Not only that, but he used the significant birthday as an excuse to indulge himself in his enthusiasm for old cars — and got away with it. That was another cruel blow for his mates.

But he did have a significant advantage; Jill doesn’t simply accept that Mark can’t help himself when it comes to his passion for old cars, she is also smitten with them. So it is remarkable that Mark managed to keep the year-long restoration of a little red 1935 Austin 7 Boat Tail a secret from her in a small town like Picton. He probably thought he had given himself away a hundred times, but Jill didn’t have a clue, not even a smidgeon. The vehicle was hidden on the other side of town, but that is not very far in a town the size of Picton. Those working on the car didn’t say a word for fear an adjective might get caught up on a passing Marlborough breeze and whisper past Jill’s ear as she sat drinking coffee at Le Café, her favourite pitstop on the waterfront.

They weren’t told who it belonged to either and were ushered smartly on their way. Somehow the secret to keeping a secret was cracked, though nobody knows quite how they achieved that, they were all so excited about the project.

The car that was to become Matilda — in honour of Jill’s mother — was a sorry sight when Mark picked her up from the ferry after her journey from the North Island. She was shabby and bruised and sported a battered roll-bar and full racing harness, indicating she had been hurtled around a few racetracks. 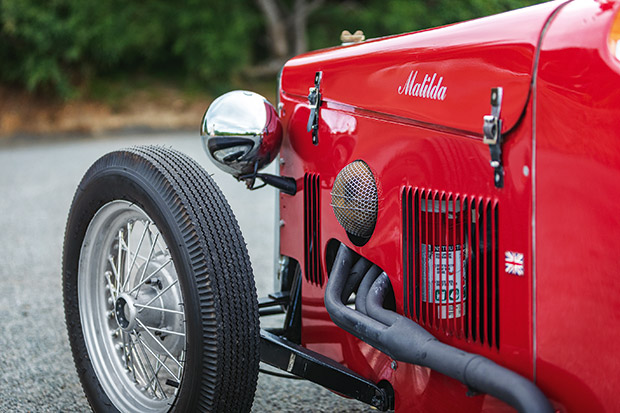 Matilda was a mess, but Mark loved her immediately and unconditionally. He dragged her sorry butt up to Seafarer Marine Engineering where she had the sort of makeover that humans pay enormous sums for in clinics with prestigious addresses.

Her engine was re-bored, her head planed. There were new-to-her valves, pistons, rings and bearings, a radiator and a reconditioned SU carburettor, and she already had a Jack French cam. This was a bonus as British A7 car boffin French was considered the most influential builder of A7 Specials in the 1950s/60s, creating Simplicity, said to be the most famous Austin 7 Special of them all.

Matilda also benefited from the expertise of a local boffin, Blenheim’s Graeme Fineran, who Mark describes as an old-school precision engineer with excellent knowledge of the deficiencies and vagaries of vintage castings and the “cans and can’ts” of such work. Matilda’s entire engine is made of original Austin parts, mostly supplied by Peter Woodend from Classic Tyres in Tauranga, who has an extensive parts catalogue and what he doesn’t have he can import from Britain. The ease of being able to source parts locally was a massive bonus in the restoration of Matilda; her only new part was the electric water pump Mark installed to overcome heating problems.

More stories you might like:
How a former shearers' cookhouse on the East Coast became a peaceful bach escape for the Shanks family

She may have had her guts ripped out, but she never lost her heart, which was all too obvious when she finally had her new red coat put on and her name painted on in gentle cursive — Matilda.

Jill had some friends over for that significant birthday, and Mark called them into the carport. There was Matilda, all bashful in her polished new livery, peering at Jill over the top of her twin aero-screens. Like Mark, Jill fell immediately and unconditionally in love. 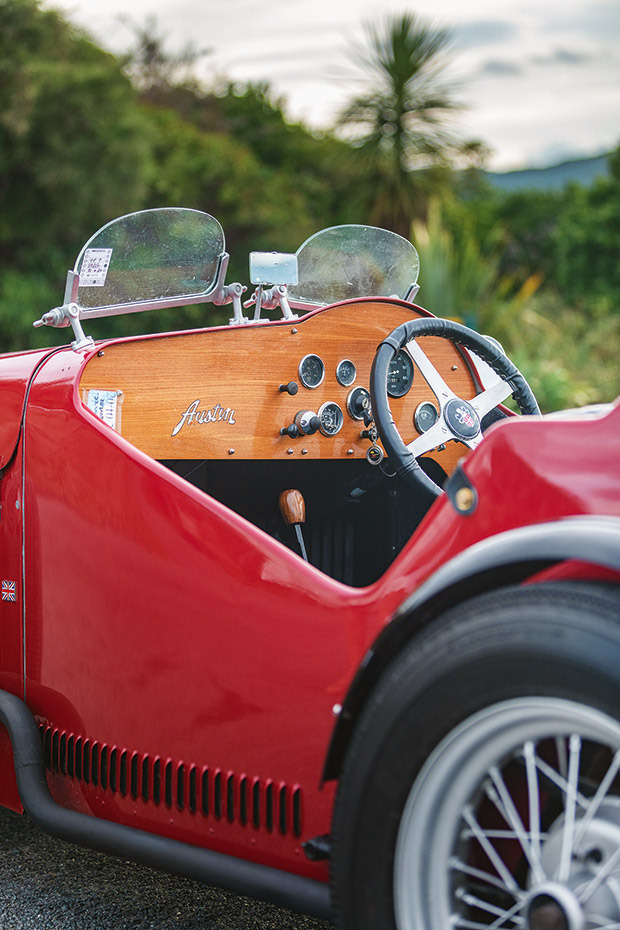 It took her a few goes to get used to Matilda’s clunky gear shift. It had been more years than Jill cared to remember since she had stick-shifted her way around (in an old VW Bug), but it came back to her with a bit of practise. She also had to learn to step firmly on the brakes because they weren’t hydraulic, and there was a bit of arm-waving going on because there wasn’t an electric indicator.

That was five years ago, and now it’s hard to imagine Picton without Matilda. Passengers off the inter-island ferries and the cruise ships take photos and ask to sit in her. Being roofless might make Matilda a fair-weather car, but never a fair-weather friend. Of course, she and Jill have had their ups and downs although, perversely, the downs have been the ups; hills are not Matilda’s thing. Jill has a friend living at the bottom of a steep drive. It took Matilda several runs at it before she got a grip and staggered to the top, Jill and her friend in fits of laughter.

Another time, Matilda boiled labouring up a hill on route to Blenheim. Jill had to coast down the other side where fortunately there was a camping ground where she got some water while Matilda cooled off in the wind. There could have been a solution to the hill problem, but Jill wasn’t up for trying it. She saw an advertisement for a gathering of Austins in Havelock, just under an hour and several hills away. Much to Jill’s surprise there was another Boat Tail there, this one owned by a lady who had raced the vehicle at the famous Silverstone Circuit in England before shipping it to New Zealand.

“What you need to do,” advised the woman, as a hot and bothered Matilda ticked over quietly, cooling down, “is add some Avgas (aviation fuel) to your mix; that will take care of the hills.” Jill wasn’t sure whether to be appalled or amused. She does have a little leather driving helmet, but she wasn’t at all keen on turning it into a flying helmet. Matilda has been the wedding car for two of Jill’s four lanky sons, knees up to their chins in the bucket seats, and there is rarely a family event in which she is not included. The name Matilda means strength in battle and fits Jill’s tiny car perfectly: Matilda, battler of Marlborough’s hills.