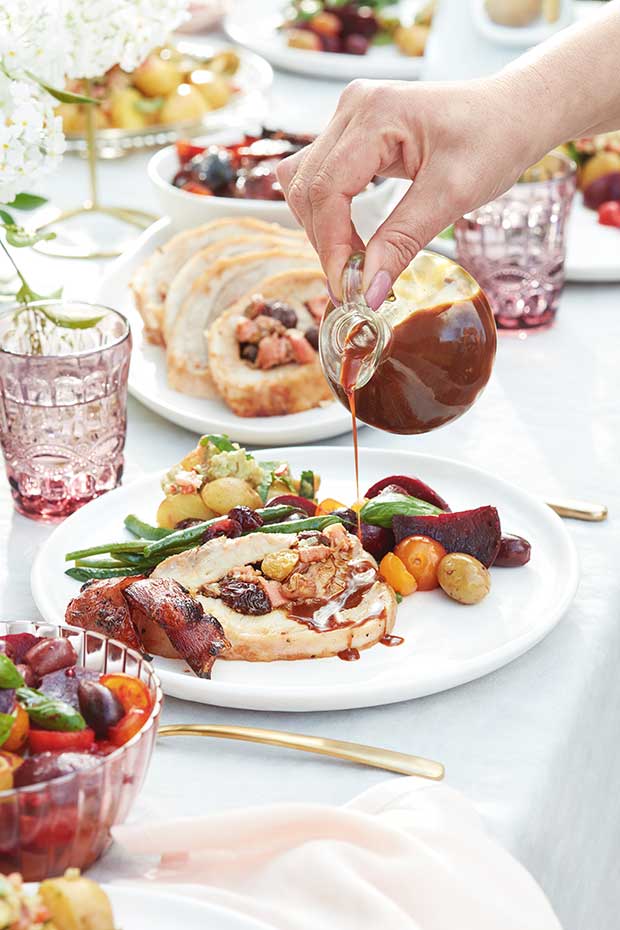 Ask the butcher to leave the belly attached to the loin but to remove the skin, leaving as much fat as possible on the meat. Keep the skin to wrap the loin for great crackling and easy carving. 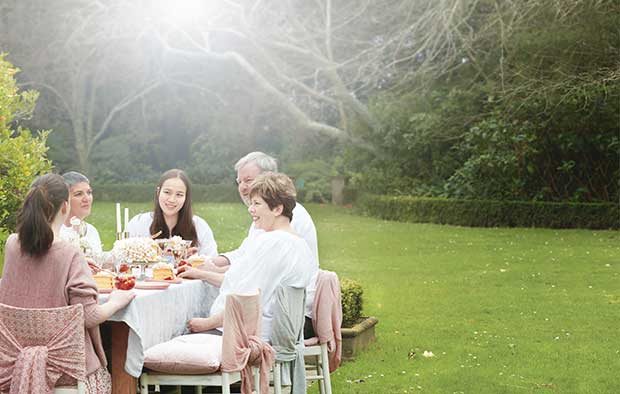 To make the stuffing, place the raisins in a bowl, add the sherry and soak for 15 minutes. Melt the butter in a heavy-based pan over medium heat, add the shallots and cook for 4—5 minutes until soft, then add garlic and cook for 2—3 minutes or until soft. Add the raisins with their sherry liquid, rosemary, lemon zest and juice, and cook for 3—4 minutes until most of the liquid has evaporated. Remove from the heat and add the guavas, salt and pepper. Stir to combine and cool.

Preheat oven to 180°C. Place the pork, fat side down on a board and cut in half horizontally to three-quarters of the way through the meat. Butterfly out so it is of even thickness. If not, cover with a plastic bag and, using a mallet, pound till even. Spread the stuffing evenly over the pork. Starting from the loin end of the pork, roll it like a swiss roll. Wrap the skin around the pork loin and tie with kitchen string. It can be placed in the refrigerator overnight.

Lightly grease a roasting rack with baking spray and place into a roasting tray. Add ½ cup of cold water. Place the pork seam side down onto the roasting rack above the water. Cover the whole tray with lightly oiled foil (oiled side down). Cook for 1½—2 hours (dependent on the weight) until the internal temperature of the pork reaches 55°C, or, when a skewer is inserted, the juices run pink as opposed to red and the skewer is warm when removed. Brush the pork skin all over with Honey Glaze.

Cook uncovered for a further 30 minutes, basting every 10 minutes until the internal temperature reaches 68°C, or the juices run clear and the skin is golden brown and crispy. Remove from the oven and rest at room temperature under foil and tea towels for 30 minutes. Pour the juices into a small bowl, skim off the fat and add to the Pork Jus. To serve, remove the string using scissors. Move the skin to a board and, using scissors, cut it into portions. Carve the pork into thick slices and serve hot with Pork Jus and crackling. Serves 8