Lynda Hallinan gets all her ducks in a row and bakes her grandma’s favourite cake.

You can keep your cats and your dogs, your chooks and chinchillas, kunekune and guinea pigs, bunnies and budgies, turtles, tadpoles and amphibious axolotls, because today we’re going to talk about the delights of keeping ducks.

Ducks make marvellous pets. If you could housetrain them, I’d go so far as to say that they are perfect pets, but sadly they crap everywhere — and I mean everywhere — they waddle.

Nonetheless, I am rather fond of ducks. I am fond of them sunning themselves in my garden and swimming in the wetland below our house. Unlike free-range chooks, who obliterate everything within beak reach, pet ducks clean up only the slugs and snails while accidentally flattening your favourite plants with their disproportionate derrières. 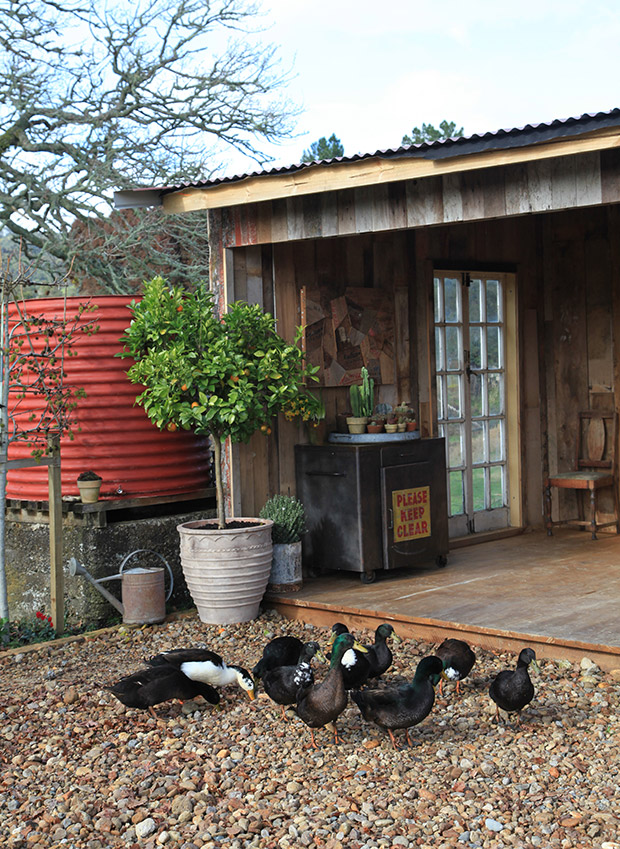 I am really rather fond of ducks. I am fond of them roasted and rolled in steamed pancakes with cucumber matchsticks and hoisin sauce, or curried with grapes and cherry tomatoes, or slow-cooked in a tray of fat flavoured with thyme, rosemary, juniper berries and bay leaves to make duck confit.

I may have inherited this fondness for ducks from my maternal grandmother, Clarice Annie Cornes. Clarice kept khaki campbell ducks and black orpington chooks in a big run in her Raglan backyard, beside the towering puriri tree and behind the outhouse.

In my grandmother’s day, heritage hens weren’t the reliable layers that modern brown shavers and highlines have been bred to be, so many farmers’ wives kept ducks as well as chooks. Duck eggs, being larger and richer than hen eggs, were generally reserved for baking.

After they’d laid their eggs each morning, Clarice’s chooks and ducks were let out to forage and fluff about in the boggy house paddock, before being called back in to be fed in the evening. If the ducks had too many ducklings, my grandfather Albert would kill a few off and Clarice would serve roast ducks (there were eight mouths to feed) for dinner.

I suspect my husband Jason is itching to kill off all my ducks, too, as my fondness for ducks is tempered by his begrudging hostility for anything tame with feathers. He hasn’t liked ducks for a decade now. Duck eggs are larger than hen eggs, with eerily translucent shells that almost appear to glow from within. Photo: Lynda Hallinan

In 2011, I adopted some pekin ducklings during my biennial jaunt to the Garden Marlborough festival. They came home with me in a pet box. (Air New Zealand’s baggage rules allowed for caged birds, though the aghast reception I received at the check-in counter made me reckon those rules were designed for canaries and budgies.)

My pekins were friendly but weren’t particularly smart. They took to sunbathing on our roadside verge where they were run over, one by one. More recently I replaced them with a clutch of flightless cayugas who, if I call out “quackers”, all come running for a bowl of Chook Chow.

Unfortunately, they also go running if they think there’s a free feed to be had anywhere else. Last year, they set up camp at the nearby YMCA Camp Adair, so I relocated them to our farm dam, only for them to duck upstream, where they made themselves at home in the chook run belonging to our neighbours, Geoff and Elizabeth. I hauled them home; they waddled back through the boundary fence. I moved them to the waterfall pond at the bottom of our farm; they waddled back to Geoff and Elizabeth’s. I defy anyone not to fall in love with day-old ducklings; these feathered fluffballs grew up to be teenage runaways. Photo: Lynda Hallinan

And on it went until, in desperation, I suppressed their wanderlust by locking the lot up with my chooks. Bonus: four duck eggs a day!

It was as if the universe was trying to tell me something, for Clarice, a lifelong member of the Women’s Division of the Federated Farmers, was famous for her prize-winning duck-egg sponge sandwiches.

The universe was obviously also trying to tell me to stop using my kitchenware in the garden. It turns out I’d rusted my sponge sandwich tins while using them as saucers for my son Lucas’ carnivorous plant collection, so I had to improvise with a pair of not-quite-matching springform cake tins. These tins were a smidgen too big, resulting in a thinner sponge sandwich than Clarice would approve of, though I noticed there were no complaints from my husband.

In the good old days, eggs were weighed in their shells to determine the quantities of sugar and flour required by a baking recipe. In the kitchen at Alberton House, the historic 1863 Auckland homestead, you’ll find an antique individual egg weigher – yes, there was such a thing – designed for this purpose.

Grandma’s original recipe required four duck eggs plus the weight of 3 eggs in flour, and two eggs in sugar, but I’ve adapted it below, adding a luxe layer of buttercream icing rather than her miserly sprinkle of icing sugar on top. As Lynda’s cakes baked, she scooted around her garden picking miniature roses to decorate them with, then phoned her friend Deanna – aka the local Cupcake Queen – and asked if she’d fancy popping over (with her icing piping bags and nozzles, please) for afternoon tea. Photo: Lynda Hallinan

Preheat oven to 180°C. Line the base of two 20cm sponge sandwich tins with baking paper. Grease the bottom and the sides with butter, then dust with 2 teaspoons sugar mixed with 1 teaspoon flour.

Crack the eggs, one by one, into a bowl. Duck eggs are considerably harder to crack than hen eggs; they need a strong and strident thwack against the edge of your bowl to liberate the contents in one go without ending up with shards of shell, which tends to shatter like safety glass.

Use an electric mixer to beat the eggs and sugar for 10 minutes until pale, thick and fluffy. Sift flour and baking powder and fold in gently but quickly. Divide mixture equally between the two tins and bake for 15 minutes, until golden and springy.
When cool enough to handle, remove the sponges from their tins and cool on baking paper on baking racks.

For the icing, beat the butter then stir in cream, icing sugar, vanilla essence and a drop of food colouring. To serve, slather plum or strawberry jam over the top of one sponge then add a layer of sliced strawberries and whipped cream. Gently place the second sponge on top and decorate with piped swirls of buttercream icing and edible flowers.