Lynda Hallinan’s Blog: The cat that came in from the cold


It takes sheer luck get a cat that looks like a unicorn and purrs like a Tesla.

Cats, according to the fantasy and horror fiction writer H.P. Lovecraft, are the “runes of beauty, invincibility, wonder, pride, freedom, coldness, self-sufficiency, and dainty individuality.”

Anyone who has ever owned a cat, or even taken temporary possession of one, would agree. For as the wise Mr Lovecraft declared, our feline friends embody “the qualities of civilised men” – and surely women – being sensitive, enlightened, cynical, poetic, philosophic, dispassionate, reserved and independent.

The best cats also have a habit of showing up uninvited. These waifs and strays come and go as they please, stopping in for pats and snacks, until, one day, you realise they’ve made themselves at home.

Like hairy squatters, they sidle into the nearest sunny spot – an empty plant pot, a cardboard box, a vacant lap – and before you know it, you’re adding big bags of kitty litter and tiny tubs of salmon terrine to your grocery trolley, and planting clumps of catnip (Nepeta cataria) and cock’s-foot grass (Dactylis glomerata) in your garden. A British study of cat owners found that as many of 20 per cent confessed to having been adopted by their cat, rather than the other way around. When I was a student, one such cat joined our flat.

The day we moved in, there he was, a giant doorstop of pale ginger fluff, sitting on the front step, waiting for us to turn the key. We called him Fatty, for obvious reasons, though a few months later we found out that he’d belonged to a previous tenant who must have drunk weak turmeric or saffron tea, because apparently his real name was Teabag.

I might be a wee bit biased but, almost 20 years after his death, I still consider Fatty to be the finest example of Felis catus ever to stalk this earth. He was The Best Cat That Ever Lived™ and he wore a silver ribbon to my sister’s wedding.

Fatty was cuddly and cranky and couldn’t give two hoots for the usual rules of human-pet cohabitation. He slept on the bed every night and if he wasn’t getting his requisite pre-snooze pats, he’d grab a corner of the duvet in his jaws and walk backwards until he’d stripped the bed. Sometimes he’d bite our ankles in the night, just for giggles.

When we moved out of our student flat, Fatty moved to my parents’ farm, where he spent 10 good years catching rats and rabbits before skin cancer claimed his pink nose and then, gradually, the rest of him.

All my other cats were SPCA rescues. Most had undiagnosed mental health issues. All lived to a ripe old age. The last one died two years ago. After two whole years with no cats, no litter trays, no $500 vet bills to stitch up war wounds inflicted in scraps with the neighbour’s cats, we got a puppy instead. A goofy, gormless, greedy labrador to keep our old border collie company. 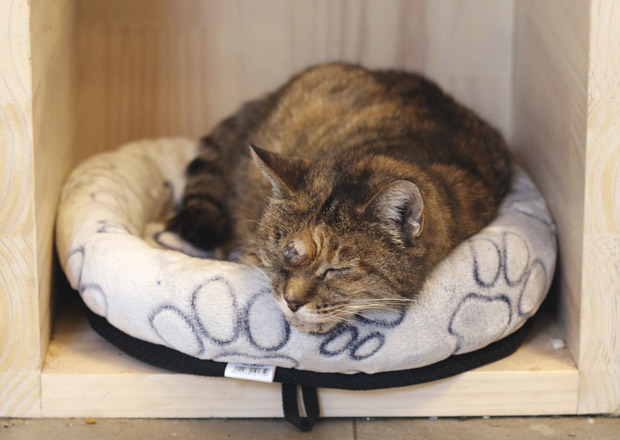 I’ve always been a cat person. (The most I’ve ever owned at any one time was six. I was single then. The two events are possibly connected.) But dogs aren’t bad either. Especially if you treat them like cats. Really big cats. I let our labrador sleep on the bed and sit on the couch.

He takes up half of both now, and is a terrible pillow-hog. But as Mark Twain once said, “A home without a cat — and a well-fed, well-petted and properly revered cat — may be a perfect home, perhaps, but how can it prove title?”

In autumn, I went to help a friend dig up some dahlia tubers from her childhood home, and came back with a tabby cat. No one knows this cat’s complete backstory. A few years ago, she appeared in a field of chillies, befriended the chilli farmer, and followed him around his crops. But when he died suddenly, she needed a home, and we happened to have one.

She’s no great looker: an elderly, underweight tabby with a giant tumour on her forehead and deformed front paws that point sideways in a permanent ballet pose. But when I got her home, my kids took one look at her scrawny frame and tuberous face and declared love at first sight. We’ve named her Chilli. She’s the ultimate low-maintenance cat. Having lived most of her life outdoors, she’s quite content to see out her days indoors. For three months, she refused to budge from the pet bed in our bathroom. She sleeps at least 23 hours a day, loves cuddles, purrs like a Tesla and dribbles like a tap.

Then: catastrophe! A violent seizure, so loud that the sound of her thrashing on the bathroom floor woke me up. As I stroked Chilli’s wee convulsing body while our dogs held a nervous vigil at the bathroom door, I had a sudden realisation. Once a cat person, always a cat person. “Please don’t die,” I whispered as I drove her to the vet.

Two days, two seizures, bloodwork, observation, but no definitive cause, aside from the lump on her face. I didn’t want to prolong any pain, so I booked her in for a one-way trip back to the vet’s, on Saturday at 11am. But on Friday night, she climbed onto my bed for the first time and went to sleep with the dog. On Saturday morning, my son Lucas suggested we give her another chance. Just one more day.

That was a week ago. Chilli’s going nowhere, although she’s not the same cat. She’s better. Her frontal lobe must have taken a beating, for she’s lost all her inhibitions. She’s exploring the world and ignoring the dogs, although I’ve had to move her back to the bathroom so I can wash the dribble stains off my bedsheets.

Cats, said the American broadcaster and author Garrison Keillor, are intended to teach us that not everything in nature has a function. Sometimes it’s enough to just be there, hanging out together, sharing each other’s warmth on a winter’s day.