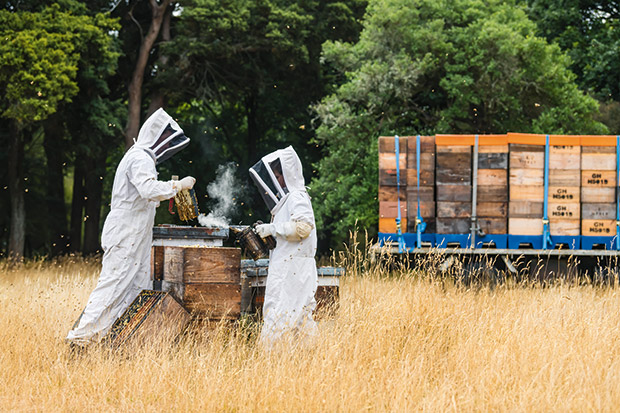 The fifth generation of a Wairarapa beekeeping family is producing high-grade honey fit for the breakfast table and the medicine cabinet.

Alex and Karly Polaschek’s Wairarapa home, just past the landmark Tauherenīkau pub, has been overtaken by bees. Within its walls are stacks of colourful fabric squares ready for spreading with amber-hued beeswax, boxes crammed with glass jars of creamy honey, and various stickers, testers and sample pots, all of which create the domestic muddle familiar to small-business owners.

Together, Karly and Alex (and their children, Kate, 8, and Ben, 10) are Greytown Honey, producing various grades of award-winning mānuka, wildflower, kāmahi, and multiflora honey, along with a range of cosmetics, candles, lozenges, and wraps.  Alex is new to bees – he was a machinist in the air force – Karly is her family’s fifth-generation beekeeper. The family’s early-20th-century entry into beekeeping is a little lost in time, but Karly believes it starts with an underage great-great-granddad who wanted to have a few pints. 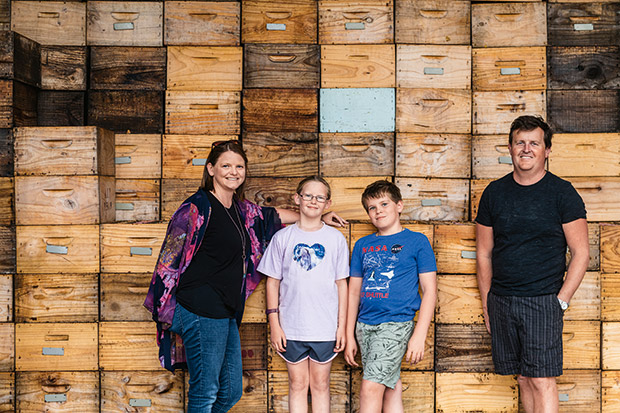 “I remember Dad talking about how, back in England, Aaron Simmonds made honey mead to sell to the local pub so they’d let him drink.” The love of bees passed through the generations, including to Karly’s builder dad, John Simmonds, who took up bees as a hobby, going full time after a stroke, from which he largely recovered.

Nine years ago, Karly and Alex moved to Greytown to help John run his honey business, Simmonds Honey. “We came with the view that we would work alongside him, with him mentoring Alex. But with us here, Dad loved beekeeping again, so we started our own business.”

John gave the couple 20 hives, which they split and split again; today they have 1000. When the hives are full in summer, that’s about 80 million bees under their care, which isn’t many – apparently. But it’s enough to be more than a full-time job; one Alex and Karly largely fulfil themselves, occasionally calling on seasonal labour during the honey harvest, which can stretch from November to March. 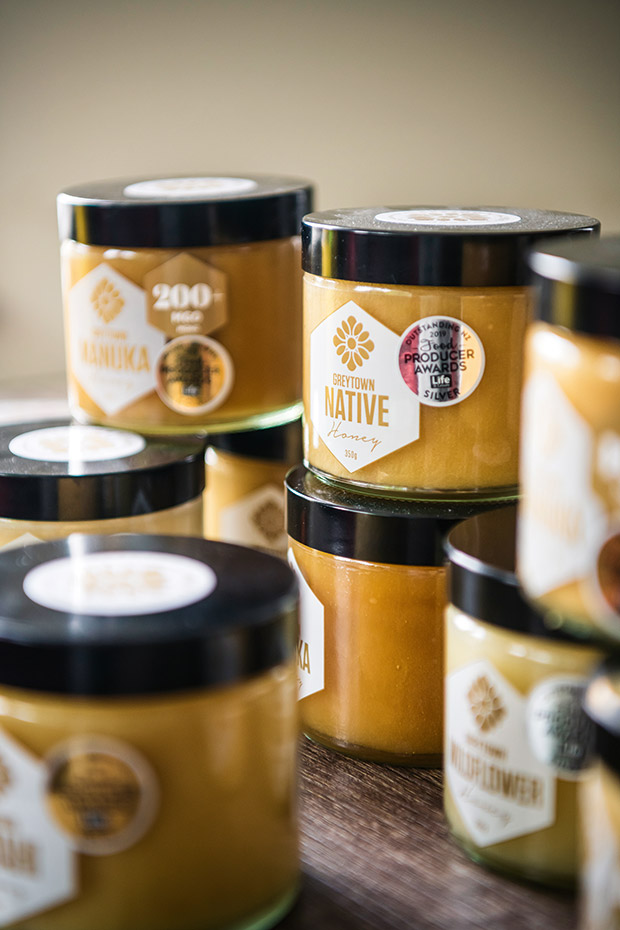 Greytown Honey comes in glass. “There was no one else using glass when we started,” says Karly. “Ben was in kindy then and was learning about plastic’s effect on the environment, so I didn’t feel it was the right thing to use the cheap option and pack in plastic.”

If awards are anything to go by, they’re nailing it: Greytown Honey won three gold, two silver and two bronze medals in the 2019 Outstanding New Zealand Food Producer Awards, with its kāmahi, mānuka 200+ MGO and 400+ MGO honeys winning gold.

Their success is even sweeter, given that a good harvest is entirely weather-dependent. A warm summer means the trees and flowers produce lots of nectar, while a chilly one means less.

“If you compare honey with other farming, a sheep farmer’s returns are dependent on lamb prices, but they will always have lambs to sell. For us, we also have price fluctuations, but in a bad season, we’ll have almost no honey to sell. The last couple of harvests weren’t amazing, and one recent summer was so hot the mānuka bushes went into survival mode and dropped their flowers,” says Karly. Ten-year-old Ben takes an active part in the family’s bee business and has his own hives, saving his sales for future flying lessons. The smoke masks the pheromones the bees secrete to indicate the colony is “under attack”, allowing beekeepers to work without coming under attack themselves.

Happily, the past harvest was good as the Wairarapa had an abundance of nectar-producing blooms. Their hives produced 29 tonnes of honey – about twice the harvest of the past few years, which was collected, pricked, filtered and creamed. “We couldn’t get the honey off as fast as the bees were bringing it in,” says Alex. A lot of it tested as monofloral mānuka, significantly upping returns.

But an already tough job wasn’t helped by the Covid-19 lockdown, imposed when the harvest was far from finished, and the Polascheks’ seasonal labour opted for a repatriation flight to Germany. “We had to push on alone. My mum was in our bubble, so on big days the children stayed home with her and Alex and I got the honey off and processed. With all our farmers’ markets cancelled, it was doable with just the two of us,” says Karly.

After lab-testing each batch’s chemical markers to decide the dominant pollen [see above], Alex and Karly taste them to decide what honey will be bottled into glass and sold under their premium Greytown Honey brand. The rest is bulk-sold to other honey suppliers for export. The pair want to sell more of their own honey to reduce the risk of relying on bulk sales, partly by expanding overseas markets and launching a new cardboard-clad supermarket-ready brand, New Zealand Eco-Honey. “We packed our first honey in 2011, offering a very basic range, and concentrated on bee health and building our knowledge,” says Karly.

“Then we built our own honey factory, with all the necessary compliance, and spent another year further perfecting our honey processing. We finalized our Greytown Honey branding, which is focused on the gift and tourist market. Then, for the past couple of years, we’ve concentrated on the lifestyle shows, talking to our customers and getting feedback. This year, along with our Eco-Honey brand, we were going to go all out for the export market, starting with Australia, Germany and Japan.

“We are getting some honey into Japan, and we are still planning to launch New Zealand Eco-Honey, but Covid-19 has made it significantly harder to get traction.” “Now, 2021 will be the year in which we focus on expanding. We need a bit of a breather after the massive 12 months we’ve had.”

A year that also included the loss of Karly’s dad. “Last year was a horror. We had our worst-ever harvest; then I had open-heart surgery. And then, just before Christmas, we lost my dad. Because we’re a small business, we can’t just stop, especially because our bees are like pets and you can’t just walk away from your pets. But that time we spent with Dad showed us that family is more important than anything.”

Says Alex: “We’ve always said we do this so we can spend time with the kids. With beekeeping, while the only time we can take our ‘summer holiday’ is June or July, there’s flexibility, so I can now go to sports or beach days and be parent help.”

Both Ben and Kate are involved in beekeeping. Kate loves animals, but she’s not that fond of bees, so she mostly helps out by making beeswax wraps – the profits from which are donated to local charities, including the House of Science, which puts science kits into primary schools. Ben has his own bees and sells the honey, stashing away the cash to pay for pilot lessons far in the future.

While the kids are involved, collecting honey is far from child’s play, as each full honey box weighs about 40 kilogrammes. “It’s not for everyone, this work,” says Alex. “We have to be on the lookout constantly for american foulbrood bacteria and varroa mites. Then, during the harvest, we’re lifting heavy boxes in the sun, surrounded by bees. I’ve been stung at least six times today and thousands of times over the years.” An allergic reaction could strike at any time, so an EpiPen is always in the truck. Alex alerts hive-hosting farmers when he’s going in and notifies Karly when he’s out. The fact that all their hives are within 40 minutes of the house makes it a bit quicker to get help.

Beekeeping is not for the faint-hearted, but nearly a decade in, Alex is delighted with his career move. “It’s great. I’m outside all day, while being my own boss.”

And Karly loves the lasting connection beekeeping gives her to her dad, and her ability to educate the public – not only the schoolchildren she visits with an observation hive but also the market-goers who sample the honey. “Bees have such an integral pollinating role in our food supply, so it’s wonderful how attitudes to them have changed.”

Most New Zealanders judge mānuka honey by its “unique mānuka factor” grading, or UMF. The higher the rating, the higher the amount of mānuka pollen in the honey and the higher the price. But UMF is a trademark and, as small producers, Alex and Karly Polaschek can’t afford the licence they must buy to add a UMF grading to their labels. 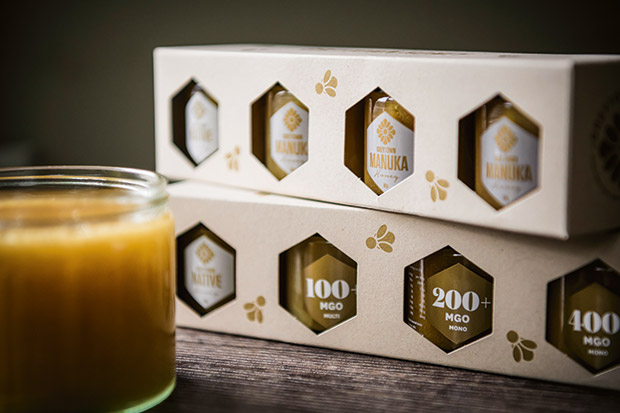 Instead, they signpost the honey’s MGO rating — that’s methylglyoxal, a naturally occurring compound in mānuka. The higher a honey’s MGO, the more mānuka pollen — with its medicinal properties — in the honey, and, again, the higher the price. Greytown Honey’s 400+ MGO honey sells for upwards of $80 for 350 grammes and down to $30 for its 100+ MGO. Compare that with other kinds of honey dominant with clover, kāmahi or rewarewa, which fetch only $18 for the same quantity.

“People happily buy the top MGO honey,” says Karly. “While they’re unlikely to spread it on toast, some will have a teaspoon a day, or reach for it when they feel off-colour. I can personally attest to its value in wound care.”

Varroa mites and american foulbrood are now a constant threat to New Zealand’s beekeepers, the Polascheks’ 1000 hives included. Alex and Karly’s loss to varroa has been minimal, but Karly says that when the mites first hit in 2000, her dad lost an alarming number of hives in six weeks.

“The reality is we live with the fact we’ll never have a hive without varroa, so we just have to manage it. For a bee, it’s like having a rabbit clinging onto your torso — that’s how big the mites are. We manage it by using chemical strips in the hives when there’s no honey, which will knock down varroa by 90 to 95 per cent. Then we use organic treatments to stay on top of it,” says Alex.

American foulbrood (AFB) is much more devastating as a hive infested with the bacteria must be burned, along with everything used on it.

“We’ve been lucky to have had very low levels of AFB, but there was an outbreak in the Wairarapa last year, so that will affect us for a while,” says Karly. “We prevent it by not moving our hives around, keeping track of the honey boxes, using disposable gloves, and sterilizing equipment. When we have to burn a whole hive, it’s just terrible. That’s a crying day. So much hard work, just gone.”

Honey making rules and regulations: 5 important things to know if you want to sell honey in New Zealand